In the family of the starling there is a special kind of highly social creatures — a pink starling. You can rarely see a single bird, they are kept in groups of dozens, or even hundreds of individuals. In flight, they look like an unusual pink cloud. Although birds are close relatives of ordinary starlings, they have a special character and way of life. 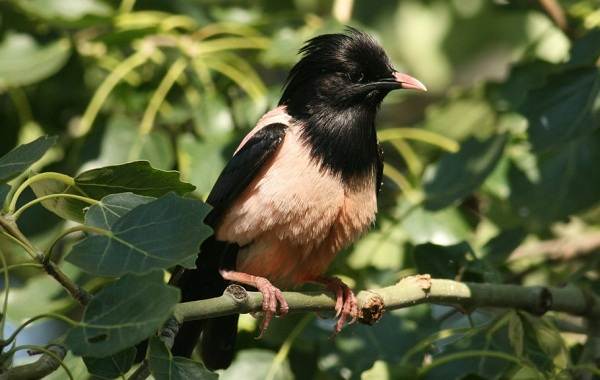 The name of the bird reflects the main feature — the pastel pink color of the plumage of the breast, abdomen, sides, back. Contrasting black color with metallic shine covers the head, all neck, upper chest, wings, tail starling.

The greenish-violet tinge is manifested on the flight and tail feathers. After moulting in autumn, a gray shade appears in the color of birds on black, sandy on pink. The feathering style is often compared to a black sheep, only it has a black-and-gray color scheme.

The pink starling in the photo looks like a teaser. On the back of the head, elongated feathers form a funny crest, which is more pronounced in the male. The tail is short. The beak of a pink representative of relatives is thicker and shorter than that of an ordinary species. 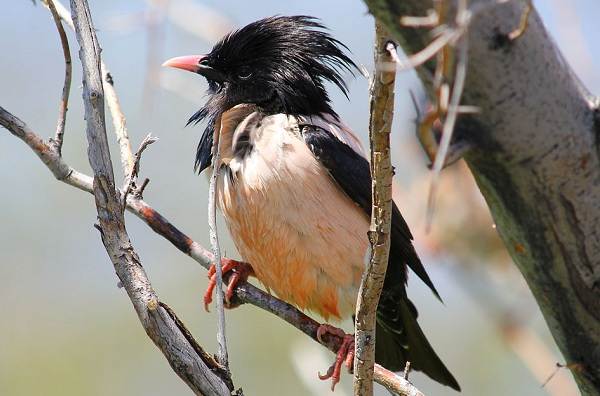 Its color varies from dark pink in winter and spring to black and brown in summer and autumn. The shape of the beak is pointed. Appearance of males is brighter than that of females. Young birds do not shine with colors — plumage is gray-brown above, sandy — from below.

The size of adult birds is the same as that of other starlings — the body is 19-25 cm, the wingspan is about 14 cm, the mass of the individual is up to 90 g.

It is known that a pink starling is considered a public bird for giant flocks. Huge communities form colossal colonies. In the summer, hundreds of starlings move and feed in large flocks, spend the night in separate groups.

In winter, communities include tens of thousands of individuals, sometimes mixed with other birds: crows, sparrows, and ozherelovymi parrots. Aggression between them does not arise. 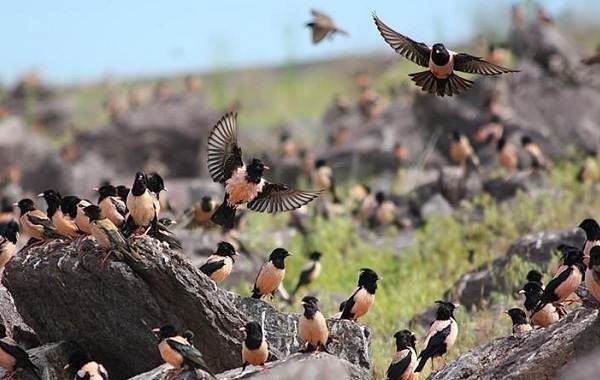 In comparison with ordinary starlings, pink birds are very mobile, overcome considerable distances, returning to their former places. In flight, due to frequent sweeps of the wings develop a high speed.

In their habits, like the relatives of pink starlings, they run with their nodding head, scattered on the ground, in search of food.

Hunting of birds is organized. Bird’s cloud, like ranks, moves in one direction, snatching out prey from the grass stand: locusts and grasshoppers. The distance between the birds is about 10 cm. There is enough forage for everyone, including young offspring. Friendly companies, as a team, move to a new location. 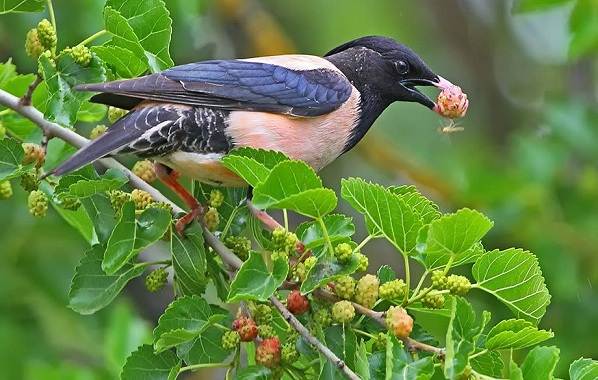 The genus of the starlings has more than 10 species of birds, similar in lifestyle. A pink starling is one of them. Sometimes it is confused with a close kind of Brahminic kinsman, who is distinguished by a light brown color with a reddish tint, skin areas without plumage behind the eyes and more rounded wings.

Both species are similar in lifestyle, but the Brahmin congeners are more likely to be seen in human habitation.

The bird is a pink starling well known in Central Asia, in the southeast of Europe. In Russia, birds are found in northern Siberia, the Caucasus, and the Crimea. Winter is spent in the south of Europe, in North America or India.

The birds return in the early spring, when there is still snow in places, but the marriage time begins at the end of April, when other young birds are already growing chicks. 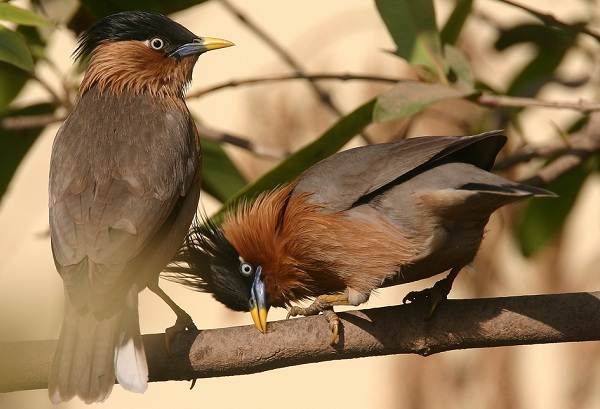 Nesting time, pink starlings spend in steppe, semi-steppe zones, desert plains of Afghanistan, Iraq, Iran. The area can change in conditions of seasonal fluctuations and the availability of a sufficient forage reserve. Wherever the pink starling dwells, there are necessarily cliffs, rocks, steep banks of ponds.

Colonies feathered need steep niches. Nests they arrange under the roofs of buildings, in the crevices of rocks, cracks in the walls, can take a hollow woodpecker or settle in an individual birdhouse. A prerequisite for nesting is the presence of nearby water. Fly for feed birds ready within a radius of 10 km.

The settled colonies of birds need a large amount of food, which both adult starlings and young offspring need. The most favorable period is mid-summer, when the food base is abundant, since the larvae of insects grow to the stage of adulthood. 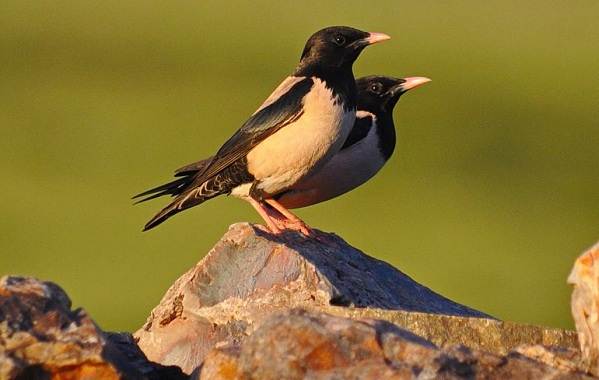 The flight of the starlings is very fast. Between each other the birds are always at a close distance, so from a distance they appear to be a dark cloud. On the ground, they also move swiftly, but do not leave the pack.

The artistic talents of starlings are well known. Ability to copy the voices of other birds, animals, whistles, car whistles is striking in variety. If in a flock of starlings croaking of a frog, mewing of a kitten or chowing of a hen is heard, it means that the birds have visited a person’s house or stayed at a pond with local inhabitants.

There are cases when migrant starlings were returning from the hibernation and «talking» with the voices of tropical birds. Ornithologists notice that the pink starling’s own voice resembles a rattle, a twiddle, a creak, there is no melody in his singing. 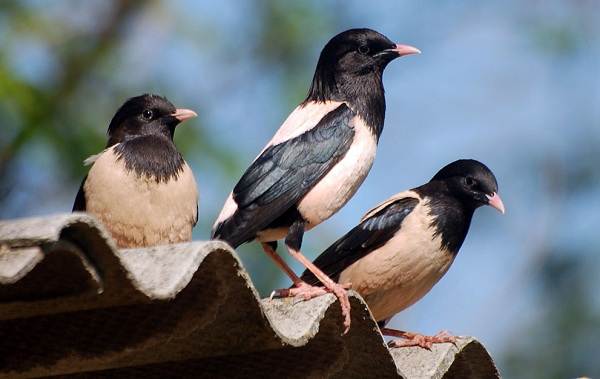 Where pink starlings live, there must necessarily be an accumulation of insects, otherwise large flocks of birds can not feed themselves. For huge colonies, a good fodder base is required, but they also act in concert together: they shout loudly and bellicosely circle.

In human life, flocks of starlings help to destroy agricultural pests. Spring arrival of birds pleases people, embodying the arrival of heat and the revitalization of nature. But the encroachment of feathered for crops cereals, fruits of fruits and berries leads to the ruin of gardens and fields.

Pink starlings are omnivorous: the diet is plant and animal food. The main predilection of birds is the orthopteran insects, especially locusts. In areas suffering from locust invasions, pink starlings are considered one of the most useful birds. 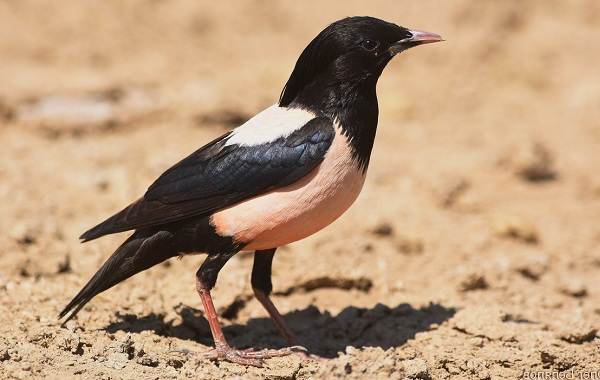 The diet during nesting consists practically of animal organisms: mantises, ants, cicadas, lice, caterpillars. Poultry is harvested on land, much less often caught in the air. It is interesting that in the movement of the flocks along the plain, the closing groups periodically fly over the forelegs.

Thus, in turn the starlings move forward, not missing production on the way. Drak because of the food almost does not happen. On the contrary, the starlings, after detecting prey, give signals of approaching the rest.

After the nesting period is over, more ripe berries, fruits and grains become in the diet. Starlings like to feast on figs, raspberries, grapes, they drink floral nectar. In India, birds destroy rice fields, and in the Caucasus — vineyards

Features of the diet pushes birds on the big trips. The chain of feeding of the pink starling is tied to the main link — the locust. The insect is not adapted to a single existence. Huge arrays move with great speed — up to 40 km / h. Starlings in pursuit become wanderers willy-nilly. 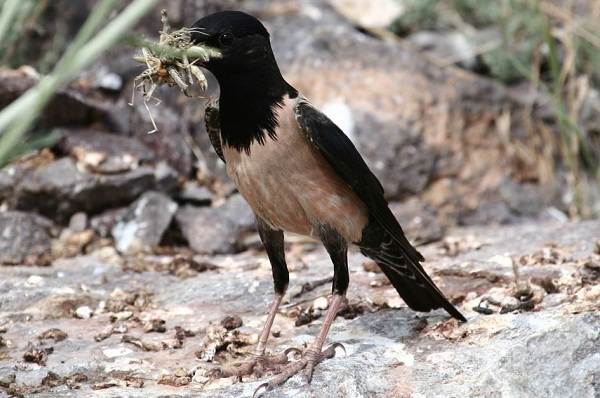 Excess locusts lead to the fact that birds after saturation do not eat the insect, but cripple, tearing apart, and kill. One starling a day requires up to 200 grams of feed. But the passion of the hunter moves the pursuit, without preserving the attachment of the bird to the ravaged places. In Turkey, it is believed that the bird eats only one hundredth locust, and 99 destroys.

The gluttony of the birds leads to the question of whether the number of pink starlings should be preserved. Calculations showed that they bring more benefits than harm. It is important that the birds determine the approach of locusts before the person, they oppose her devastating invasion. The damage from starlings, who pecked the autumn fruits, is much less.

The time of reproduction of pink starlings is tied to the abundance of locusts, depends on the seasonal conditions. Bird colonies proceed to nesting when insect larvae grow by mid-summer. 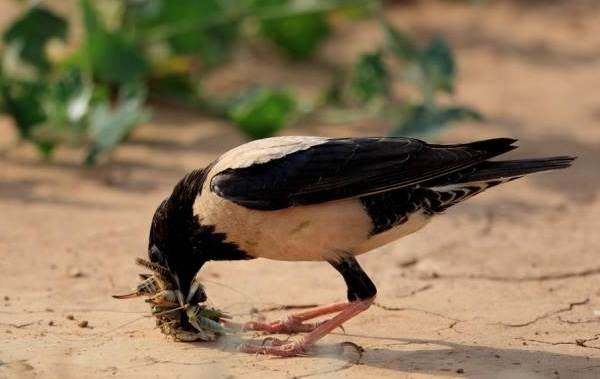 Places of nests pink starlings choose in crevices of rocks, cracks in steep cliffs, in niches of cliffs. In the steppe areas of the nest can be found in the depressions of the earth. In the construction of birds use dry stems of plants, leaves, feathers, grass.

From a distance, rough constructions resemble massive bowls. The nests are very close, almost touching the walls. From a distance such floors of buildings seem like a big mountain of garbage. 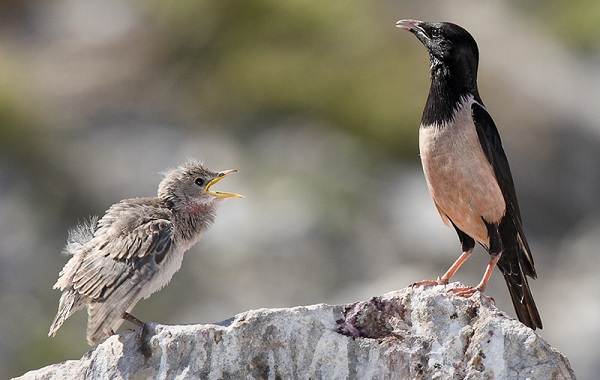 In confusion and tougher food gets to the most agile specimens from all offspring. The stay in the parent nest lasts about 24 days, then the young ones get into flocks and begin an independent nomadic life.

The life of pink starlings in nature lasts 10-15 years. Pets with good care can delight owners twice as long. Birds love for cheerful disposition, the talent of the imitator, which creates a special atmosphere in any house.

Cuckoo is a bird. Lifestyle and the cuckoo habitat