Alligators — descendants of the most ancient inhabitants of the planet

Alligators and crocodiles are very similar to each other as congeners of the order of aquatic vertebrates. What is different from the crocodile alligator, few know. But these species of reptiles belong to rare representatives of the venerated predators, whose genus is tens of millions of years. They managed to survive due to habitat, which has changed slightly since ancient times. 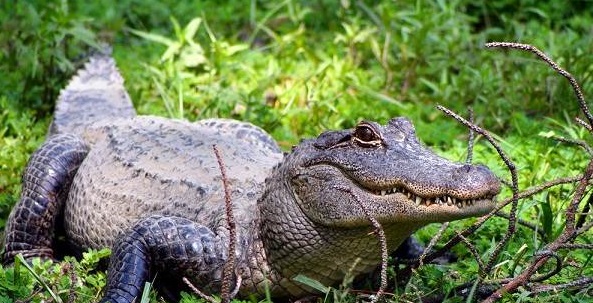 Alligators are only two species: American and Chinese, in accordance with their habitat. Some settled the long coastal zone of the Gulf of Mexico adjacent to the Atlantic Ocean, while others live in a more limited area in the Yangtze River of East China.

The Chinese alligator faces extinction in the wild. In addition to the river, individuals are found on agricultural lands that live in deep ditches and reservoirs.

Alligators are kept in special conservation conditions to save the species, about 200 representatives of which are still in China. There is no threat to reptiles in North America. In addition to natural conditions, they are settled in many reserves. The number of over 1 million individuals does not cause conservation of the species.

The main apparent difference between alligators and crocodiles is in the outlines of the skull. The horseshoe-shaped or blunt shape is inherent in alligators, while in crocodiles the muzzle is sharp, and the fourth tooth always looks out through closed jaws. Disputes, who are more crocodile or alligator, are always solved in favor of the crocodile.

The largest alligator, almost a ton in weight and 5.8 m in length, resided in the US state of Louisiana. Modern large reptiles reach 3-3.5 m, with a weight of 200-220 kg.

Chinese relatives are much smaller in size, usually grow to 1.5-2 m, and individuals 3 m long remain only in history. Females of both species of alligators are always smaller than males. In general, alligator sizes are inferior to more massive crocodiles. 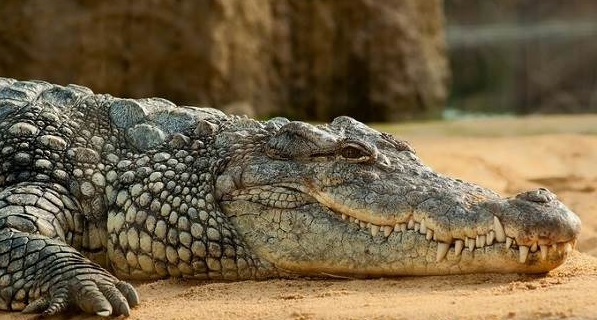 The color of the species depends on the color of the reservoir. If the environment is saturated with algae, the animals will have a green tint. Many reptiles of deep dark color, brown, almost black tone, especially in wetlands, in reservoirs with a tannic acid content. The belly is painted in light cream color.

Bone plates protect the American alligator from the back, and the Chinese inhabitant is covered with them completely, including the stomach. On the short forepaws, five toes without membranes, on the hind limbs, four each.

The eyes are gray, with protection from bone shields. The animal’s nostrils are also protected by special skin folds, which sink and do not let water through if the alligator sinks deep. In the jaws of reptiles from 74 to 84 teeth, which are replaced with new ones after the loss. 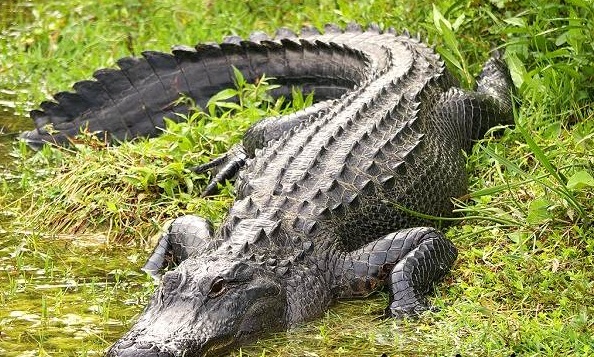 A strong and flexible tail distinguishes alligators of both species. It makes up almost half of the entire body length. This, perhaps the most important functional part of the animal:

Alligators live mainly in fresh waters, unlike crocodiles, which are able to filter out salt in marine waters. The only joint location of relatives is the American state of Florida. Reptiles settled in slow-flowing rivers, ponds and wetlands.

The nature and lifestyle of the alligator

Alligators are loners by the way of life. But only large representatives of the species can capture and protect their territory. They are jealous of encroachment on their plot and show aggression. Juveniles are kept in small groups. 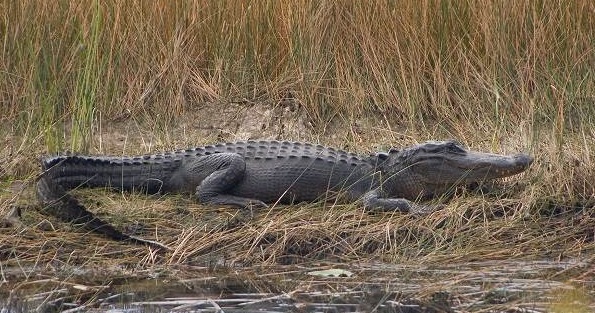 The animals swim beautifully, steering their tail like a paddle. On the surface of the earth, alligators move quickly, running at speeds of up to 40 km / h, but only for short distances. Reptile activity is high between April and October, during the warm seasons of the year.

With a cold snap, preparation for a long hibernation begins. Animals dig holes in coastal areas with nesting chambers for wintering. Deeper up to 1.5 m and a length of 15-25 m can hide several reptiles at once.

Hibernation animals do not receive food. Some individuals simply hide in the dirt, but leave their nostrils above the surface for access of oxygen. The temperature environment for wintering is rarely below 10 ° C, but even frost is well tolerated by alligators.

With the arrival of spring reptiles for a long time bask in the sun, awakening your body. Despite the large body weight, animals are agile in hunting. Their main victims are swallowed right away, and large specimens are first dragged under water, and then torn to pieces or left for rotting and decay of the carcass.

The American alligator is known as the architect of the new reservoirs. The animal digs a pond in a swampy area, which is saturated with water and inhabited by animals and plants. If the pond dries out, lack of food can lead to cannibalism.

Reptiles begin to search for new water sources. Alligators communicate with each other through a set of screams. These can be threats, mating calls, roars, danger warnings, calves’ calls and other sounds. 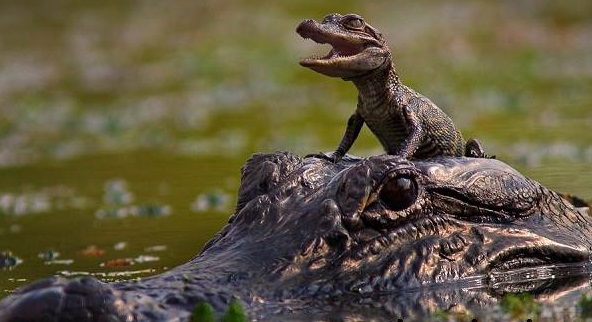 In the photo an alligator with a cub

Alligator’s diet includes everything he can catch. But unlike a crocodile, not only fish or meat becomes food, but also fruits and leaves of plants. The animal is engaged in hunting at preferably at night, during the day it is slept in holes.

Young individuals eat snails, crustaceans, insects, turtles. The maturing alligator, like a crocodile, feeds on a large victim in the form of a bird, a mammal animal. Hunger can force to use carrion.

In relation to man, alligators are not aggressive if they do not provoke animals in their habitats. Chinese reptiles are considered the most calm, but rare cases of attacks are recorded.

Crocodiles, caimans and alligators hunt even wild pigs, cows, bears and other large animals. To cope with the prey, it is first drowned, and then its jaws are pressed into pieces for ingestion. Holding the victim with their teeth, they rotate around their axis until they break the carcass. The most bloodthirsty and aggressive of the relatives, of course, the crocodile.

Reptiles can wait on the hunt for hours, and when a live object appears, the attack lasts a second. The tail is made forward shot for instant catching the victim. Rats, muskrats, nutria, ducks, dogs, alligators are swallowed whole. Do not disdain snakes and lizards. Hard shells and shells grind their teeth, and the remnants of food rinsed in water, freeing the mouth.

Reproduction and lifespan of alligator

The size of the alligator determines its maturity. American species breed when the length exceeds 180 cm, and Chinese reptiles, smaller in size, are ready for the mating season with a length of just over a meter.

In the spring, the female cooks a nest of grasses and branches mixed with mud on the ground. The number of eggs depends on the size of the animal, on average from 55 to 50 pieces. Nests are closed by grass during incubation.

In the photo the alligator’s nest

The floor temperature of the newborns depends on the temperature in the nest. Excess heat contributes to the appearance of males, and coolness — females. The average temperature of 32-33 ° C leads to the development of both sexes.

Incubation lasts 60-70 days. The squeak of newborns is a signal for digging out the nest After hatching, the female helps babies get to the water. During the year, guardianship of offspring continues, which is slowly growing and requires protection.

By two years, the length of young stock does not exceed 50-60 cm. Alligators live on average for 30-35 years. Experts believe that the duration of their stay in nature may increase to a century.