An animal of alpaca appeared long before the Egyptian pyramids. It is amazing that only uplifted in the mountains of South America, the animal was preserved there in natural conditions and to this day, without changing its original territory. 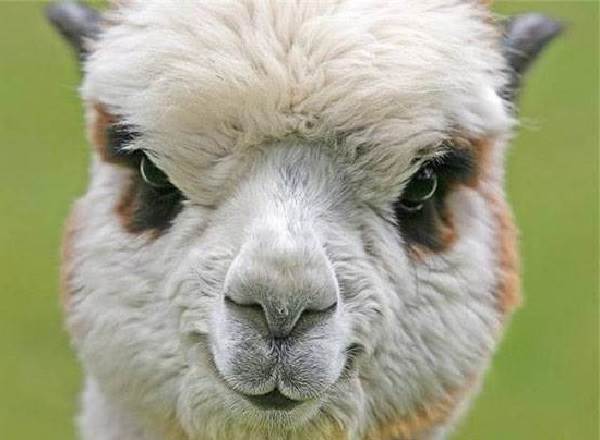 In modern times, the settlement of alpaca in different parts of the world is an enticing and expensive enterprise, which is explained by the unique demand for this amazing creation of nature.

Description and features of alpaca

Today alpaca is a domesticated animal from the family of camelids. In appearance a small, up to 1 m tall, mammal with a good-natured appearance, similar to a small lama or a lamb in curls all over the body. By weight, adult individuals reach 70 kg.

Alpaca is considered a rare animal, among which there are only two groups:

1. Alpaka Uakaya — the most common variety, it is compared with a baby teddy bear for soft and thin wool.

2. Alpaca Suri — a rare species. Wool is the most qualitative and valuable, similar to long and swirling curls. 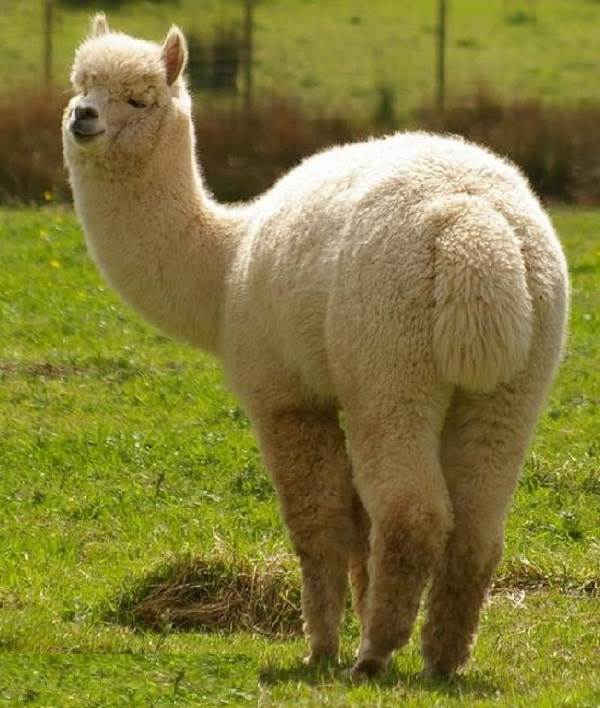 Alpacas represent a group of callused animals and walk with the support of the phalanx of the fingers. They can not trample pasture like sheep or goats, since they do not have hoofs, but only callous growths as a foot. Their two-toed limbs have curved and blunt claws.

The main feature of animals is a very dense and long coat, for which they are so appreciated. Thanks to a dense apparel, alpacas have adapted to live on a large mountainous, in a harsh terrain. At high altitudes, the temperature fluctuates within one day to 300 days. 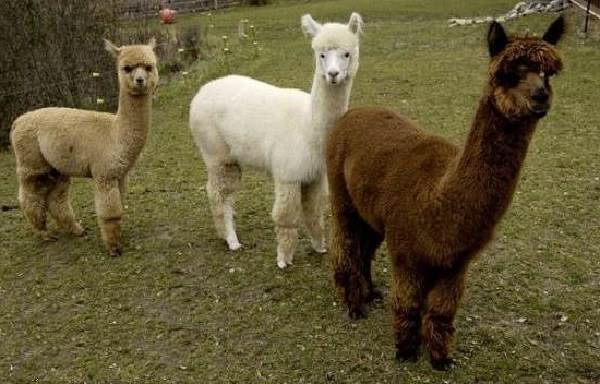 Feature of animals is the ability to breathe thin air. Their wool continuously grows, reaches 30 cm on the sides, differs in a thin and delicate structure. The lengths of the main hair and undercoat are practically the same.

Shades of color from white to brown and black tones, sometimes there are alpacas with a pattern of white and beige spots. The unique qualities of wool are lightness, softness, gloss, for which it is called «divine fiber». 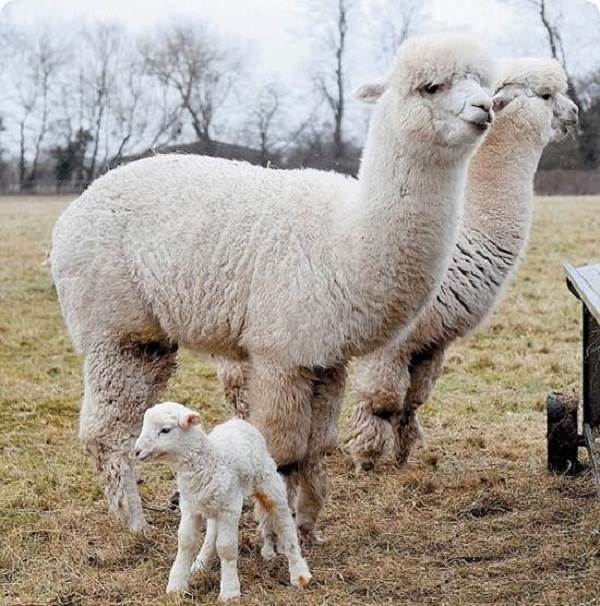 Alpaca has a forked lower lip and strong growing incisors on the lower jaw, allowing to eat various kinds of plants. Animals interact with each other not only with voice signs, but also widely use the language of body movements unfamiliar to man: a certain stance, the position of the ears, the turn of the neck.

Crossing alpacas and lamas gives offspring, ideally suited for the role of pets. Уарисос, so them name, differ ease in management, resignation, soft character. But they do not give their offspring.

Habitat and lifestyle of alpaca

The ancestors of alpaca, as established by DNA research, were vicuña from the family of hornless camels, and the llamas are the next of kin. Their habitat is South America, the highlands in the Andes.

In this territory, in forests, mountains and on the coast, about 3 million animals live. In other places, the breed does not take root in natural conditions, although for breeding and domestication animals are exported to many countries of the world, only in Australia there are more than 60,000, and in England there are 10,000 alpac-settlers. Multiple attempts to acclimatize alpacas in the nature of Europe and Africa ended unsuccessfully. 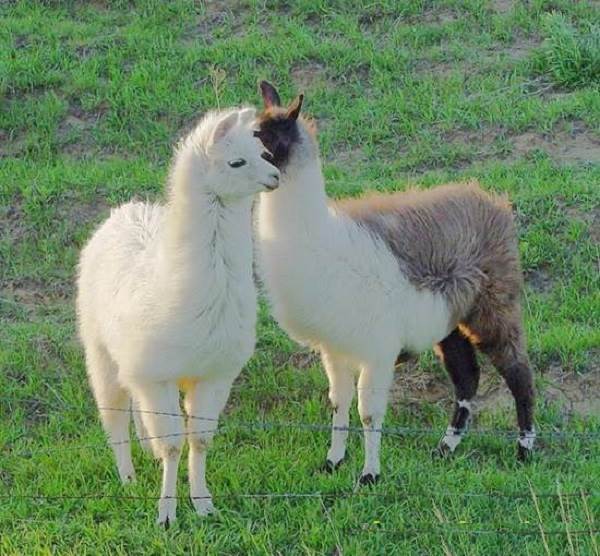 The human interest in alpaca originated in antiquity, approximately half a century BC. Ancient Incas for the possession of wool, meat and animal skin were engaged in their breeding. Even manure was used — it became fuel. Gold of the Incas was called alpaca wool. Today, for the people of Peru, Bolivia, Ecuador, Chile, this is an important export commodity. And once it was the local currency of the Incas.

Inhabitation in the mountains, severe climatic conditions, alpaca is transferred by the warm and long coat, which covers them particularly tightly on the sides. By qualitative characteristics, it is seven times greater than the sheep. 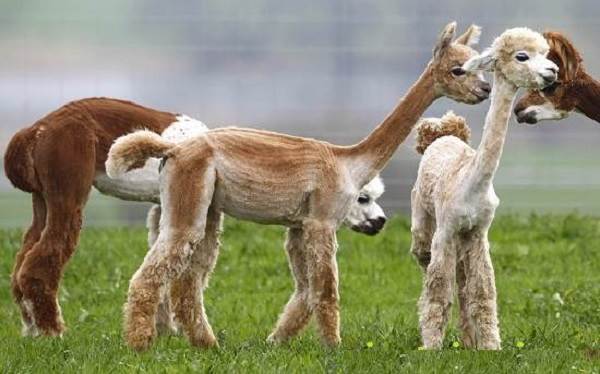 An animal of alpaca in its ancestral territory leads wild or semi-savage, in captivity, a way of life. Herds of animals graze in the harsh regions of the highlands, almost at the very snows, where nothing grows except the grass. Livestock breeders even sow other meadow plants for alpac feed.

In natural conditions alpacas live in herds. During the daytime, they are active, and at night there is a rest period. During this time, you need to digest all the food you eat, accumulated over the day. 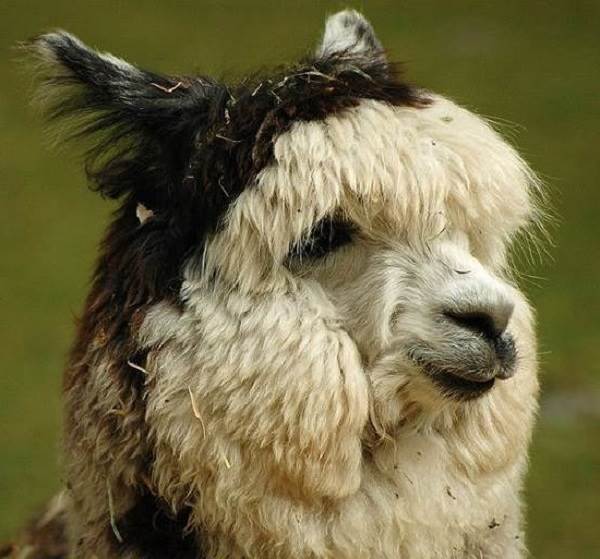 The natural enemies of animals are, in the main, pumas and leopards. If small predators attack, alpacas are protected by their forelegs, striking at the enemy and spitting. At the same time, they make sounds, notifying their relatives about the danger.

The content of alpacas in captivity is not difficult, once they were able to tame even the Indians. They do not require special conditions, special structures or special feeding systems, because in the wild they are tempered by the harsh climate of the mountains. But a certain care for alpacas, of course, is needed.

Usually they build a small enclosure with a canopy of rain or snow. Warm room is not required, because the unique wool — a wonderful thermostat. They do not differ from ordinary herbivorous farm animals by the diet. Favorite delicacy is licking salt. 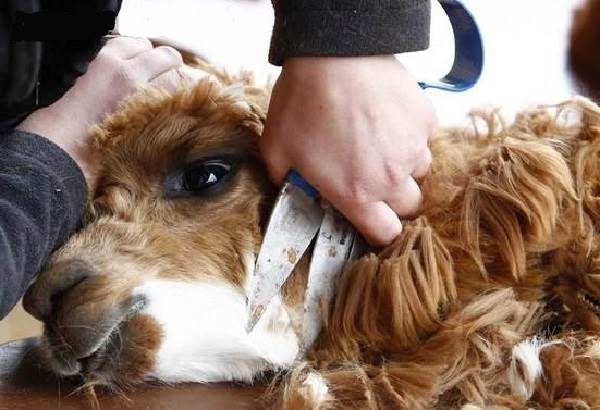 By nature, animals are very nice and kind creatures, and with respect to a person are obedient and unstrutches. They have an immoderate curiosity, because of which they can get hurt if something attracts their attention.

They are very stubborn in their intentions. Like camels — relatives, alpacas know how to spit. But they do it only in their own environment, mainly because of the division of food. People do not offend this habit.

Due to their kind disposition, communication with alpacas is very useful for developing activities among disabled children and the elderly. It is only necessary to note that sometimes animals show fearfulness, because of which they can strike suddenly with their feet or head. But in a calm atmosphere they never attack. 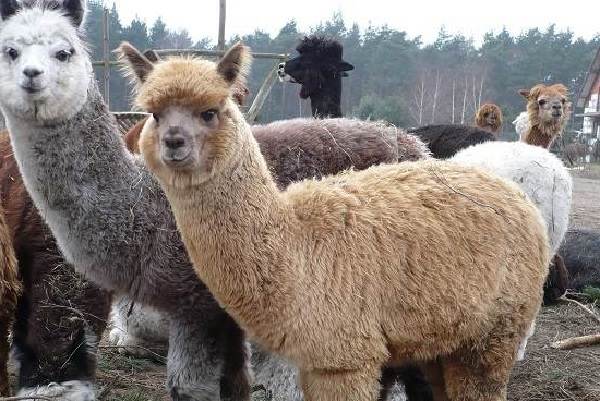 They use animals as pack animals, they are able to carry up to 70 kg. But keep the alpaca, mostly, of course, because of the wool, which is of great value. Once, clothes made of their wool were worn by very rich people. Today it is one of the most expensive.

Breeders spend a lot of money on the delivery and cultivation of alpaca. You can buy cubs only in special nurseries. Breeding animals give in very difficult.

Alpaca is an animal herbivore. They feed on herbs, leaves, practically all kinds of vegetation. During the search for food, they move very slowly, searching for the most nutritious plants. Need a regular watering.

From other ruminant animals, they have an anatomical feature that gives them an advantage in collecting feeds. The alpaca’s mouth resembles a hare’s lip, the incisors are located at an angle, constantly growing, like in rodents.

Alpacas are unpretentious and hardy, less demanding of food than the usual sheep. In captivity they are fed in summer with grass and leaves, and in winter — with hay, vegetables, bread and oatmeal. The diet can be the same as a horse’s. To obtain special quality wool, cattle breeders add various minerals to the feed.

Reproduction and life expectancy of alpaca

In the herd, alpac has its alpha male, or leader, to a certain habitat. Marriage time in the harem lasts all year round. Hatching of one calf lasts 11 months. Twins appear very rarely. Offspring alpaca bring in two years only once. 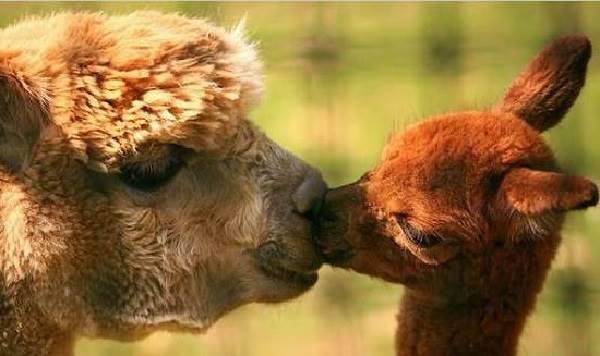 A newborn baby weighing 1 kg rises to his feet within an hour. The color of his coat is always gently creamy, but later it changes. Maternal feeding lasts up to 6 months, when the baby reaches a weight of 30 kg. The maturity of young alpacas begins at 2 years. In natural conditions, animals live up to 25 years. But in captivity, their life, as a rule, ends at 7 years.

Domestication of animals for the production of wool is a profitable enterprise. A variety of natural shades, antiseptic properties, non-adherence to rolling and stalling, durability, lack of lanolin — an incomplete list of advantages and unique features.

The wool of a young animal is especially valuable and expensive. From one specimen in two years, one time is cut to 1 kg. For comparison, an adult animal gives up to 5 kg of wool. Therefore, the cost of products is attributed to a high price category: an Italian-made alpaca scarf costs about $ 400. 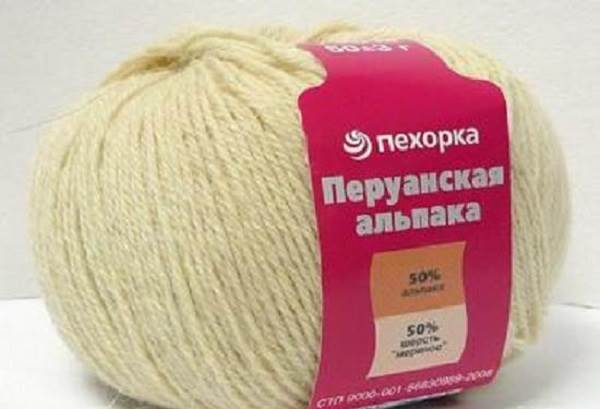 Modern technologies allow creating unique compositions of materials. A mixture of acrylic fibers and alpaca wool is a high quality fabric. Many people know a rug made of alpaca wool, carpets of unsurpassed quality.

Feature of care for coats of alpaca, scarves, veils, plaids or other things is the inadmissibility of the use of naphthalene. It is allowed to use only natural antimolecular substances: lavender, tobacco or cedar.

Alpaca serves people for more than one millennium, remaining a creation that brings not only benefits in economic life, but also giving a person an invaluable connection with the primordial nature and history.

Reviews about things from alpaca

I read a lot about alpaca. The reviews are excellent, I bought a blanket. For three years as a new one, it has not gotten soaked and stained, although the whole family uses it, especially when it’s cold in the autumn.

You can buy wool of alpaca today. The price bites, but it’s worth it. From alpaca yarn serves for a long time, things can be loosened and bandaged after socks, they will not be worse. The main thing is that it does not fall down like the others.

The production of a coat from alpaca is now established not only abroad, they are made in St. Petersburg, Moscow. The choice is huge, only the price of alpaca is high. But you can wear a few seasons without thinking about anything. Do not rub, do not slip, do not shed. Alpaca!

I bought a coat from alpaca. Nothing can be more comfortable in the fall. When warming is not hot, it does not freeze when cold. For unstable weather, the universal thing. The label on the label is alpaca cloth — Italy, but it’s sewn with us. I recommend to everyone.