Features and habitat of the Altai maral

Altai maral is a unique endangered animal. In the mountainous regions of Altai, beautiful deer — Altai marals live. These are very large animals, the weight of male individuals can reach 350 kg, and height at withers is 160 cm. 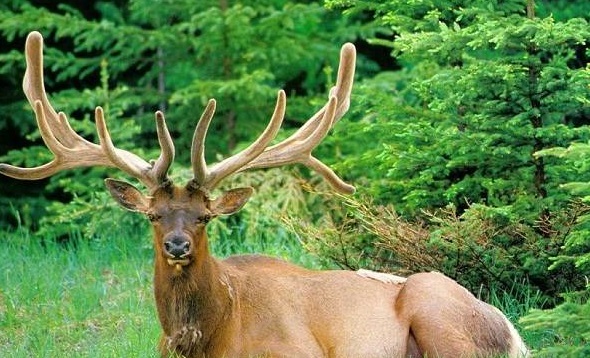 But despite the size, these creatures are able to move along steep slopes with incredible ease, while demonstrating extraordinary grace and being an adornment of mountain landscapes.

The look of this deer is refined and unique. The most remarkable adornment of the male (as you can see, looking at a photo of the Altai maral) is its magnificent branchy, diverging at each rod by five or more processes, horns that animals lose from time to time, but every spring they begin to grow again, reaching later impressive sizes up to 108 cm.

Females are not endowed with such wealth. In addition, it is easy to distinguish them from stronger and larger males. The color of these animals varies depending on the time of year. 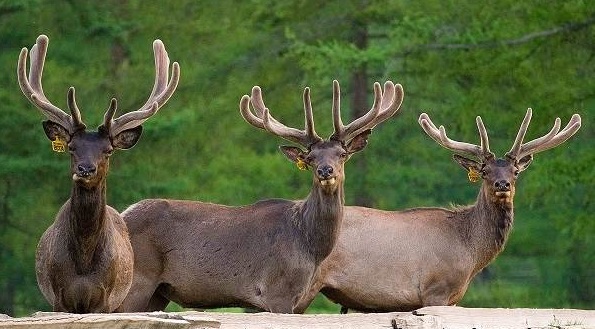 In the summer months, it is brown-brown or reddish, and in the winter to this range are added grayish tones. A remarkable feature of the color of a deer is also a yellowish mirror edged with a black stripe, partly setting on the croup.

In the Altai region marals are found most often. Their distribution also extends across the territory of the Krasnoyarsk Territory to the Tien Shan and Kyrgyzstan, where they can be found in deciduous and coniferous forests covering mountainous areas. Such deer also live in New Zealand.

These are animals of the Red Book. Once the habitat of the Altai maral was much more extensive. However, for many reasons, such magnificent creatures are gradually, but inexorably, dying out, and no measures are yet able to change this state of affairs. For breeding and protection of these deer maral breeding farms are created.

The first information about such a unique representative of the fauna of the earth was explored in the 18th century from the works of Pallas. Biologists have long been engaged in the study of such living beings, but the most comprehensive information about them was obtained only in the 1930s by workers of the Altai Reserve.

The Altai maral was recorded as an independent species in 1873, but a century later this type of animal was attributed only to a number of subspecies of red deer: the Siberian group, of which the deer are now considered to be a part. Besides her, there are also Western and Central Asian groups.

Objects of hunting such animals serve from time immemorial. Valuable are the fat and meat of the Altai maral, as well as excellent skin. But this list does not end there, because the described deer are amazing and unique creatures of nature. The blood of the Altai maral has long been used by man as a medicine, and is still valued throughout the world and has no analogues. 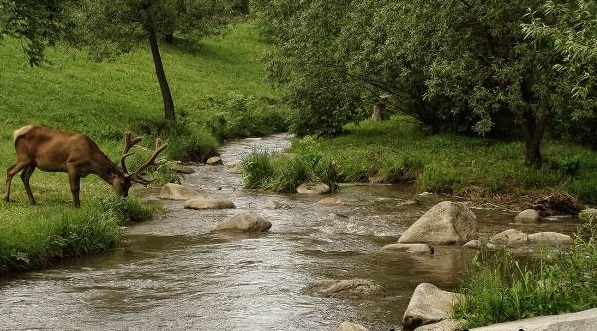 Almost fabulous qualities of these creatures, served not only as a pretext for creating myths, but also turned into objects of commerce, while, unfortunately, not always with respect for the sense of proportion, serving as an object of unrestrained profit. This state of affairs was undoubtedly the main reason for the unscrupulous extermination of animals.

This affected the fate of the deer negatively, and at some stage led to the almost complete extermination of a unique species. In addition to poaching, natural factors also affected the downsizing: heavy winters and the lack of suitable food.

The hardened horns of the Altai maral are used to make jewelry, expensive crafts and souvenirs. But this detail of appearance, which serves not only as an ornament, but used by animals as a means to fight and protect, has other valuable qualities for humans. 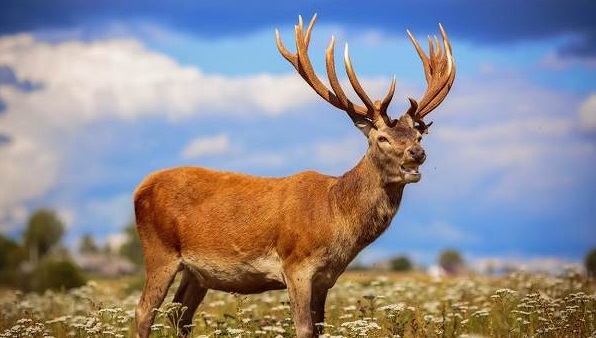 Spring for deer becomes a period of growth of antlers. This is the name of neo-stiffened young horns of Altai marals. This invaluable material used by man in many areas of pharmacology.

The healing properties of antlers from ancient times were used in Oriental medicine, were known and especially valued in China. That is why the inhabitants of the Middle Kingdom bought up a similar unique product for big money. Several centuries ago, the properties of the antlers of the Altai maral began to be used in Russia.

Over time, hunting for deer has faded into the background, and the creation of nurseries where these animals were kept has become a lucrative business. Nowadays antler reindeer breeding is developed quite widely, and the most valuable material is successfully supplied abroad. 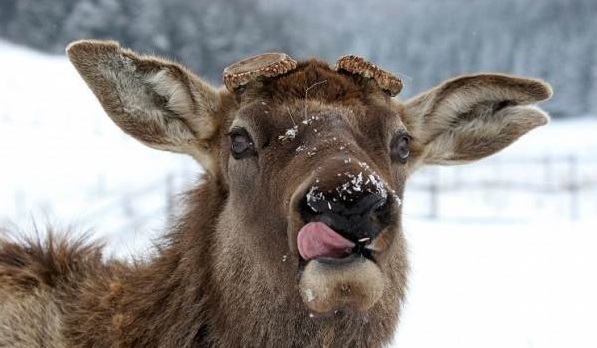 The antlers start to be cut off at marals from the age of two. They often reach a weight of up to 10 kg, and such valuable bone tissue costs much more than the horns of other deer.

It is customary to cut off young horns before the end of their growth. After this, the antlers are harvested in a special way: dried, boiled, preserved or used for the manufacture of medicines.

Food of the Altai maral

Maral is an animal that feeds exclusively on plant food, but its diet is varied and depends on the time of year. In the winter months, in order to feed themselves, they descend to the foot of the mountains.

It often happens that this difficult path is up to 100 km long. And animals pass through many obstacles, crossing swift mountain rivers.

They swim beautifully. In the period of cold weather, the deer remains nothing else but to be content with acorns and leaves, sometimes with needles, or eat lichens. 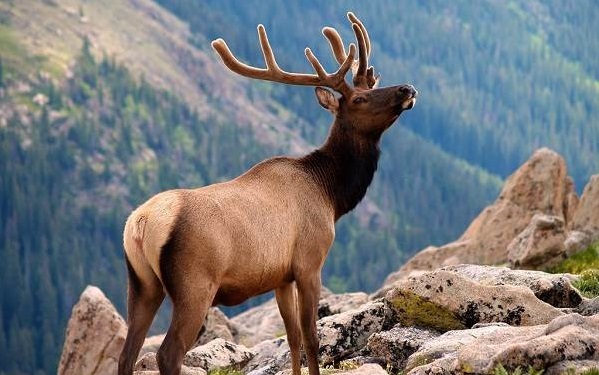 During this period, their bodies are extremely in need of minerals. To fill this need, animals chew the ground, lick the salt in salt licks and greedily drink mountain mineral water from sources.

With the arrival of spring, nutritional problems disappear by themselves. At this time of year, the mountain forests and steppes are covered with young, lush, tall grass. And among the plants, given generous nature, there is a lot of medicinal, for example, red and gold root, Leuzea, capable of healing any ailments. A little later, mushrooms, berries, and nuts appear, which makes the deer diet varied and nutritious.

Maral refers to this type of living creatures that mature to have offspring, rather late. They get the ability to mate at the age of a little over a year, but females give birth to deer only after they reach the age of three years. Male individuals, however, acquire the ability to complete fertilization only by five years. 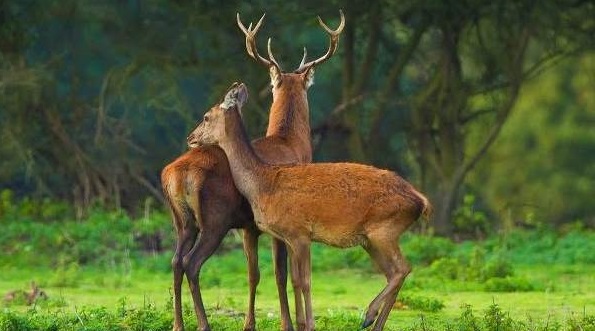 Outside the breeding season, the males prefer to wander among the mountains alone. Their girlfriends and youngsters spend their lives uniting in small flocks, which include from 3 to 6 members, and the main group in this group is always an experienced female.

Omnipotent instincts in these animals appears closer to the fall. At this time, the bulls are sent in search of places where females graze, attracting their attention with a loud, low and drawn-out roar, the sounds of which are carried for many kilometers.

In the mating season, the animals practically do not eat food, but they drink extremely much. Violent clashes for the right to leave offspring at this time — the most common thing for deer. Often the consequences of battles are severe injuries. But by the end of autumn passions subside, renewing only next year.

For the appearance of offspring, bulls create peculiar families that are harems of two or three, less often five females. The owners of them, with extraordinary jealousy protect their females from the encroachments of rivals. 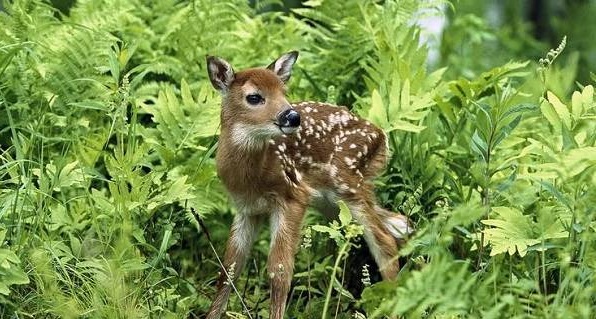 Red deer cubs may have spots, but only before the first molt

But females are given complete freedom of choice. Usually they choose the strongest male with big horns. But if they want to leave the patronage of a bored leader and find another, their former husbands do not at all strive to discourage their friends.

Cubs are born only to the beginning of next summer. During the mating period, females are calm, and all their ardor is wasted on the protection of the newly emerged offspring.

Rushing to the defense of the offspring, these large and bold animals are able to fight even with such bloodthirsty predators like lynxes and wolves, coming out victorious and putting the offenders to flight.

Living in the wild, deer live quite a short life, which lasts no more than 14 years. But in livestock