The largest snake on the planet is the anaconda, which belongs to the boas. Until now, the snake has not yet met more anaconda. The average weight varies around 100 kg, while the length reaches 6 meters and more. Some experts say that 11 meters for such a water beauty is not the limit.

True, such a length in the snake of the anaconda has not yet been scientifically fixed. So far, it has been possible to meet and point out conclusively only the anaconda, whose length was 9 meters, which, of course, is not 11 meters, but such dimensions of the snake make us shudder. By the way, female snakes are much bigger and stronger than males. 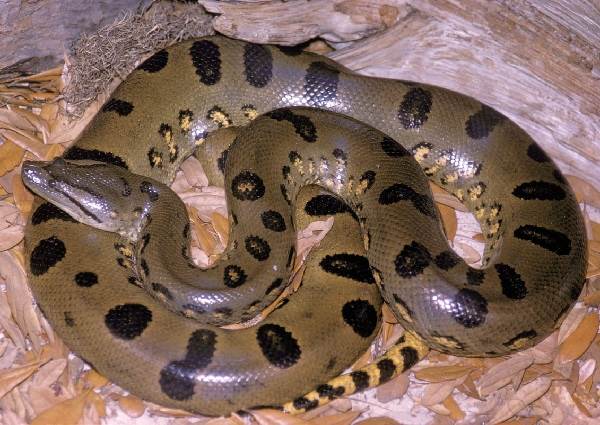 Why is “water beauty”? Because anaconda has another name — water boa. It is in the water, in shallow water, that she manages most easily to catch prey and remain unnoticed. And the nature took care of the conspiracy of the anaconda. The skin color of this snake is gray-green, on the back are brown spots that are staggered.

Spots do not have a strictly defined form — nature does not like geometry, and the snake has every chance to go unnoticed with such a “wrong” color. In order to merge even more with water covered with fallen leaves, there are small yellowish spots with dark edging on the sides of the body.

The skin coloration is unique for each individual, therefore, it will not be possible to find two absolutely identical anacondas. Since the anaconda is a boa constrictor, it is endowed with great power. She has no poison, in this regard she is harmless, but woe to anyone who takes it lightly — even a small deer can become prey. 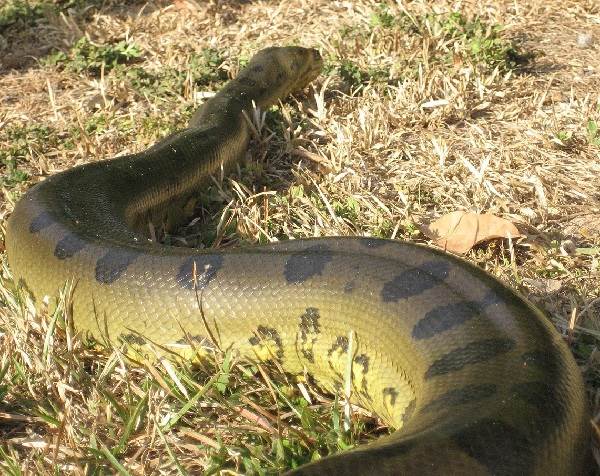 This reptile is endowed with not only strength, but also intelligence and, even, deceit. Her stuck-out, forked tongue animals and some people are mistaken for a dangerous organ, believing that it is with his help that a deadly bite will be inflicted. But so the snake is simply oriented in space. The language recognizes the chemical component of the environment and gives the command to the brain.

Anaconda prefers to lead the aquatic lifestyle. She has no enemies in the water, and on land no one dares to mess with this dangerous predator. There she molts. The snake is a cold-blooded creature, so if there is not enough heat, it prefers to crawl ashore and bask in the sun, although it does not crawl away from the water.

If the reservoir dries up, the anaconda has to find another for itself, but when the drought overtakes all the reservoirs, this snake buries itself in silt and falls into a state of stupor, only in this way does it manage to live to the new rainy season.

Anaconda lives in the entire tropical part of South America. They are quite comfortable in the canals, rivers, lakes, snakes inhabited the Amazon and Orinoco, stay on the island of Trinidad. 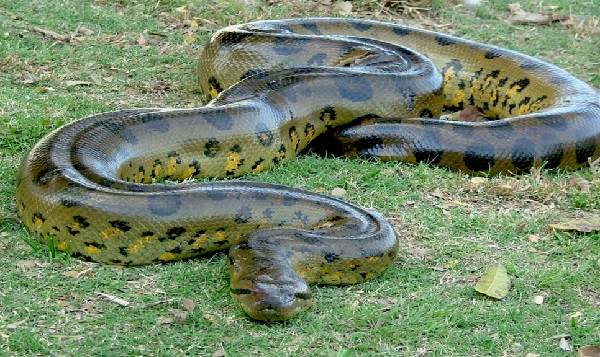 Savannah Llanos (Central Venezuela) turned out to be a snake’s paradise at all — the semi-annual period of rains creates the perfect place for anaconda to live and breed, which is why there is much more in those places than anywhere else. Local lagoons and marshes are warmly heated by the sun, which further adds to the favorable conditions in this world of anaconda snakes.

The diet of this boa is varied. Anaconda feeds on all small animals that can be caught. Fish, small rodents, waterfowl, lizards and turtles are eaten.

All this snake stomach perfectly processes with the help of the strongest acids, even the shell and the bones of turtles are not something inedible. Of course, small prey is not a reason to use powerful muscle rings, but the use of large prey (and the anaconda does not hesitate to take sheep, dogs, small deer) is not a pleasant sight.

First, the snake lurks its prey for a long time, lurking among the coastal thickets, then a sharp jerk follows, and right there rings are wound on the poor man, which compress the victim’s body with extraordinary force. 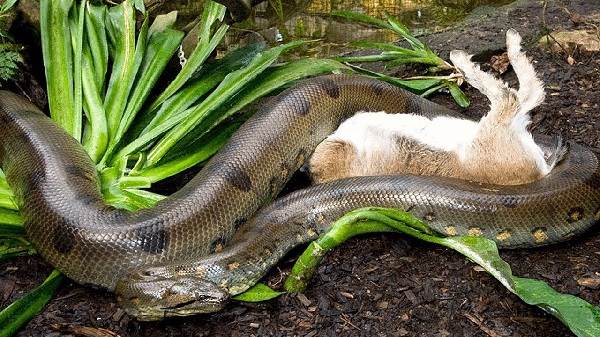 Anaconda does not break, does not crush bones, as other boas do, it squeezes the prey so that oxygen cannot enter the lungs and the prey is killed by suffocation. This snake has no fangs, so it does not tear or chew food.

Starting from the head, the anaconda begins to swallow the victim. Its seemingly medium-sized mouth is stretched to the size necessary for the passage of the carcass. At the same time stretches and throat. There are photos of the anaconda, which shows how the snake swallows a small deer.

Although, according to experts, there is only a single case of an anaconda attack on a person, this snake firmly settled in the section of dangerous animals. By the way, their tribesmen are not averse to snack. So, in the zoo, its menu got a 2.5 meter python.

During ingestion, the anaconda is most vulnerable. This is understandable, all its strength goes into pushing food inward, the head is occupied, and it is impossible to slip away with a large piece in the mouth with lightning speed. But after eating a snake «good-natured.» It is easy to explain — she needs time to calmly digest food.

Scientists have not exactly established the lifespan in the wild, but the anaconda does not live in captivity for a long time, only 5-6 years. However, this figure is also untrue, because there was a snake that has lived in captivity for 28 years. Anaconda is a snake of the wrong size to live in a flock. Like other large predators, it lives and hunts alone. 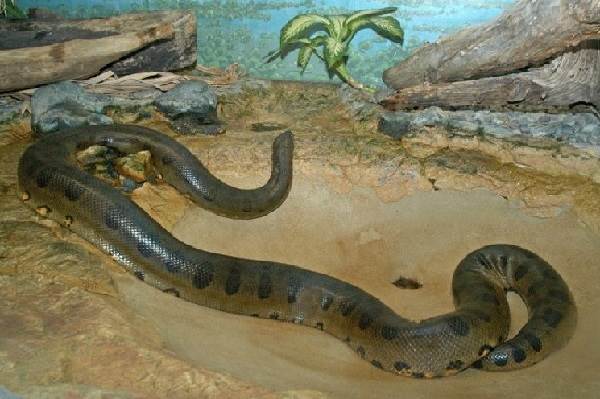 However, in the spring (April — May), when the rainy season begins in the Amazon, these snakes gather in groups — the mating time starts at the anacondas. In order for the «groom» not to wander too long in search, the «bride» leaves a trace on the ground, which during this period was generously flavored with an odorous substance — pheromone.

On this trail, the female is found not by one, but by several males at once. However, it’s not customary to arrange anaconda males for beautiful women. Here, too, the strongest will become the father of the offspring, but wise snakes will choose the most worthy of them differently.

All the male individuals that have found the female by smell are wrapped around her body and love games begin, which last up to one and a half months. All this time, the males can not eat, hunt, rest — courtship takes them all the time, and even strength. But after pairing, the clew disintegrates by itself, and the “lovers” crawl away in different directions.

Males are removed on their own business, and the female begins a difficult period of gestation. Pregnancy continues 6-7 months. All this time, the female does not hunt and does not feed, because she is especially vulnerable during feeding. Therefore, the anaconda losing weight greatly, for her such a state is stressful. 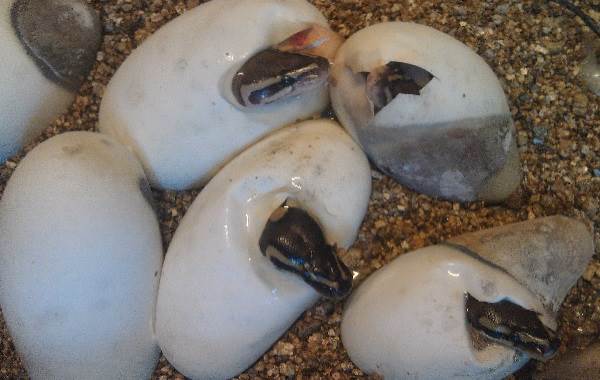 But the offspring, nevertheless, safely born. The serpent is born from 30 to 42, all of them are born alive. Although anaconda is able to lay eggs. Cubs are born only a little more than half a meter in length, but should already worry about their own food.

After giving birth, a mother who was hungry for half a year goes hunting. Of course, the mothers of the anacondas are far from the most anxious, she does not nourish them, does not protect against predators, does not give them nests. Little serpents already from birth are endowed with all survival skills. They swim superbly, can skillfully mask themselves, deftly move at the slightest danger.

And they have a lot of dangers. In the world of animals, everything is arranged naturally, if an adult anaconda practically has no enemies and eats caimans, birds and small wild cats with impunity, then these same cats and caimans now hunt for anaconda pups.

Therefore, of all the brood, only the most agile, fast and strong serpent young remain alive, and they turn into the strongest snakes on earth, of which only man is the real enemy.