Description and features of anteater

Our planet belongs not only to man. It is inhabited by bright, beautiful plants, surprises us with a variety of birds and fish, does not cease to amaze with the unusual nature of the animal world. One of the most amazing animals is the anteater.

Anteater belongs to the family of mammals, detachment of incomplete teeth. So dry is written about him in encyclopedic sources. This is an interesting animal, to which our perception is still unusual. Its habitat is forests and shrouds of South and Central America. 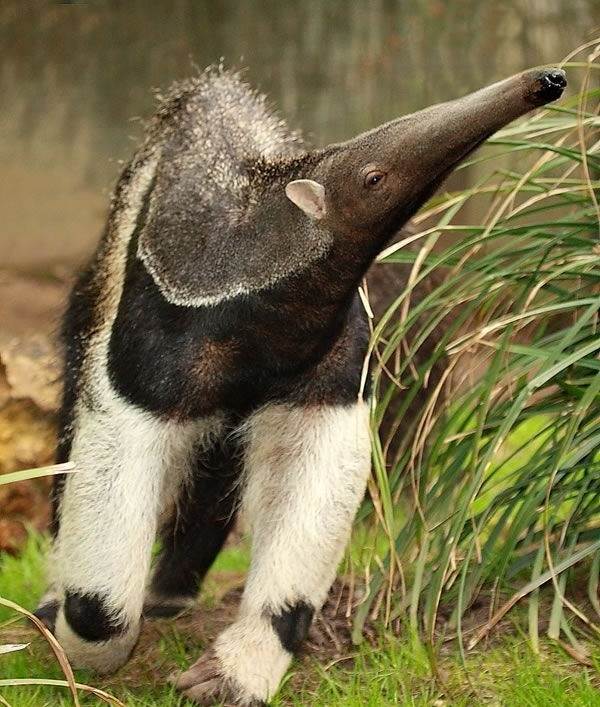 For an activity, the anteater prefers night, and during the day it sleeps, covering itself with its tail and curled up in a ball. Anteaters of small species climb trees to avoid falling into the hands of predators, and a large or giant anteater sits right on the ground. He does not fear an attack, because he can easily defend himself with powerful claws with claws that reach 10 cm.

The appearance of this beast is very peculiar. Mighty paws, a small, elongated head, small eyes, ears, too small, but the muzzle is long, ends with a tiny mouth, in which there are no teeth.

The anteater is devoid of teeth, but nature has provided it with a powerful and long tongue that exceeds the size of giraffe and even elephant tongues. The tongue is narrow — no more than a centimeter, the length of the tongue of the anteater is 60 centimeters, which is almost half of the entire body of the animal (without a tail). The end of the tongue grows out of the sternum. Moreover, the salivary glands moisten the tongue and give it an incredible stickiness.

The muscular stomach processes food with small stones and sand, which the anteater specifically swallows. The tongue is sticky, sticky and instantly all small insects that the anteater hunts stick to it. 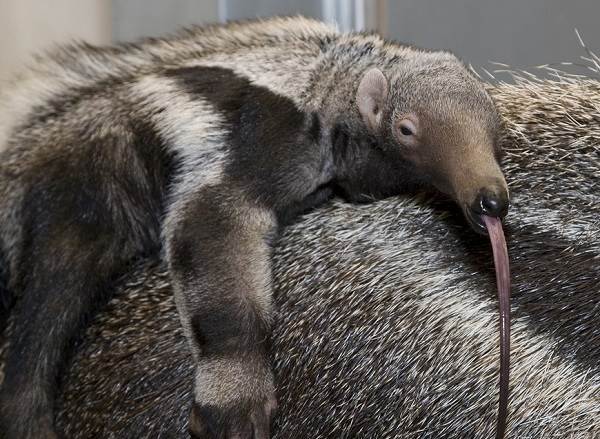 And the main menu of this animal are ants and termites. However, the anteater animal is not capricious. In the absence of anthills and termites, it easily absorbs the larvae, centipedes, worms, or simply berries, which are torn off not by the tongue, but by the lips.

In anteaters, basically, there are three types:

It is the largest representative of all anteaters. Only his tail reaches a length of at least a meter. Its front paws are equipped with four fingers with awesome claws. It is precisely because of the claws of the anteater that such a gait — it has to rely only on the outer side of the wrist, and turn the claws.

Therefore, the anteater runner is rather weak. It is easier for an anteater to enter a fight than to flee. To frighten the enemy, the animal takes the «rack» — rises on its hind legs and threateningly raises its front paws forward. Clawed paws, he is able to cause serious injury. 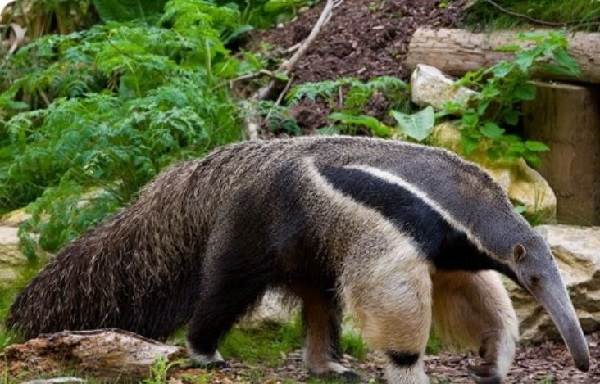 The hair of the giant is very tough and different in length on all parts of the body. The head is too short, the body is longer, and the tail reaches 45 cm. The large anteater lives only in South America. He is attracted to deserted places, where he actively behaves at any time of the day, but in the vicinity of a person he tries to leave the shelter only at night.

The anteater’s huge, clawed paws help it pierce the termitaries and rake the anthills, which it feeds on. The anteater has two mating seasons in spring and autumn, after which one female is born in 1, 5 — 1, 7 kg. She bears it for about six months, but small anteaters become independent only after two years. All this time they are with their mother.

Tamandois is a special kind of anteater, because it has 4 fingers on its forelimbs, and on the back five. He prefers to live in trees, because his length barely reaches 60 cm, with a tail — 100 cm.

It is half the size of its giant relative, although it is very similar to it, and differs only in its tail. Its tail is thick, strong, contributes to climbing trees. The wool color of the southeast tamandois is usually white-yellow, with a black back (as if in a T-shirt), a black muzzle and rings around the eyes.

The young completely have a white — yellow color, only by the end of the second year they begin to acquire the color of an adult animal. And representatives of the north — west have a monochromatic color — gray-white, black or brown. 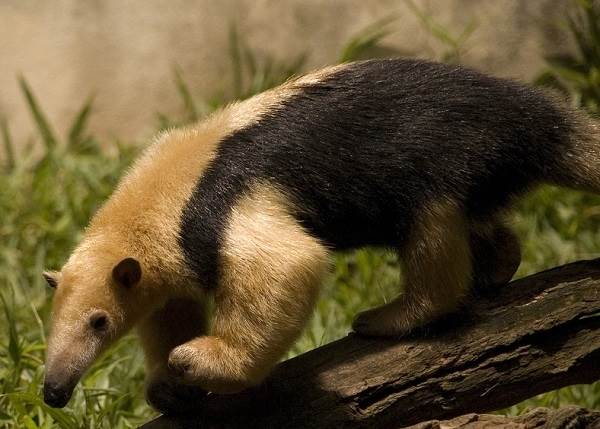 This anteater settles in the same countries where it is gigantic, but its range is slightly larger, reaching Peru. Prefers woodlands, shrubs and even on the edges. May be, both on the ground and in the trees, where he climbs to sleep.

When laying on a dream he catches his tail on a branch, rolls up in a ball and closes his face with his paws. Tamandois feeds on ants, mostly those that inhabit the trees. It is curious that in the agitated state, this animal spreads a very unpleasant, strong smell.

This anteater is the complete opposite of its big brother. The length of his body is only 40 cm with a tail. This animal also has a long muzzle and a strong, strong tail — because it has to live all the time in the trees. His coat is golden, silky, for which the dwarf anteater was nicknamed silk.

Despite its small size, this animal is a worthy «fighter»; it meets its enemies with a fighting stance and attacks with its front clawed paws. And yet, the enemies of the neg have enough, so the animal is only nocturnal and does not descend to the ground. 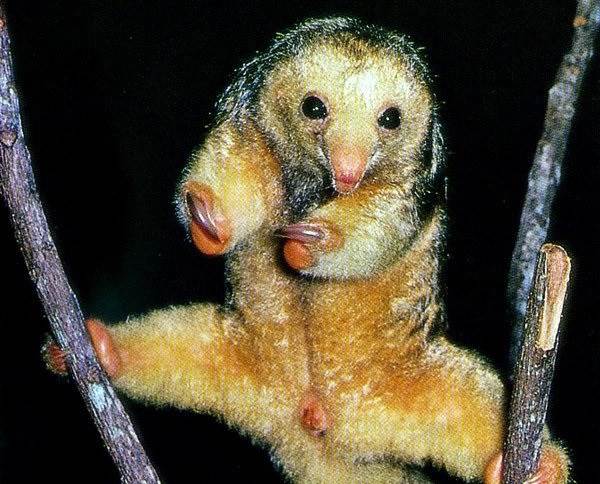 Couples are formed only for the period of mating and raising offspring. After the first few days that the cub spends in the hollow, he sits on the backs of the father or mother.

Both the male and female raise the cub with the same care. These interesting representatives of anteaters of different types are similar and different from each other. An anteater such as the nambat or the marsupial anteater is very curious.

Marsupial anteater and its features

The marsupial anteater belongs to the order of predatory marsupials. He lives in Australia. In animals from Western Australia, the back is covered with black stripes, and residents of Eastern Australia have a more uniform color. This is a small animal, whose length does not exceed 27 cm, and the weight is not more than 550 grams. muzzle elongated, pointed, tongue is long and thin.

But the nambat, unlike the other anteaters, has teeth. Moreover, this animal is one of the most toothy predators on earth — it has up to 52 teeth. True, he cannot boast with the quality of the teeth — the teeth are small, weak, asymmetric. Eyes and ears are large, with sharp claws. 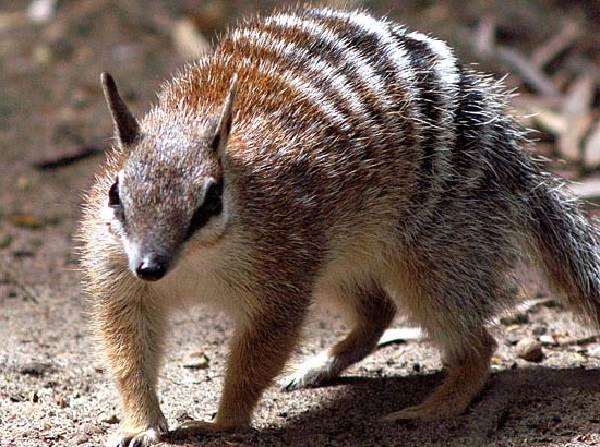 Interestingly, the «marsupial» — the name is not quite true. The nambat does not have a bag, and the young, which the female brings 2 or 4, stick their mouths to the nipples and so hang. This is an amazing feature that no other animal can boast.

Anteater as a pet

This animal is so interesting that many fans of the unusual give birth to him at home. As a rule, give tamandua. Anteaters are very smart animals, their owners manage to teach their pets to some teams, they even manage to open the fridge themselves.

And, of course, they should not be upset at all, otherwise the pet will be forced to defend itself. To his claws were not so dangerous, they are recommended to cut twice a week. 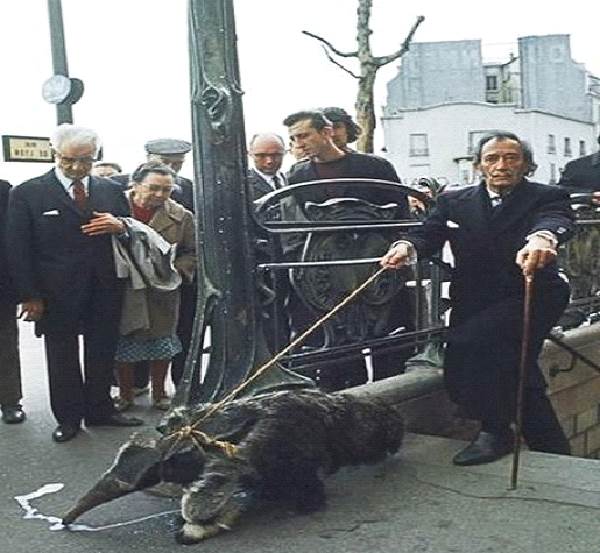 The content of this animal is rather troublesome: it needs to equip a special aviary, it’s better if there are various stumps, hammocks and swings there. It should be remembered that it is a sissy, so the temperature should be +25 degrees. In captivity, anteaters eagerly eat vegetables, fruits, cheese, ground products with the addition of minced meat. Sweets are harmful to them.

It is known that Salvador Dali after reading the poem by André Breton «After the Giant Anteater» was so interested in the anteater that he even started it at home.

He walked him on the streets of Paris on a golden leash and even went with his pet to secular receptions. Anteater Dali considered a romantic animal. Anteaters unusual animals. It is very sad that their number each year only decreases.