Features and habitat of the crane belladonna

As a member of the crane family, this bird is considered the smallest among its fellows, having a weight of not more than 3 kg and a value of about 89 cm. 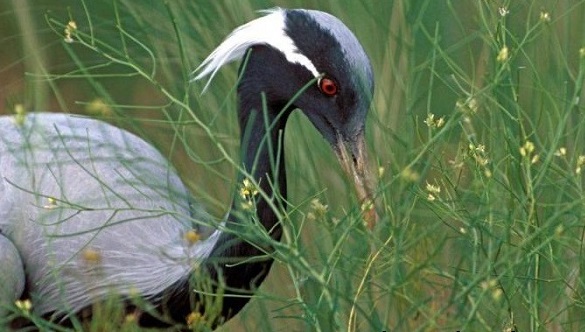 Crane demoisor has a yellowish short beak, black head and neck. The eyes are highlighted in orange-red shade. A distinctive feature from other relatives is the absence of a bald spot on the head.

As seen in the photo of the crane demoiselle , the plumage of the bird is gray-blue. Flywheel is ash gray. And from the beak to the nape, a section is isolated from bunches of gray-white feathers.

With age, the lighter coloring of cranes becomes noticeably darker compared with young individuals. The voice of beautiful women is a melodious, high and sonorous shouting.

Listen to the voice of a crane

Among the features of the crane, there is a curious feature of the structure. Toes on the black legs of the bird, being shorter than other cranes , greatly simplify its ability to move. This creature runs beautifully among the overgrown with dense vegetation, steppes — the natural natural zone of the crane belladonna . 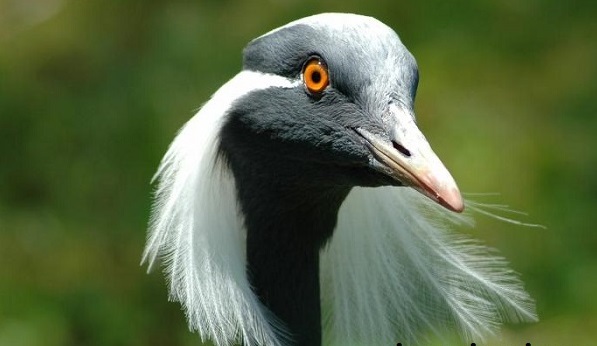 Among the representatives of their family, these birds are in number in third place. In total in the world there are about 200 thousand (or slightly more) of such birds. At the same time, the Canadian crane is the second most common among the living creatures of the planet.

About a hundred years ago, the belladonna population flourished, and nothing threatened the existence of this species of fauna. However, in the past century, the state of affairs has changed for the worse.

And although the range of such birds has spread from Europe to Western Siberia and Transbaikalia, covering 47 states, at present, the belladonna crane lives exclusively in arid areas, among steppes and in semi-desert zones. There are many such birds in Kalmykia and hotel areas of Kazakhstan. They are also numerous in Mongolia.

The nature and lifestyle of the crane belladonna

The bird is classified as a species in need of protection, which is noted in the Red Book . Crane deer to meet in nature is becoming increasingly difficult. But the reasons for the problem were not poachers at all, because the hunt for such birds, although being conducted, is mainly only in some Asian countries. 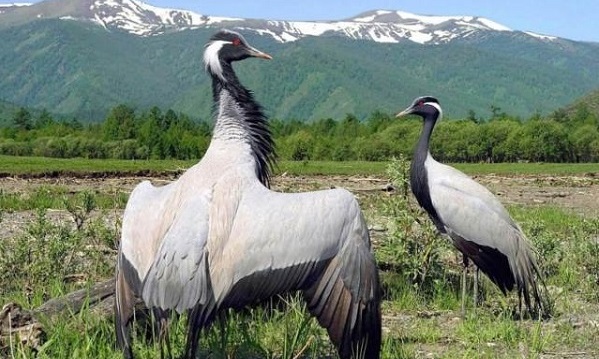 Man’s economic activity, plowing up the steppe spaces and the crowding out of birds from their usual environment, where they had lived for centuries, had such a pernicious effect on the state of the population. However, belles are not afraid of people at all, and even adapted to build their nests on cultivated lands.

In Mongolia, the number of this species of cranes continues to remain high. And it is not surprising, because the local population, herders and nomads, worship these birds. In Ukraine, a couple of centuries ago, such winged pets were kept with other poultry, and taming them is not a problem at all.

Crane demoisel is a bird belonging to migratory representatives of the feathered kingdom. These winged creatures spend the winter, flying out from their usual nesting sites in flocks of several hundred individuals, in India and northeast Africa .

Their shoals fly, as a rule, not high, announcing the neighborhood pipe smoking. From time to time, members of the feathered group change places. In flight, they flap their wings, drawing their heads and legs, sometimes floating in mid-air. 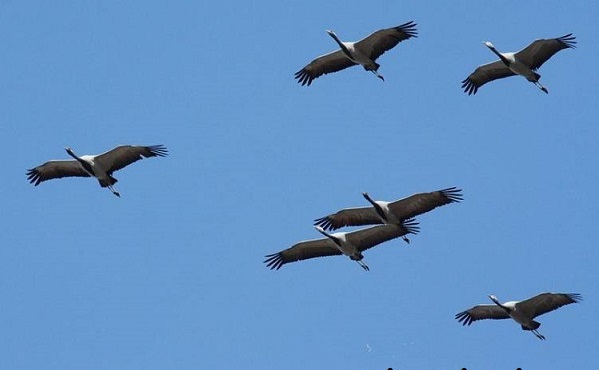 In wintering, birds often form joint flocks with their relatives, gray cranes . Days are spent in search of food in the grain fields, and at night, islands and sites in shallow water are chosen as places for recreation. With the onset of spring, the belladonna, forming small groups, return back to the places of their nests.

Often belles are kept in zoos, where they are perfectly acclimatized and successfully multiply. In the summer, the usual place for their placement is an open-air cage, and in winter birds are relocated to warmed rooms.

Belles are engaged in prey feed in the first half of the day, mostly consuming vegetable food. They prefer legumes and cereals; individual herbs: alfalfa and others, as a rule, savoring the vegetative part of these plants. By the end of the summer, birds are frequent guests in the fields. There, belladonna cranes feed on the fruits of the new crop.

But belles are not only vegetarians, they can hunt insects , snakes , lizards and even small rodents, but only during special periods of building nests and raising offspring. 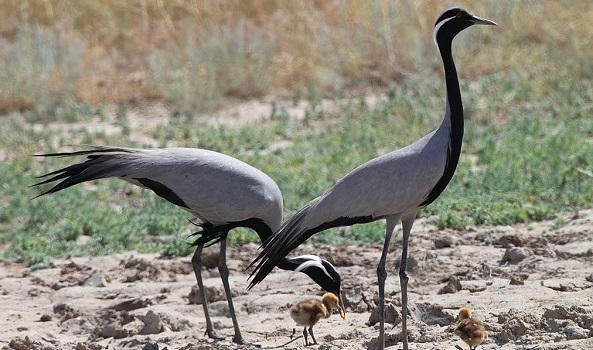 Shortly after birth, chicks are already able to go in search of food with their parents. The family of belladies moves in a single file, where the male follows first, his girlfriend follows him, and the chicks, which are usually two, keep up with them.

In captivity, belladonnae are fed with mixed food, giving birds grain and vegetables, and also adding cottage cheese, fish and meat to the diet, often in the form of small rodents: mice and others. On the day belladonna is able to consume about 1 kg of food.

Propagation and longevity of the crane belladonna

The cranes of the belladonna nest in the steppe and semi-desert areas, choosing foothills and plains covered with rare cereals and wormwood, not far from water bodies and lakes. But these birds usually avoid swamps.

Male deer are larger than their girlfriends. By creating couples, birds retain their alliances for life, preferring a monogamous lifestyle. There are beautiful legends about their loyalty, where they appear as people denounced as feathers of birds. 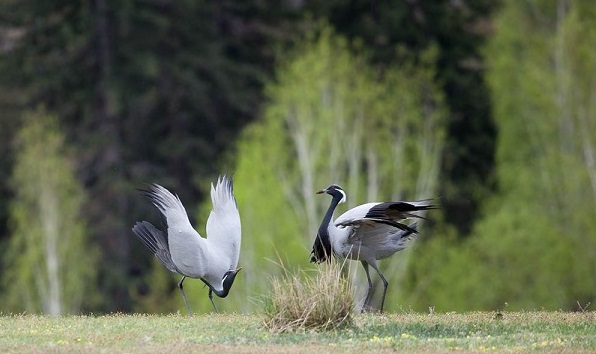 The period of courtship takes place very beautifully in birds, representing an almost artistic ritual. Relationships of birds begin even during the wintering in common flocks.

Love belles, choosing a partner, begin to engage in dialogues with a series of melodic sounds. Publishing them, they throw back their heads and lift the beak upwards. Duet singing is complemented by dancing. Birds flap their wings and jump, throwing sticks and tufts of grass into the air.

At a similar spectacle going to the audience. Kinsmen-belles appear in a circle formed from two or three rows. And in the middle of it, the heroes of the occasion are dancing, publishing trumpeting cries.

Further, the situation changes, and other couples are in the spotlight. Such dances are a model of entertainment, energetic plastics and can not be described . The cranes of the belladium are soon finally divided into pairs, and by the end of spring they are completely captured by the process of reproduction. 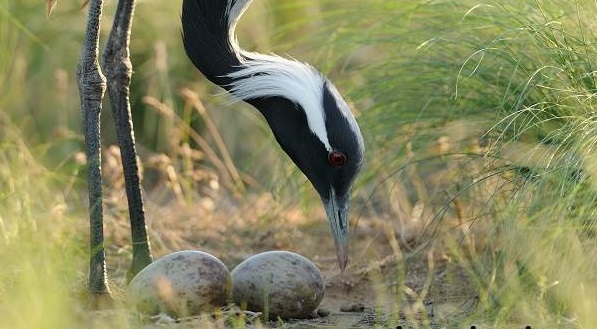 In the photo the nest of the crane

Nests are built, which are shallow pits dug right in the ground, birds build them up by surrounding them with grass, sheep droppings or just pebbles. They create not just comfort, but camouflage the abode of future chicks from enemies and invaders.

Soon, the bellow mom lays a couple of eggs in the family nest. They weigh a little over one hundred grams and have an interesting coloring, covered with red spots on a brown-olive background.

Parent couples take care of future offspring together. The father guards family peace from strangers, looking from the high hill. And his girlfriend hatches eggs, ready at the signal of the male to move away from danger.

Carefully disguised, their nest is difficult to detect for enemies. But in some cases, both parents are ready to safely protect offspring from opponents such as foxes , dogs or birds of prey . 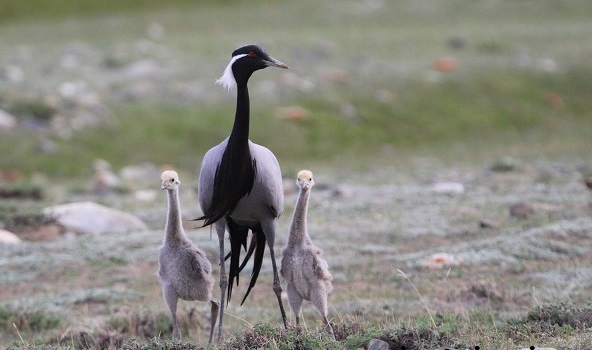 In the photo Anthropoides virgo with chicks

This period lasts about 4 weeks, until the children hatch. If the eggs are lost, it is often the spouse demoisans have time to make a new laying. Broods are usually held by parents near small bodies of water.

The offspring is growing rapidly, and after a couple of months already learning to fly. But kids leave their parents not soon, only next spring. After a couple of years, the youngsters create their own family hearth.

The belladies live for about two decades. But in captivity recorded longevity. In some cases, these birds reach the age of 67 years, which is completely impossible in the wild, full of dangers.