One of the most unusual and mysterious fishes, first mentioned in the scientific literature only in 1822, which truly amazes with its size and value of fish meat, is arapaima, which lives in freshwater bodies of tropical climate.

Features arapaymy and its habitat

Arapaima gigantic, or piraruku, occurs most often in the fresh waters of the Amazon. This species became known to the Guiana and Brazilian Indians and got its name due to the red-orange color of meat and bright red spots on the scales (“Piraruco” — red fish). 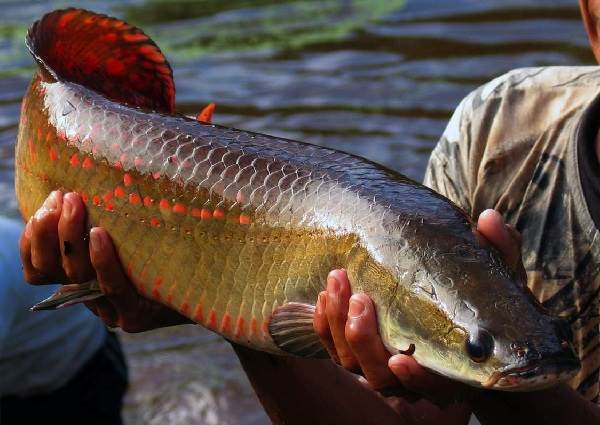 The habitat depends on the climate and conditions of the environment in which the fish lives. In the rainy season, they live in the depths of rivers, drought easily burrow into the cool sand and silt, and can easily survive even in wetlands.

Arapaima fish is one of the most gigantic fish in the world. According to some official sources, the weight of some individuals can freely reach two centners, and its length sometimes exceeds two meters.

One of the main features of an individual is the extraordinary strength of ribbed scales, it is 10 times stronger than bones and it is problematic to pierce it, its strength is comparable to the shell. It was this fact that allowed Piraruke to successfully adapt to living near piranhas. The popularity of this type of fish in their habitats is conditioned not only by its large size, but also by the fact that it is hardly possible to meet an adult in the wild.

For many centuries, this fish was considered the main food of the Amazonian tribes. It is the large size of the fish and its ability to rise too often to the surface of the water and even jump out of it in search of prey has become disastrous — it was easily taken out of the water with the help of nets and harpoons. 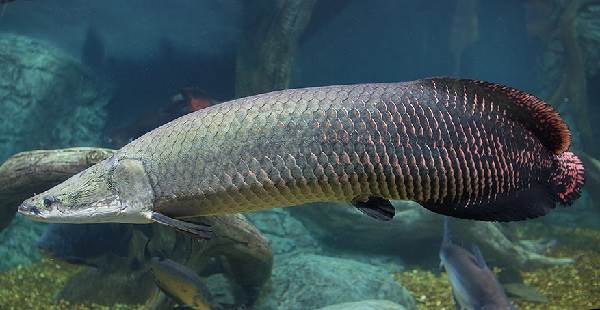 The unusual structure of the arapayma body allows this fish to successfully hunt: the streamlined shape of the body and tail, conveniently located fins allow the lightning speed to react to the approach of prey and grab it. Currently, the giant Pirarucis population has been reduced, and catching Arapaimi is prohibited.

The nature and lifestyle of arapayma

Arapayma fish is the largest aquatic predator; it lives in the fresh waters of the Amazon, where civilized people appear very rarely: in the forests of Brazil, Peru, and Guyana. It feeds not only on medium and small fish, but also does not hesitate to profit from birds and carrion in the dry season. A body pierced by small blood vessels located close to fish scales allows you to hunt on the very surface of the water.

The peculiarity of the structure of the swim bladder (ovoid shape) and the narrow body make it quite easy to survive the drought, adapt to adverse environmental conditions, survive the lack of oxygen.

Due to the extremely poor oxygen content in the waters of Amazonia, arapaima is forced to float on its surface every 10-20 minutes in order to noisily swallow air. This fish can not be called aquarium, however today it is bred in captivity. Of course, it will not reach large sizes and body mass, but a little more than half a meter can be obtained with ease. 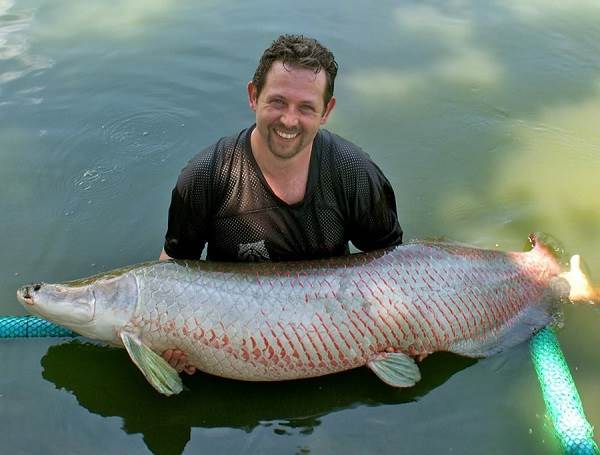 Artificial breeding of fish, although it is troublesome, is widespread everywhere: in the countries of Latin America, Europe and Asia. They can be found in large aquariums, zoos, artificial ponds, adapted for fish farming.

Piraruku is settled separately from other species (to avoid eating them), or with other large predatory fish. In the conditions of arapayma nurseries can live for about 10-12 years, in captivity.

The giant arapaima fish is a predatory species and feeds exclusively on meat. An adult individual piraruci under favorable conditions is selective in the choice of food, as a rule, its diet includes small and medium-sized fish, sometimes birds and small animals sitting on the branches or descending to drink water. 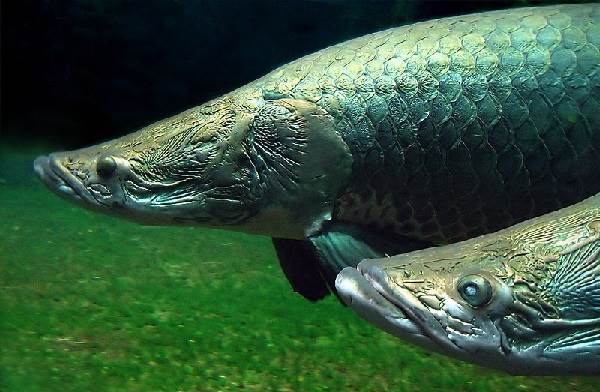 The young are more voracious, in the period of active growth they devour everything that comes their way: larvae, fish, carrion, insects, invertebrates, small snakes, birds and vertebrates.

Reproduction and life expectancy of arapayma

Externally, the male at a young age is not much different from the female arapayma. However, in the period of puberty and readiness for spawning, the body of the male in the gills and fins is several times darker and brighter than that of the female.

Whether the female is ready to reproduce offspring can be judged by the length of her body and age: she must be at least 5 years old and no shorter than one and a half meters. In the hot dry climate of the Amazon, spawning occurs at the end of February — beginning of March. 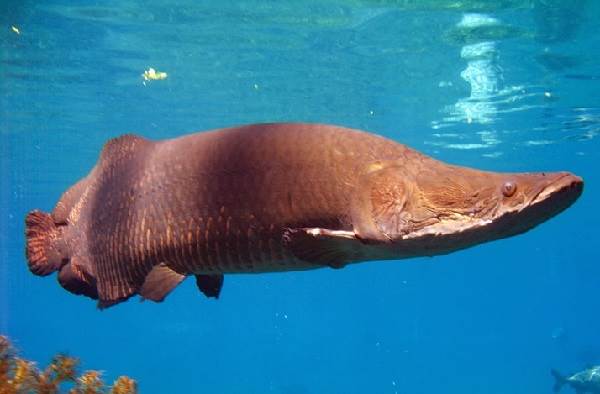 Usually, during this period, the female begins to equip herself with a place where she will later lay her eggs. Piraruka-female often for these purposes chooses on a sandy bottom, where there is practically no flow, and the depth is small.

With its long, agile body, the female pulls a deep hole (approximately 50-80 cm deep), where she lays large eggs. As soon as the rainy season begins, the caviar already set aside earlier burst and fry emerge from it.

It is noteworthy that arapayma, as most freshwater fish do, does not abandon hatched fry, but looks after them for another three months. Moreover, the male itself remains with the female, and it is he who ensures that the roe is not eaten by predators.

The role of the female after laying eggs is reduced to protecting the area around the nest; she constantly patrols the place around at a distance of 15 meters from the nest. Food for the young becomes a special white substance that is found on the male’s head (just above the eyes).

This food is very nutritious, and already a week after the birth of the fry, the fry begin to eat “adult” food and disperse, or rather spread, who where. The young growth is not fast, on average the total monthly increase in growth is no more than 5 cm, and in weight not more than 100 grams. 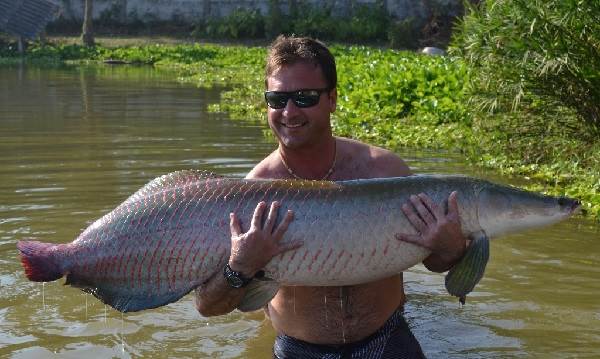 Thus, despite its rather unattractive appearance, arapaima attracts the attention of aquarists and fishing enthusiasts. This fact is connected with the fact that the predator is able to reach truly gigantic sizes, and this is not given to all freshwater fish.

It is enough to look only once at the appearance of the piraruca in order to remember forever exactly how this species of fish looks. This fish is an opportunist; it is this trait that allowed it, known even in the times of Brazilian and Guiana Indians, to live to this day.

In aquarium conditions, it is quite problematic for arapaym to be diluted due to the fact that it requires too large aquariums with a volume of more than one thousand liters, constant water filtration and a specially maintained temperature not lower than 23 degrees with a hardness not exceeding 10.