Description and features of araukana breed

Among the types of chickens that people have been breeding since ancient times, there are many breeds. And in this list there are very unique varieties. 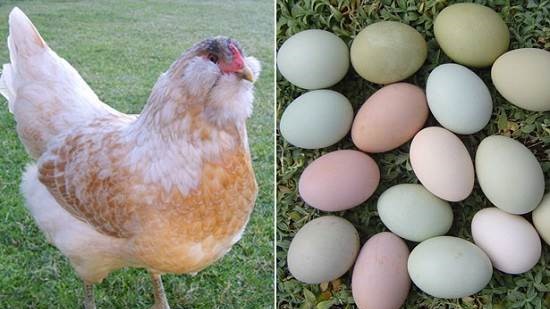 In the photo araukana chicken

These include chickens Araucans. Their description can be started with the following characteristics, subject to a strict standard defined in Europe in the last century.

Representatives of the breed do not differ in special sizes:

But besides the relatively ordinary signs, as can be seen in the photo, the Araucans are distinguished by quite colorful features of appearance: feather long sideburns, beard and mustache, adorning the head. 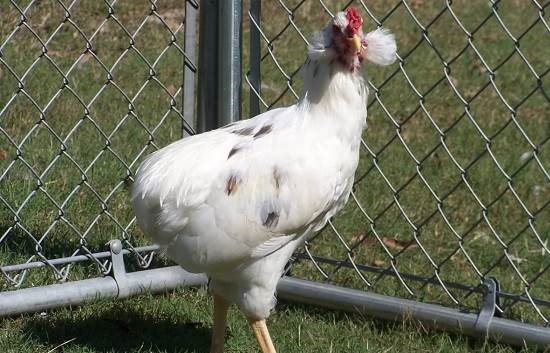 Plus, nature has provided them with red «earrings», that is, tassels hanging from small ears. The neck of the birds of this exotic breed is of medium length, the back is straight and wide, the chest is slightly convex, the constitution is dense, and the strong long legs are distinguished by a green-blue shade.

There is also another interesting feature of this species — the absence of a tail, as evidenced by the photo. Araucan chickens are either devoid of this detail from birth, or their tails are removed shortly after their birth.

The reason for such a requirement of standards lies in the history of the breed, because once individuals during breeding were selected for cockfighting. And the conformity of masculine qualities was determined not only by their ability to fight, but also by the absence of caudal vertebrae, which, as it was believed, interfered during the fierce battles with opponents of the Arakuan cock. 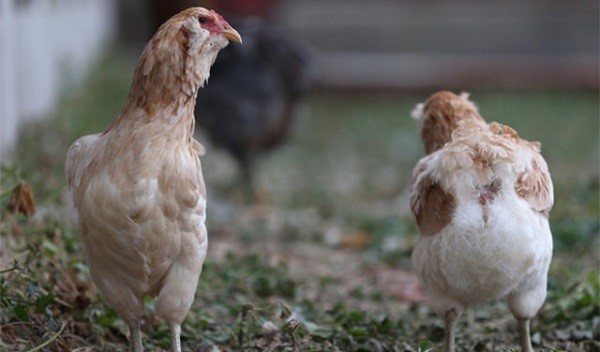 However, in modern breeding, the breed belongs mainly to a very rare, decorative-egg direction. And for this there are good reasons hidden in another unique ability of the breed.

Arakuan chickens carry greenish-blue or turquoise eggs, which are not worse than the most common chicken eggs. Rare tint occurs due to the presence in the shell of a special pigment biliverdin.

However, as practice shows, a similar color in many cases disappears without a trace when the araukan is crossed with other breeds of chickens in the first generation, and the eggs of hybrids, very often, become the most ordinary. 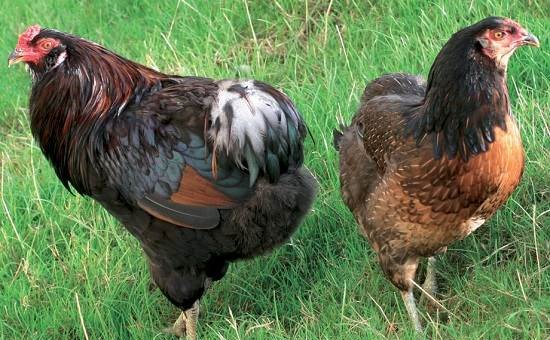 The shade of the feathers of the impressive birds of the described breed differs in an enviable variety and depends on the subspecies. According to the standard, there are:

In total, according to the required characteristics, twelve colors of this breed of hens are allowed.

Care and maintenance of Araukan chickens

When setting up a chicken coop for birds, their lifestyle and character should be considered. It is better to keep the Araucan breed in cages by small families. It is also possible to place them in suitable-sized cells, where a pair of females and a rooster are fully capable. When kept in aviaries the number of chickens can be increased to eight.

Females of this breed are, as a rule, quite peaceful and calm. But roosters, especially in the spring, often show signs of aggression and start fights with strangers. 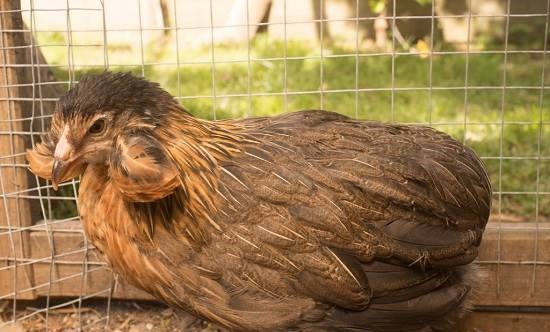 These badass even able to pounce on the owner, if they did not like his behavior or something angry and aroused suspicion. Considering the similar hostility and absurd nature of the males, the hens of the Araucan should be placed in separate from other breeds nests, equipped with roosts and feeders.

Such chickens fly badly, so the cages for their maintenance may not be too high, but the walking for birds should be equipped necessarily. Heating to chickens is necessary only during the frost period, they tolerate cold well and at moderate temperatures (down to -8 ° C) do not need additional heating. 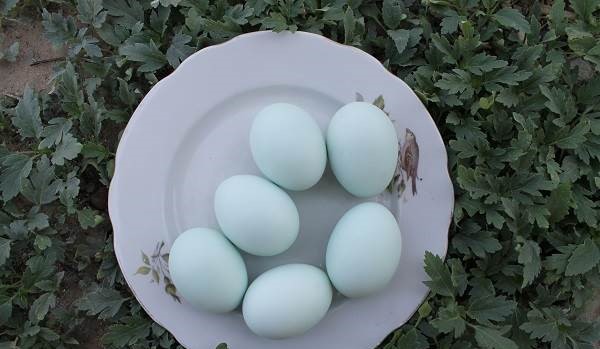 On a photo of eggs of Araukan chickens

With good content and proper nutrition, Araucan can produce up to 180 eggs per year. Usually, chickens begin to make the first egg-laying at the age of six months, but often there are delays.

Experienced dogs connect this with a number of reasons, the first of which is bird obesity. To cope with this problem, it is necessary to reduce the rate of feeding, at least for a month.

In addition, the ability of the Araukan to bring eggs can be delayed if the hen belongs to the late: autumn or winter brood, therefore it is very important to take into account this fact to the prospective owner of the birds when buying them.

It is considered normal that the color of the eggs may vary with the season, and during the cold period they may become less bright. And on this occasion you should not worry at all.

Usually eggs of such breeds weigh about 60 grams or more. There are instances of smaller sizes and weights. This, again, is not a violation of the rules, and most often these eggs belong to one of the subspecies of the breed — the dwarf Araucan

Cultivation and food of breed of araukan

The breed of hens Araucan, amazing property to give their owners multi-colored eggs, has Chilean roots, and the name received by the name of an Indian tribe, whose members are similar poultry and were bred long before Columbus discovered the continent. 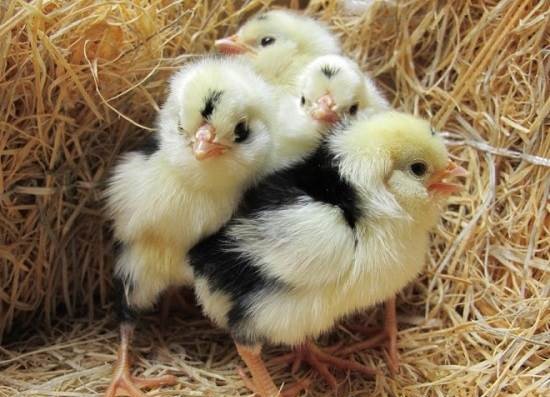 According to some sources, this was done by crossing chickens with wild pheasants or birds of similar species. After the mass development of America, Arakuans came to the European continent, but only in the last century were officially referred to the German standard, which determined the main characteristics for this breed of chickens.

There are, of course, other views on strict requirements. The British, for example, believe that the absence of the tail of the Arakuan is not at all necessary, but the tuft will certainly adorn these birds. It is useful to know to amateur kurovods that often the lack of a tail interferes with roosters during mating, which is, perhaps, related to some minuses of the breed.

One should start breeding such poultry by purchasing chickens or a pair: chicken and rooster, but not buying eggs, in the hope that chicks will hatch from them — owners of the necessary external parameters and useful characteristics. 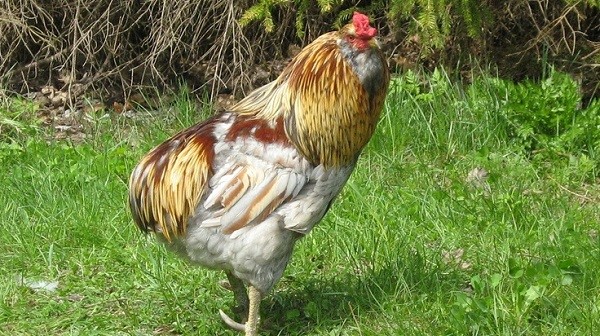 This is done to have perfect confidence in the purity of the breed, which is easily confused with other, for example, Easter chickens and some other unusual species due to the similar color of eggs.

In addition, it is very useful for lovers of catering to the information that the chicks of araukan, up to a certain age, are difficult to accurately determine the sex. This is due to the peculiarities of the structure of the scallop and other external factors, which makes it difficult to properly disperse the birds in the nests.

Only after 12 weeks do kosits appear around the neck of roosters, helping to distinguish them from chickens, which makes it possible to correctly form chicken families. Such birds, having a small size, with an excessive diet, easily become fat, which can be reflected in a negative direction on the ability to carry eggs.

It is better not to allow this, not allowing the poultry to overeat, but to fully provide the feed with the mineral substances necessary for the healthy development and formation of a strong shell of an unusual color, which Araucan eggs are famous for.

To provide chickens with valuable mineral dressings, it is better to build additional feeders, regularly filling them with small shells, gravel and chalk. 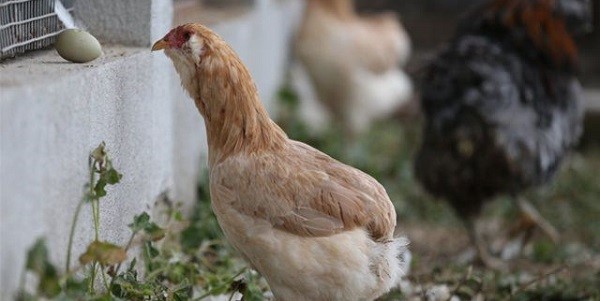 Also needed as a valuable nutritional supplement is a special coniferous meal. And in the diet it is necessary to include greens, fruits and vegetables. Grain in dry form for complete digestion of chickens is not quite suitable, it is better to prepare special mash. But it is especially important that the feeding of birds, in addition to the above, be supplemented with bran, oilcake, pumpkin, cabbage leaves and bone meal.

Chickens of this breed have always been considered excellent chickens and were distinguished by an exceptional maternal instinct, which is confirmed by the feedback from owners of birds seriously engaged in their breeding.

These pets do not reduce the productivity of the egg carrier, depending on stressful circumstances, changes in housing conditions, the vagaries of the weather or the onset of molting period.

Exceptions can be only during transportation and change of place of detention, which for a couple of weeks may affect the ability of chickens to fully lay eggs. 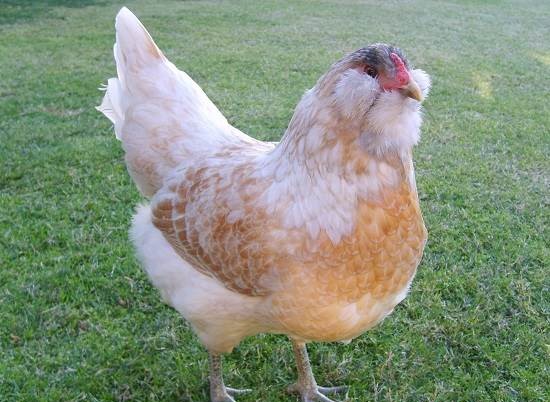 All the above-described properties and the original color of eggs make the aura content of araucana convenient, and it is enough to buy and breed representatives of such a breed of domestic birds.

But finding a good breeder who supplies in Russia chickens that meet accepted standards is quite difficult. And the risk of becoming an object of deception is too great and, instead of purebred specimens, individuals that have little to do with the characteristics of the breed.

There are enough negative reviews from dissatisfied customers who have committed such transactions, therefore, choosing a breeder, you should be more careful and use the services of professionals.

The price of araukan is 250 rubles, this is the approximate cost of day-old chicks, which, according to reviews, are best bought at the beginning of the season, but not in summer or autumn.