Argiopa spider. Way of life and habitat of an argiopa

Features and habitat of an argiopa

Argiop Bryunnikh’s spider treats an araneomorfny look. This quite large insect, males more small than females. The body of an adult female individual can reach from 3 to 6 centimeters though there are also exceptions in the big party. 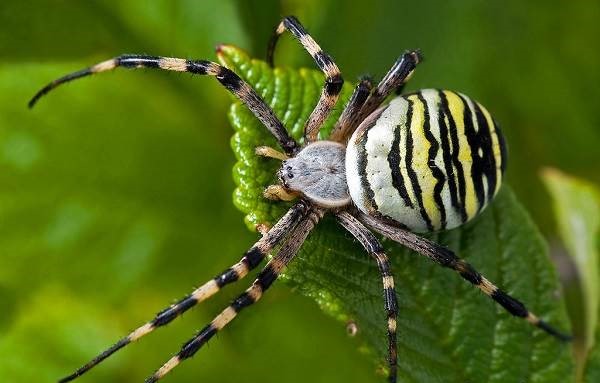 Males of an argiopa, on the contrary, have the small sizes — no more than 5 millimeters, besides, the narrow small body of the boy is usually painted in ordinary-looking monophonic gray or black color with the light belly and two dark strips on it located along sides. On light feet poorly expressed, indistinct rings of a dark shade. Pedipalpa crown male genitals, differently — bulbusa. 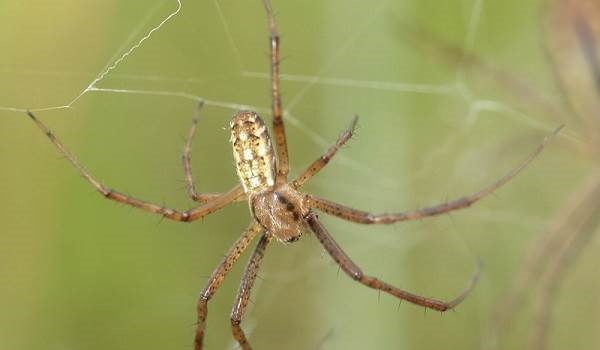 On a photo spider of an argiop male

The female differs not only the size, but also the general appearance. A female individual of an argiopa black-yellow in a strip, with the black head, on a rounded oblong body there are small light hairs. If to consider, beginning from a golovogruda, the 4th strip differs from the others in two small hillocks in the middle.

Some scientists describe feet of females as long, thin, black with beige or light yellow rings, others consider on the contrary: feet of a spider light, and strips them banding — black.

Scope of extremities can reach 10 centimeters. In total at a spider of 6 couples extremities: 4 couples are considered as feet and 2 — jaws. 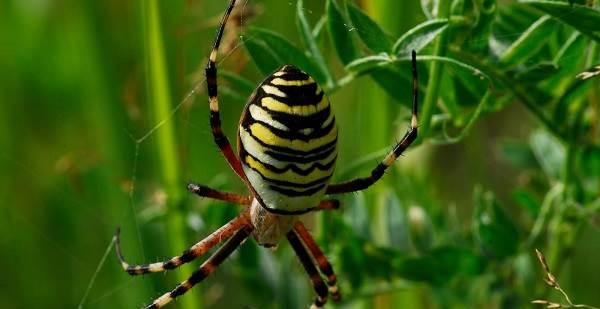 On a photo spider of an argiop female

Pedipalpa quite short, remind feelers more. Because of the combination of black and yellow flowers expressed by strips and on a body and standing the argiopa is called «spider wasp». The beautiful color of a spider also helps it not to become a lunch for birds, after all in fauna bright colors testify to availability of strong poison.

One more is happy a widespread version — an argiopa lobular, or otherwise — an argiopa of a lobat. The spider received the first name because of an unusual shape of a body — its flat stomach is at the edges topped with sharp teeth.

Argiopa of a lobat on a photo reminds a small bush pumpkin with long thin legs. 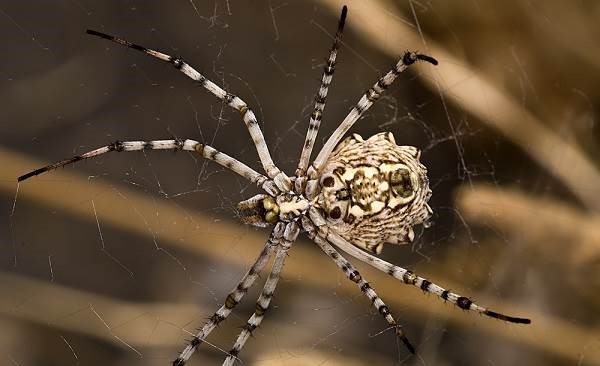 Representatives of a look are widespread worldwide. They meet in Africa, Europe, Asia and Central Asia, in the majority of regions of the Russian Federation, Japan, China. As a preferable place of life meadows, edges, any other places which are well lit with the sun act.

Often the question «sounds the spider of an argiop is poisonous or not «, the answer on which — is unambiguous yes. As well as the majority of spiders of an argiop it is poisonous, however for the person it doesn’t constitute absolutely any danger — his poison is too weak.

The insect doesn’t express aggression in relation to people, only the female of an argiopa and only if to take it on hands can bite. 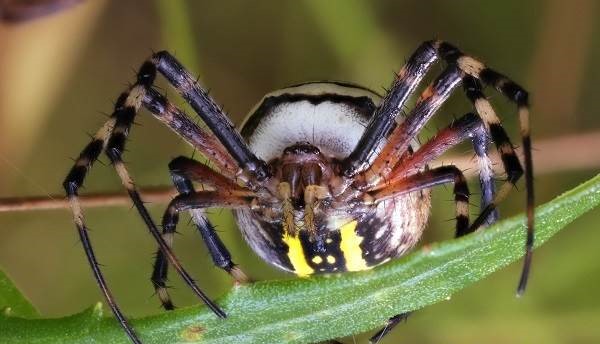 However, despite weakness of poison, a sting can cause painful feelings as stings enter deeply under an integument. The sting place reddens practically at once, slightly swells up, grows dumb.

Pain recedes only later a couple of hours, but the tumor from a sting of a spider of an argiopa can keep some days. Seriously people need to be afraid with an allergy to stings of this sort.

Character and way of life of an agriopa

Representatives of a type of an argiop of the bryunnikh usually gather in not numerous colonies (no more than 20 individuals), lead a land life. The network is fixed between several small stalks or blades. 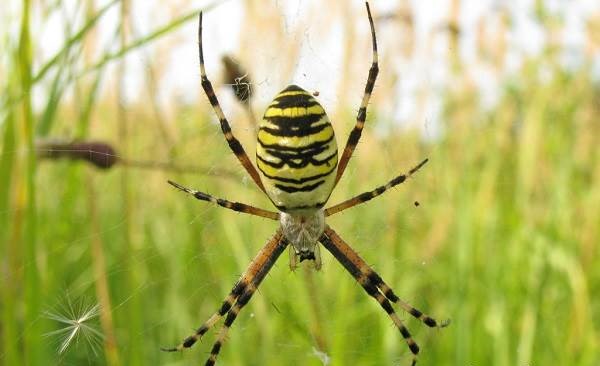 On a photo spider of an argiop of the bryunnikh

Argiopa — a spider spinning circles. Its networks differ in very beautiful, equal pattern and small cells. Having arranged the trap, the spider nestles in its lower part and patiently waits until production itself welcomes in his possession.

If the spider scents danger, he will immediately leave a trap and will go down on the earth. There the argiopa settles down a paunch up, having whenever possible hidden cephalothorax.

However, in certain cases the spider can try to drive away danger, having started shaking a web. Thick threads of a stabilimentum reflect light which merges in a bright spot, an origin, unclear for the enemy. 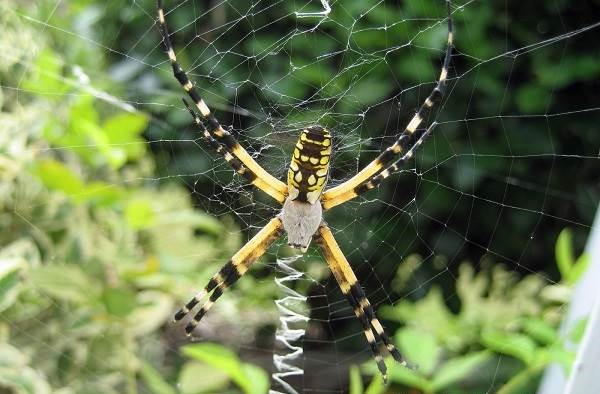 Argiopa has quiet character, having seen this spider in the wild nature, it is possible to consider it in rather short distance and to photograph, he isn’t afraid of the person. During morning and evening twilight, and also at night when on the street it is cool, the spider becomes sluggish and inactive.

Most often grasshoppers, front sights, mosquitoes become the victims of the webs which are at small distance from the earth. However, what insect wouldn’t get into a trap, the spider with pleasure him will regale.

As soon as the victim concerns silk threads and reliably to them sticks, the argiopa comes nearer to it and uses poison. After its influence the insect ceases to resist, the spider quietly winds it with a dense cocoon of a web and at once eats. 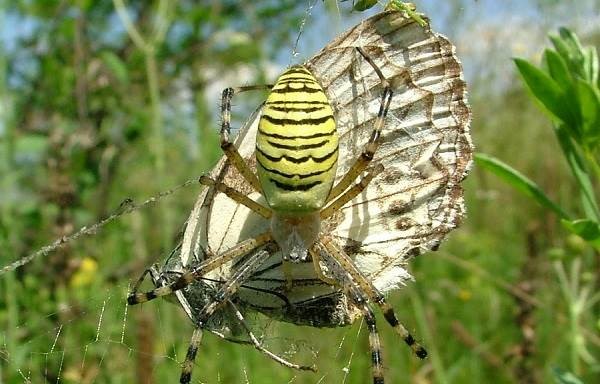 The spider of an argiop of a lobat does installation of a trap in most cases in the evening. All process takes from it about an hour. As a result quite large round web in which center is stabilization (a zigzag pattern which consists of well noticeable threads) turns out.

It is a distinctive sign practically of all krugopryad, however the argiopa is allocated and here — its network decorate for a stabilimentum. They begin in the center of a trap and disperse to its edges.

Having finished work, the spider takes the place in the center, image peculiar to it having arranged an extremity — two left and two right forepaws, also as well as two left and two right hinder legs are pulled so together that from far away it is possible to take an insect for the letter X hanging on a web.

Preferable food of an argiopa of the bryunnikh are pryamokryly insects, however the spider doesn’t disdain also any other. 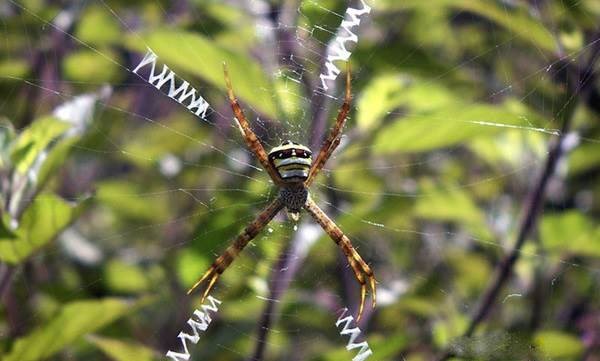 Pronounced zigzaobrazny stabilimentumama reflects an ultraviolet, thereby trapping the victims of a spider. The meal often occurs already on the earth where the spider goes down, having left a web to regale in a secluded place, without excess observers.

Reproduction and life expectancy of an agriopa

As soon as there passes the molt marking readiness of a female for pairing there is this action as helitser of a female some time still remain soft. The male foreknows when it happens, after all he can wait for long time of the necessary moment, hiding on the edge of a big web of a female somewhere.

After a coition the female immediately eats the partner. There were cases when the male managed to escape from a web cocoon which is spun by a female, flight, however, the following pairing already for certain will become fatal for the lucky. 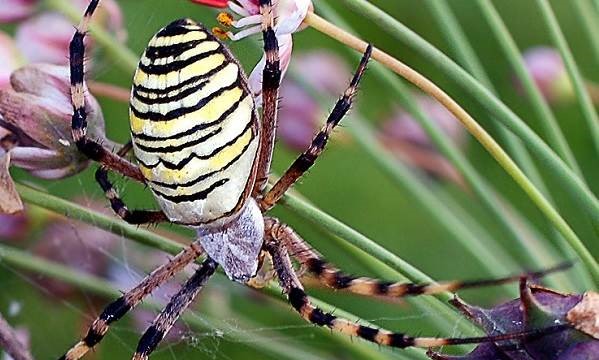 It is caused by existence at males only of two extremities playing a role of bodies of copulation. After pairing one of these extremities disappears, however, if the spider manages to escape, there is one more.

Before a laying future mother weaves a dense large cocoon and has it near a lovchy network. Exactly there it in a consequence postpones all eggs, and their quantity can reach several hundred pieces. All the time being nearby, the female carefully protects a cocoon.

But, with approach of cold weather the female dies, the cocoon exists in an invariable look all winter and only in the spring of a pauchat come to light, being settled in different places.

As a rule, for this purpose they move by air by means of spider lines. All life cycle of an argiopa of a bronnikha lasts 1 year.