Axolotl is the larva of ambystoma, one of the species of the amphibian caudate. This amazing animal is inherent in the phenomenon of neoteny (with the Greek. «Youth, stretching»). 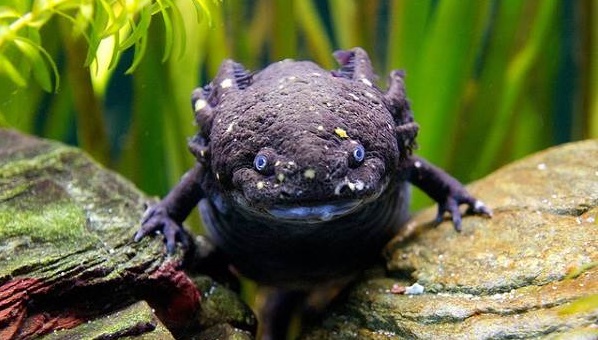 The hereditary lack of the thyroid hormone prevents the amphibian from moving from the larva stage to a full-fledged adult. Therefore, axolotls still live in this phase, reaching puberty and ability to reproduce, without undergoing metamorphosis.

Axolotls are commonly called larvae of the Ambist species of two types: Mexican Ambystomy and Tiger Ambistomy. In the wild, the ambystom can be found in two forms — neotenic (in the form of a larva), and terrestrial (a developed adult). 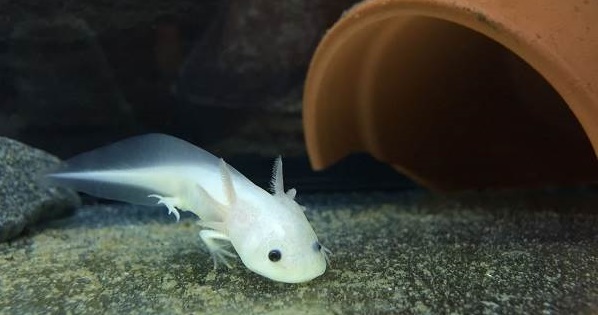 Features and appearance of the axolotl

In literal translation, the axolotl is a “water dog” or “water monster”. In the photo, the axolotl does not look threatening. Rather, he looks like a cute home dragon. This resemblance gives the axolotl three pairs of symmetrically protruding gills at the head of the head, resembling fluffy twigs.

They help the animal to breathe under water. Axolotl is one of those rare amphibian species that, in addition to the gills, also has lungs. The animal switches to pulmonary respiration, when the living conditions change, or oxygen in the water is not enough for normal life.

With prolonged use of such breathing, the gills will atrophy. But the axolotl is not afraid. The little dragon has the ability to regenerate its tissues and, if necessary, the gills can recover. 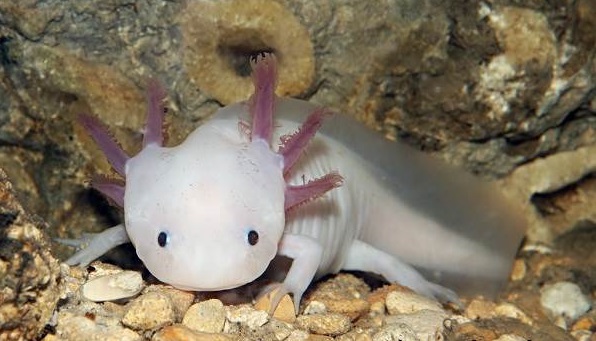 A kindly «water monster» gives small round eyes on the sides of a flat muzzle and a wide mouth at the bottom of the head. It seems that the axolotl is constantly smiling, arriving in an excellent mood.

Ambystoma larvae, like all amphibians, are predators. The teeth of the animal are small and sharp. Their function is to hold, not tear food. The length of the axolotl reaches 30-35 cm, the females are slightly smaller. The long, well-developed tail helps the amphibian to move easily in the water.

Axolotl spends much of its time at the bottom. Two pairs of paws end in long fingers, with which he clings to the stones to make a push when moving. In natural habitat, axolotls of brown color, with dark peas scattered throughout the body, are most common. 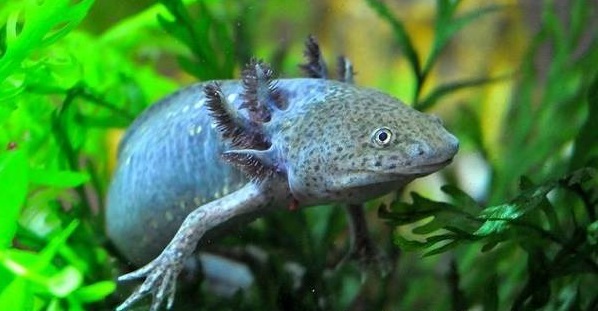 Domestic axolotls are usually white (albino) or black. Because of their characteristics, these animals are of considerable interest in scientific circles. In laboratories, the conditions of axolotl content are close to natural. Amphibians breed well, delighting scientists with new skin color shades.

Axolotl are common in the lakes of Mexico — Xochimilco and Chalco. Before the invasion of the Spaniards, the locals feasted on ambist meat. In taste it is similar to the tender meat of eel. But in the process of urbanization, the number of axolotls significantly decreased, which led to the introduction of this endangered species in the Red Book.

I am glad that the salamander feels great at home. Axolotl is one of the most common pets lovers of aquarium amphibians.

In the wild, axolotls spend their entire lives in water. Choose deep places with cold water and plenty of vegetation. The lakes of Mexico, with floating islets and land necks, connecting the canals, have become the ideal home for water dragons. 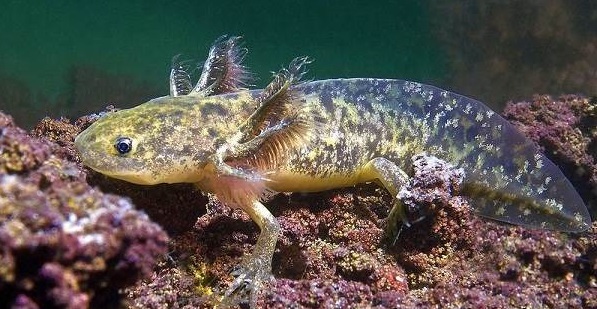 The habitat of axolotl is quite extensive — about 10 thousand kilometers, which makes it difficult to accurately count the remaining individuals.

The biggest problem with keeping an axolotl at home will be maintaining a certain water temperature. Animals feel good at temperatures from 15-20C. The border mark is 23C. The oxygen saturation of water depends on its temperature.

If the water is too warm, the pet starts to hurt. It is recommended to install an axolotl in the aquarium cooling water equipment, but you can also resort to the advice of experienced salamander breeders.

A plastic bottle of frozen water is lowered into the water, thereby lowering the overall temperature in the aquarium. The second bottle should always be ready in the freezer. Choosing the capacity for the maintenance of axolotl, proceed from the volume of 40-50 liters per pet. Water is poured medium or high hardness, purified from chlorine.

The bottom of the aquarium is filled with river sand, adding a few medium-sized stones. Small pebbles are not recommended, as the axolotls swallow the ground along with food.

If sand leaves the body freely, the pebbles can clog up the amphibian excretory system, which leads to disastrous consequences for the animal. Axolotli love to hide in shelters, so make sure that there are hiding places in the aquarium.

For this fit snags, pots, large stones. The important point — all items should have a streamlined shape. Sharp surfaces and corners easily injure the delicate skin of an amphibian.

The presence of plants in the aquarium is also very important. In the breeding season, axolotls lay eggs on their stems and leaves. Water change is carried out once a week. Half the volume is poured out and supplemented with fresh water. 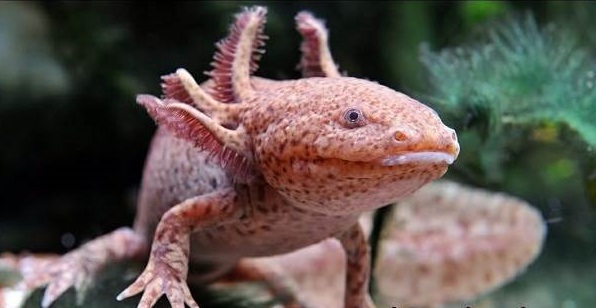 Empty the aquarium every month and do a general cleaning. It is extremely undesirable to leave in the water the remains of food and natural secretions of pets. With the decomposition of organic matter, substances that adversely affect the health of the amphibian are released.

To keep the axolotl in the aquarium should be separate from other aquatic inhabitants, including fish. The gills and thin skin of the dragon can be attacked, causing damage, causing him discomfort, and in some cases leading to death. The only exceptions are goldfish.

As a predatory amphibian, the axolotl consumes protein in food. With pleasure eats worms, cockroaches , crickets , meat of mussels and shrimps, dry food for predators in the form of tablets. It is undesirable to give live fish to the salamander, as many of them are carriers of various diseases, and axolotls are very susceptible to them. 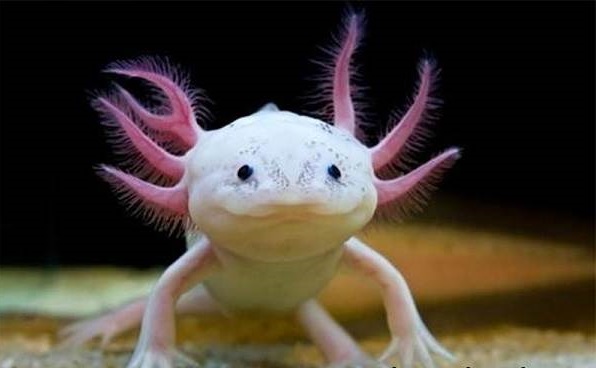 Banned meat of mammals. The dragon’s stomach is not able to digest the protein found in such meat. Reproduction occurs quite easily. Individuals of different sexes are placed in the same aquarium. The female and male are the size of the cloaca.

The more visible and protruding cloaca is in the male. Smoothed and almost invisible — in the female. After a short marriage flirting, the male produces clots of spermatophors. The female with its cloaca collects them from the bottom and in a couple of days lays on the leaves of the plants fertilized eggs with fry.

Depending on the conditions, the axolotl children hatch into light in two to three weeks. The babies are fed with nautilia of Artemia, as well as tiny worms. Daphnia is also a suitable food during this period. 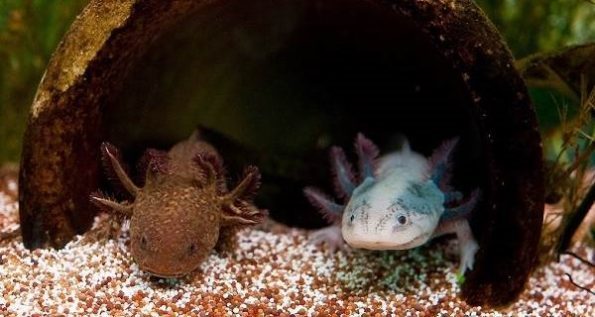 In natural habitat, the life of the axolotl reaches 20 years. When kept at home — the life expectancy is reduced by half. You can buy axolotl in pet stores that specialize in the sale of water pets: fish and various amphibians.

Online stores also provide an opportunity to purchase axolotl aquarium fish . The price for axolotl varies from 300 rubles per larva, and within 1000 rubles per adult.