Animal ai ai (also known under the name of aye-aye or Madagascar melee ) is attributed to the order of primates and is well known to viewers of the animated film «Madagascar.» 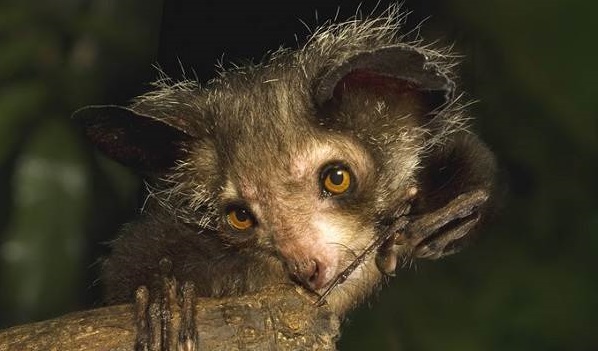 The personal adviser to the king of lemurs, the wise and balanced Maurice, belongs precisely to the representatives of this rare family. For the first time, an animal caught the eye of researchers only at the end of the eighteenth century, and for a long period of time they could not rank it among one group or another. Some considered him a rodent, others — a primate, with which the hand has a very remote resemblance.

Features and habitat of the animal ah ah

Ai pet is the owner of a slender and elongated body length of 35 — 45 centimeters. The tail of this primate is very fluffy and exceeds the body in length, reaching sixty centimeters.

Ai ai has a rather large head with large expressive eyes and large ears that resemble ordinary spoons in their form. At the same time, the weight of the Madagascar jacket is rarely more than 3 kilograms.

Mouth ah has eighteen teeth, which are similar in structure to those of most rodents. The fact is that after replacing all the teeth with the root ones, the animal has fangs, but the size of the front incisors is quite impressive, and they themselves do not cease to grow throughout the entire life cycle. 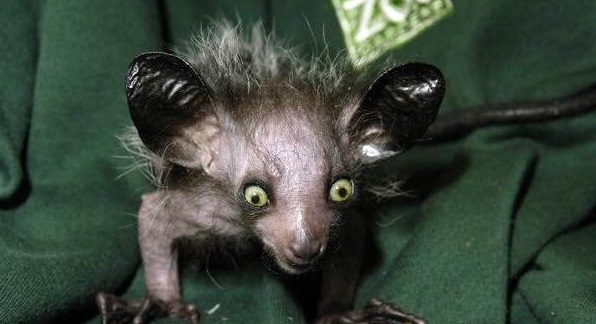 With the help of the front teeth, the knuckle bites through the thick shell of the nut or coarse fiber of the stem, after which, using its long fingers, extracts the entire contents of the fruit.

When you look at an animal, ah, it is immediately struck by its tough and thick coat of brown-brown or black color. Only the ears and middle fingers located directly on the fore limbs are devoid of hair.

These same fingers are an indispensable and multifunctional tool, with which the cone gets its own food, quenches thirst and cleans its own wool.

During the hunt for the larvae and beetles , lurking in the wilds of bark, ah ah for a start knocks it with a «universal» finger, then gnaws a hole and pierces the prey with a fingernail.

This beast is found, as it is easy to guess from its name, exclusively in the depths of humid tropical selva and bamboo thickets of Madagascar. In the middle of the twentieth century, the coopers were on the verge of extinction, but scientists managed to save the population by creating a number of nurseries for it on the island’s territory. 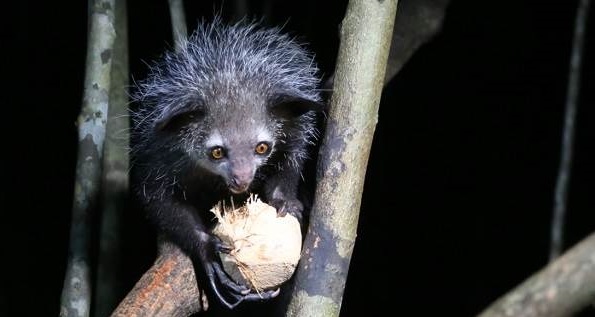 Everything about the animal ah ah knew even the representatives of the ancient Malagasy culture, who had a belief that a person involved in the death of the animal, will surely suffer severe punishment. Perhaps that is why primates managed to avoid the sad fate of being completely exterminated.

Rumps are typical representatives of nocturnal animals, the peak of activity of which falls on the dark time of the day. In addition, the animals are very shy, and are afraid of both sunlight and human presence.

With the advent of the first rays, they prefer to climb into pre-chosen nests or hollows that are high above the ground and go to bed.

The nests in which the animals live are distinguished by an impressive diameter (up to half a meter) and are a tricky structure made from the foliage of special palm trees, equipped with a separate entrance at the side. 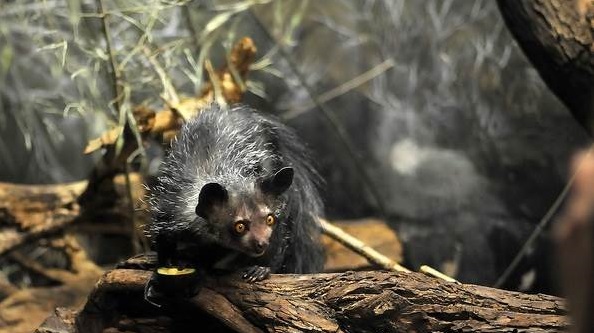 As soon as the sun goes down, ah ah wake up and start various activities. Primates begin to jump from tree to tree in search of food, while making sounds that look like grunting from the outside.

The main period of the night passes at the animals in the sheer vanity with occasional rest breaks. The style of movement of these animals in the tree bark is similar to squirrel , so many scientists have repeatedly tried to classify them as a group of rodents.

The nocturnal animal ah prefers to lead mostly solitary lives, moving within its own territory. However, directly during the mating season, pairs are formed in which matriarchy reigns and dominant positions belong exclusively to the female.

The family couple together is engaged in finding food and caring for the young. During the search for a new habitat, they shout over each other with special sound signals. 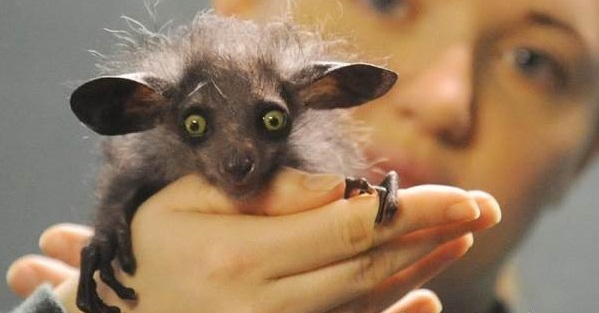 Also, animals are not averse to eat eggs of birds, stolen directly from the nest, sugarcane shoots, mangoes and coconut palms.

Tapping with a multifunctional finger, devoid of hair, helps the animals with great precision to calculate the insects that are hidden under the bark. Gnawing through the durable coconut shell, animals likewise resort to echolocation, unmistakably determining the thinnest spot.

The reproduction of these animals is very slow. For a couple formed after the mating season, for a period of two to three years, only one calf appears, and the female’s pregnancy lasts a very long time (about six months).

In order for the baby to grow in the most comfortable conditions, both parents provide it with a comfortable and spacious nest, lined with grass. The newborn ah feeds on mother’s milk until about the age of seven months; however, even after switching to regular food, it prefers not to leave the family for some time. 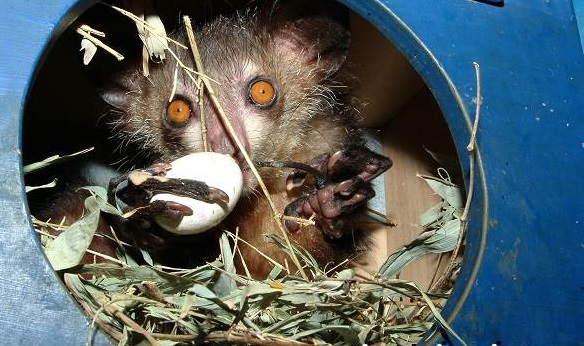 About the life of pets ah, we know very little, because their number today is very small. Find these animals on sale is very difficult, but in order to see them personally, you will have to visit Madagascar or one of the few zoos in which there are suitable conditions for them.

Since there have been no long-term observations of the behavior of animals in the wild, it is quite difficult to establish an average life expectancy. In captivity, they can live up to 26 years or more.