Lake Baikal is the deepest and most beautiful lake in the world. It is there that you can find unique animals that are no longer found anywhere — Baikal seals , endemics, relics of the tertiary fauna. 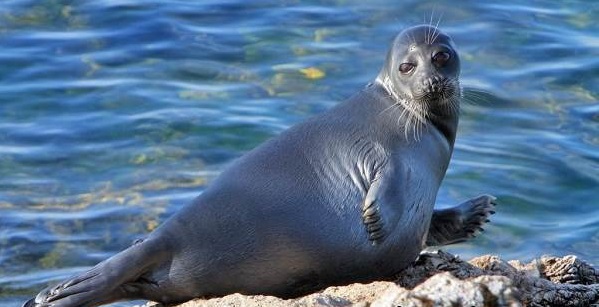 The Baikal seal belongs to the family of seals and forms a separate species. This is the only mammal on Baikal. This wonderful animal was first heard and described during the time of the Bering expedition.

The team included various scientists, including those who were directly involved in studying the nature of the Baikal region. It was from them that the first detailed descriptions of the seal came .

The white-footed animal on Baikal is a rather unique phenomenon. After all, it is customary to think that the seals are indigenous to the Arctic and Antarctic. How did the fact that these animals got into Eastern Siberia still remains a mystery to all. 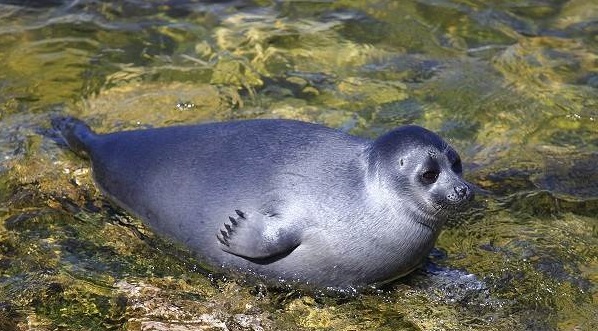 But the fact remains that fact, and this phenomenon makes Lake Baikal even more mysterious and unusual. In the photo of the Baikal seal you can watch forever. Her impressive size and some kind of childish expression of the muzzle seem slightly incompatible.

Features and habitat of the Baikal seal

It is a rather large animal, almost 1.65 cm in height, and weighing from 50 to 130 kg. The animal is everywhere covered with thick and tough hair. It is not only on the eyes and nostrils.

It is even on the flippers of the animal. The fur of the seal is mostly gray or gray-brown in color with a beautiful silvery sheen. Most often the lower part of her torso is lighter than the top. 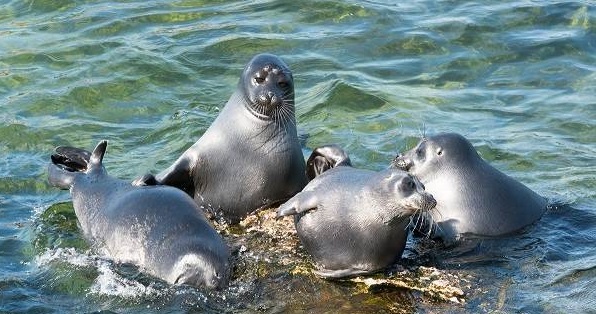 The seal does n’t swim without problems due to webbing on its fingers. Strong claws are well visible on the front paws. On the hind legs, they are slightly smaller. The neck of the seal is almost absent.

Females are always slightly larger than males. In the eyes of the seal there is a third eyelid. After a long stay in the air, her eyes begin to involuntarily water. In the body of the animal just a huge amount of body fat.

The fat layer of the seal is about 10-15 cm. The least fat is in the area of ​​the head and front paws. Fat helps the animal to not freeze in cold water. Also, with the help of this fat nerpa, it is easy to survive difficult periods of lack of food. The subcutaneous fat of the Baikal seal helps it to lie on the surface of the water for a long time. 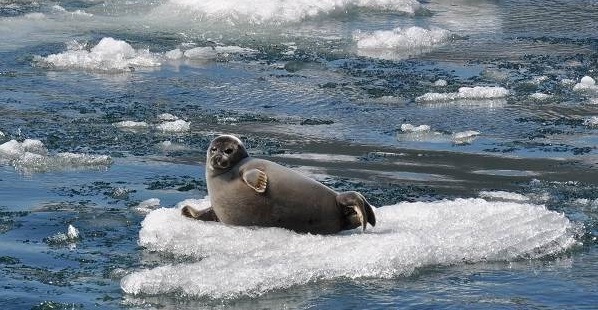 The Baikal seal has a very good sleep

In this position, she may even sleep. They have a very strong sleep for envy. There were cases when scuba divers turned over these sleeping animals, and they did not even wake up at the same time.

The Baikal seal seal lives exclusively on Lake Baikal. It happens, however, exceptions and seals fall into the Angara. In the winter season, they are practically all their time in the underwater kingdom of the lake, and only in rare cases can they appear on its surface.

In order to have enough oxygen under water, the seals make small holes with their sharp claws on the ice. The usual dimensions of such holes are from 40 to 50 cm. The deeper the funnel, the wider it is.

The end of the winter period for this pinned animal is characterized by its exit to the ice. In the first summer month there is a huge accumulation of these animals in the area of ​​the banks of the Ushkani Islands.

It is there that the real rookery of the seals is located. As soon as the sun sets in the sky, these animals begin to move together towards the islands. After the ice floes disappear from the lake, the seals try to keep close to the coastal zone.

The nature and lifestyle of the Baikal seal

It is interesting in the seal that while it is under water its nostrils and the openings in the ears are closed by a special valve. When the animal emerges and exhales air, pressure occurs and the valves open. 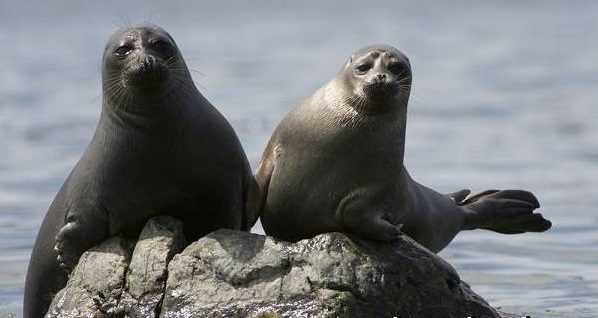 The animal has excellent hearing, perfect vision and excellent sense of smell. The speed of the seal in the water reaches approximately 25 km / h. After the ice is cracked on Baikal, and this happens in the March-May months, the seal begins to moult. At this time, the animal is starving and does not need water. The seal does not eat anything at this time, it has enough fat reserves for life.

This is a very energetic, curious, but at the same time cautious animal. A long time can watch a person out of the water, immersed in it completely and leaving only the head on the surface. As soon as the nerpa realizes that she is spotted from her observation point, she immediately, without the slightest bursts and unnecessary noise, quietly sinks into the water.

This animal is easy to train. They become literally the favorites of the public. There is not one show of Baikal seals, which both adults and children attend with great pleasure. 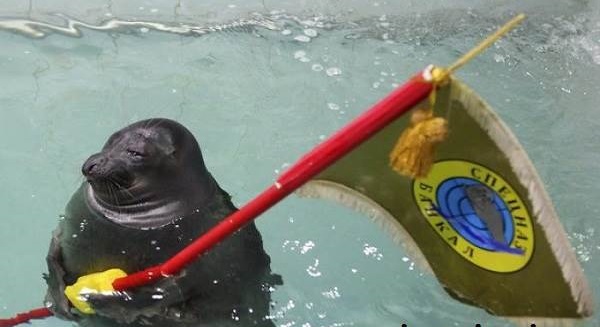 The Baikal seal has no enemies except humans. In the last century, people were very intensively involved in the mining of the seal. It was a colossal industrial scale.

Literally everything that this animal consists of has been applied. The seals were filled with special lamps in the mines, meat was eaten, and the skin was especially appreciated by the taiga hunters.

It was used to make high-quality and high-speed skis. Such skis differed from the usual in that they could never ride back on any steep slope.

So much so that the animal became less and less. Therefore, in 1980, a unanimous decision was made to save him, and the Baikal seal was listed in the Red Book. 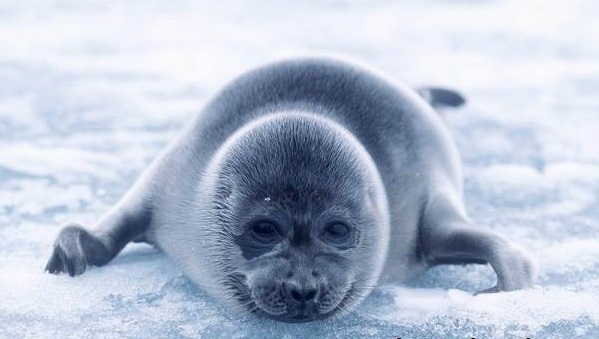 In the photo baby Baikal seal

Nutrition of the Baikal seal

The favorite food of the seals are the heads and Baikal gobies. For the year, this animal can eat more than a ton of such food. Rarely can omul be caught in their diet. This fish makes up 1-2% of the daily food of an animal.

There are baseless rumors that seals kill entire populations of the Baikal omul. In fact, it is not. He comes across a seal in food, but extremely rarely.

Reproduction and life expectancy of the Baikal seal

The end of the winter period is associated with the child-bearing process in the Baikal seal. Their puberty occurs at the age of four. The pregnancy of the female lasts 11 months. She crawls out on the ice in order to give birth to babies. It was during this period that the seals were most at risk from hunters and poachers. 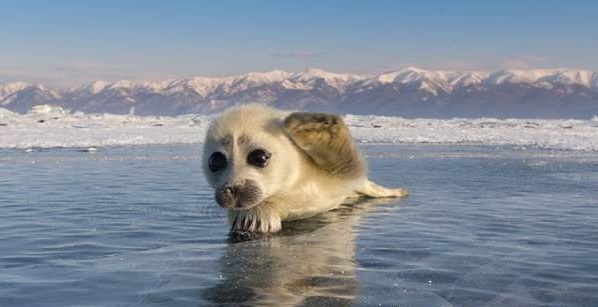 Baikal seal babies are born white, which is why they are often called “whitecoats”

In order to somehow protect themselves from these potential enemies and from the brutal spring weather conditions, seals build special lairs. This dwelling is connected to water so that the female at any moment can protect herself and protect her offspring from possible danger.

Somewhere in the middle of March, a baby of the Baikal seal is born. Most often he has one female, rarely two, and even less often three. The weight of a small about 4 kg. About 3-4 months baby eats mother’s milk.

He is dressed in a beautiful snow-white fur coat, thanks to which they are perfectly camouflaged in snowdrifts. Some time passes and after molting the babies acquire their natural gray shade of fur with silver, which is characteristic of their appearance. Fathers take no part in their upbringing. 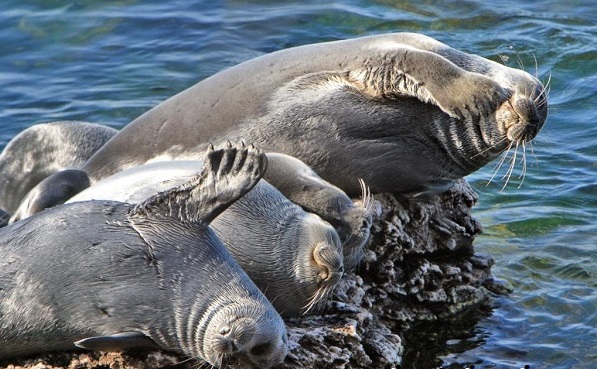 Growth seals lasts a very long time. They grow up to 20 years. It happens that some individuals, not growing to their normal size, die. After all, the average life expectancy of the Baikal seal is about 8-9 years.

Although scientists have noticed that this animal can live for a long time — up to 60 years. But for many reasons, and in view of some external factors, there are very few of these centenarians among the seals, one can say a few.

More than half of all these animals are seals of the younger generation at the age of 5 years. The age of the seals can easily be determined by their canines and claws.