This amazing funny lizard was called a basilisk. She has nothing to do with the mythical monster. On the contrary, the basilisk is a shy and cautious reptile.

Just the head of a lizard is crowned with a crest resembling a crown. Hence the name «Tsarek» (basilisk). The most intriguing and interesting for us is the basilisk’s amazing ability to run on water 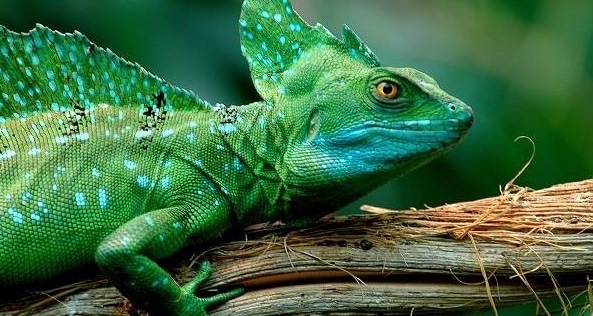 True, only 300-400 meters. Only young individuals possess this ability (weighing no more than 50 grams). But this spectacle is impressive. Conducted a study in order to understand how the lizard manages such a trick. It turned out that she succeeds at the expense of speed, the structure of the legs, tail and not a lot of weight.

There are four varieties of basilisks: crested, striped, common, and helm-bearing. If earlier they were ranked as the family of iguanas, now they have been divided into a separate category (the basilisk family). In general, species differ in habitat, color and size. 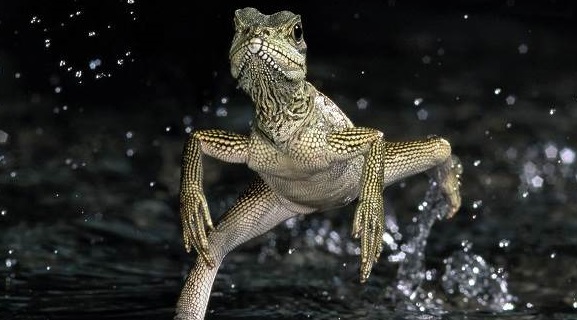 Thanks to its light weight and webbed feet, the basilisk can run on water

Anatomy of a lizard, a bright manifestation of adaptation to the natural habitat. Body color from green to brownish tones, this is a natural camouflage. It allows you to hide and remain unobtrusive to enemies in the tropical forests of Central America.

In young individuals there are white spots or oblong stripes that disappear with time. Starting from the head, along the entire length of the thickened part of the body, there is a wavelike crest. In males, it is more pronounced. The hind legs are longer and more powerful than the hind legs. At the end of sharp tenacious claws.

Going over the hind legs at a speed of a fraction of a second, the basilisk runs through the water at a high speed (one and a half meters per second). It is this acceleration that contributes to the formation of an air cushion, which keeps it on the surface.

In addition, the basilisk is a good swimmer, can stay in the water for up to an hour. Making his run along the watery surface on the hind legs, the lizard balances with a long tail. If the whole body can reach 80 cm, then the tail is twice as long as the body.

Interesting fact, Basilisk is one of the few reptiles capable of moving on its hind legs (bipedalism). Sharp claws allow her to climb trees perfectly. This is a brisk, fast and nimble creature running over land at a speed of more than 10 km / hour.

Omnivorous, another characteristic feature of this lizard. The food is insects, berries, plants, small rodents and smaller lizards, including their own young. The lack of seasonality in tropical forests, allows you to bring offspring throughout the year, up to four times. Basilisk lives on average ten years.

In full, to say the least, indifference to the offspring, these lizards live in polygamous families. One male and several females. In this case, the male will not tolerate the presence of a competitor, and will fight for his little harem and territory.

Lizards are awake during the day, at night resting. It is at night that they face the greatest danger in the rainforest. Large snakes, birds of prey and mammals attack the lizard most often at night.

But there is a more formidable enemy, man. Due to the merciless deforestation in Costa Rica, Guiana and other regions of America, the existence of lizards is under threat. The second reason, which can significantly reduce the population, is the fashion for exotic animals. The most popular species among poachers are helmet basilisks. 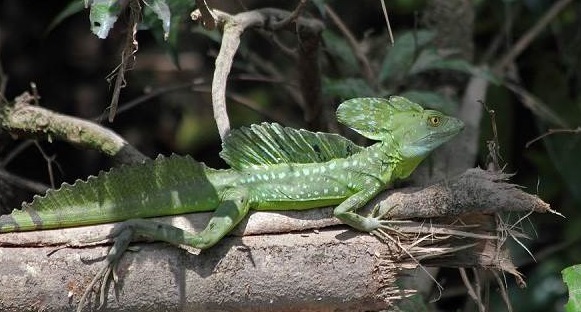 They are ruthlessly caught and transported in unsuitable conditions. These lizards are quite delicate creatures, so only a tenth of them survive. They do not tolerate stressful situations. But it is possible to breed them in captivity.

he most popular exotic reptiles for the house are Iguanas and Basilisks. They learned how to grow at home. Wild animals do not survive well in an unnatural environment, in contrast to those that were brought out in an incubator.

It is characteristic that the home Basilisks slightly changed color. He became not bright green, but bluish. It is better to keep a basilisk lizard in pairs, because it can be mishandred without the opposite sex. 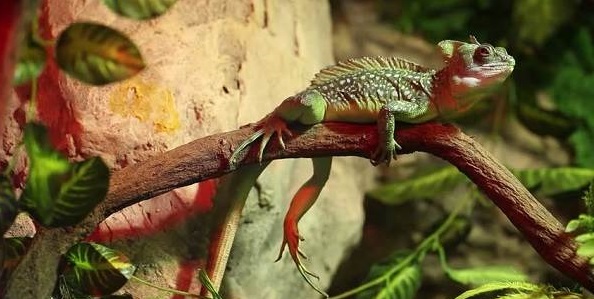 For each basilisk you need a terrarium of up to 200 liters. In addition, a pool is required. It is necessary to create conditions as close as possible to the natural. That is, the bottom of the terrarium should be sandy or with small pebbles.

In the arrangement of the territory of residence should be present snags, moss, plants. It is very important for reptiles temperature (25-35 degrees) and light conditions (up to 14 hours). To do this, install the lamp, heating and daylight.

The diet should be balanced. The basis of plant food: wheat germ, carrots, apples, bananas, fruits. The part should consist of insects. It is advisable to periodically feed small rodents or lizards. 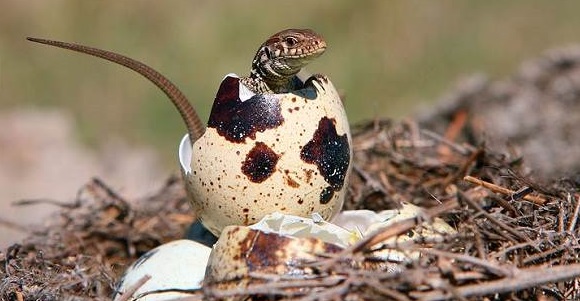 For laying arrange nest with wet moss and sandy bottom. After the female lays eggs, they are taken and grown in an incubator (up to 30 days). Nature pleases us with a variety of forms of the fauna, one of its masterpieces is the basilisk. For the ability to slide on the water surface, it is also called the lizard of Jesus Christ.

Roundhead lizard. Lifestyle and habitat of the roundhead