Bear sponge. Lifestyle and habitat of the sponger

Their fat linds are used as a cure for rheumatism. Bile of animals also goes to fight joint diseases, and also, it counteracts the ailments of the biliary system. It includes the liver, the duct network and the gallbladder. 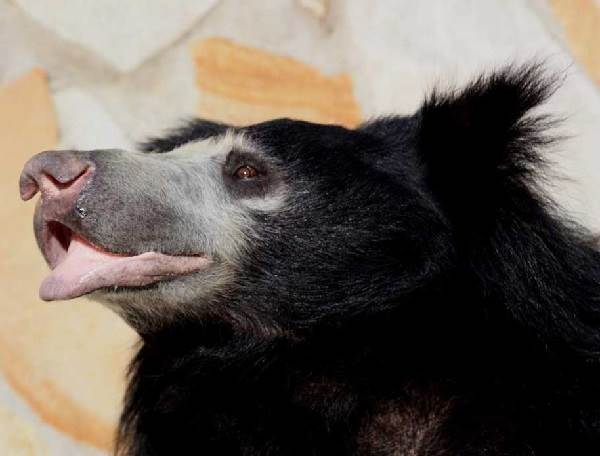 Farmers destroy animals in order to save corn crops and fields with sugar cane. Hunters eat meat of animals, make their skins. All this is about sponges. This is the name of the southern bears. They, as is clear from the above, are few in number.

Description and features of the bear

Externally, the sponge looks more like an anteater or a sloth than a bear. The habits of the beast are also exotic. Gubach, for example, bears his offspring on his back. However, genetically the animal is related to the toed. From the behavioral habits of the hero of the article, rage is related to them. In relation to man, about a thousand attacks were recorded. Fifty cases ended in the death of people.

The bear received the name thanks to the structure of the muzzle. It is narrow and elongated. The lips of the animal are slightly loose, as if protruding. The beast’s nose is mobile. All this — the devices developed for the extraction of honey and fruit nectars. In order to reach them, the bear grew a long tongue. 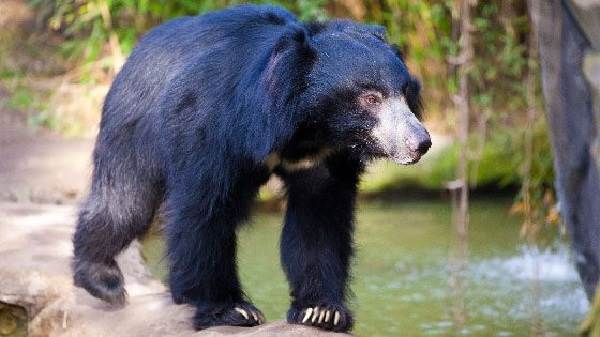 This is one of the similarities with the anteater. Teeth at the sponge are small. There are no two upper incisors. This simplifies the way the tongue is pushed into the honeycomb, date fruits. Newborn sponges have incisors, but drop out with age.

The length of the lips reaches 180 centimeters. Saki is often stretched only by 1.5 meters. The height of the female specimens is 60-75 centimeters. Males at the withers reach 90th. Small scabs weigh 50 kilograms. The maximum weight is 130 kilos.

Bear sponge in the photo is distinguished not only by the structure of the muzzle, but also by long paws with large feet, large ears, a white V-shaped mark on the chest and a light stripe on the nose. Still the hero of the article is the longest-haired among the bears.

The description of the bear is not without a review of the development of his senses. Of them, only smell is at the height. The hearing and sight of the animal are bad to such an extent that the beast does not always notice the approaching person. In this case, the bear senses it. This is what stirs up the alarm. Thus, zoologists explain the prevalence of attacks by people with sponges. 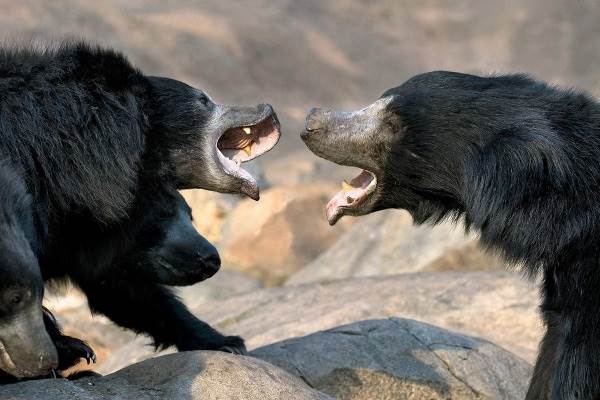 You can meet with a sponge in South Asia. This is the native region of white-bearded bears. Outside Asia, animals are found only in zoos. In Asia, the highest density of bear population is recorded in India. Animals gravitate to mountainous regions, choosing ridges of the Himalayas. Hence the alternative title of the hero of the article is the Himalayan bear.

Gubach in the mountains finds cropland, destroying human crops. Therefore, and because of cases of aggression of bears, they are shot. The last decade, this is outlawed, since the sponge is listed in the International Red Book. There are only 20 thousand individuals of Himalayan bears left. They are often rescued by nightlife. In the afternoon it’s difficult to meet the hero of the article. 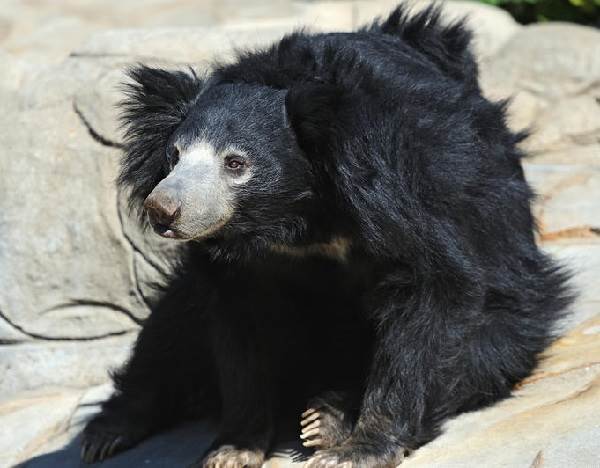 During the daytime, the sponges are showered in secluded places. They are all in the tropics or subtropics. Some females with cubs decide to take a day’s way of life. Going to look for food in the light, females protect offspring from night predators. When the cubs grow up, the family returns to the night mode of life.

Choosing for life elevations, the goosebee does not seek to conquer Mount Everest. Comfortable for life bears height is limited to 3 thousand meters above sea level. Above and in the lowlands sponges are not found.

In addition to the Himalayas region, the gubacs live in Sri Lanka. They lack a bright apron. Therefore, it is customary to select island bears as a separate subspecies. Individuals in Sri Lanka are less Himalayan and more rarer. 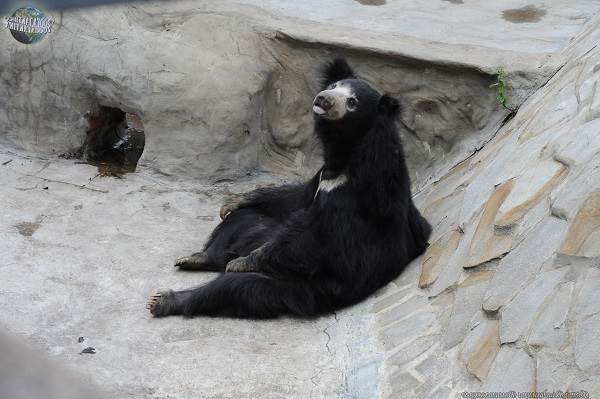 In a thick coat does not make sense, because the living conditions of the island species are warmer, softer. Only scientific works are written about island sponges. The Himalayan bear is also noted in fiction. It is enough to recall the story of Mowgli, written by Rudyard Kipling.

Initially, many scientists ranked the gubachev in the family of anteaters. This is due to the structure of muzzle, tongue and food preferences. Most of all, Himalayan bears love ants and termites.

From the houses, the sponges get prey, using not only the tongue, but also the claws. They are long and sharp, like knives cutting anthills. So the predator gets to the central «arteries» of the dwelling of the Hymenoptera. 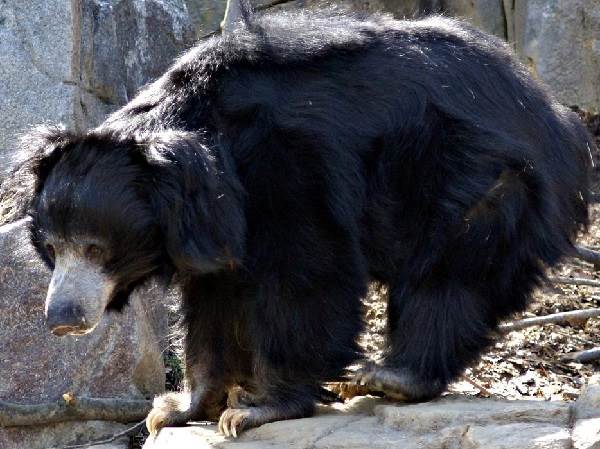 Cutting an anthill, the sponge blows dust out of its moves and lick the prey. For a sitting, a bear is able to eat one large colony. Protein menu Himalayan toadies are varied with honey, berries and fruits. In Sri Lanka, for example, bears chose date palms, they hunt for their fruits.

When you know interesting facts about the bear, you will know that he is capable of even sugarcane, plant roots. However, these dishes are «stored» for a rainy day. If there is other food, the beast will prefer it. With the hollows of the same sponges, not only the roots absorb, but also destroy the nests of birds, attack other animals.

The life of the sponge is limited to 20-40 years. It’s in the wild. In captivity, animals live 5-10 years longer, but are difficult to breed. In nature, Himalayan bears bring offspring once in 3-4 winters. Begin the cubs in April. For the delivery of the she-bears retire in secluded places. Usually these are caves and lairs covered with stones. 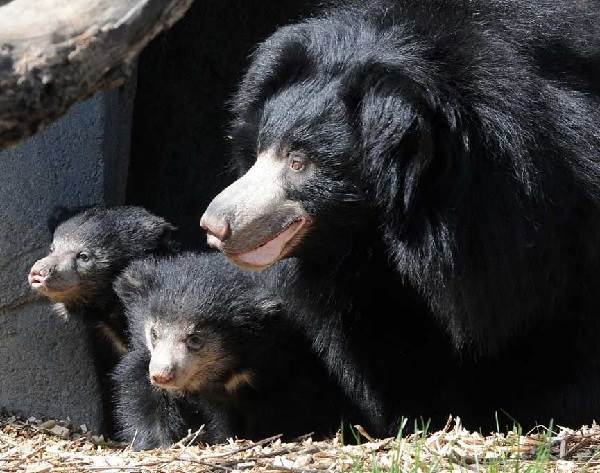 Simultaneously, the female sponge brings from 1 to 3 cubs. Often they are 2. Beasts are born completely blind and deaf. The first 2 months, the mother takes care of the offspring in the den, afterwards, begins to bear on her back to the outside world. By this time, the cubs open their eyes, and the hearing improves.

With the mother cubs remain until puberty. It occurs on the 3rd year of life. Then the female prepares for the next birth under favorable environmental conditions, or spends a year on recovery, weight gain. 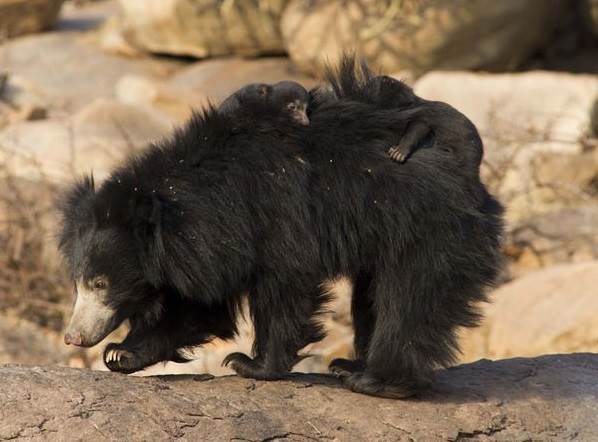 Goblets are born 400 grams. This gives an idea of ​​the vulnerability of babies. On breastfeeding, they remain up to 1.5-2 years, although they begin to diversify the diet in 3-4 months. This is the time of active games.

Caution teddy bears, is still not getting. Whether the leopard or the Bengal tiger is approaching, the bear is watching. In addition to large cats, no one dares to hunt in Himalayan clumbers.