In the northern seas, an unusual mammal called beluga can be found . This animal is the middle link between a dolphin and a whale. External forms have a strong resemblance to a dolphin, but in size it resembles a whale. In everyday life it is called the « polar dolphin «. 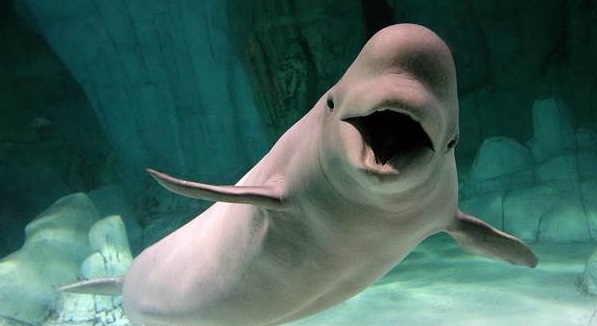 Features and habitat of the white whale

Belukha (from the Latin. Delphinapterus leucas) is a large mammal, family Narwhalov, subspecies — toothed whales. The dolphin is considered to be due to its habitat — the seas of the Northern Ocean and the polar bodies of water.

Circumpolar distribution (50-80 degrees north latitude). Belukha lives in such seas: Beringovo, White, Okhotsk, sometimes it enters the Baltic Sea. During floods can reach the rivers: Ob, Yenisei, Lena. According to some reports, there is a separate whale whale population within the St. Lawrence River.

It has a large size: the male reaches a length of 6 meters, the female — up to 5 meters. Body weight ranges from 1.5 to 2 tons. The distinctive feature of the beluga dolphin is the head, which does not confuse him with anyone else.

He can also turn his head, which is not typical for whales . The conjoined cervical vertebrae contribute to this. Fins on the chest oval, small size. The white whale, unlike dolphins, has no fin on its back, because it is also called the “wingless dolphin”.

The color of the dolphin beluga differs and depends on the age-old affiliation. Only born cubs have a blue and dark blue shade. Years reached individuals fade, acquire a gray or light gray color. Sometimes the color is transformed into a gently bluish color. Representatives of the population aged 3-5 years have a pure white color.

Character and lifestyle of the white whale

Beluks tend to gather in flocks. Groups are arranged approximately like this: a female with cubs or several dozen males. Lifestyle is systematic seasonal migrations. 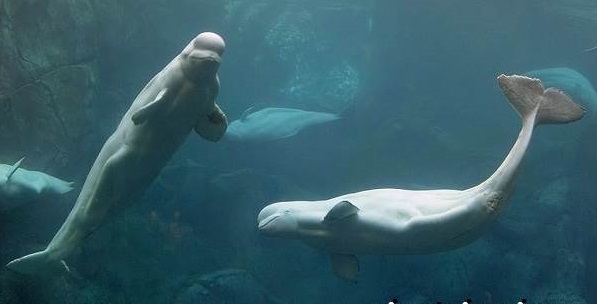 In winter, they try to keep to the edges of icy areas. Often, during wintering, a flock of beluga whales thick ice, and for many it ends tragically. Often, groups migrate to the south, when the covers have a very thick edge of icing.

In the spring, flocks gradually move to shallow water, to estuaries, bays, fjords. This behavior is due to the annual moult. They peel off the upper dead layer by rubbing against pebbles or hard banks.

Migration is always carried out on the same route. The fact is that the white whale dolphin remembers the place of its birth and seeks to return there every year. Belukha can be considered a full-fledged social being in a group. Because they have actively developed communication: with the help of sounds, body language and facial expressions. 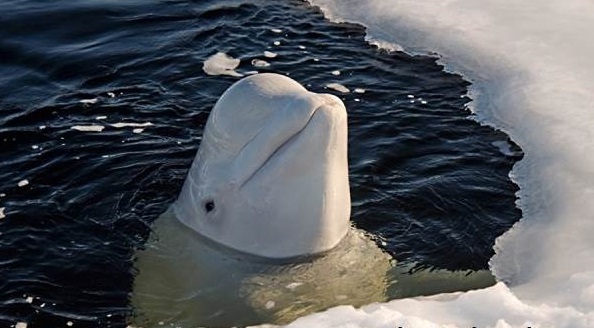 Scientists counted up to 50 different sounds that this animal can make. Sailors call whale beluga «canary sea expanses.» The nature of the animal is good-natured, this explains its main similarity with the dolphin. Perfectly gives in to training, it is often possible to see fascinating circus performances with their participation. There are cases of rescuing a person by a polar dolphin .

Belukha mammal eats mainly fish. Eating is not done by taking the carcass, but by sucking with water. An adult individual, on average, eats up to 15 kg of fish per day.

It feeds less on crustaceans and plankton. She is very fond of salmon representatives, ready to migrate after them through many thousands of kilometers. Often swims because of this in the deep rivers and huge bays. 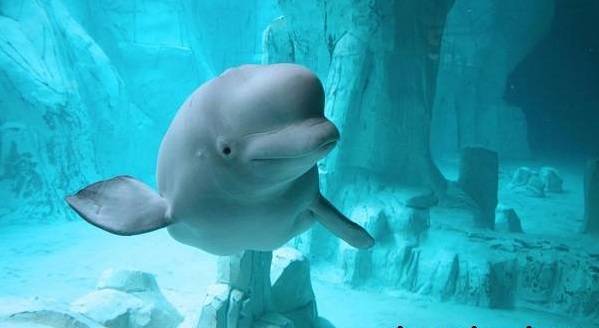 The period of love joys in belugas comes in the spring-summer range. To do this, they choose a calmer coast. Here they mate and the offspring appears. Often males adequately fight for the attention of the female. Sexual maturity in males occurs at the age of 7-9 years, and in females — at 4-7 years.

A polar dolphin female of a white whale bears a baby for 14 months. The addition is carried out once every two to three years. Female gives birth in warm water, closer to the shore.

Feeds baby milk for 12-24 months. The cub at birth reaches a length of about 1.5 meters. Twins are rare. To give birth to beluga whales cease on the second ten of life. The average age that a mammal reaches is a range from 30 to 40 years. The main advantage of the white whale is incredible agility and dodging. 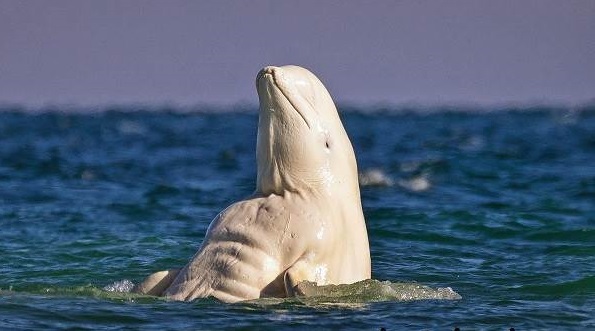 The normal speed of an adult individual reaches 3-9 km / h, when frightened — up to 22 km / h. The ability to remain under water without air for about 15 minutes. Every fifteen minutes masterly emerge in order to breathe.

The beluga whites have low eyesight, because they receive information about nearby objects using the echo location. They publish click-shaped ultrasounds (there are special air sacs). A separate part of the brain reads all the data on nearby objects. This involves an acoustic lens on the forehead.

The most dangerous time for a polar dolphin is winter. Besides the fact that flocks can get into ice captivity, they have natural enemies. The most dangerous is the killer whale . It is difficult to hide from her and often the persecution ends pitifully. Therefore, belugas try not to swim far into the ocean. 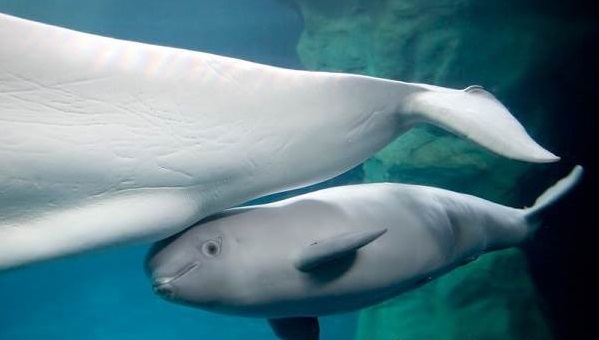 Another dangerous predator who likes to eat a white whale is a polar bear . During the wintering of mammals, he watches them near the water’s edge and with a strong blow of the clawed paw immobilizes the animal.

Recently, another bad factor has appeared that reduces the population of these animals — ecological. A large amount of toxic waste from the enterprise is discharged into the ocean waters, which causes flocks to migrate to very distant cold places. They often become a trap for a large number of individuals, the beluga whale in the sea simply freezes.

The whale whale is a favorite of spectators in huge aquariums. The animal willingly makes contact, poses and allows itself to be photographed. He feels great in captivity and is an excellent neighbor for other exotic inhabitants of the aquarium. 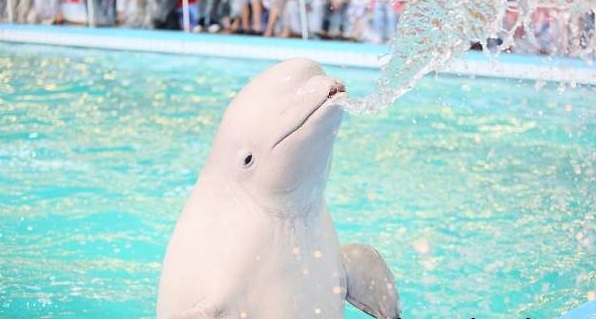 You can often see belugas performing in the circus, they do an excellent job with the tasks, they are easy to train. In the photo , the white whales are almost white, like angels descending into the water.