Black cuttlefish — an amazing inhabitant of the ocean depths, disturbing the imagination of people for many centuries. For example, the legendary image of a sea devil or a sea monk, about which the sailors composed terrible tales and which frightened the young men-recruits — these are only ten-finger black cuttlefish.

Very interesting and detailed about its role and place in marine folklore is described in the study by A. Lehmann «Encyclopedia of superstition and magic.»

However, no matter how mystical properties and qualities would not give this queen of the underwater world the human imagination, the cuttlefish is an ordinary sea animal that people do not forget to use for food and, of course, to study and explore.

Peculiarities and habitat of black cuttlefish

Among oceanologists and simply photographers of underwater expanses and their tenants, it is considered a very great success to make a photo of a cuttlefish at the moment when it swallows prey.

It is believed that for the first time this sea animal was described in 1550, the researcher Konrad Gesner in his work “The History of Animals”, and the effigy of that same cuttlefish is still kept in the Copenhagen Museum of Natural History.

There is also evidence of the presence of such marine inhabitants in other seas, including low-temperature waters. It is possible that official science will soon reconsider and expand the zone of their habitat.

The size of cuttlefish, as far as science can assert, does not depend on their species, and ranges from 2–2.5 cm to 50–70 cm. To date, 30 species of these beautiful creatures are known, but this division is mainly based on that coloring which is inherent in an animal most of the time.

Coloring cuttlefish change more interesting than chameleons. Lying on the seabed, the animal completely merges with it, changing not only its color, but also acquiring additional specks, spots and stripes that completely imitate the surrounding landscape.

Tentacles, which many consider to be their legs, in fact, surround a mouth that looks like the beak of a large owl or parrot, from the glands above which cuttlefish release ink at the slightest danger.

So, the fact that they emit gases with ink is also a myth. The basis of these errors is the stereotype of human perception. From the point of view of our brain, it is natural to move our head forward, as almost all animals and birds do. But the marine cuttlefish moves backwards, similar to cancer.

Returning to the fact that sepia (ink) cuttlefish releases at the time of danger, it is worth noting that the release of this cloud gives it not only a disguise, but also immediately gives acceleration, as if pushing the animal.

The anatomical features of these mollusks include the “cuttlefish bone”, which is actively used in the jewelry industry, high cooking, medicine, and art crafts.

Bone is nothing else than the inner skeleton, or shells cuttlefish, consisting of aragonite, in the form of thin plates, connected by a set of flexible jumpers. Part of the shell is filled with gas, which allows the mollusk to adjust its own position and buoyancy.

Experimentally, scientists have determined that the shell breaks when submerged to a depth of 700 to 800 meters, and begins to deform at a depth of 200 meters.

In addition to the skeleton, it is worth noting that this sea animal has as many as three working hearts, and its blood is colored blue or greenish blue by hemocyanin, just as human blood is colored red by hemoglobin.

The nature and lifestyle of black cuttlefish

As for habits, character and directly the way of life of cuttlefish, they are actively studied. Unfortunately, science is far behind fishing trailers, which not so long ago actively practiced industrial capture of these mollusks.

As a result of such activities, more than 17 of the 30 known species were on the verge of extinction, animals near the coast of Australia, including the black ten-finger, are mostly endangered. 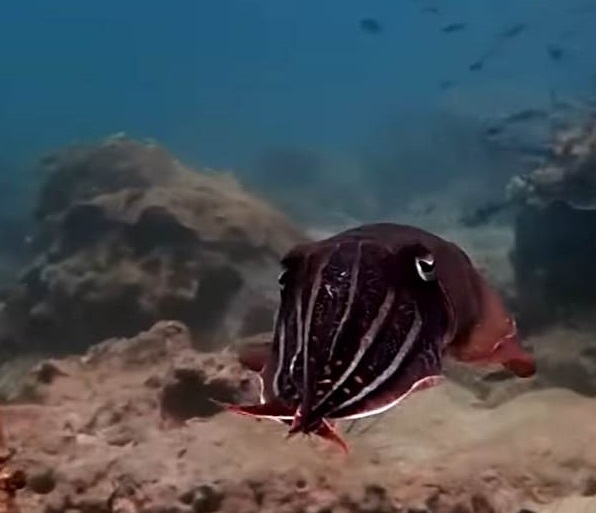 On the photo is black cuttlefish

From observations in aquariums, it is known that this mollusk is extremely clever and has an excellent memory. If someone “offended” the cuttlefish, even after years when there is an opportunity, it ruthlessly takes revenge, and it is precisely the offender who is unmistakable, without hurting other members of his species.

The ratio of the size of the brain in relation to the body of this mollusk is much larger than that of fish and squid, many scientists believe that the mental abilities of cuttlefish are comparable to marine mammals.

According to the results of oceanarium observations and research conducted at the Institute of Georgia, published in 2010, the social lifestyle of cuttlefish and squid is completely different from each other, although it was previously considered the opposite.

Although mollusks lead a solitary life, they have “families” and organized communities that come together only during the “mating season”, which is most likely dictated by the need for security, since the partnership in love games of these mollusks is determined once and for all life .

Now it has become very fashionable to breed miniature species of these mollusks in domestic aquariums. However, before you buy even the prettiest cuttlefish, you need to know what it eats. These animals are predators. They hunt for anything they can catch and swallow — fish, crustaceans and other animals.

Therefore, going to the store where you can buy cuttlefish in the home aquarium. You need to be mentally prepared that a moment will come when there will be no fish left in this aquarium, just like snails. 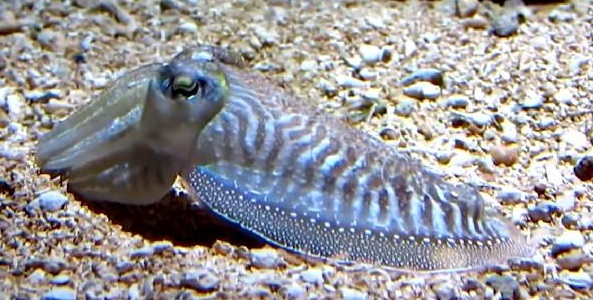 To eat these mollusks love, and according to observations, in the conditions of the aquarium, the cuttlefish grow and gain weight all their lives. The weight of the oldest «resident» of the aquarium at the Institute of Georgia according to 2010 data exceeded 20 kg. However, while this feature is under study, it is officially considered a hypothesis.

Living alone, approximately once every year and a half, the cuttlefish gather in large flocks and occupy the site at a shallow depth, at which they can move in circles until the elderly choose the most suitable.

On the first day, something like a settling of a new place takes place, exploring the surroundings and, oddly enough, changing colors. Shellfish seem to dress up. For example, black cuttlefish gets red outflow and longitudinal stripes.

However, it can «dress» in white spots. From above the city of mollusks at this time looks like a glade. Filled with exotic flowers of the most impossible, surreal shades.

On the second day, already established couples find each other, and young people begin to actively meet and care for each other. For a long time it was believed that the cuttlefish multiply once in their lives, but now it has already been proven that this is not the case.

But couples they really add up for life. Moreover, the male is very affectionate towards the female, he constantly touches her, hugs her, while both flare up from the inside with pink light. Amazingly romantic and beautiful picture.

Direct reproduction is carried out by laying eggs. The female lays them hanging, like bunches of grapes, the similarity to the berries gives the blue-black color of the clutch, during which the fertilization takes place.

They are born, more accurately hatch, the babies are completely independent, with completely filled ink cameras and possessing all the instincts necessary for survival.

Until recently, it was believed that adults die after mating, or, as scientists sometimes say, spawning. The first doubts in this scientific postulate were made by workers of the network of sea restaurants, after a generation of small mollusks appeared in their aquariums, and their parents did not intend to die at all. Aquariums were decorative, so the animals for cooking pasta with ink cuttlefish from them are not caught.

Later, these same observations were recorded in the aquarium in Georgia. Therefore, at the present time, the lifetimes of mollusks and some features of their reproduction are an open, debatable question in the scientific world that does not have unambiguous and accurate answers.

Most recently, Russian lovers of the aquarium worlds were able to completely legally breed these mollusks, which was impossible until 2012. As a rule, potential inhabitants of the aquarium are from 5 to 10 cm in length and are not impressive at first glance, reminding their color of stale boiled octopus. 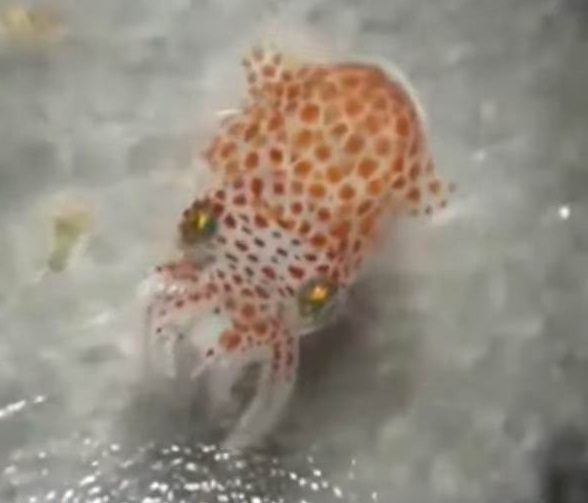 However, do not pay attention to it, you need to remember that the clam changes color. And being in a cage for these sea beauties is a real test and a lot of stress. Prices cuttlefish are different, on average it is from 2,600 to 7,000 thousand rubles. Buying a pair is not worth it, moreover, if there is sympathy between two sold mollusks.

In general, even though the content of the imitation of the sea climate is rather troublesome, it justifies itself, giving every day the opportunity to admire this strange sea animal, which is so different from everything that people are accustomed to.