How rich, and has not explored the underwater realm. Its unforgettable, elegant water spaces. With millions of different algae growing as fabulous seaside Botanical gardens. Such a similarity on land never see. An incredible combination of sizes, colors, as if Neptune himself is taking care of them.

And the fish, shellfish such outlandish types and sizes, from microscopic organisms, to giant whales. Some of them have looks that even impossible to describe.

It is only necessary to see. So, lately, it has become very popular a sport as diving. Now, perhaps, not one resort is complete without it. These will not forget the experience, the feeling of reunion with marine life. 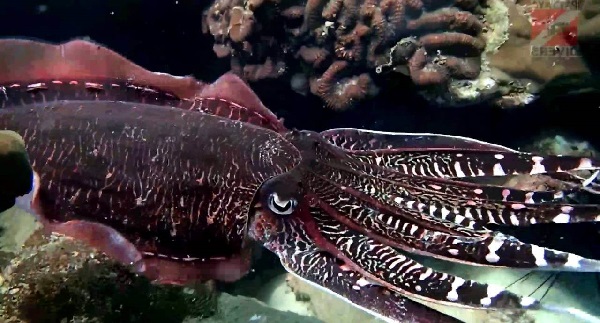 To some extent, with notes of danger. But it’s all so mesmerizing. At home you can spend hours gazing at aquarium fish. And here awake, alive, some even touch.

Medusa, at eye level, is a company in scuba diving. Fish clowns flock perched accompany guests. Running is not known to you toli toli from you crabs. Shoals of fry of the mirror, just churning with movement.

But now I want to tell about the black cuttlefish. About her become legend. According to legend, someone saw the beast of the sea, resembling the shape of a monk. Which, from the sea swam to shore, lured and dragged into the water the unfortunate victim.

That description came black cuttlefish, lying on the bottom, hands folded, waiting for food. The wings of her mantle evolved as the robe of a priest. Well, human imagination in fear, to finish the rest of the picture.

Also, she made, in the truest sense of the word, a hand to science and culture. After many decades, it was her ink wrote the manuscript. Artists used paint, with the use of cuttlefish ink. As a consequence, the paint is given a personal name – Sepia, named after the mollusc.

Once the ink is widely used in cooking. They give color to dishes. For example, add in pasta with cuttlefish ink, or paint over the sauces. Making the noodles, add them to the dough for a specific color. 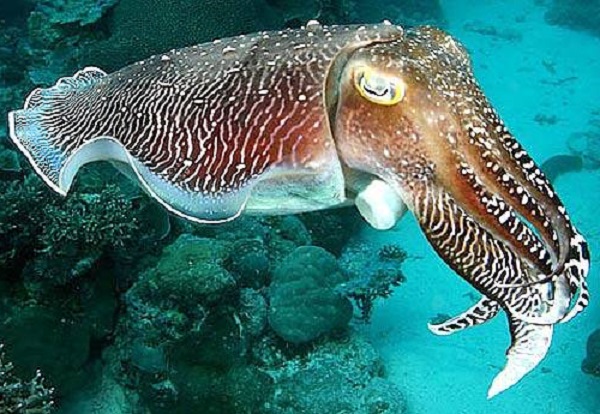 Copper and selenium with the iodine absorbed in the body. Manganese and magnesium, omega fatty acids. But we must not forget that there are contraindications such products. It is people who are allergic to all seafood.

Black cuttlefish, she is a Sepia – mollusk of the family of cephalopods. During its existence, as it was called – and sea chameleon, and the black monk, and sea-devil.

Head of cuttlefish, tightly fused with the body. She has the body oval, sides fringed with fins, like the flounces on the skirt, and a forked tail. Move in Sepia the same backwards, like a crawfish.

Cuttlefish, unlike squid and other shellfish are considered the most intelligent, comparing the brain size with body size. Scientists oceanographers believe that the mental abilities are in no way inferior thinking marine mammals.

And the winner of a perfect memory. After all, if, in early childhood, it will hurt some creature, the black cuttlefish will then prosecute the offender for the rest of his life. She has ten hands, tentacles, covered in two rows, four pairs, suckers. Two of them are for hunting, so more than others, up to thirty inches in length.

In repose grasping hands hidden in special pockets bags that are on the head, below the eye level. And in the case of hunting, the cuttlefish produces them sharply, grabs the tentacles, suction cups absorbed in future meals.

The tentacles have taste buds, therefore, the shellfish may have to try the food, not eating it. And between the hands is a huge nose, like the beak with which the animal crushes its prey, be it a crab, a cancer or a fish skull. 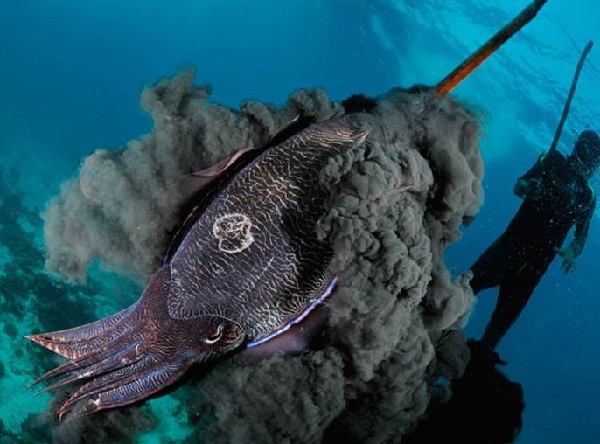 And it releases an ink cloud. The ink is in a special location, is divided into two sections, the bag. In one part there is a prepared protective compound, in the second it is produced. The elaboration process takes no more than half an hour. So, sea chameleon always armed to the teeth.

The sighted inhabitant of the marine fauna is the black cuttlefish. Her huge all seeing eye, increasing the scale of the view, located on both sides of the body. The pupils in the eyes are like slits.

The skin has cells sensitive to light, thanks to the cuttlefish changes its color better than a chameleon. The change of «apparel» in seconds of time.

After all, it is not easy change colours, and even covered with polka dots, stripes, circles, depending on the place where was and where is masked. Color range is so varied and unusual that no other living creature, not able to repeat this.

And yet it changes the shape of the body itself, entirely merging with the environment. She can pretend to be a real sea pebble, and can become a weed when traps lint or hiding from enemies.

A distinctive feature of the cuttlefish – the presence of armor under the outer covering, consisting of skin and muscles. And thanks to him, protected all the internal organs. Cuttlebone effectively used in medicine, retail and jewellery industry.

The internal organs of a cuttlefish is also unusual. She wears not one, not two, but three hearts. Two of them pumped blood to the Gill plates. And third, there is a circulation to all other organs. The blood of a cuttlefish is not scarlet. It is blue with moss green shade.

Photos of cuttlefish show that in relation with other cephalopods, it is much smaller. Some of them can be less than three inches. Others grow up to one meter. The largest of cuttlefish – Sepia sirakorola. They grow to half a meter. And weigh more than eight pounds. Well, the average size of remaining individuals in the range of thirty inches. 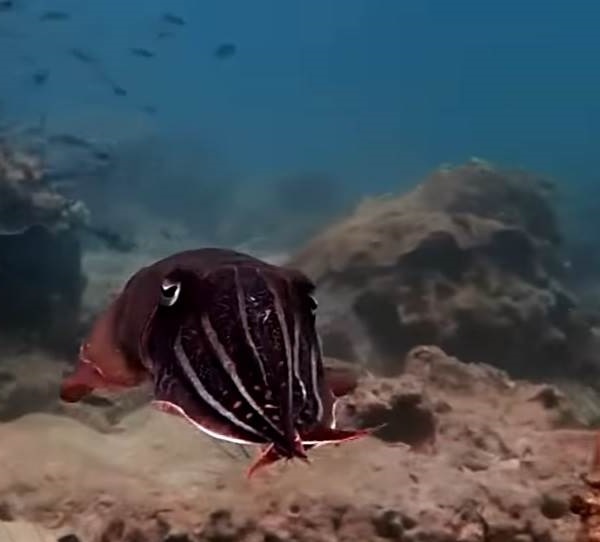 Clams live in warm seas, near the coasts of Africa and Asia, in the waters of the Atlantic ocean and the Mediterranean sea. Large groups are collected only during the mating period. The rest of the days and months spend in solitude. Very rare to find small flocks of them.

The character and lifestyle of black cuttlefish

Leading a solitary lifestyle during marriage period, these molluscs, selecting one partner is no longer cheating on him ever. They have even formed the so called family in the distance. Meet once, for all time of its existence, to create offspring, and then parted again.

Who decided the house to get a strange animal, prepare yourself for the fact that living previously in aquarium fish, with the arrival of the cuttlefish, will quickly disappear. New neighbors just eat them. Well, the animals themselves, at first in fright at the sight of the owner, will permanently stain the water.

In a panic, releasing a bag with ink. Then, it’s all pretty quick stop, carefully examining their breadwinner, the cuttlefish will get used to it and will not worry in vain.

Live of cuttlefish in shallow waters in the coastal zone. Even though they have a durable inner shell, at a depth of one hundred and fifty meters, cuttlebone starts to deform. And from a half-kilometer deep, completely destroyed. 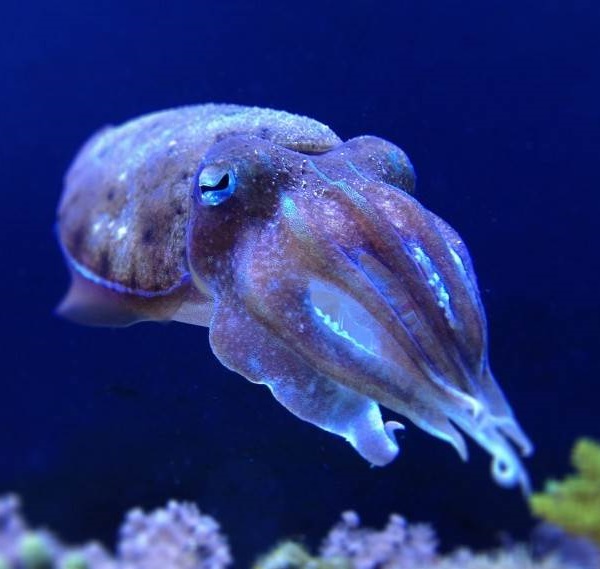 There, near the shore of Sepia and hunting. Their prey, lure, linger on the sea rocks, pretending to be vegetation. It flashes different colors like a Christmas tree. As it is, by nature, very cautious, at the sight of danger, lies tight to the bottom. And as much as possible, actively working the fins are assessing your body the sea ground.

Nevertheless, if the predator caught up to clam, cuttlefish ink produces sharply and tries as quickly as possible to sail away from the enemy. Basically being hunted by dolphins and sharks.

The sad fact is that black cuttlefish are in high demand on land. Therefore, the fishing vessel day and night hunting them. And half of the species are in critically endangered condition.

In the natural environment of the cuttlefish they eat shrimp, squid, small fish, worms and other crustaceans. And they hunt very interesting, always from the teshka. Swim yourself on the bottom, as if nothing had happened.

Then suddenly release a stream of water, shaking it in the sand, raising their own food. The food, which is of a smaller size, cuttlefish swallows it whole. With larger prey, she had trouble cutting up his beak.

Before you buy a cuttlefish in the home aquarium, you need to learn how to feed her. You can get at home additional capacity for breeding crustaceans, snails and shrimp. Because the cuttlefish is a predatory mollusk, and very voracious. Studies show that black cuttlefish whole life gaining weight. Therefore, happy to eat everything that moved.

Where to buy cuttlefish, in our time is not the problem. And in specialized stores already selling them, and the world wide web of the Internet too. Prices for these clams ranges from three to seven thousand.

The reproduction and lifespan of black cuttlefish

The marriage game the cuttlefish, occur about once in six months. Gathering in flocks, and going on a bit depth, a group of individuals begins to explore this new land. They change their colors, giving the colors a solemn tone. If from afar you look at a cluster of clams, you would think that among the sea of ocean, flourished a small moving bed.

On the second day of Dating, couples become more active. Gentlemen caring for ladies, affectionately prinimaya them with their fins. Both sexes become pale pink colors. The male differs from the female, the hand-supalai. In males it is a different structure than females. Through which fertilization occurs after the female laying eggs.

It attaches to anything that gets in the way, be it a plant or a stone. The future of offspring, similar to the bunch of some exotic fruit, with a gray-blue color. The offspring appears completely independent and fully formed. In the structure of their Taurus I already have an ink pouch, and a hard shell in the middle.

Earlier it was believed that cuttlefish mate only once in life, and then die. Now its completely refute. The life expectancy of black cuttlefish is not long. They live from one to two years. Recent years, becoming more fashionable to make at home, exotic Pets, fish, birds, including cuttlefish. Watching them is funny, but not permanent, unfortunately.