The high content of black pigment in the skin, animal hair became the basis for the birth of the image of the sacred cat. The black panther on the photo impresses with a magical look, as if her being is connected with the secret worlds. Panthers call the whole genus of felines, whose habitat is interesting even without a touch of mysticism. 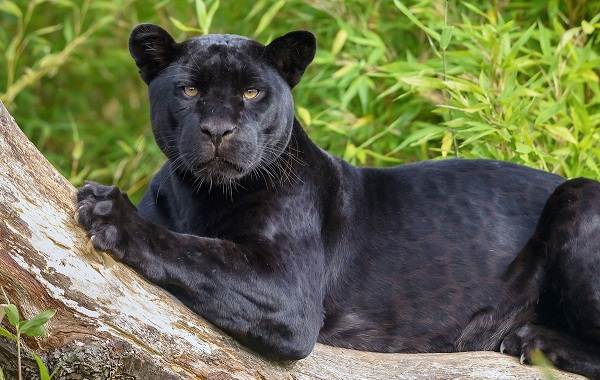 Large predators of the cat family with signs of melanism began to be called by the whims of man panthers. The history of the name goes back to Latin, Greek, Old Indian languages, meaning «tiger». Myths and facts about the life of the panther are thoroughly intertwined.

The genetic characteristic of animals is either a disorder or a form of protection in a harsh environment. Dark coloration is more often shown in predators, long in impenetrable forests, where sunlight almost does not fall. In dense thickets, the color of the night helps to survive.

The black panthers include the formidable representatives of predators:

In Malaysia, half of all leopards can be classified as panthers based on the corresponding black color of the animal. 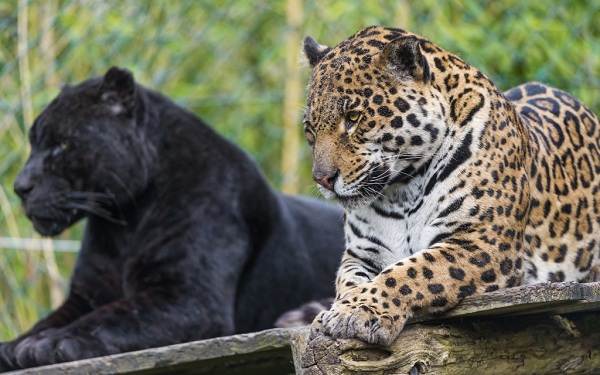 Black couples do not occur, although the gene mutation leading to melanism is inherent in even foxes, called black foxes. From the outset the color of the skins of animal melanists seems to be uniform, but near you can see the emerging spots on a dark background.

In addition to color, other individuals of the genus do not differ from their relatives in any other way. Crossing gives a multicolored offspring: chocolate, reddish, spotted, less often black. This is explained by the laws of genetics, according to which, a recessive black gene is often suppressed by others.

On numerous photos of black panthers you can often see

South American jaguars, who have the dominant form of an alternative gene;
African or Asian leopards with a recessive form of the gene.

It is interesting that the name «panther» is applied to other animals of the cat family with a rusty, even white skin. But all the same, the visiting card of the classical image is the Mephistophelian color. In the black range there are tides of blue, gray and purple. 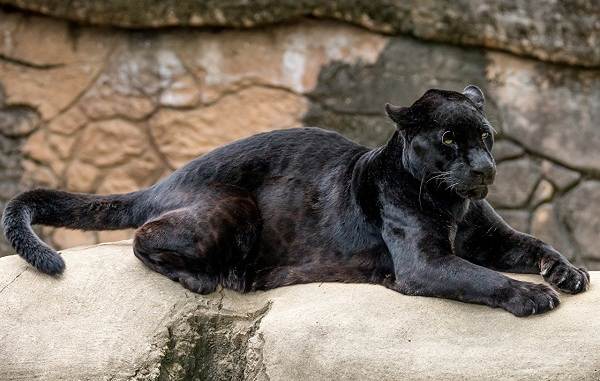 Black panther is a large animal. The body length is up to 2 meters, the height is about 70 cm, the mass is 50-60 kg. The extruded torso of the predator is flexible, smart, graceful. Strong paws, on the fingers are large claws, which the beast retracts like a domestic cat.

The tail can be equal to half the length of the trunk. Males are larger in size than females by about 25%.

The head of the animal is large, slightly elongated. Ears and eyes are small. The look of a real predator, piercing and cold. Powerful jaws, sharp teeth complete the image of a ruthless beast.

Many ancient peoples considered a black panther a totemic animal. Grace, majesty, strength, character’s self-depreciation always caused a special worship of a man to an elegant and ferocious animal. The speed of the traveling panther reaches 80 km / h, the height in the jump is up to 6 meters. 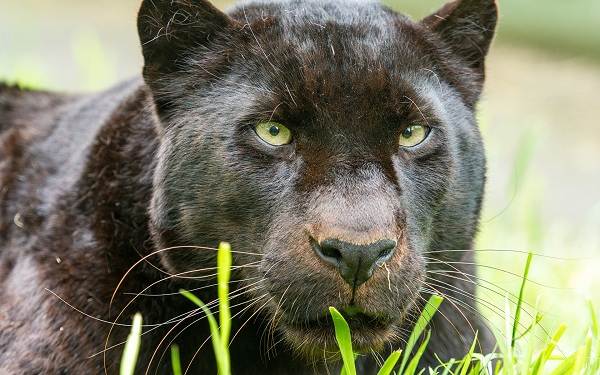 The panther in heraldry is portrayed as furious, with flame from her mouth, ears. In the description she is endowed with beautiful features, attributed to her a magic singing that carries away other animals, except the dragon. He runs away from the panther.

In reality, the panther has a special larynx, which makes it possible to make a terrible roar, chilling the soul in the dark.

Talk about the types of panther can be conditional, since the nature of the animal is based on the genetic mutation of four known species of the cat family: leopard (leopard), jaguar, lion and tiger.

Panther-leopards surpass lions and tigers with swiftness, dexterity. The ability to climb trees, rocks, excellent reaction, fearlessness make them super-crampons. The ancient Sumerians recognized the black panthers as goddesses of fertility and love. 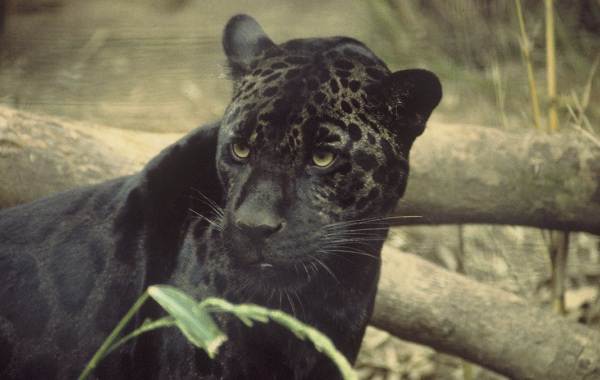 Panther-jaguars are also unique in their ability to survive in different environments. The Indians called them deities of darkness, and the roar of the animals was considered a rolling thunder.

Artificial breeding hybrids, ie, crossing the panther and other wild cats, led to the appearance of:

In a natural environment, hybrids are not found due to different natural ranges of tigers and lions. The birth of kittens of different related species is possible in the cramped conditions of zoos and circuses.

Ligers are born much more often than tigons. Hereditary features of the pope prevail in the guise of kittens. At the moment, ligers are the largest cats, whose growth reaches 4 meters, weight — more than 300 kg. Progeny from them is almost impossible to obtain. 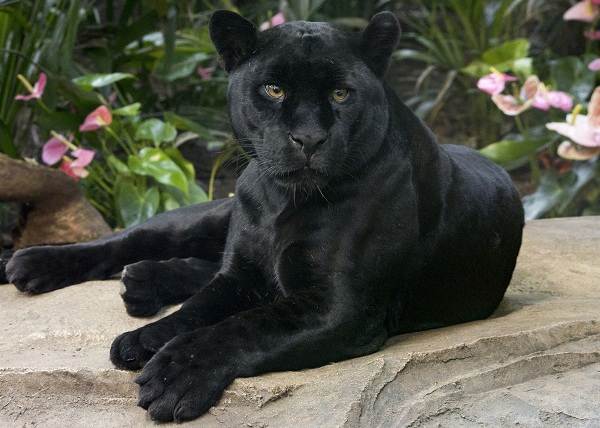 Tigons appear less often. After birth, babies are usually painful and weakened. The size of grown-up individuals is less than that of parents.

In reminding of the existence of a leopon and a pumapard, there were only stuffed animals, doomed to extinction. In the futility of experiments on crossing these predators, many researchers are convinced.

The geographical area of the panther is wide. Numerous populations are found in Asia, South America, on the African expanses. If black leopards are more common in the mountains of Ethiopia, black jaguars live in the American wilds. 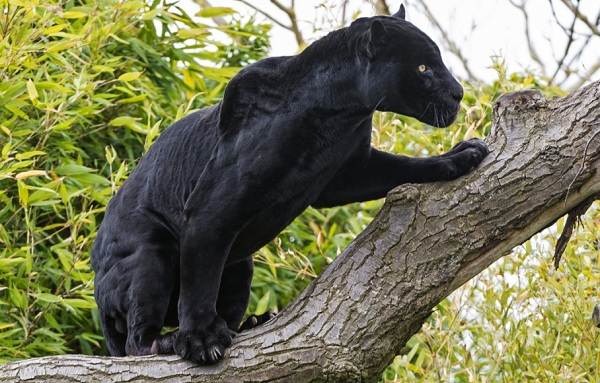 In the wild, the panther is attracted by tropical forests, the foot of the mountains. Places where the black panther dwells, most often impassable and remote from human settlements. When meeting a person, animals do not show aggression if they are not hungry and do not need self-defense. A dangerous predator possesses cunning and great strength.

Black panthers lead a predominantly nocturnal lifestyle. Color gives them a significant advantage in hunting. They move silently, smoothly, the perfect sense of smell makes it easy to detect prey.

In the afternoon, after long walks in the dense forest, the panthers sleep for a long time among the branches. For recreation, places are found in dense thickets at an altitude of 4-5 meters.

The nature of the animals is different in its own way, perseverance, determination. Attempts to make the beast home, tame inevitably ended badly. Therefore, it is very rare to see black panthers on circus performances. 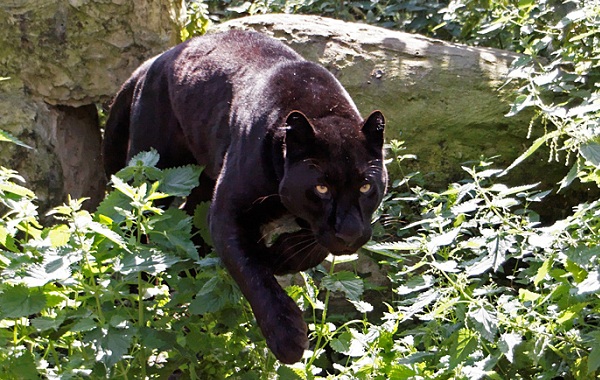 Practically they do not give in to training. The only attraction with panthers in Europe is Maritsa Zapashnaya. The unpredictability of animals is always associated with a great risk in working with them.

They are individualists in their own way, preferring solitary existence or in married couples. The creation of pride, like that of lions, is a rare exception. Each individual or pair has its own territory, which can not be violated by its relatives.

The panther is considered almost the most bloodthirsty predator among other feline representatives. A hungry animal does not choose a victim, rushes to all living things. The panther has no fear of anyone. To the man of the panther himself can come in contrast to other cautious relatives.

Predatory animals are always attractive inhabitants of zoos. Visitors from different countries show an uninterrupted interest in the wild. The mystery of other worlds, the secrets of their inhabitants attract people who make the panther symbols of different cultures. It is not by chance that the image of Bagter’s panther, according to Kipling’s book «Mowgli,» gained wide popularity. 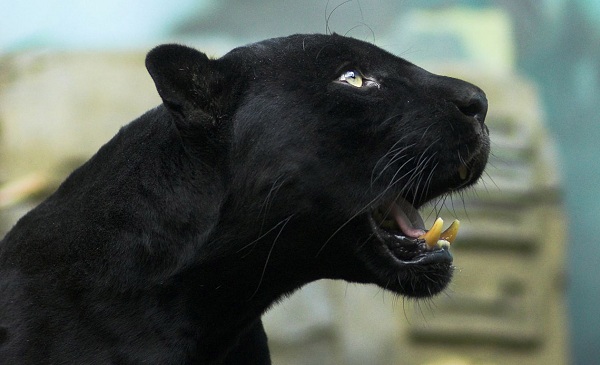 An interesting fact is noticed by fans of the English writer. In the fairy tale, in fact, the male black panther Bagir is shown. But in the process of translation there was a substitution of the gender of the character, since the word panther is of a feminine gender. In addition, inherent in the image of grace, grace, wisdom, beauty are usually attributed to the heroines.

Favorite food predator — meat of large herbivores: buffalo, antelope, zebra. Theft of domestic sheep, cows, horses, pigs that have been without human supervision is a common thing. Hungry animals are satisfied with monkeys, game, eggs from the nests, can eat even the fruits of the garden trees.

The search for victims of the panther is conducted on the ground, often guarding the prey at the watering places. Eating meat takes place on a tree. The carcass is torn to pieces with sharp teeth and jerks of the head. This feature distinguishes the panther from the relatives of lions and other feline relatives. 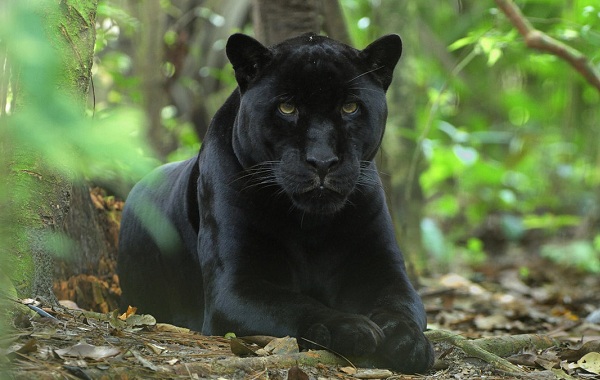 At an altitude, food is inaccessible to terrestrial competitors — hyenas, jackals and other predators.

Without food, animals can withstand 4-5 days. But then the panthers are able to sneak into the dwelling, the farmstead, the cowshed in search of prey. It is interesting that a well-fed animal will not even be touched by a kid, standing by its paw.

A hungry beast will not stop at anything. In cannibalism, a panther is seen, but to a lesser extent than tigers or lions.

Sexual maturity kittens family reach to 2-3 years. The warm climate in the habitat allows to reproduce all the year round. After mating the female looks for a dumb safe place for delivery. Most often, it is a hole between the roots of trees, a secluded place in the cave, a large hollow. Duration of pregnancy is 3-3,5 months.

In the litter there are usually two kittens, much less often there is one, there are exceptional cases of the appearance of 4-5 babies. Kittens appear in the light of the blind. Panther is a caring mother. To the heirs, at first she does not let anyone in, she does not go away anywhere. 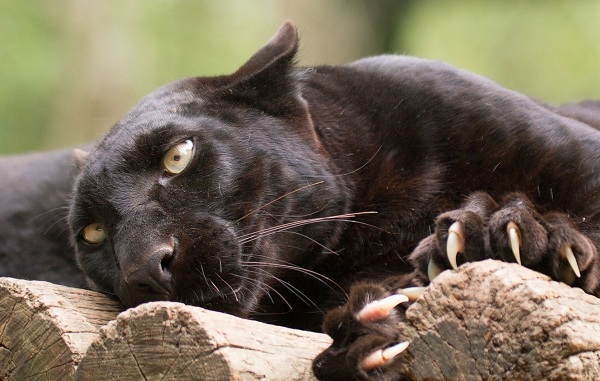 Up to 10 days the female is only occupied by the little ones. She warms them, licks them, feeds them. No one dares to approach the mother’s lair. Kittens eat milk, the father of the family cares about the female, brings her food.

When the female runs to the watering place, the little ones remain shortly under the tutelage of their father. In the worries of the panther, the mother sometimes leads herself to exhaustion.

When the kittens have sight and hearing, the female begins to gradually restore its strength, return to normal life, but continues to take care of the offspring. Custody of growing kittens, training their hunting skills, movement lasts about a year, after which the young ones are coping with the wisdom of animal life. 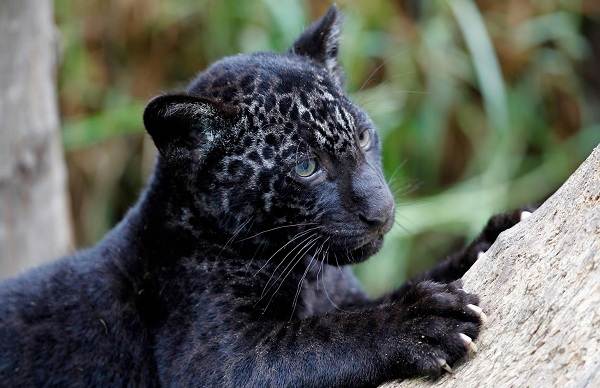 Under natural conditions, panthers live 10-12 years. In conditions of captivity, under the control of a person, life expectancy increases to 20 years. Observations of predators show that in the second decade of life there is a decline in the vital activity of animals.

The color of the offspring largely depends on the color of the skins of the parents. Black kittens are a rarity, as the recessive black gene is suppressed by others. To achieve the emergence of a new generation of black panthers can be provided with the same ancestors. As a rule, target breeding of feline predators is practiced in nurseries. 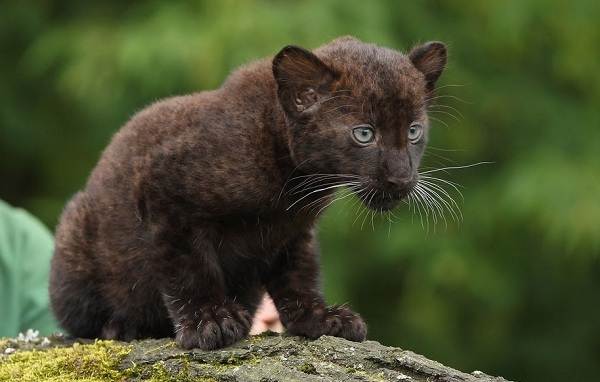 Nature creates real panther beauties not so often. The influence of a person on maintaining such a miracle is very tangible. Both in mythology, and in life, strength and beauty win.

The bee is an insect. Description, features, species, lifestyle and habitat of the bee