Not all people are lucky enough to see a representative of the stork bird of the black stork in life. The thing is that these birds do not like human society very much, therefore they keep from it as far as possible. 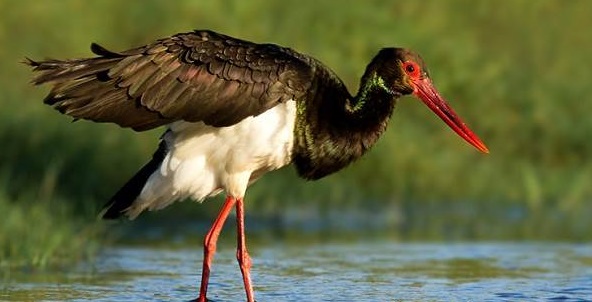 For many, the word stork is associated with something warm, family, cozy. In fact, it is these birds that are the subject of imitation, even for humans. They are excellent family men and excellent parents. Black Stork is listed in the Red Book.

Description and features of the black stork

From all the other fellows this one differs in the original color of feathers. The upper part of his body is covered with a black feather with green and red tints. The lower part is white. The bird is rather large and impressive in size.

Its height reaches 110 cm with a weight of 3 kg. The wingspan of the feathered one is about 150-155 cm. The slender bird has long legs, a neck and a beak. The legs and beak are red. Chest crowned with thick and shaggy feathers, which is a bit like a fur collar.

The eyes are decorated with red outlines. There is no way to distinguish a female from a male, there are no signs of their difference in appearance. Only males are larger. But the young black stork from the mature can be distinguished by the shape around the eyes. 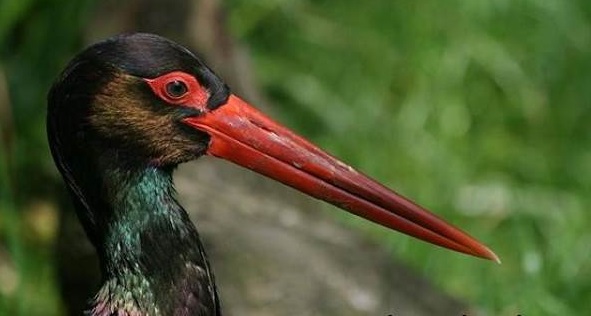 In young it is gray-green. The older the bird becomes, the more red shades become. The same thing happens with plumage. In young it is somewhat faded. With age, the plumage gets more gloss and variegation.

Currently, there are very few storks. The entire vast territory of their migration numbers no more than 5,000 pairs of these birds. One of the most disappearing of all storks is black.

Why this happens is still not clear, because this bird in nature has practically no enemies. Its impressive size scares small predators, and from large it is able to escape.

An interesting manifestation of care for their babies, these birds show during too hot a period of time. When it is unbearably hot in the street and, accordingly, in the birds’ nest, they spray the newly born chicks and the entire nest with water. Thus, they manage to lower the temperature. 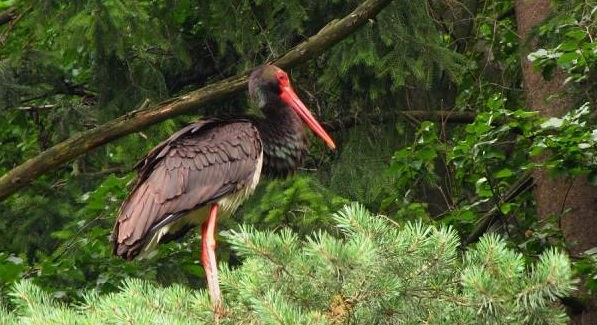 According to the description of the black stork, you can determine the beauty and beauty of this bird. Those who are lucky enough to see this miracle of nature in real life, remember this moment with affection for a long time. Grace and simultaneous simplicity in an incredible, seemingly combination can be seen on the photo of a black stork.

From the observations it became known that the white and black storks have different languages, so they absolutely do not understand each other. In one zoo they tried to pair up a black stork male and a white female. Nothing came of it. So, as these species have completely different methods of courtship during the mating season, and different languages ​​have become a great barrier to this.

Habitat and lifestyle of the black stork

The whole territory of Eurasia is the habitat of this bird. Black stork lives in certain areas, depending on the time of year. It was observed that during the breeding season, these birds are observed closer to the northern latitudes. In winter, however, they fly to countries in Asia and Central Africa. 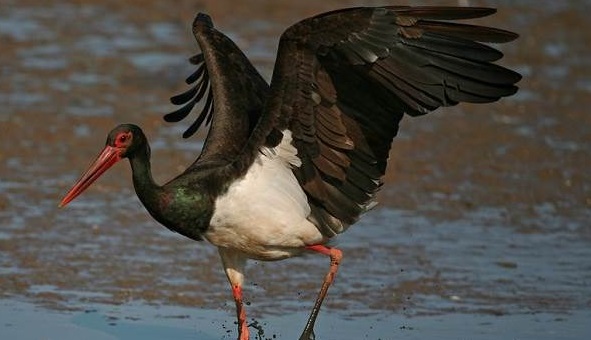 Russia also attracts the attention of these wonderful birds. They can be seen both on the territory adjacent to the Baltic Sea and on the territory of the Far East. Primorye is considered their most favorite place.

Most black storks are in Belarus. These birds prefer the forest marshland, with rivers and streams, away from human settlements. Just such places in Belarus.

Fearful black storks are comfortable there not only to live, but also to breed their offspring. To spend the winter they have to go to warm countries. Those birds that live permanently in the South of the African continent do not need flights. Stealth and caution in black storks originally laid.

They do not like being disturbed. Fortunately, in the modern world there are many different devices, thanks to which you can watch birds and animals without intimidating them or attracting their attention. In Estonia, for example, in order to better study the lifestyle of black storks, webcams were installed in some places. 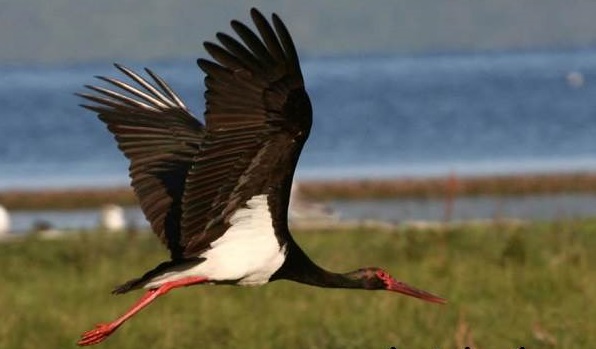 It is interesting to watch the bird in flight. Her neck is strongly stretched forward, and her long legs are pulled back at this time. Like white storks, black is often just hovering in the airspace with wings spread and relaxed. Their flight is accompanied by original cries, which reach us like “chi-li”.

Listen to the voice of a black stork

During their migration, birds can travel enormous distances, up to 500 km. To cross the seas, they choose the narrowest of their territory. They do not like to fly over the sea for a long time.

For this reason, sailors rarely manage to see black storks hovering above the sea. In order to cross the Sahara desert, they keep closer to the coast.

The last decade of August is characterized by the beginning of the migration of black storks to the south. In mid-March, the birds return to their homes. In view of the secrecy of these birds, little is known about their way of life. 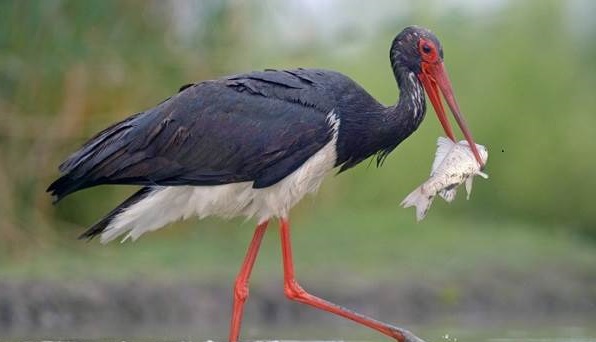 Black storks prefer to eat live products. In the course is a small fish, frogs, insects living near the water, sometimes even reptiles. In rare cases, they can feed on aquatic plants. In order to find food this bird sometimes overcomes up to 10 km. Then back to the nest again.

In nature, there are 18 species of storks. They can be found anywhere. The following representatives are considered the most common and popular: 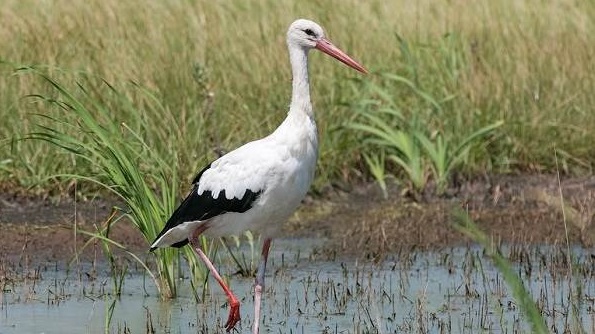 On the photo is a white stork 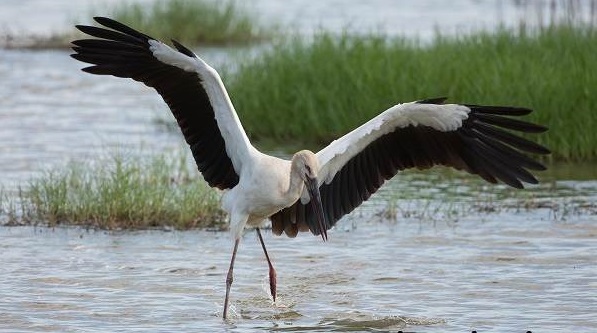 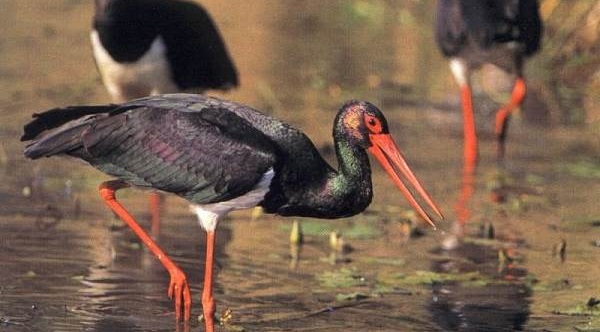 In the photo the stork stork 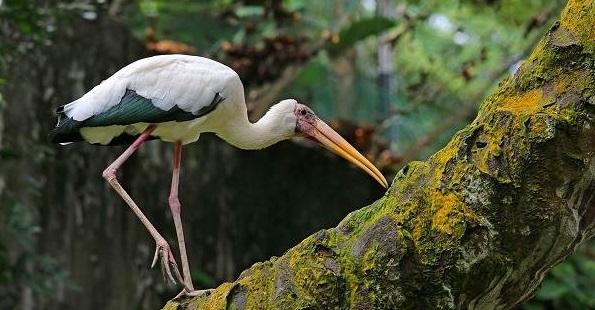 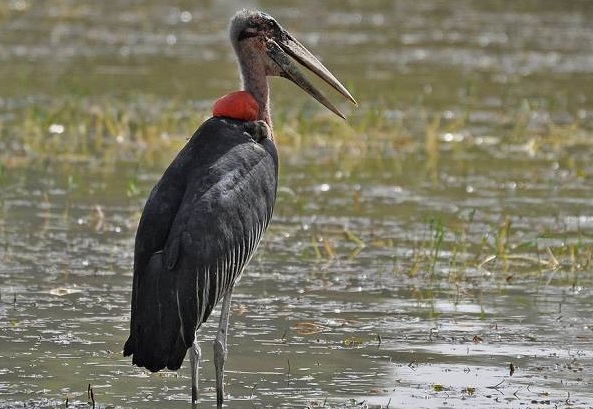 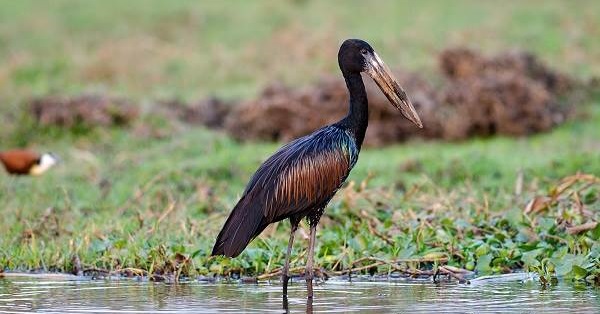 Reproduction and life expectancy of the black stork

About the black stork, we can say that it is a monogamous bird. They carry loyalty to their couple through life. The creation of a pair is mainly March-month. For nesting, these birds choose mountain ranges.

The nest of the black stork is located on the branches of a tall tree or in the area of ​​inaccessible cliffs. These birds build their homes from branches and twigs with different lengths.

Interconnect them with turf and clay. A bird can use one nest throughout its entire life, only periodically updating its state. For this purpose, new branches and turf are used, which is why over time the nest acquires large sizes.

These birds do not like the neighborhood, not only with people, but also with each other. Their nests can meet in 6 km from each other. Black storks become sexually mature at the age of three. 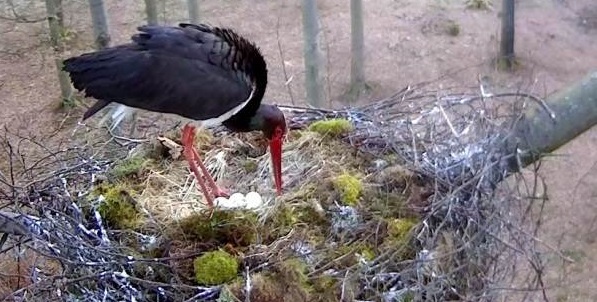 From the warm edges, the male usually arrives first. He arranges home, waiting for his soul mate. In order to call the female, the male has to straighten his plumage on the tail and issue a hoarse whistle.

In the nest of the pair is mainly from 4 to 7 eggs. Both caring parents are engaged in incubating them. Hatching begins as soon as the first egg has appeared, therefore the chicks appear in turns.

For ten days, the kids just lie helpless. After that, they have small attempts to sit down. For their good development, parents have to feed the chicks about 5 times.

The legs of chicks grow stronger after 40 days. Only after this time they begin to slowly get up. Storks take care of their offspring for two months. These beautiful birds live up to 31 years in captivity and up to 20 years in the wild habitat.

Yurok bird. Lifestyle and habitat of the bird Yurok