Everyone knows that a huge number of spiders inhabit our planet. Spiders are the most ancient representatives of the fauna and accompany humans since ancient times. 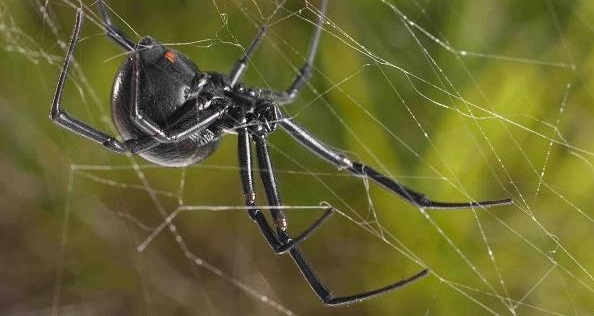 Some of them are absolutely not dangerous, but others are capable of causing great harm to a person. The black widow spider belongs to the group of poisonous and dangerous spiders and in order not to become its victim, you need to know how it looks and what its main danger is.

Description and features of the black widow

Black widow spider is famous for its unusual appearance. We can say that it is the most poisonous and dangerous spider in the whole of America. This terrible name this spider has received for the reason that female widows eat their males after mating and that is why the life span of the male individual is negligible.

Also, the female eats the male when it takes him for food. Scientists claim that by eating the male, the females receive the necessary proteins, which will later be useful for the little spiders. 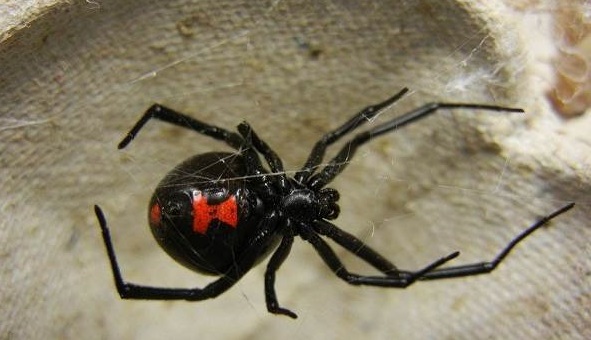 Males are very cautious about the black widow’s web. If the female is not hungry, she will be happy to let her future father into her territory and share the marriage bed with him, and if she is hungry, she will immediately eat a slow-moving groom. To prevent this from happening, the cavalier spiders dance a kind of mating dance, shaking their little bodies and paws, swaying slightly from side to side.

A black widow leads a hidden lifestyle and for no reason never attacks people. Most often, people suffer from spider bites, which has climbed into clothes or shoes. The reason can serve only if a person tries to disturb her home. In this case, the attack of the black widow will look like self-defense.

Seeing the black widow’s spider in the photo, one can not help noticing the red markings located on the rounded tummy of the «widow». A large red spot is worn only by individuals of the female sex. They are considered the most poisonous and dangerous than the males. 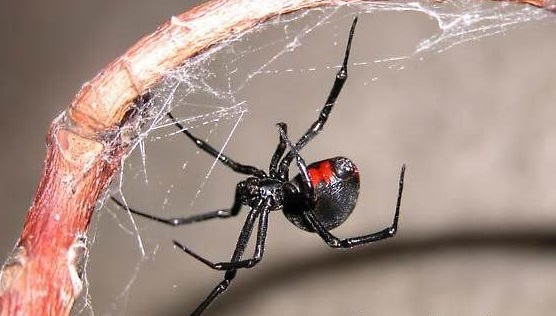 The description of the black widow’s spider is very interesting.

The black widow spider has 8 legs, like all representatives of arachnids. Females are noticeably prettier and larger than their males. It has a brilliant black outfit with a bright red mark on the abdomen, which in its form resembles an hourglass.

The male black widow spider looks much paler, it has a weak yellowish color and is several times smaller than the female. It is rarely possible to see it, since for the most part they go to be eaten for the sake of the continuation of the future race. Females in length reach 40 mm.

Another distinctive feature of the black widows spider is very shaggy legs. On the hind legs are small bristles, with which they can crawl to their prey.

Eggs of black widows lay in peculiar balls. In one such ball is usually from 250 to 800 eggs. Cubs are born whitish, but after a while they become similar to their parents. 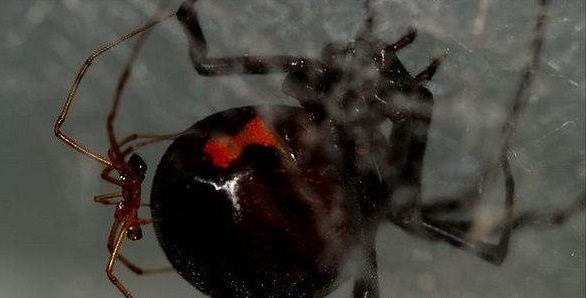 As children of their parents, little spiders possess innate cannibalism.

After the poison enters the body through the body there is a rash, nausea can occur, fever can rise. This condition lasts up to 12 hours. It is best to quickly take care of the antidote.

The poison of the female has a stronger effect on the body than the male. Thanks to modern medicine, it was possible to reduce the number of deaths from the bite.

The black widow spider lives all over the globe.

Their usual habitats are: Europe, Asia, Australia, Africa, America. The black widow spider in Russia was previously exotic and could only be seen in insectariums, where scientists were engaged in their research. 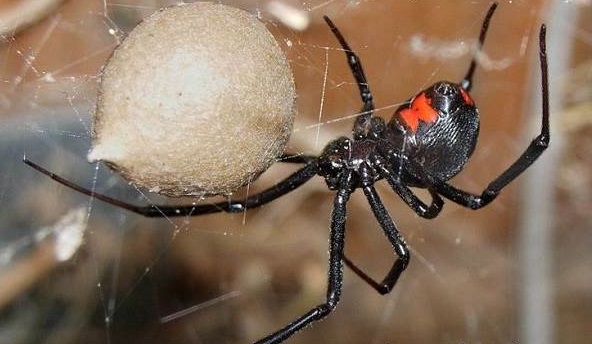 However, the fact that they are quickly emigrating to Russia has now been confirmed. Recently, individuals of the female and male spiders were found in the Urals and in the Rostov region.

The black widow loves to penetrate into human buildings and weave their webs there. Favorite places for them are dry and dark shelters, for example, basements and sheds.

The spider can live in the old stump or mouse hole, as well as among the dense vegetation of the vineyard. In winter, they are looking for warm conditions and are able to penetrate even into a man’s house. The risk for a black widow is considered to be children and old people, who by their own lack of understanding or curiosity can come into contact with this poisonous creature. To avoid the deplorable consequences of your enemy, you need to know in person.

Karakurt is the second strongest representative of black widows.

Shows the most activity in the summer months. The spider is not aggressive and rarely attacks first, only when it feels endangered. An interesting fact is that the poison of karakurt does not act on dogs, but can easily kill an adult camel. A brown widow is a type of black widow. 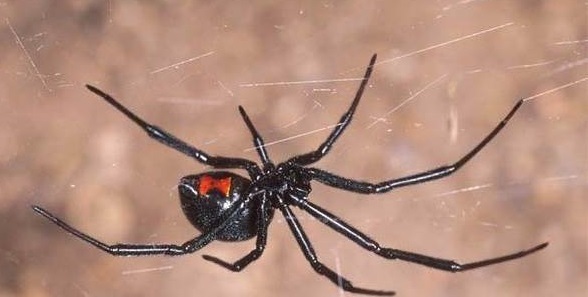 Their power extends from northern America to the borders of Texas.

Their color is generally from light brown to dark brown. On the lower part of the abdomen there is a bright orange mark.

A brown widow is considered the safest spider of all widows. For humans, poison does not pose any danger. Red katipo is another relative of black widows.

Only a few of them remained on the entire planet. Katipo means stinging at night. The size of them is not great. The female is black and has a red stripe on her back. Habitat — New Zealand. Web of triangular shape. Food insects.

Australian black widow — habitat Australia. The female is small (10 mm), the male is much smaller than the female (4 mm). In Australia, this type of spider is considered very dangerous.

When you bite a person feels severe pain. There is an antidote that removes the deadly danger, but as it turned out, the pain after the bite still does not pass.

About the black widow’s spider it can be said that they feed like other arachnids.

The diet of the spider are insects. They hang upside down and wait for their prey. Not averse to eat flies, mosquitoes, midges, beetles and caterpillars.

As soon as the potential food enters the web, the spider creeps in order to tightly wrap the burning food in the web.

With their fangs, spiders pierce their prey and inject into the victim’s body their poisonous solution, which thins the body of the prey, and it dies. 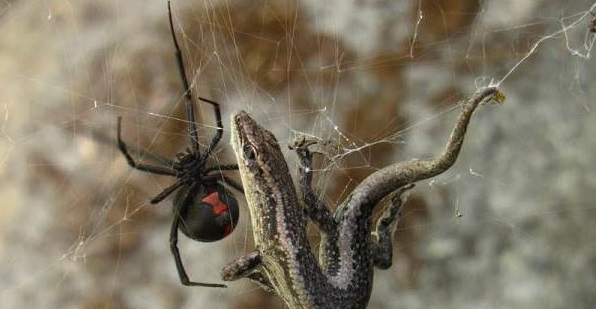 An interesting fact is that the black widow spider can go without food for a long time. If there is no food in the vicinity, the spider can live for about a year without food.

Reproduction and life expectancy of a black widow

During intercourse, the male with the help of pedipalps transfers the sperm into the body of the female. Sometimes only one pairing occurs, however, the female can store the seed in her body and use it, for example, after several months.

The female black widow spider lays its eggs in silky balls, there the eggs are completely safe. Females incubate babies for one month.

The life span of karakurt females is five years, and the life of males is much shorter than that of female black widow spiders.

The life span of spiders depends on many factors. It may be a shortage of food, the nature that surrounds them, but the most important thing is for spiders their home.

In the absence of a reliable home, which for them is durable, like a silk and a dense web, the black widow spider karakurt uniquely dies.