Description and features of the blue cat

The Russian blue cat is a purebred pet, distinguished by a specific shade of wool — blue (gray with a silver tint). Cats of the represented breed have a graceful body and medium build, long tail, neck and legs. A notable feature of the Russian blue is its bright green almond-shaped eyes. 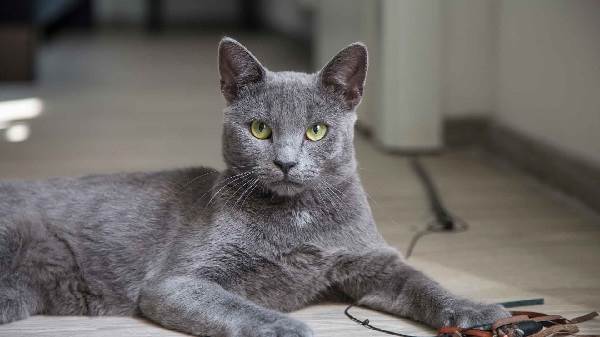 The blue cat breed is characterized by a dedicated, but demanding character. Cats show an amazing mind and understanding of man. One of the interesting features of the breed is that the animal never allows itself to release its claws in relation to humans. Despite the presence of a pronounced nature, the harmfulness of the Russian blue is not peculiar.

It is not in vain that the breed is considered one of the easiest to maintain, as the blue cat quickly learns to the tray, is clean and does not get bored during the absence of the owner — each interesting thing turns into an attractive toy for the cat.

Recently, there has been a decrease in demand for this breed, the number of animals decreases accordingly, to the point that world experts are inclined to one statement: if it goes on like this, the Russian blue will cease to exist in its former guise. 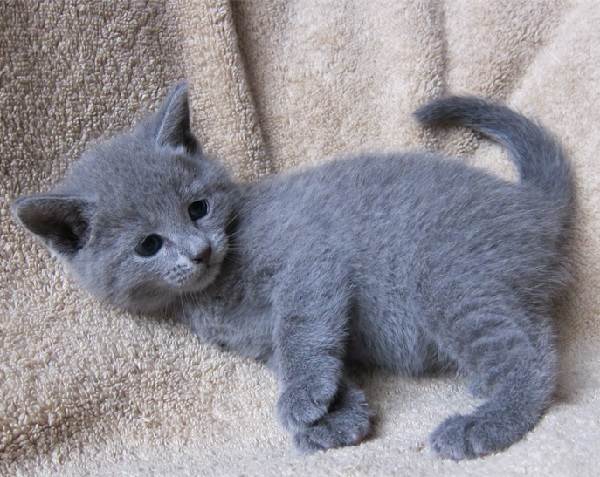 Despite the ideal nature of the animal and its attractive appearance, today the demand for a cat is incomparable with its past popularity. For the breed Russian blue cat the price varies, depending on the nursery, as well as the characteristics of each animal. The average cost of a Russian blue kitten is about 15 thousand rubles.

The photo of a blue cat allows to determine that it is divided into two main types: American and European, which are markedly different in appearance. It is worth noting that this breed of cats is natural, and artificial influence can be called minimal, since it has made only minor adjustments.

For the American type of breed presented, a small body size, round eyes, large ears, set apart, are considered characteristic. The American type is quite difficult to confuse with the European, because these animals have a “touching” appearance and miniature.

The European type of Russian blue implies an animal with a more serious and impressive appearance. The Russian blue cat, whose photo can be seen on this page, is distinguished by medium or large body size, vertically set large ears and almond-shaped eyes.

Another less noticeable but significant difference between two representatives of the same breed is the shape of the paws. So the European-type paw has an oval shape, while «American» cats have round paws.

This feature has a significant impact on the gait of the animal: the oval shape of the paws creates a visual impression that the cat is tiptoeing. Russian blue — not the only representative of the cat world with a hint of wool. 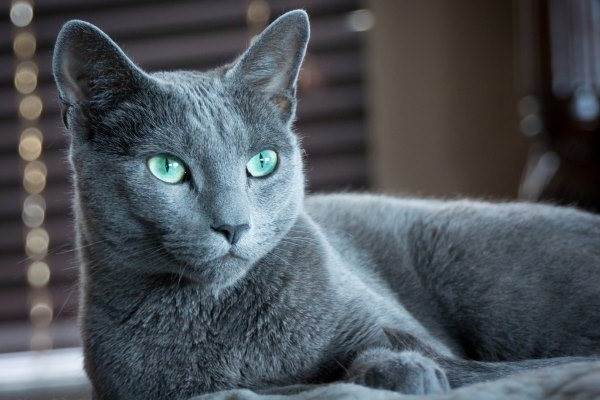 Another bright representative is considered the British blue cat, but this is a completely different breed, with its own character and appearance. This breed is characterized by cats with blue eyes.

Despite the fact that blue cats of the Russian Blue breed perfectly preserved their natural hunter instinct, which manifests itself even more pronounced than in other breeds, the animals remarkably adapted to living at home. 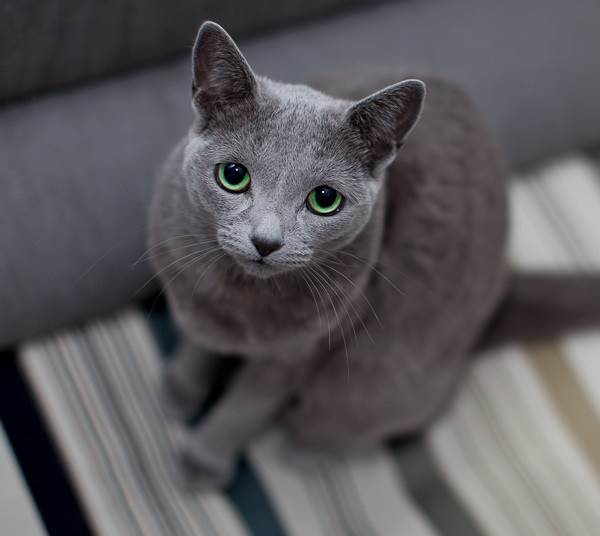 Thus, cats do not differ to the street, open space, walking, etc. Nevertheless, the animal has not lost its active life. Russian blue is quite difficult to see in peace and inaction.

She is considered to be incredibly inquisitive, so she certainly explores all unfamiliar or new items that appear in her way. The cat prefers a variety of toys, but everyday things turn into interesting fun for her.

The hunting instinct shows the animal when, hiding in a secluded corner, it rushes out of the shelter and jumps on its target. Games of this kind are the most fascinating for Russian blue. 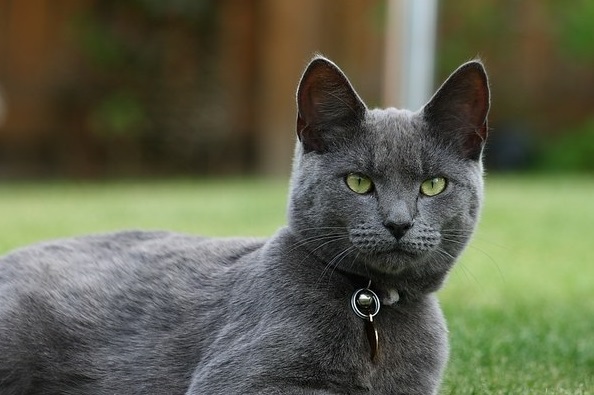 In addition, the structural features of the body of the animal allow him to jump high, so the cats are happy to explore the elevated terrain in the house or apartment. At the same time, not looking at the increased playfulness, the Russian blue does not bother the owner with its excessive attention, but with pleasure spends time with people in active games.

Care for a blue cat

Russian blue is undemanding in leaving. The natural formation of the breed has contributed to good health and immunity to common cat ailments, so the cat is not afraid of even cool weather.

Short hair needs to be brushed weekly with a bristle brush. Aquatic procedures animal should be subjected to every 2-3 months. The only limitations are excessively long exposure to the sun, the content of iodine, copper in food, as this affects the browning of wool.