If the dream and collect mentally all the relatives of corvids beauty contest, which is sometimes arranged among people, the winner will be known initially.

A large part of the sympathies of the audience will definitely be one amazing bird – blue Jay. Feathered has a beautiful appearance, with smoky-grey shades body, blue wings and tail, a cap of black color. 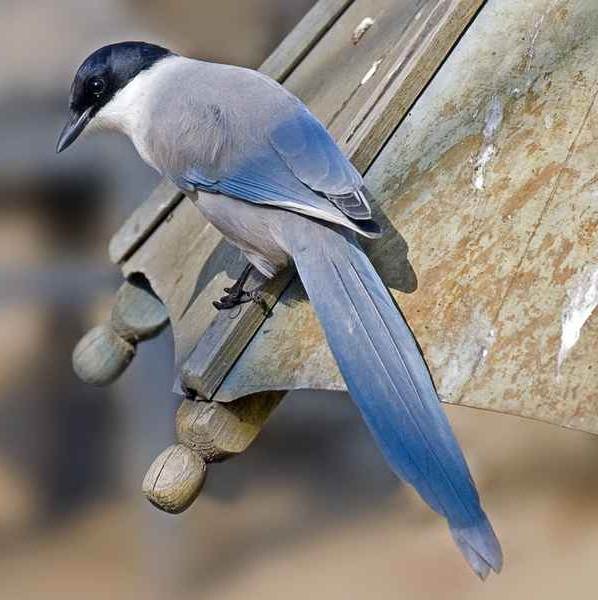 It would seem, at first glance it is not noticeable bird, but blue feathers on the wings and tail. But something in her is it that makes people think of the blue Jay, how about some kind of ethereal and magical being.

Many legends, songs, tales dedicated to this wonderful creation. According to the legend, the man who at least once in his life held this bird, or touched her, finds happiness for the rest of their days. 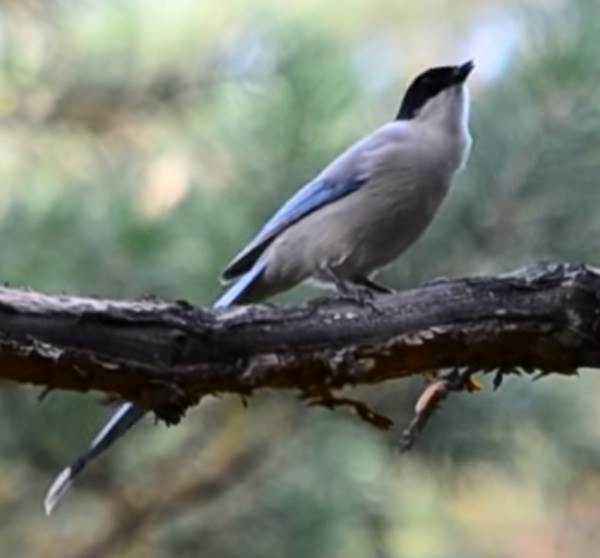 But more so bird of happiness is mythical fiction. In real life, before us will be supplied brand landing, but a wonderful bird. People tend to believe in miracles. This miracle is the blue magpie.

Description blue magpies speaks about the many similarities of this bird with the usual magpie. Only her limbs somewhat shorter and less beak. Looking at photos of the blue magpies, it becomes clear that special decoration of a bird is its gorgeous plumage, which gleams and glows with azure paints the background of a Sunny day.

Different from the usual magpies and the color of the plumage on the breast. She got it with beige shades. Sometimes color can be a rich brown. This is a small feathered smaller than the usual forty. Its average length is 33-37 to see. 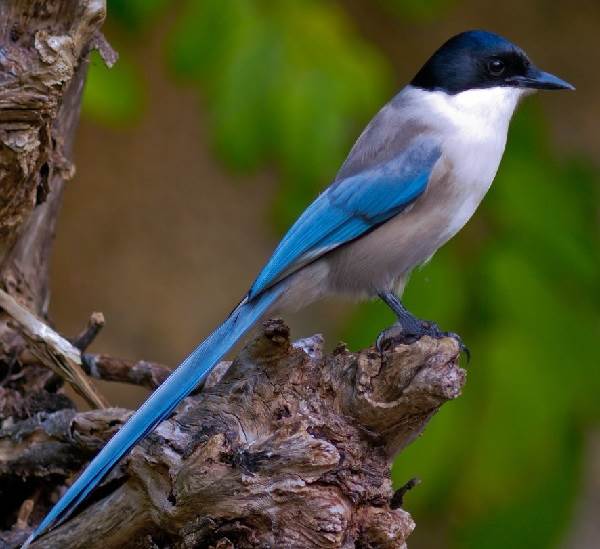 Iberian Peninsula and Eastern Asia – places where you are likely to meet this wonderful being. Blue magpie is found in Portugal, Spain, some regions of Russia close to the Amur river and Asian countries. The birds inhabit deciduous and mixed forests of the European continent.

Birds prefer sand dunes with numerous thickets of eucalyptus, olive groves, gardens and pastures. In the far Eastern countries, the blue magpie can be found in floodplain forest. Where dwells the blue magpie consist mainly of stunted forests and shrubs. 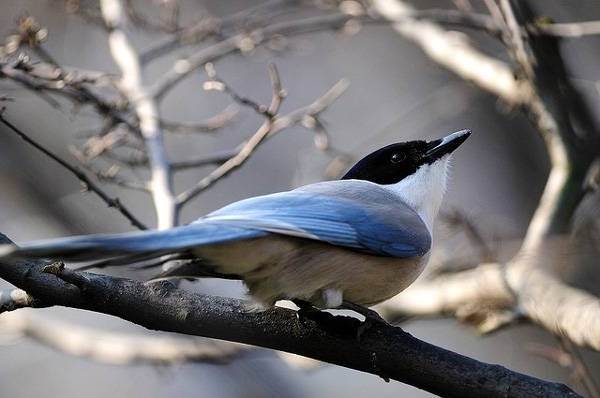 To the design of its nest this bird is treated with complete seriousness. It is located in most cases on top of the tree, the crown of the tree. The nest consists of roots and twigs, fixed by clay and paved inside with soft moss or feathers. It had no roof. But the slot is located on the tree, the rain it never misses.

Scientists say that there was a time when this beauty was found everywhere. But then came the ice age and many species of birds and animals had to move to other places.

Settlement of blue forty are always at a decent distance from people. Only autumn and winter can cause the bird to get closer to people in search of food. At home bird can be the real ornament of a collection of domesticated birds. 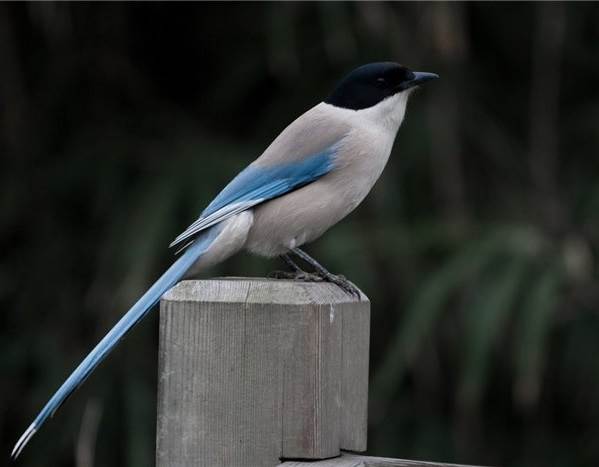 In captivity feathered feels great and gets used to the person. In such circumstances, they need a special enclosure. It is seen that reproduction in captivity is not as intense as in the wild.

These amazing birds have a high loudness. Blue forty incredibly clear voice. Only during periods of nesting and rearing of their offspring bird is a quiet, hidden, and modest lifestyle.

In the summer they do away away from everyone, in the most remote forest thicket. Birds prefer to live in packs. The number of flocks depends on the time of year. With autumn in spring in the pack may be about 40 individuals.

In the summer, their number is significantly reduced to 8 pairs. The distance between nests of these couples do not usually does not exceed 100-150 m. Some birds don’t mind living so close together, on the crown of the same tree. 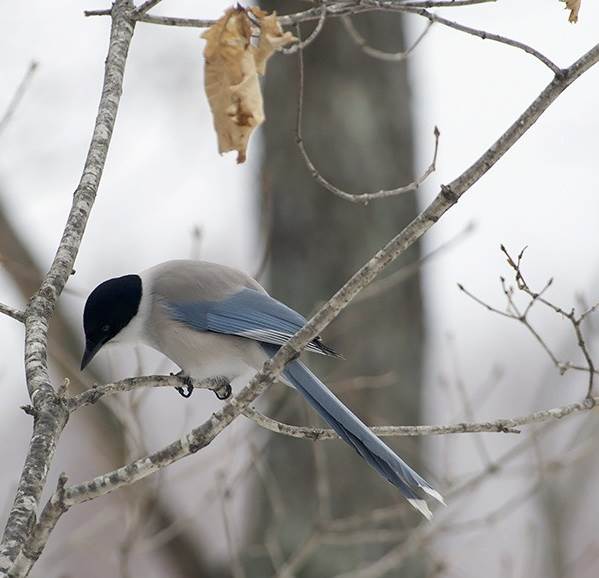 These birds can carry, both settled and nomadic way of life. They have not so many enemies. They are afraid of hawks, which hunt for blue forty has long been in the habit. Love to profit by them and the eagles, far Eastern cats.

Though live blue magpie flocks not to say that couples in close communication. To regroup and flied in a pile makes them a danger, in which birds are mutual assistance to each other.

Not seen cases as rebellious and gathered in a big pile of blue magpies with the battle chased the predator from their counterparts. Does not inspire confidence in the birds and people. They raise an incredible noise with his approach, and some men can even bite the man in the head.

The great danger for many birds comes from the serpent. They easily climb trees, get to the nests and destroy birds ‘ eggs. Blue magpies have such a room is rare. Birds trying to peck the back of the enemy and even pulled by the tail.

This makes the onslaught of the creeping retreat. With the advent of autumn, the birds increasingly have to worry about food. At this time they may be noticeable to people. 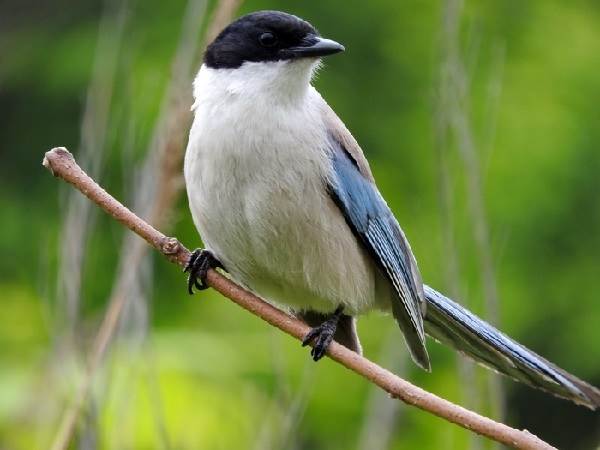 These smart birds can profit by bait left by hunters in traps. They have no problem is impossible to lower the spring, but sometimes this trick is a life feathered. The bird remains in the trap as bait and eaten by a predator.

About azure Jay fishermen tell that this is not such a creature, as it is narrated in a fairy tale, foreshadowing, goodness and success. In fact, it may be feathered with mischief to steal from the fishermen caught fish. It happens in the blink of an eye. Even the fisherman may not always understand what happened.

The question of why magpies attack doves in recent time is often. Scientists this fact is associated with the magpie feeding its Chicks. It was during this period, they become aggressive.

The main foods of blue magpies and their babies are the insects and larvae. They are not averse to profit and plant food. Often in the course are spiders, frogs, lizards and rodents.

If possible, the blue magpies are not averse eggs singing counterparts. The propensity for such predatory act more acceptable to the ordinary magpie, but blue sometimes they are not lagging behind. 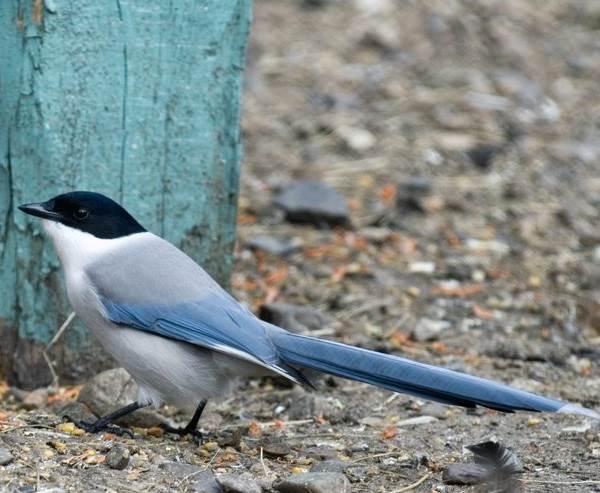 In addition, birds are happy to eat the various berries, seeds. The most favorite treat of birds are the fruit of the almond so they settle on opportunities near these trees. In the winter, as a godsend for blue forty is discarded bread. In the same way they eat meat and fish.

Forty listed in the Red book. Its population decreasing every year. People are trying to take these wonderful birds under their protection setting for their feeders in the winter.

The nesting period ends with the laying of eggs, this happens in late spring-early summer. Mostly in the nest, there are up to 7 pieces. For two weeks the female is engaged in purely for their hatching. Male provides her with food. Blue magpies are very caring parents. They take care of their kids for a long time, even after they learn to fly. 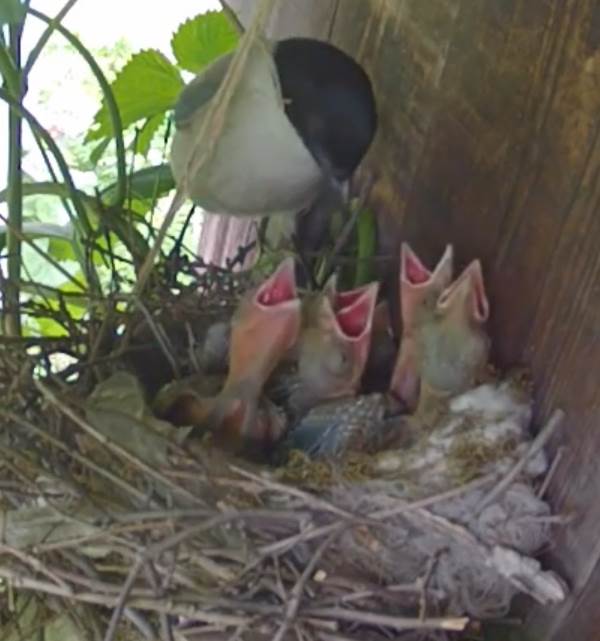 The egg of the cuckoo in the nest of blue magpie is quite common. The born bird-foundling does not throw their neighbors Chicks out of the nest, as it often occurs with other birds.

But Chicks-foundlings to such an extent hungry and greedy that most of the food gets to them. This Chicks blue magpies come sometimes to exhaustion and death at an early age.

In the wild these birds live for about 10 years. At home, where they practically threatens nothing, they can live for a couple of years longer. Blue Jay by announcement on the Internet. Special shelters for these birds are not practiced.