Chimpanzees are considered the closest animals to humans . The chimpanzee gene set is 98% similar to that of humans. Among these primates there is an amazing kind of bonobo. 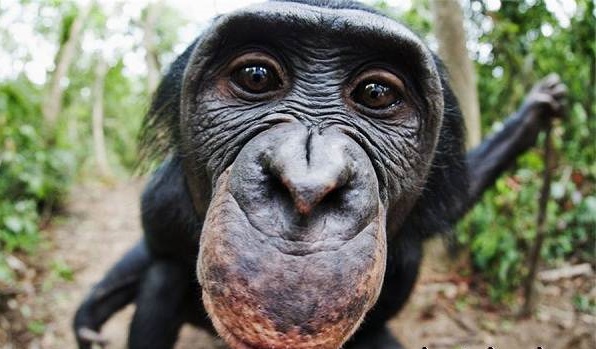 Some scientists have come to believe that it is chimpanzees and bonobos that are the closest «relatives» of humanity, although not everyone supported this view.

Bonobo monkey is actually very similar in appearance to humans. She has the same long legs, small ears, an expressive face with a high forehead. Their blood can be donated for a person without any preliminary treatments.

While it is necessary to first remove antibodies from the blood of a chimpanzee. The genitals of the female bonobo have approximately the same location as the woman.

Therefore, for this type of monkey there is the possibility of copulating face to face with each other, and not in the way that is common in all other animals. It has been observed that bonobos mate in the same positions as humans. 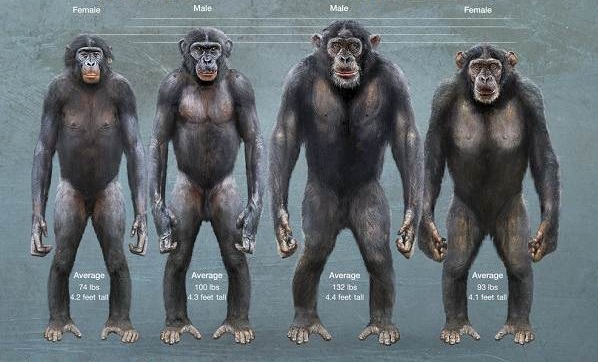 Interestingly, they do this daily and several times a day. For this reason they are called the sexiest monkeys on earth. For a bonobo male, and females, too, sex is the most important component in life.

They can deal with them everywhere and under the most diverse circumstances. Perhaps that is why dwarf bonobos have never been aggressively adjusted to anyone.

Features and habitat of bonobos

On the black face of the bonobo, bright red lips are clearly visible. They have long and black hair with a par in the middle. Males are usually larger than females, this can be seen in the bonobo photo . Their average weight reaches 44 kg.

The weight of females is about 33 kg. The average height of this animal is up to 115 cm. Therefore, the word “dwarf” monkey , which is often applied to bonobos, should not be understood in the literal sense. 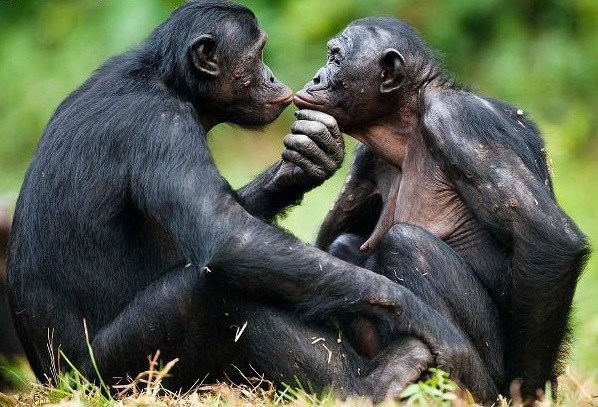 Small animal head with poorly developed brow ridges and wide nostrils. Bonobos female breasts are much better developed than those of other monkey species . The whole body of animals is distinguished by striking grace with narrow shoulders, thin neck and long legs.

Very few in nature left these monkeys. Their number is about 10 thousand. Bonobos inhabit the forests of the tropics of Central Africa in a small area between the Congo and Lualaba rivers.

The wet rain forests along the Congo River are the favorite places of this dwarf monkey . Closer to the southern border of the range, along the Kasai and Sunkuru rivers, where the rainforest is gradually turning into a vast savannah, this animal is becoming smaller.

The behavior of the bonobos is radically different from the behavior of an ordinary chimpanzee. They do not hunt together, do not find out the relationship with the use of aggression and primitive war. Getting into bondage, this animal can easily handle various objects.

Bonobos differ from all their other brethren in that the main position in their family is occupied not by males, but females. Aggressive relations between males and females are almost completely absent, males with no complaints are related to adolescents and their young cubs. The status of a male comes from the status of his mother. 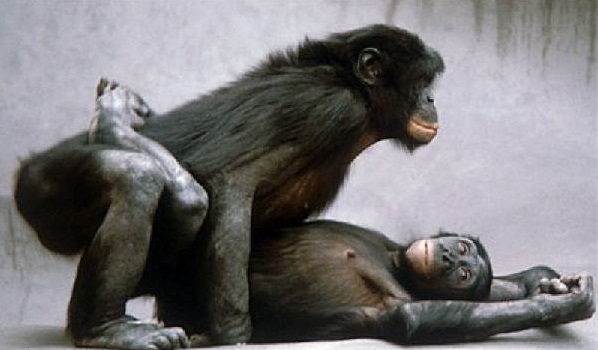 Despite the fact that sexual contacts for them above all, the level of reproduction in their population is not large enough. Many scientists claim that bonobos are capable of altruism, compassion, empathy. Kindness, patience and sensitivity are not alien to them either.

Sex plays the most important role in their lives. Therefore, in a bonobo society there is practically no aggression. They rarely have monogamous relationships. Scientists suspect that sex and age do not matter to them in their sexual behavior.

The only exception is a couple — a mother and an adult son. For them, it is unacceptable to make love. You can often notice the various sexual attraction between the males of this species of monkey .

To communicate with each other, bonobos have special sound systems that primatologists are still trying to decipher. Their brain has a good enough development to be able to perceive other sound signals.

These animals try to avoid encounters with humans. Although there are times when they may appear in the fields and even in the village. But such a neighborhood with a man is dangerous for a bonobo. People hunt them for meat. And representatives of some nationalities of those settlements use their bones for various rituals.

Females always bravely protect their children from poachers, they often die from their hands. Bonobos always hunt young. Their poachers catch and sell for good money in zoos. 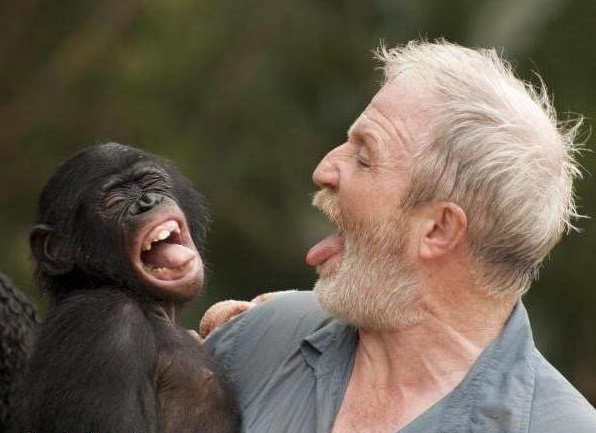 But to a greater degree, the number of bonobos decreases sharply due to the fact that their habitats are being destroyed. The third part of the African bonobos is in great danger of destruction. Therefore, protests are held all over the world in favor of protecting these wonderful animals.

These monkeys are half terrestrial, half woody. They spend most of their time on the ground. But very often they climb trees. They can be seen at high altitude, about 50 meters.

They drink with the help of «sponge». To do this, they have to chew a few leaves, turning them into a spongy-like mass. After that, they soak the sponge with water and squeeze it into your mouth.

Bonobo can build a simple tool from handy materials. For example, in order to get the termites and eat them, the bonobos will lower the wand into their home, then take it out along with the insects. In order to split a nut, these animals come to the aid of two stones.

They prefer to sleep in nests that they make with their own hands. Their favorite sleeping position is lying on their side with their knees bent. Sometimes they can sleep on their backs, pressing their legs to their stomachs. 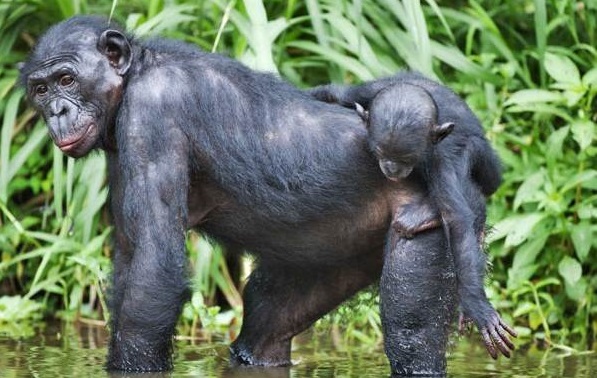 Bonobo love to take water baths in the hot season. Also in the water they get their own food. These monkeys do not know how to swim , therefore, in order to stay on the water they lean on a stick and thus maintain balance. Mother bonobo with water procedures, the child is on the back.

These monkeys are omnivores. The main product of their food, which feeds bonobo — fruit. In addition, they love herbaceous plants, leaflets and invertebrates.

A small percentage of their diet comes from animal food. They can eat squirrel, small antelope, another kind of monkey . Sometimes cannibalism is present. In 2008, there was one incident in which a dead baby bonobo was eaten.

Reproduction and life expectancy of a bonobo

Sexual maturity in the females of these animals occurs at the age of 11 years. Fertile function can last up to 30 years. Males become mature a little earlier than females — at 7-8 years old.

Frequent mating of these animals and a positive attitude towards sexual relations do not provide the expected good reproduction of bonobos . On average, the female produces a baby once every five years. 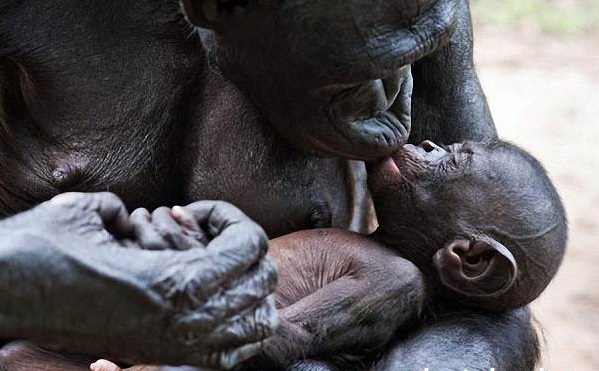 Because of the poor fertility of the bonobo, it is becoming less and less. The pregnancy of the female lasts about 225 days. Then one, sometimes two babies are born. For a while, the baby clings to the fur on his mother’s chest.

After the execution of 6 months, he gets back on her back. Even four-year-olds try to be closer to their mother. In nature, these animals live for about 40 years, live in reserves and up to 60 years.