This group of jellyfish, from the class of clinging has a total of about 20 species. But they are all very dangerous, even for humans. So named these jellyfish because of the structure of its dome. Several dozen people died from the poison of Kubomedus . So who are these sea ​​wasps or sea stings? 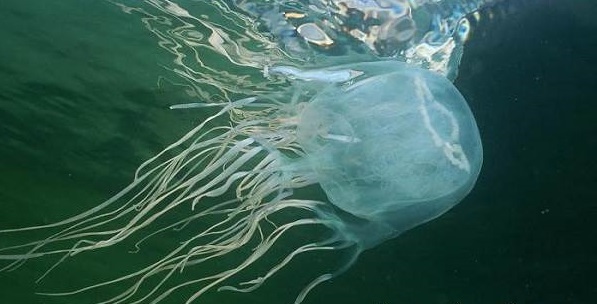 This species inhabits subtropical and tropical waters with oceanic salinity. Two species of these jellyfish were recorded in the seas of temperate latitudes. A small species of Tripedalia cystophora lives on the surface of the water and swims between the roots of mangrove trees in Jamaica and Puerto Rico.

It is undemanding to the conditions of habitat Meduzka, which easily lives and breeds in captivity, so she became the object of study of the Faculty of Biology in Sweden. The tropical waters of the Philippines and Australia have become the home of the Australian cube jellyfish (Chironex fleckeri). Small, sheltered from the winds of the bay with a sandy bottom of their favorite habitat. 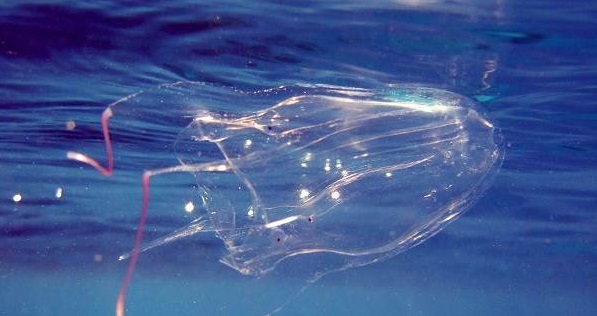 In calm come close to the beaches, especially in the cool morning or evening, they swim close to the surface of the water. In the hottest time of day, they descend into the cool depths.

Scientists are still arguing about the attitude of Kubomedus to a separate squad or an independent class. The order of the cyphoid intestinal cavity includes the jellyfish , but unlike its other representatives, the jellyfish have some specific distinctive features. The main difference is external — the shape of the dome on the cut is square or rectangular.

All jellyfish in varying degrees have stinging tentacles, but cubed jelly is more than the others. It is the most poisonous jellyfish, capable of killing a human with its poison of the streokal cells. 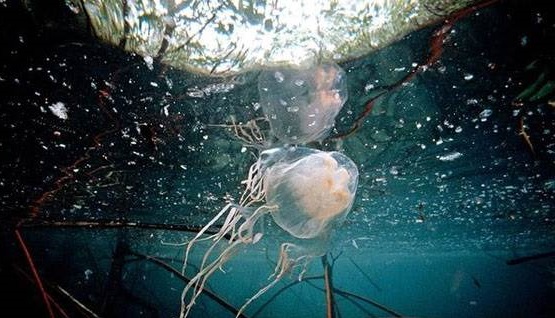 Even with a short touch, serious burns will remain on the body, severe pain will occur and the victim will start to choke. With constant contact with the tentacles of the cube jelly (for example, if a person has become entangled in them, and more than one bite has occurred ) death occurs in 1-2 minutes.

In cooler seasons, a lot of jellyfish come to the shore, and then dozens of people become their victims. They do not plan to attack a man, on the contrary, when divers approach, they swim away.

Another uncharacteristic feature for jellyfish is vision. Well-developed chamber eyes, like those of vertebrates, have excellent optical properties. But the focus is such that jellyfish do not clearly distinguish small details, and see only large objects. Six eyes are located in the cluster holes on the sides of the bell.

The structure of the eye includes the retina, cornea, lens, iris. But, the eyes are not connected with the nervous system of the cube medus, so it is still not clear how they see it. 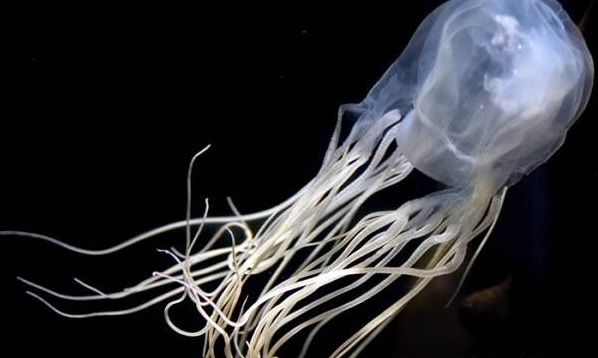 It is revealed that the Cubo-jellyfish have a pronounced hunting instinct. But other scientists are convinced that they are completely passive, and are just waiting for the victim in the water, touching the tentacles of what “got a hand”.

Their activity is confused with the usual movement, which they possess to a greater extent than other species, to a degree — cubed jellyfish can swim at a speed of up to 6 meters per minute.

The movement speed is achieved by reactive release of a jet of water through the subumbrellar space due to the contraction of the bell musculature. The direction of movement will be given by asymmetrically shortening rallyarium (fold of the bell edge).

In addition, one of the types of kubomeduz has special suction cups with which it can lock into tight bottom areas. Some species have phototaxis, that is, they can swim in the direction of light.

It is quite difficult to watch an adult kubomeduza, since they are almost transparent and try to swim away when a person approaches. Lead a rather secretive lifestyle. Hot days descend to the depth, and at night they rise to the surface. 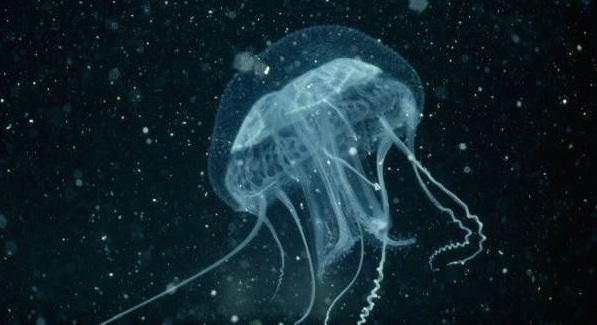 Although cubes are quite large — the dome is up to 30 cm in diameter, and the tentacles are up to 3 meters in length, it is not always possible to notice it in the water.

At the four corners of the dome are tentacles, separated from the base. The epidermis of these tentacles contains strestral cells, which are activated upon contact with certain substances on the skin of living individuals, and with their poison they kill the victim.

Toxins affect the nervous system, skin and heart muscle. With the same tentacles, the prey moves to the sumbrelian space, where the oral opening is located.

After that, the jellyfish takes a vertical position up or down the mouth and slowly absorbs food. Despite the daily activity, they eat cubed jelly preferably at night. Their food is small shrimps, zooplankton, small fish, polychaetes, bristle-jaws and other invertebrates.

In the photo burn from kubomedusa

Cubomedusa are an important link in the food chain of the coastal waters. It is known that vision plays its role during hunting and nutrition.

Like all jellyfish, cub jellyfish divide their lives into two cycles: the polyp stage and the jellyfish itself. Initially, the polyp sticks to the bottom substrates, where it lives, reproducing in a sexless way by budding.

In the process of such a residence, a metamorphosis occurs, and the polyp gradually divides. A larger part of it goes to life in water, and the remaining piece at the bottom dies.

For breeding kubomeduzy needed male and female, that is, fertilization occurs sexually. Most often outwardly. But some species prefer to do differently. For example, males of Carybdea sivickisi produce spermatophores (containers with sperm) and give them to females. 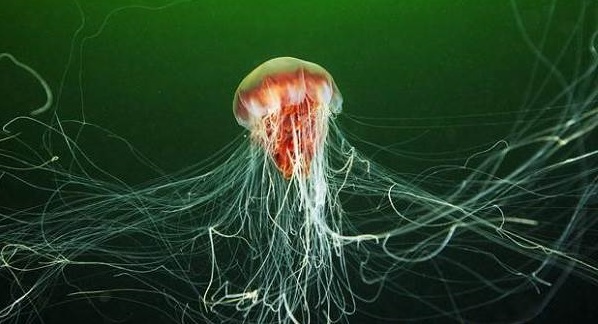 Females retain them in their intestinal cavity until they are needed for fertilization. Females of the species Carybdea rastoni themselves find and select the sperm secreted by the males, with which the eggs fertilize.

The eggs form a ciliary larva, which settles at the bottom and turns into a polyp. It is called a planula. There is also controversy about reproduction and life cycle. On the one hand, the “birth” of one polyp from only one jellyfish is interpreted as metamorphosis.

From which it follows that a polyp and a jellyfish are two stages of the ontogeny of a single creature. Another option is the formation of a jellyfish in the process of a form of reproduction, which scientists call monodisc strobilization. It is similar to polydisc strobilization of polyps at the origin of scyphoid jellyfish.

The nature of Cubo-jellyfish implies a very ancient origin. The oldest fossil remains are found near the city of Chicago and are estimated by scientists to be more than 300 million years old. Probably, their deadly weapons were designed to protect these fragile creatures from the giant inhabitants of the depths of that era.