Ophiuses (from an armor. Ophiuroidea) — the ground sea animals belonging to the type of echinoderms. Their second name — “serpenttails” is an exact translation from the Greek Ophiura (snake, tail). 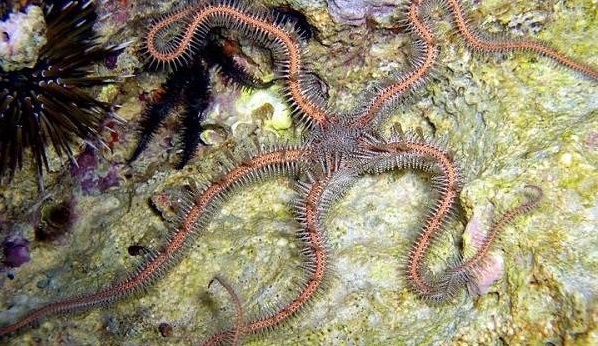 The animals received this name due to their mode of movement. They are moved along the bottom by long “arms”, which are separated from the body and twist like snakes. Ofiury — the class of echinoderms, which includes more than 2500 different species. The overwhelming majority of representatives live in tropical regions, where they feel very comfortable, and only about 120 types of sea ​​britters can be found in the depths of Russian waters.

The remains of these animals found by archaeologists belong to the second period of the Paleozoic era, and this is almost 500 million years ago. In the current classification, there are two main groups of Ophiuros:

Lifestyle of ofiura refers to the bottom. These are typical inhabitants of the deep sea, and the amplitude of distribution is quite large. Separate types of Brittle star  are also found in coastal zones, but mostly snake tails live at a depth of several thousand meters.

These abyssal species do not rise high to the surface, the deepest ones were found in the depths of more than 6,700 meters deep. The habitat of different species has its own differences: shallow-water members of the class have chosen coastal stones, coral reefs and algae sponges, and lovers of the deep-sea depths hide in silt.

Fully burrowing into the ground, leaving only the tips of its rays on the surface. Many species of brittle live with pleasure between the needles of sea urchins , in branches of coral or on sponges and algae. 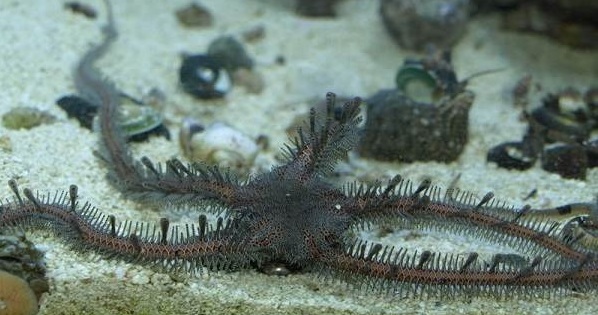 In places, there are huge clusters of ophiur, forming separate biocenoses occupying a dominant role in the life of marine communities. Such forms significantly affect the overall functioning of the aquatic system, as they eat a lot of organic substances, and, in turn, are food for other marine life.

Features of the structure of the office

In the photo Brittle star is similar to a starfish, but this similarity is limited only by some external signs. The internal structure and history of the development of these two species are significantly different. The evolution of the ophiuros was moving towards the development of rays, or «hands» of an animal, isolated from the main body. With the help of them, the seals of the ocean are very beautiful.

The central flat disk of a body in diameter does not exceed 10–12 cm, whereas the rays departing from it reach a length of up to 60 cm. The main difference between the ophiuros and other representatives of echinoderms is in the structure of these rays. 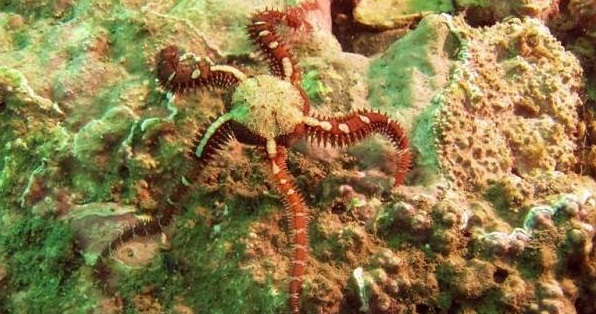 Usually there are five of them, but in some species the number can reach ten rays. They consist of a set of vertebrae, fastened together by muscle fibers, through which the «hands» are set in motion. Due to this segmented structure of the ophiur, the rays of some species are able to twist into a ball from the ventral side towards the main body.

The motion of the ophiur is jerky, with a pair of rays being thrown forward, which cling to the irregularities of the seabed and tighten the whole body. The vertebrae are outside protected by thin skeletal plates consisting of four rows.

The ventral plates serve as a cover for ambulacral grooves, the lateral plates are equipped with a multitude of needles having a different structure and appearance. The outer part of the skeleton is covered with microscopic lens scales. This is a kind of collective image of the eye. In the absence of visual organs, the shell itself, capable of responding to light changes, performs this function.

Unlike the starfish, ambulacral legs, emerging from the holes in each radial vertebra, do not have ampoules or suckers. They are assigned other functions: tactile and respiratory. Like the rays, the serpent disc completely covers skeletal plates in the form of scales. Often they are equipped with different needles, bumps or bristles. In the center of the ventral side there is a pentahedral mouth.

The shape of the mouth is dictated by the jaws — five triangular protrusions, provided with oral plates. The structure of the mouth and jaws allows the ophiuras not only to crush food, but also to capture and hold it.

Serpents feed on various marine organisms. Their diet contains worms, plankton, small marine organics, algae and soft tissue of corals. The rays of the aura and its legs are often involved in the capture, retention and supply of food to the mouth. 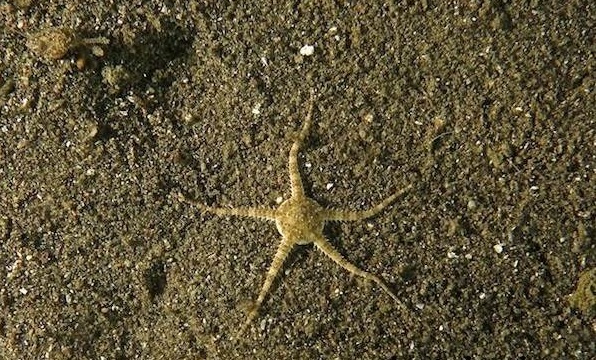 Small particles and bottom dendrite are attracted by ambulacral legs, while larger prey is captured by rays, which, twisting, bring food to the mouth. With the mouth, the intestinal canal of the echinoderm ophiur begins , consisting of:

When animals grind food with oral flakes, all rays are directed vertically upwards. Large communities of branched ophiuses use their “shaggy” rays to create peculiar traps into which small worms, crustaceans or jellyfish fall.

Such a carpet of branched rays easily captures and suspended marine feed (plankton). This method of nutrition refers to ofur to the mucous-ciliary filter feeders. There are echinoderms and carnivores. 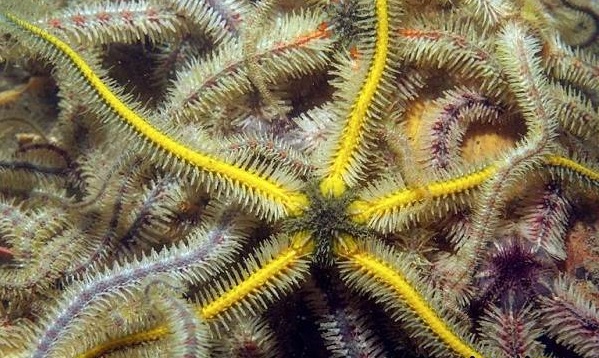 Some types of ophiuro, for example, black oiuru , can be kept in aquariums. They feed such pets with special dried sea compositions, but you can also pamper them with small pieces of fresh fish.

Reproduction and development of ofiury

The vast majority of snaketails are divided into female and male individuals, but there are several types of hermaphrodites. Among the variety of ofiur there are some species that multiply by transverse division.

Most often this occurs in small six-rayed echinoderms, the disc diameter of which does not exceed several millimeters. The disk is divided in such a way that there are always three beams with one part of the body. Over time, the missing «hands» are restored, but may be shorter in length.

The peak of reproduction of ofiur usually occurs in spring and summer. Rising at the tips of the rays, the animal releases into the water the sexual products, which are subsequently fertilized by males. 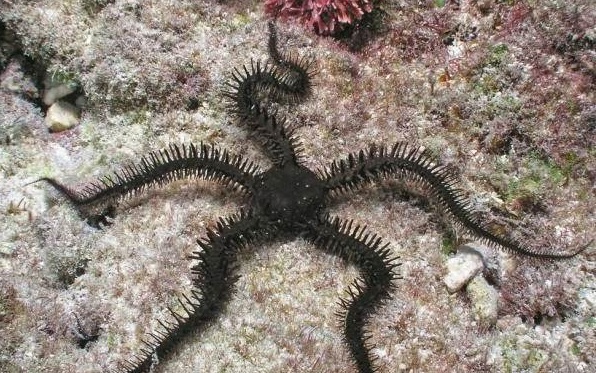 In the photo Brittle star

In the water, the eggs are fertilized and pass into the stage of the larva — ofiopluteus, which can be recognized by two symmetrical halves and long processes. This process takes on average three weeks, after which all further development of the larva to the adult individual occurs in the water. Ofioura sinks to the bottom when the developmental stage is completed and the young animal will be able to lead a bottom life.

But not all types of office splashes out sex cells into the water. Some echinoderms harbor young in themselves, or in special pouches — bursa, or in the ovaries. Through the holes in the bursa penetrates fresh water, and with it, and new sperm.

This feature allows one individual to bear in itself several generations of young stock. Ofiurs are capable of breeding on their own in the second year of life, although the marine animal reaches its final maturity only by 5-6 years of existence.