“A bear-toed is walking through the forest, picking up bumps, singing a song …” The brown bear is often mentioned in fairy tales, and in sayings, and in children’s songs. In folklore, he appears in the form of a good, ungainly dismissal, strong and simple. 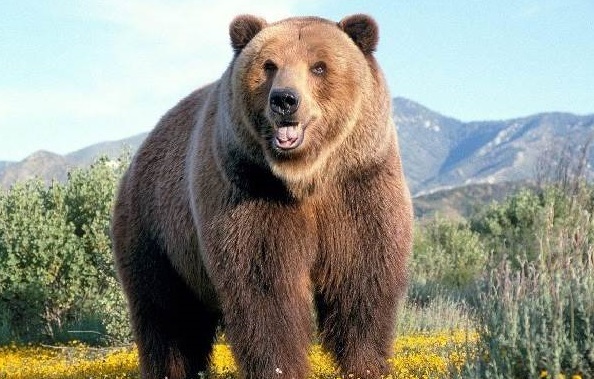 In a different light, it appears in heraldry: the image of a bear is decorated with many coats of arms and national flags. Here he is a symbol of strength, ferocity and power. «The master of the taiga» — so Siberians call him. And in this they are right, the brown bear is one of the largest land-based predators, an intelligent and merciless hunter.

Features and habitat of the brown bear

The brown bear (Ursus arctos) belongs to the bear family and is only inferior in size to its Arctic counterpart. The description of a brown bear should be begun with its unprecedented growth. 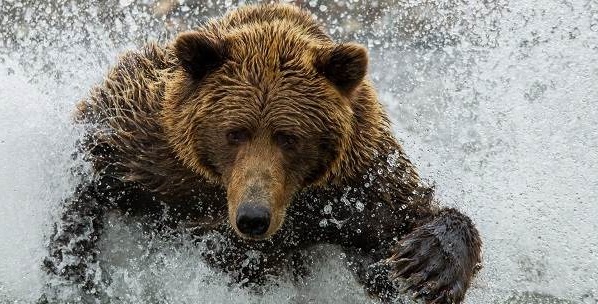 Our Kamchatka bears practically do not differ from them in size. The average length of a brown bear varies from 1.3-2.5 m, weight — 200-450 kg. As a rule, males are 1.5 times more powerful and heavier than females. The body of a forest warrior is covered with thick dense wool that protects it from pesky insects in the summer heat, and from the cold in the autumn-spring period.

Wool cover consists of short fluffy villi to keep warm and longer ones from moisture. Hair grows in such a way that in rainy weather the drops roll off the coat, almost without soaking it. Color — all shades of brown. Bears of different climatic zones differ: in some woolen cover is golden-fawn, while in others it is close to black. 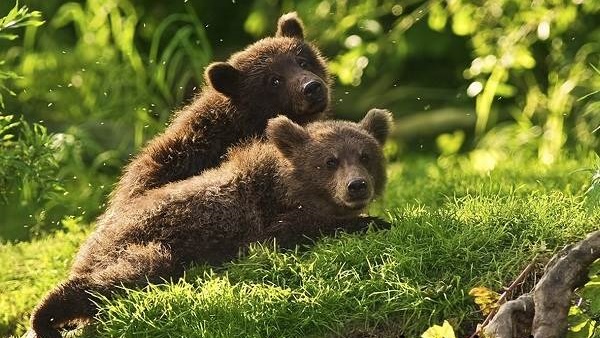 The bears that live in the Himalayas and the Rocky Mountains are distinguished by their light-colored hair near their backs; the inhabitants of Syria are for the most part red-brown. Our Russian bears have mostly brown color.

Bears are molted once a year: it starts in the spring during the rut, ends — before winter. Autumn moult is sluggish and unnoticeable, the fur is completely replaced shortly before occurring in the den.

In brown bears, a prominent hump is clearly visible in the photo — it is a mountain of muscles in the area of ​​the withers, which allows animals to easily dig the ground. It is the muscles of the upper back that give the bear a tremendous impact force.

The head is heavy, large, with a well-defined forehead and depression in the nose bridge. In brown bears, it is not so much elongated as in whites. Ears — small, as well as deep-set eyes. The mouth of the beast is equipped with 40 teeth, the canines and incisors are large, the rest are smaller (vegetarian). 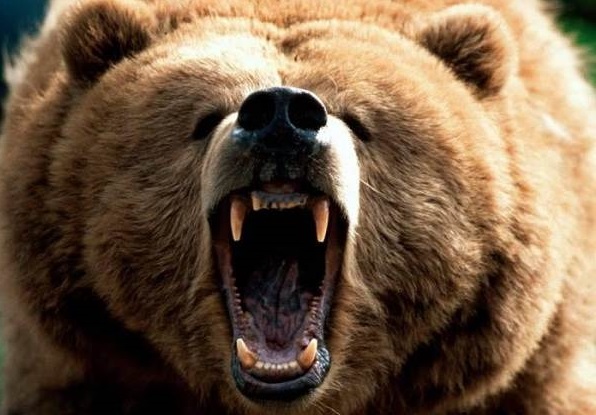 The power of the bite of a brown bear is monstrous. The special structure of the skull, the so-called sagittal ridge, provides more space for the development and attachment of the jaw muscles. Four bear fangs bite with a force of 81 atmosphere and are able to tear off huge chunks of flesh.

Paws — powerful and impressive. Each has 5 fingers and huge claws (up to 10 cm), which the bear cannot retract. The feet are covered with thick and rough skin, usually dark brown. Claws are not intended for hunting, they bear digs roots, tubers, bulbs, included in his diet. In addition to humans, only bears can walk straight, leaning on their hind limbs.

A peculiar gait, mentioned in no ten fairy tales, is explained by the fact that when walking, the bear moves alternately on both left paws, then on both right ones, and it seems as if it rolls from side to side. 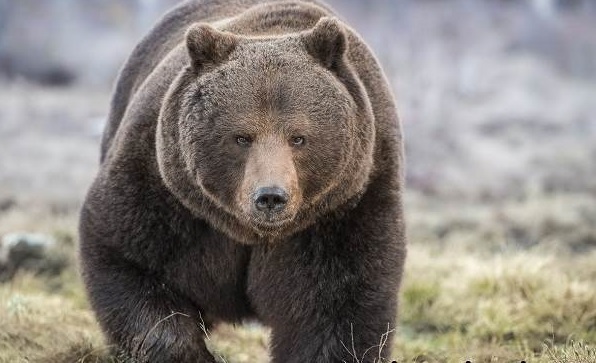 Of all the feelings, the bear is the weakest sight, hearing is better, but the sense of smell is excellent (100 times better than human). The bear is able to smell the honey 8 km from the hive and hear the buzz of a bee swarm for 5 km.

The areas where the brown bear lives are huge. They inhabit almost all of Eurasia and North America, excluding southern areas. Everywhere these animals are considered to be quite rare, there are large populations in the northern states of the United States, in Canada, and of course, in Siberia and the Far East.

Brown bear is an animal of the forest. They prefer impassable thickets of taiga forests with peaty marshy areas and small rivers. In the rocky areas, clubfoot live under the canopy of mixed forests, near canyons and mountain streams. 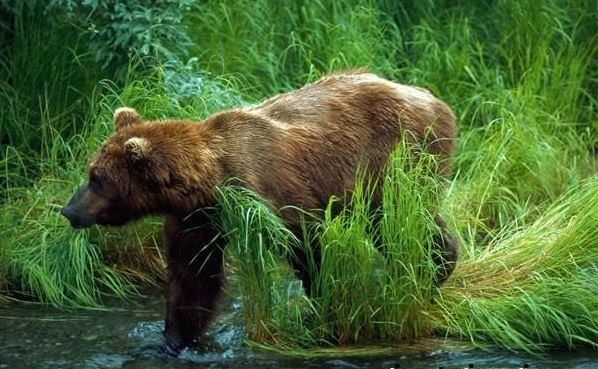 Depending on the habitat, scientists identify several subspecies of the brown bear, differing by and large only in size and color. Not everyone knows that a grizzly bear is not a separate species, but only a variant of the brown one that lives in the expanses of North America. What is characteristic, the closer to the pole, the bigger the brown bears. This is easily explained — in harsh conditions it is easier for massive animals to retain heat.

Character and way of life of a brown bear

Brown bears are territorial loners. The land of the male can be up to 400 km², the females with offspring are 7 times smaller. Each bear marks the boundaries of its possessions with odorous marks and scratches on the trunks of trees. Animals lead a sedentary life, wandering only in the direction of the area with more accessible and abundant food, or away from humans.

One of the characteristic features in the behavior of a bear is its persistence. Obstinacy is manifested in the production of large quantities of food, and for the sake of a piece of delicacy. 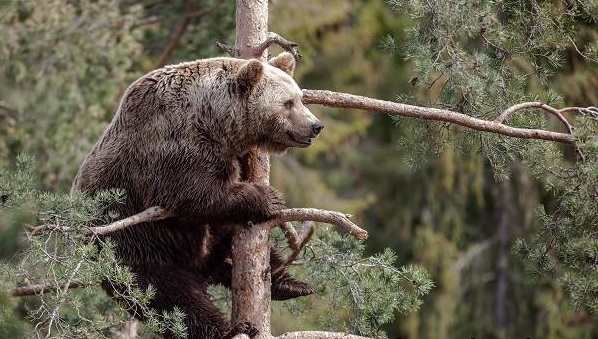 So, in late autumn, when a lonely fruit is hanging on an apple tree, the bear will first try to reach out, then it will try to climb, and if it fails on flexible branches, it will begin to shake the tree until it takes hold of the apple.

Another feature of bears is a wonderful memory. They are easy to learn, especially at a young age, and incredibly intelligent. Many hunters note that bears, who had previously seen the trap and his work, throw large stones or sticks at him, and having neutralized them, they eat the bait 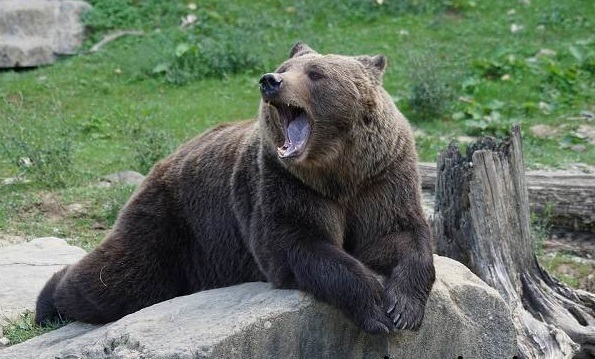 Bears are very curious, but they try to avoid meetings with a person. But if this happens, the behavior of the beast depends largely on when he noticed the person and who he was before. He can watch people picking berries or mushrooms, and then appear in all its glory, irritated by someone’s loud cry or laugh. After that, he usually makes a small but sharp leap forward, snorts with displeasure, but does not attack.

After a minute, the owner of the forest turns around and slowly walks away, looking around and stopping several times. A quick mood change for bears is the norm. Another example is when a bear meets a person at random and suddenly. Frightened, the bear, as a rule, empties the intestines. That’s where the name of the disease «bear disease» came from. 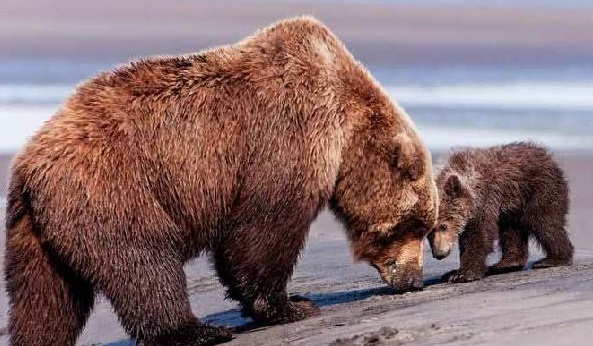 It’s no secret that brown bears hibernate. Before wintering, they are especially actively fed to accumulate enough fat. The weight of the brown bear in the autumn at times by 20%. Going to the place of the lair (depression, littered with a windbreak or a secluded place under the roots of a fallen tree), the bear winds, tangling traces.

In anabiosis, the bear lasts from 2.5 to 6 months depending on the area of ​​habitat and climatic indicators. In a dream, the body temperature is kept at 34 ° C. Males and females awaiting offspring sleep separately. Bears with teddy bears-first years — lie down together. Paw suck peculiar only for kids. 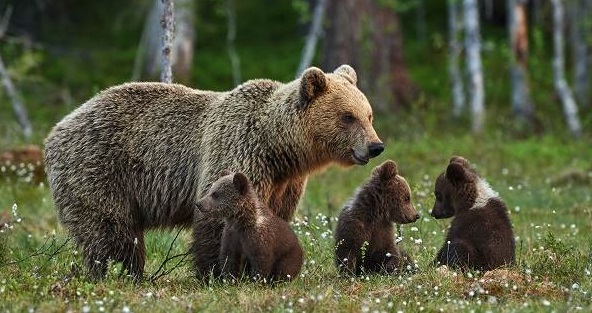 In the photo is a brown bear with cubs.

Bear sleep — very sensitive. If you wake him up in the middle of winter, he will no longer be able to fall asleep and will wander through the snowy forest, scarce for food, angry and irritated. The worst thing is to meet a bear-rod. Unlike another time, he will surely attack. During the hibernation period, the weight of the brown bear is reduced by an average of 80 kg.

Brown bears eat everything. In their diet there are various roots, berries, bulbs, young shoots of trees. The plant component is 75% of the diet of clubfoot. They visit orchards, fields of corn, oats and other cereals. They catch insects: beetles, butterflies, ruining anthills. On occasion, brown bears hunt lizards, frogs, small rodents, and fish. 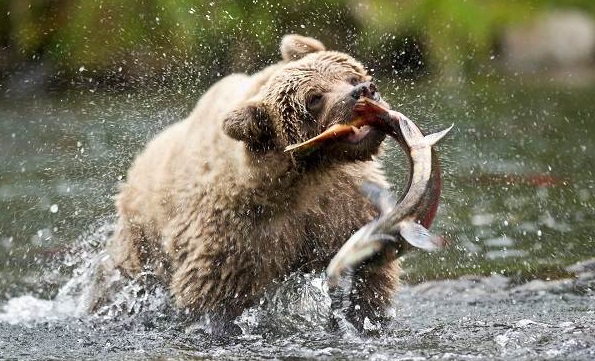 Often bears are observed near rivers during the salmon run. They swim well and skillfully catch fish going to spawn. Carrion is another source of food. And although hunting is not a food strategy for brown bears, they can attack deer, roe deer and even moose. They are especially active at twilight time — before dawn or late in the evening, although they can wander through the woods and on a white day. 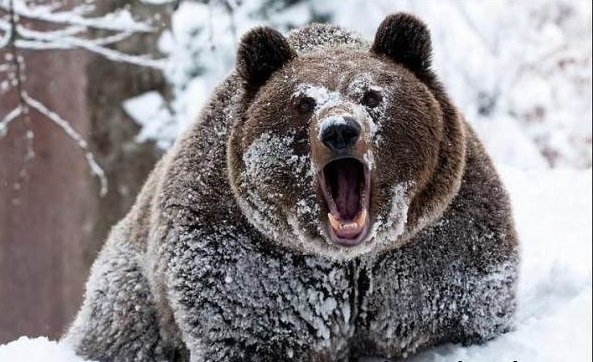 Reproduction and lifespan of a brown bear

Bears bring offspring with an interval of 2-4 years. The current begins in May and can last from 10 days to a month. Male bears during this period are characterized by a loud and booming roar and aggressive behavior. Fighting between rivals is a frequent phenomenon and often ends with the death of one of the bears.

The bear is in a state of pregnancy for about 200 days. Embryo development occurs only when it goes into hibernation. Bear cubs (usually 2-3) are born in a den in the middle of winter, deaf, blind and poorly pubescent. Only after 2 weeks they begin to hear, after a month — to see. The weight of a newborn is about 0.5 kg, length — 20-23 cm. 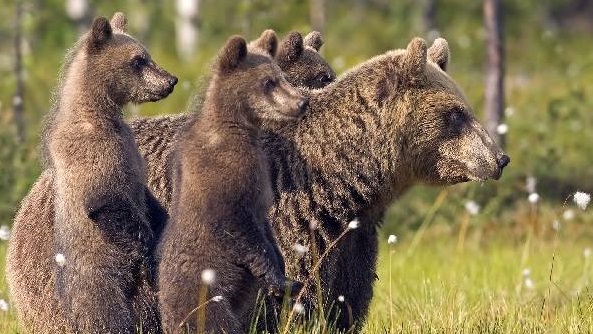 It is surprising how much the maternal instinct differs when it is in the den and after it is released from there. If a bear is woken up, she will leave her lair and insensible defenseless babies and never return to this place.

Mother feeds cubs for about 120 days, then they switch to plant food. Bear milk is 4 times more nutritious than cow milk. Often, bear cubs from the past offspring take care of their younger brothers, look after them and try to guard. You can definitely say about a brown bear: the father is none.

By the age of 3, young bears are capable of sex and finally say goodbye to their mother. They will grow another 7-8 years. Life expectancy in the forest is about 30 years, in captivity — up to 50. 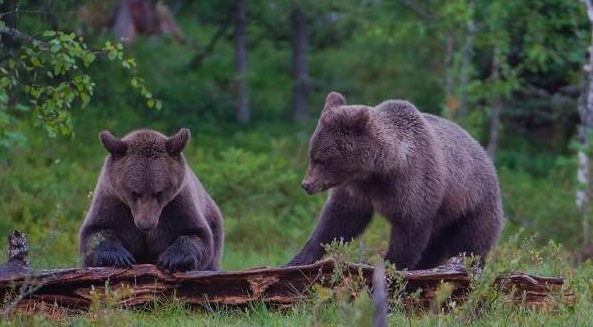 In the Red Book, the brown bear appears as a “threatened species”. On the planet, among impassable forests, about 200 thousand individuals live, 120 thousand of them in the territory of the Russian Federation.

In their class, brown bears are one of the most majestic and powerful animals, but like other representatives of the world fauna, they are completely defenseless against humans. Being the subject of hunting in order to obtain hides, meat and bile, they are mercilessly exterminated today.