People are accustomed to consider some creatures to be cute, beautiful and safe for themselves. For example, butterflies . The mention of them causes a beautiful air image in the head, a sea of ​​flowers, and it is they who flutter in the stomach of lovers. But among them there are not very romantic creatures, but the butterfly is a dead head . 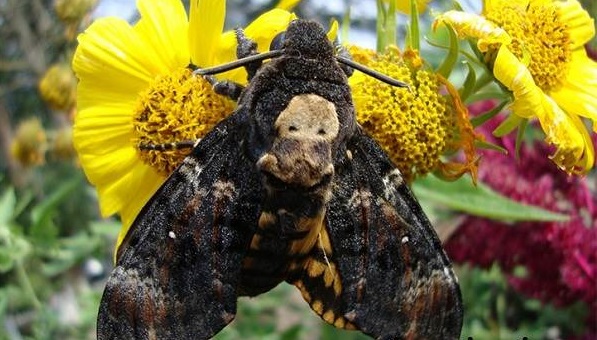 Description and appearance of the butterfly dead head

This species belongs to the family of hawk moths . Large individuals with a wingspan of up to 13 cm. This is one of the largest butterflies in Russia and Europe. Front wing 40-50 mm long. (up to 70 mm.). The wing span of the males is slightly smaller than that of the females.

The rest of sexual dimorphism is weak. The front wings are narrow, pointed, with a smooth outer edge. Hind wings shorter, 1.5 times longer than wide, sloped towards the rear edge and have a slight depression.

The wings are painted differently, and the pattern and color intensity are different. Most often, the front wings can be divided into three different fields, and the rear ones are mostly yellow. 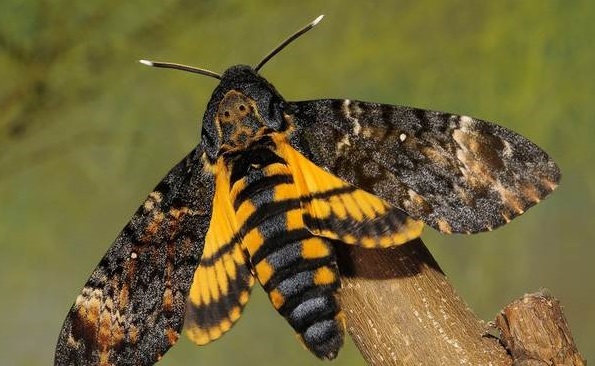 Weight of hawk moth hawk from 2 to 8 grams. Females are larger than males. Their head is almost black or with brown spots. The chest is black with a sand-colored pattern. The pattern may be different.

Describing a dead head to a butterfly , you should definitely say that this drawing most often resembles an image of a skull with bones. It was this color that became the reason to call it a lepidoptera.

Different species are painted a little differently, but the outlines of the skull are most often present, which is clearly seen in the photo of the butterfly, the dead head . Abdomen up to 6 cm long, about 2 cm in diameter. 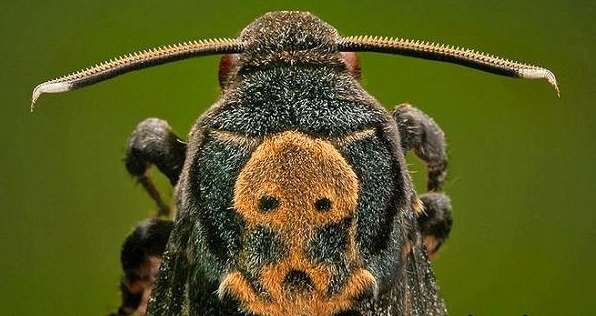 In males, its end is pointed, in females it is more rounded. Chest and abdomen ocher black. The last 2-3 segments in males are completely black, in females one segment is black. Eyes bare, round. The proboscis of this butterfly is thick, about 14 mm in length. Antennae are also rather short, legs are short and thick.

The habitat of the butterfly is a dead head depending on the season, as it is a migratory species. The dead head resides in the southern regions from May to September. North Africa is considered the homeland, and the current population is periodically replenished by individuals migrating from the southern regions.

Migrating butterflies can reach a flight speed of up to 50 km / h. The global range includes Africa and the west of the Palaearctic. The butterfly is distributed in the tropics and subtropics of the Old World, in the east to Turkmenistan. Flies to the Middle Urals and the North-East of Kazakhstan. 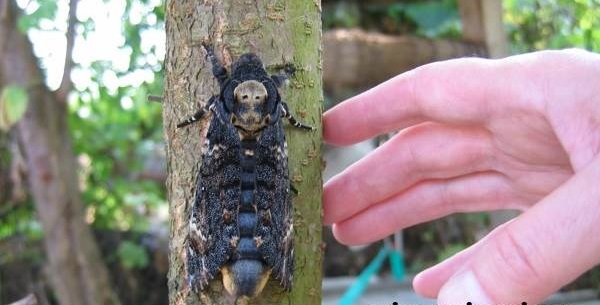 It lives in southern and central Europe, the Middle East, Syria, Iran, Turkey, Madagascar. Rarely found on the peninsula of Crimea, in Abkhazia, Armenia, Georgia. We found this species in many regions of our country: Volgograd, Saratov, Penza, Moscow, in the Krasnodar Territory and in the North Caucasus, where they are most often found in foothill areas.

The habitat of a butterfly is diverse, but most often it prefers to live near cultivated fields, plantations, in the valleys. It prefers warmed areas.

The dead head is a moth . She is resting during the day, and when twilight descends, she goes hunting. Until midnight, these large butterflies can be seen in lighted areas, attracted by the light of the pillars and lamps. Sometimes you can see the marriage dances of adult butterflies , when they whirl beautifully in separate sheaves of bright light. 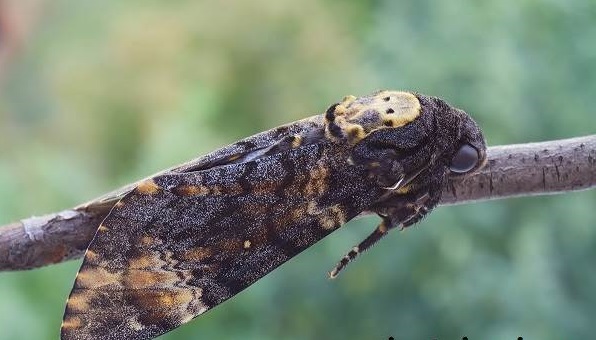 The butterfly is a dead head can make sounds

In addition to the frightening appearance, this lepidoptera can emit a shrill squeak. It is not entirely clear how they do it. Presumably, the sound comes out of the stomach. External devices not found. In any state — be it a doll, a caterpillar or an adult butterfly, the dead head can squeak. Voices in different age periods are also different.

At the stage of the caterpillar hawk rarely comes to the surface, most of the time it spends underground. Sometimes the larva does not even come out of the ground completely, but only sticks out a part of the body, reaches out to the nearest greenery, dines and hides back. The caterpillar lives at a depth of 40 cm. In this state, it spends about two months, then pupates. 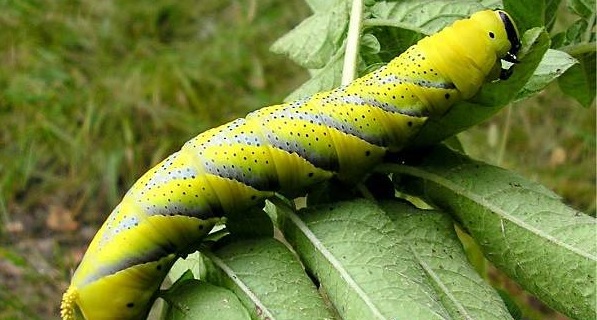 One of the reasons why people do not like hawk mink is that caterpillars eat tops of cultivated plants. They are especially fond of the nightshade (for example, potatoes, tomato, eggplant, physalis).

They also feed on carrots, beets, turnips and other root crops. Also caterpillars eat bark and some herbaceous plants. During the fruiting of shrubs in the gardens, they cause them significant harm by eating the young foliage.

Butterflies are seen in a special love for sweets — they often visit the apiary where they climb right into the hives. So that the bees do not attack the butterfly, it emits special substances that do not give out a stranger in it.

In addition, it is assumed that the body pattern resembles the bees of their uterus, so they do not prevent the appearance of hawk moths at home. The butterfly runs its thick proboscis into honeycombs and sucks out about 10 grams of honey at a time. 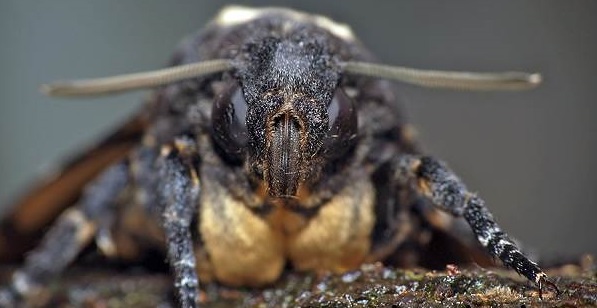 Well, if you really got a thief, then a dense hair cover will protect it from bites. The beekeepers, on the other hand, learned to protect the hives by installing a grid with a small cell around them. Bees and drones easily pass into the holes, and plump hawk moths will not be able to get into the hive.

Butterflies also feed on nectar of flowers, sap of trees, berries and fruits. They cannot penetrate many fruits, and feed only on those that are already damaged and from which fluid flows. During dinner, the butterfly’s dead head does not hang in the air, but sits next to the «plate», unlike other types of hawk moths.

The reproduction and lifespan of a butterfly is a dead head

An interesting fact about the butterfly dead head is that the second generation of females is sterile, and only a new wave of migrants can fill up the population. Each year, hawk moths give two offspring. If the year was warm, then a third could be displayed. But, if autumn is cold, some caterpillars do not have time to pupate and die.

Females attract males with pheromones, mating and laying eggs. The eggs of these butterflies are bluish or greenish, 1.2-1.5 mm in size. Their butterfly sticks to the underside of the forage leaves, hides in the sinuses between the leaf and the trunk. 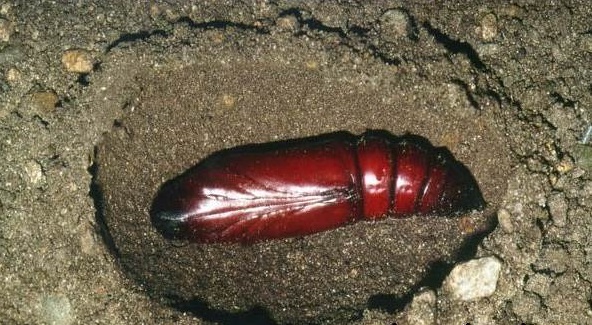 In the photo the larva butterfly dead head

Unfortunately, the beautiful butterfly is surrounded by some myths and legends, strange meanings that do not honor her. It was believed that if this butterfly appeared next to you, then a close person will die, and in order to prevent this, it is necessary to destroy evil. The scales were wings flakes that deprived a person of sight, as well as blamed for spreading terrible epidemics.

Now all these beliefs are in the past, and in many countries the butterfly is listed in the Red Book . Life expectancy depends on the nutrients accumulated by the larva, usually the adult dead head lives from several days to a month.