Features and habitat of sea otters 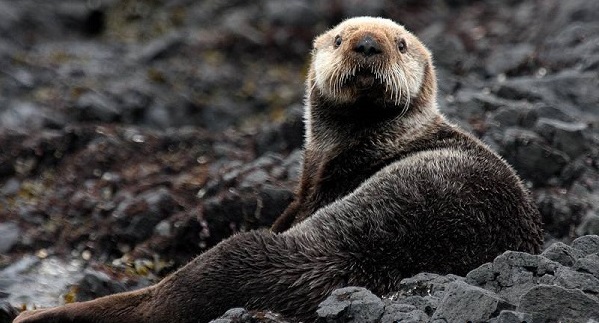 As seen in the photo of a sea otter , this is a medium sized animal with a slightly flattened muzzle and a round head.

Usually sea otters , being considered as small ocean mammals, have a body length of about one and a half meters, yielding in size to fur seals, walruses and seals .

Male ryans, which are somewhat larger than females, reach a mass of not more than 45 kg. Almost a third of the animal’s body length (about 30 centimeters or a bit more) is the tail. 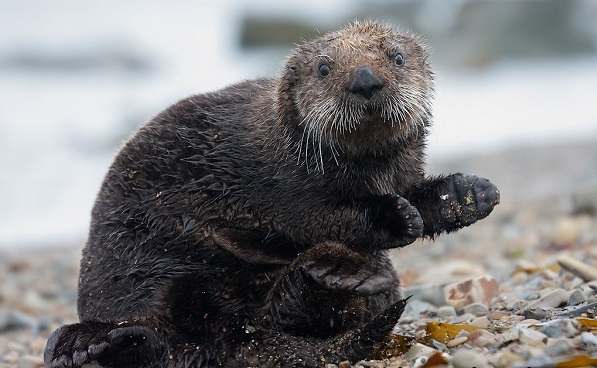 The black and large nose is particularly prominent on the face, but the eyes are very small, and the ears are so small that they look completely inconspicuous on the head of these creatures.

Giving a description of a calan , it should be mentioned that above the surface of the coat of the nasal region of the animal are large vibrissae — hard hair, which nature has endowed many mammals as organs of touch.

The colors of the animals are light and dark, varying in shades, from red to brown. It is also interesting to note that there are absolutely black individuals — melanists and completely white — albinos. 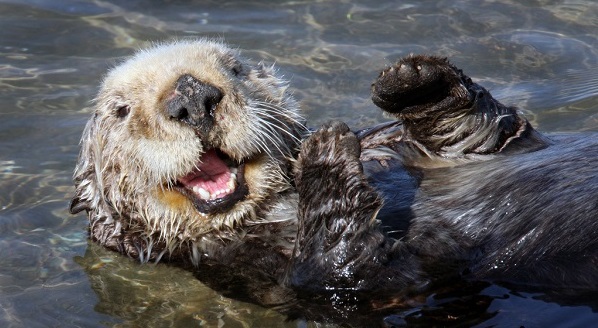 Dense and thick fur rye, consisting of two types of hair: fur and awning, allows animals not to freeze in cold water. In summer, the old wool falls out particularly intensively, although it is changed year-round, which is a distinctive feature of these marine animals.

Kalan carefully cares for his fur, and he serves him as a good defense against the not very comfortable conditions of the outside world, to which nature helped the animal to adapt. The favorite habitat of sea otters is ocean water. On the shore, they go out only occasionally to dry a little. 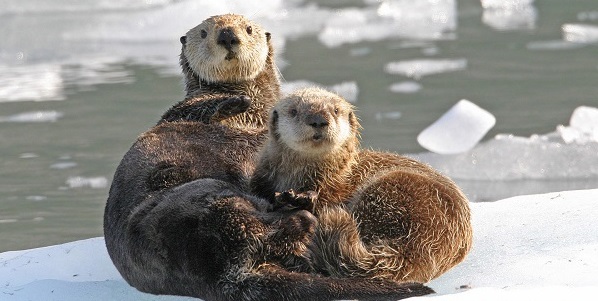 However, it all depends on the habitat. For example, Kalans living in California prefer day and night to be in the water. And the inhabitants of the Copper Island, which is one of the corners of Kamchatka, even go to sleep on dry land.

Equally important are the weather conditions. In a storm the sea ​​ryan does not dare to swim close to the shore. The appearance of the front and rear extremities of the animal has significant differences. The paws of the animals are short in front and have long fingers that these creatures need to capture prey and, like vibrissae, serve as organs of touch. 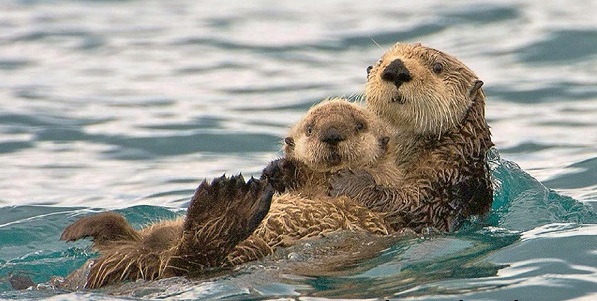 In the photo the rye with a calf

The designation of elongated hind, flipper-like fins with coalescent fingers, is completely different to the extremities, they help creatures to swim and dive perfectly. Such animals live not only off the coast of California, and are especially numerous in Washington state, Alaska, off the coast of Canada in British Columbia. In Russia, these animals are found mainly in the Far East and, as already mentioned, on the islands of the Kamchatka Territory.

Sea otter sea otter is related by the zunologists to the martens, being the largest representative of this family. Approximately two or three centuries ago, the population of these animals, according to scientists, was much more numerous and reached sizes of up to several millions of individuals who inhabited the entire vast coast of the Pacific Ocean. 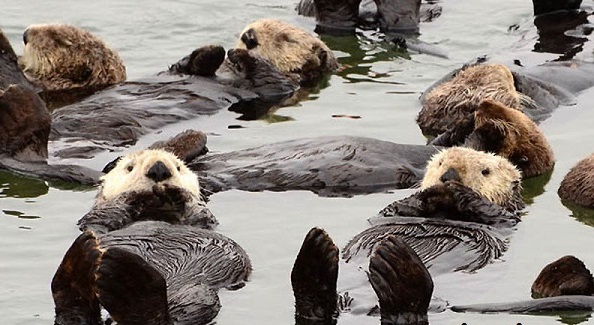 However, in the last century, due to the mass destruction of animals, their position has deteriorated significantly, which is why they were taken under protection, as noted in the Red Book . The otters settled in their former habitats, besides other conservation measures were taken, and hunting of these animals was also prohibited.

As a result of such measures, the population size increased slightly, but the habitat is still sparse. Currently, sea otters are divided by scientists into three subspecies. Among them are the Northern Calan , Californian and Asian or ordinary.

The nature and lifestyle of the sea otter

They are quite peace-loving, friendly animals, belonging without aggression, both to their relatives and other representatives of animal fauna, and to humans. 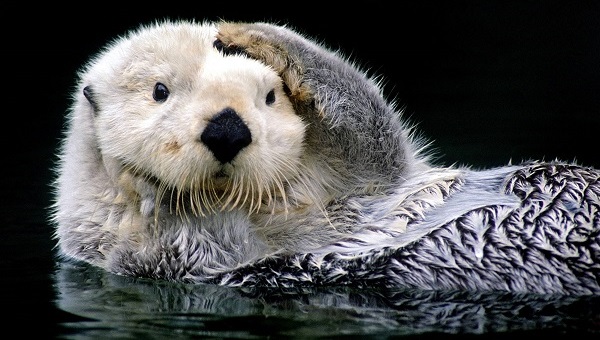 Such gullibility was one of the reasons for the extermination of these creatures, which did not show any alertness even in dangerous situations and allowed hunters to approach them at close range. Under normal conditions, ryans prefer to live in small groups, less often spend their days alone.

If a novice wishes to join the community of sea otters, he is accepted affably, and whoever decides to leave the group, usually no one interferes. The number of communities of sea otters varies, and single members of both sexes as well as young animals can become its members. 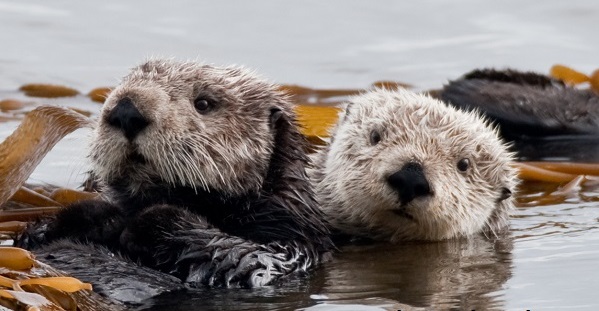 Usually, members of such groups spend time together only during the holidays, gathering in certain places, for example, in seaweed thickets. The otter does not particularly like traveling , but if some individuals travel long distances, then only the males.

The intelligence of animals is developed quite well. Active time of day for them is the day. Having risen early in the morning, the animal sea otter immediately proceeds to search for food and makes the toilet, bringing its wool in full order.

It is important for otters to take care of their own fur, which they thoroughly clean and brush daily, freeing hair from mucus and food, in addition, in this way they help the wool not to get wet completely, which is necessary to avoid hypothermia of their whole body. 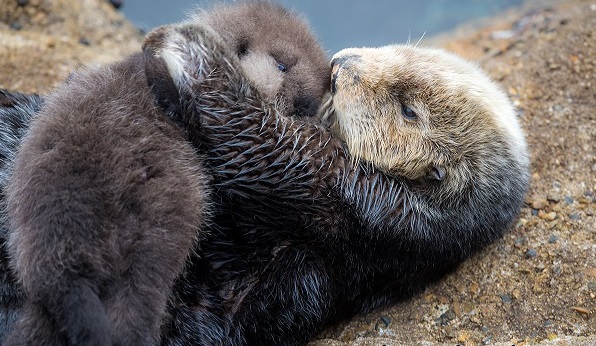 At noon, according to the daily routine, the animals begin a short day rest. The second half of the day kalans again devote to communication and games, among which a special place is given to lovemaking and caressing. Then again, rest and chat. At night, the animals sleep.

In calm, calm weather, sea otters in search of food can move far from the shore. Getting their food, they dive to great depths and stay under water for up to 40 seconds. And having found suitable food in the ocean depths, they do not eat their prey immediately, but gather in special folds the skins, which in appearance resemble pockets located under the left and right paws. 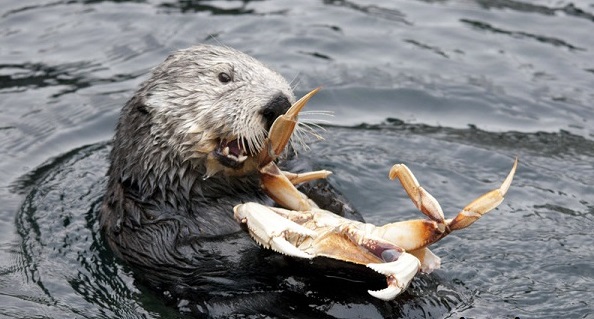 An active lifestyle in cold waters causes the animals to eat a significant amount of food. Thus, it turns out that per day they are forced to absorb nutrients up to 25% of their own weight. Their needs and tastes correspond to living creatures, which include four dozen species of oceanic organisms.

Among them are starfish and ears, many species of fish. Crabs , clams , scallops, chitons, mussels and sea ​​urchins can become their delicacy . Northern ryans actively feed on octopuses , but from all the organs of these living creatures only the tentacles eat. 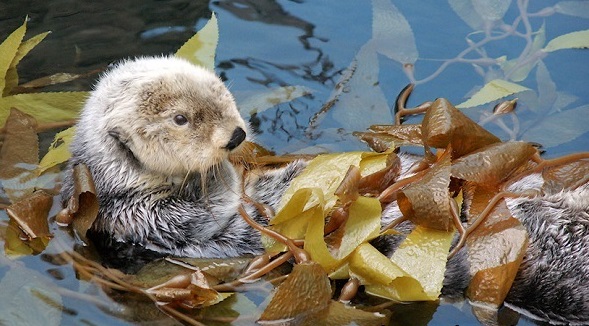 Emerging from the water after a successful hunt, the animals break into the meal. They are so smart that, when opening mollusks, they use stones that are found on the ocean floor, while folding prey onto their bellies and hitting with heavy objects.

Often, such devices are kept in the folds of the hide and are used for the same purpose another time. In the pockets of the animal and carry food stocks left over from too heavy a meal. And after eating, clean creatures must thoroughly clean their hair. Sea ryans quench their thirst with seawater, and their kidneys are well suited for processing so much salt.

Reproduction and lifespan of the sea otter

Among the games in the communication of the animals described, marriage flirting occupies a special place, while the males swim and dive with their chosen one for a long time. 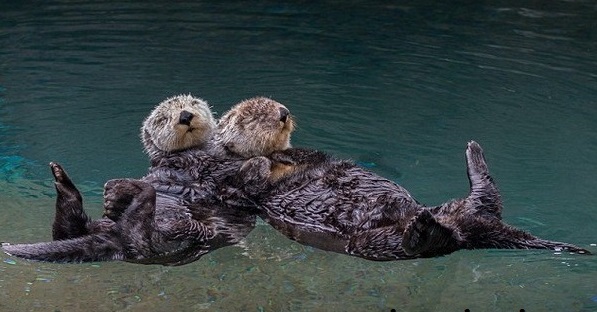 Courtship lasts all year round, there is no clearly established breeding period for these animals, and mating, possible after individuals reach the age of five, occurs constantly and at any time. True, in some areas where animals live, active mating rituals are given precisely the spring period.

During the games, the gentlemen seize their girlfriends by the noses, thus keeping them together during intercourse. Unfortunately, such treatment often leads to sad troubles. After mating, partners stay with their chosen ones for no more than six days, after which they leave, not interested in posterity and not taking part in upbringing. And their girlfriends, after seven or eight months pregnant, go to give birth on dry land, soon giving birth to one baby.

If there are twins, then, as a rule, only one of the newborns survives. The second one has chances if it is adopted by some unlucky mother, who lost her offspring for various reasons. Toddlers are born helpless and the first months are not able to live, developing without maternal care.

Females carry their children on their stomachs, not leaving them to fend for themselves and releasing only for a short period to feed in the water or on the shore. So caring mothers Kalyan teach babies to eat and hunt. Kids begin to try solid food after a month, not earlier.

In addition, females actively play with their children, caressing them and throwing them up, treating them with affection and love, and if necessary, selflessly protect their offspring, risking themselves. 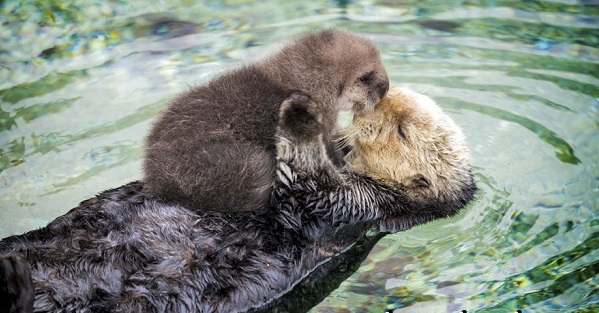 Under normal conditions, ryans live for no more than eleven years, although there are also long-livers able to exist for almost a quarter of a century. But in captivity, these animals live much longer, having the opportunity to prosper in complete health for a couple of decades.