Our planet is rich in various species of flora and fauna. About 73 thousand living creatures belong to crustaceans. 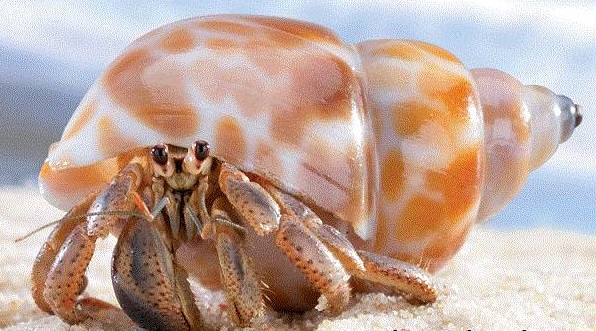 You can meet them in all waters of the planet. Rivers, lakes, seas and, of course, the oceans are their favorite places. Such a variety has not yet been sufficiently studied by ichthyologists. The brightest representatives of this species are lobster crayfish, praying mantises and hermit crabs.

Crustaceans are a huge group of arthropod animals. Crabs, shrimps, crayfish and crayfish mastered almost all types of water bodies on the planet.

Most of them are actively moving on the surface, but there are also fixed representatives of them, for example, sea ducks and sea acorns. 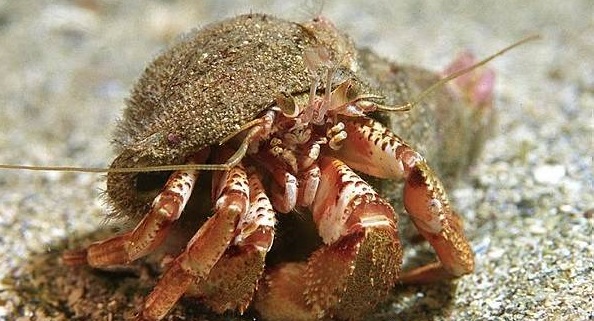 Of all the representatives of crustaceans, not all are marine inhabitants. Crabs and scolopendra, for example, are much more comfortable on land than in water.

There are some types of hermit crab that spend most of their lives on land and only return to the sea during reproduction.

Features and habitat of hermit crab

You can meet sea hermit crab in the Baltic, Northern, Mediterranean seas, near the islands of the Caribbean Sea and on the coasts of Europe. Basically, these creatures prefer to dwell in shallow water, only some of them can climb to a depth of 70-90 meters. 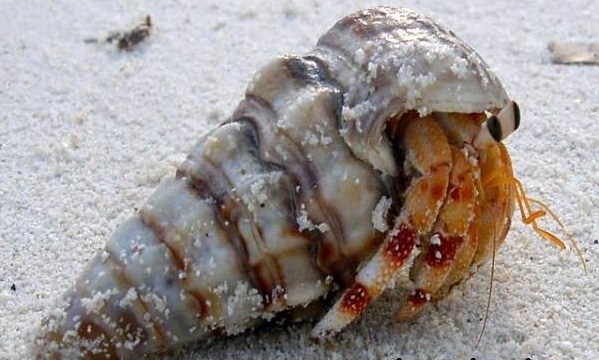 In the photo is a hermit crab

Quite strange is the sight for the observer, who sees how along the smooth folds of sand at the bottom of the sea the snail moves with incredible speed, which is rather unusual for it. And only after pulling out this snail can you find a reasonable explanation for this quick movement.

The thing is that this is not a snail at all, as it is initially shown to everyone, but a shell of a hermit crab, which he found abandoned at the bottom and uses for his own safety.

Peering to the bottom more closely, you can see a huge number of such shells with hermit crabs inside, both very small with a pea, and large with a fist. 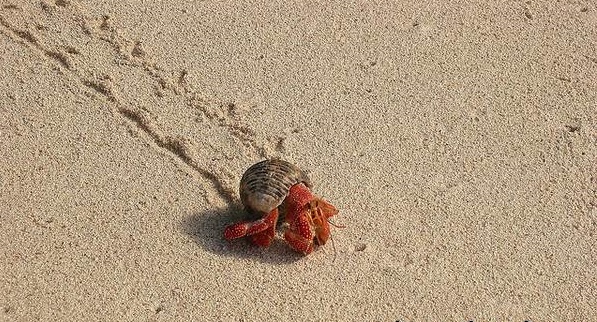 In the photo of a hermit’s cancer, one can see three pairs of limbs peeking out of the cockleshell from under his house, as well as claws. The left claw is usually used by the hermit crab to hunt, and the right claw protects the entrance to the shell.

During the evolution, the hind pair of legs has become significantly shorter. These hind limbs help the cancer to keep its house on the move. In nature, there are a huge number of species of hermit crabs, they have common similarities that help to distinguish them from all other crustaceans. Their front part is covered with chitinous shell, and the long, soft abdomen has absolutely no hard protective coating. 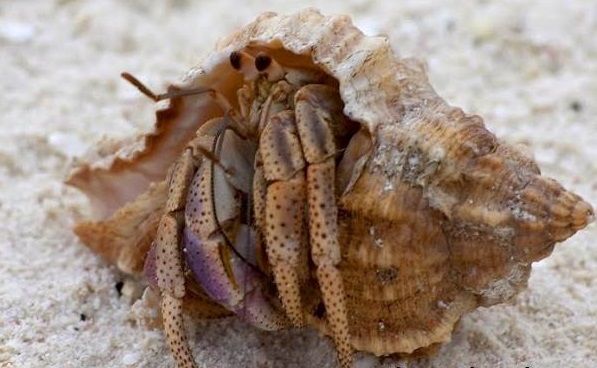 To protect this soft part of the body, a hermit crab must search for a shell by its parameters. If you pull him out of this shelter by force, he will behave very restlessly. Why does the hermit cancer not part with the shell? She protects him not only during the attack on him, but during the hunt. Over time, it grows from a shell.

He has to find and select for himself a bigger and more accommodative home. Interesting facts about hermit crabs say that for their protective house they can use shells of about 25 species of gastropods.

They mostly prefer roomy and light shells. But in the absence of such, they can settle in an not-quite-comfortable shell or even in a piece of bamboo in order to feel protected from external factors and potential enemies. 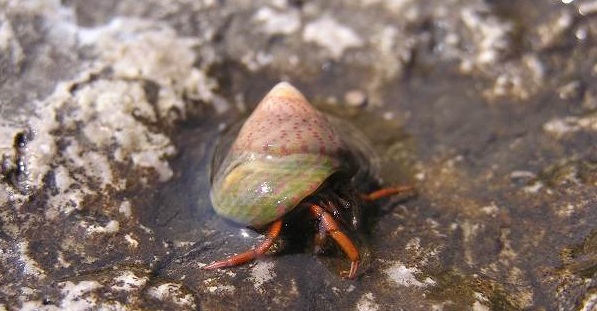 There have been cases when, after looking closely at their fellow crayfish, they notice that their sink does not quite fit them in size. By tapping, cancer offers an exchange. Sometimes it happens, but sometimes the hermit crab refuses the offer. Failure is manifested by closing the claws of the entrance to the shell.

Quite an interesting tandem are hermit crab and sea anemone. For greater protection, the crayfish plant actinia on their left claws and so along with it move on the seabed. At the moment when the claw closes the entrance to the sink, the sea anemone remains inside and guards the entrance. 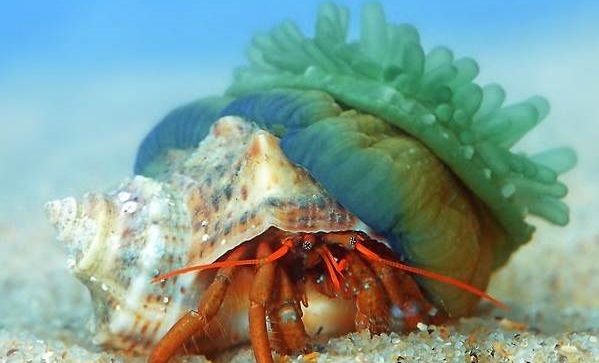 In the photo the hermit crab and actinium

For anemone, it is very convenient, therefore, to quickly move across the seabed and get food or eat it after cancer. This symbiosis of hermit cancer benefits both for him and for sea anemone. It perfectly protects cancer from enemies with its poisonous tentacles, the same in turn acts as its convenient means of transportation.

If it is necessary to replace the shell, cancer carefully transfers actinium to its new home. If it so happens that the dwelling has not yet been found, he settles his neighbor right on his body.

The nature and lifestyle of hermit crab

In general, they are quite peace-loving creatures. But there are sometimes conflicts between them. Most often they occur because of a cozy living space. It sometimes even comes to a fight. 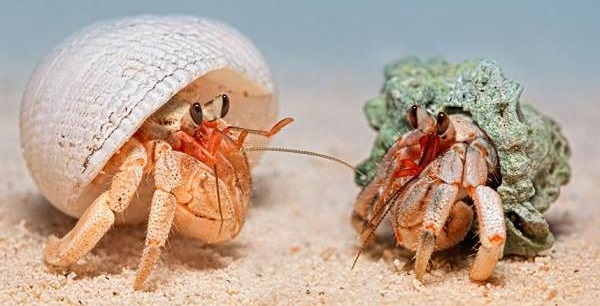 With regard to the relationship of hermit cancer and anemone, between them there is always peace and friendship. Favorable neighborhood for both brings its beneficial results. These are typical inhabitants of shallow waters. In tropical and subtropical waters, there are those types of hermit crabs that prefer depths.

But not for all hermits favorite water habitat. Krudasan Island, located in the Indian Ocean, is rich in land hermit crabs. Almost all their lives they spend on land. The whole coastal zone of this territory is dotted with their tracks, which very much resemble the track of a crawler tractor in a miniature form.

A hermit crab called a palm thief or “coconut crab” is said to be a very powerful crustacean that can claw evenly bite off a finger with a claw. 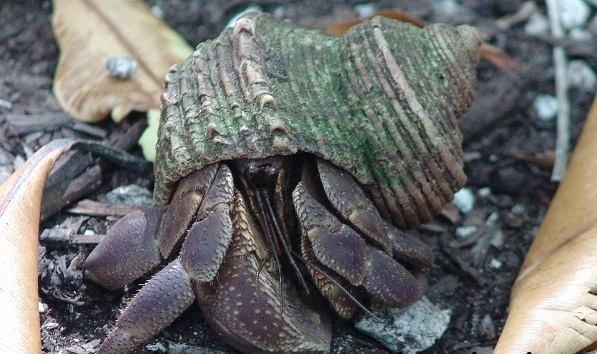 In the photo the hermit crab is a palm thief

Young crayfish, hermits of this species live in water in the shell of some mollusk. After one of the molts, the already more adult creature drops the shell and goes to the land.

With subsequent molts, the cancer body is shortened and bend under the breast. It is large and strong cancer, reaching up to 3 kg of weight. Some representatives of this species in order to hide from the possible danger of using mink, which is pulled out independently.

There have been cases when for these purposes crayfish used plastic bottles or glass bottles with a wide neck, which end up on the seabed thanks to people. It is not quite easy for hermit crabs to move with a shell, but this does not prevent them from being predators. Basically, they lead a reclusive life, from which the name comes from the crayfish. 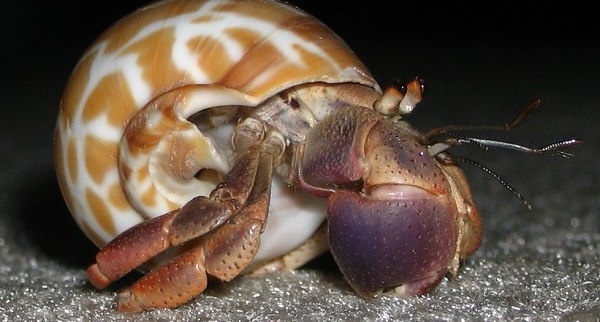 There is simply a huge number of species of hermit crabs. They differ in some of their features, but in general, the structure of hermit crabs is completely identical, so they are easy to classify.

You can distinguish them mainly in color and habitat. There are, for example, the hermit crab Mexican red-legged, orange-striped, steppe cancer, blue-striped, black, gold-spotted, dwarf, and many others. Each of them is original in something and in something similar.

This omnivorous creature does not go through food at all. Hermit crabs eat both plant and animal food. They love algae, eggs, mollusks, worms, fish, as well as the remnants of food anemone. Never disdain crayfish and carrion.

With the help of their claws, they do not tear the food into small pieces and only after that they gladly absorb everything. Land hermit crabs dilute their diet with fruits, coconuts and small insects.

Reproduction and lifespan of a hermit

The breeding of these crustaceans can last for a whole year. The main role in this process is assigned to the female, which lays about 15 thousand eggs of bright red color. These eggs are attached to her abdomen.

Within a week, they turn into larvae, which detach from the female and swim independently in the water. Larval growth several times accompanied by molting. Already after the fourth molt, a young individual is obtained from the larva. It is noticed that they cannot breed in captivity. The average lifespan of hermit crabs is 10-11 years.