Cayman lives in Central and South America. These animals belong to the order of reptiles and are a discharge of armored and armored lizards. On skin shades, caimans can be black, brown or green.

But the caimans change their appearance depending on the season. The size of the caiman is on average from one and a half to three meters in length, and weighing from five to fifty kilograms.

The caiman’s eyes are protected by a membrane, which allows it to always be in the water; on average, 68 to 80 teeth have a caiman. Their weight can vary from 5 to 50 kg. Translated from Spanish, «caiman» means «alligator, crocodile.»

Cayman lives in small lakes, banks of rivers, streams. Although caimans are predatory animals, yet they are afraid of people, they are rather shy, calm and weak than they are different from real crocodiles. 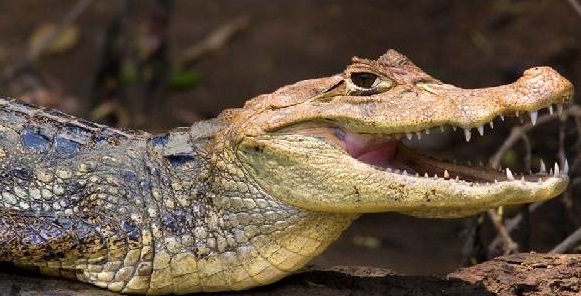 Caymans feed on insects, small fish, when they reach a sufficient size, they feed on large aquatic invertebrates, birds, reptiles and small mammals. Some species of caimans can eat a tortoise shell and snails. Caimans are slow and clumsy, but they move very well in the water.

By their nature, caimans are aggressive, but they are often taken out on farms, and in zoos a large number, so they get used to people fairly quickly and behave calmly, although of course they can still bite.

The crocodile caiman is also called a spectacle. This species has the appearance of a crocodile with a long narrow face, spectacle is called due to growths of bone formations in eyes similar to the details of glasses. Black caiman on photo 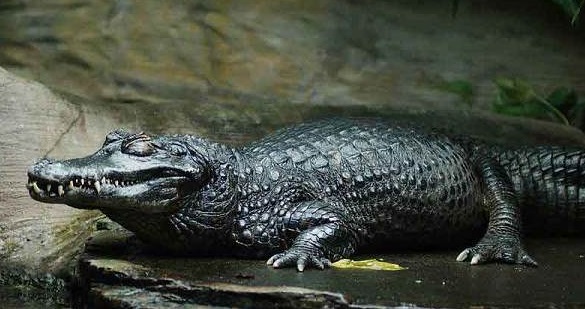 The largest males are three meters long. They hunt, preferably in the doge season, the food becomes little in the dry season, so cannibalism is inherent in the caiman at this time. Can even live in salt waters. Also, if the conditions in the environment become particularly harsh, they bury themselves in sludge and hibernate.

The color of the skin has the property of a chameleon and plays from light brown to dark olive. There are stripes of dark brown. Can make sounds from hissing to a sound similar to the croaking.

Like most caimans lives in swamps and lakes, in places with floating vegetation. Since these caimans are tolerant of brackish water, this allowed them to settle on the nearby islands of America. Brown caiman This species is very similar to its relatives, it reaches a length of two meters and is listed in the Red Book.

Wide caiman. The name of this caiman speaks for itself, this caiman has such a wide muzzle, which is wider even than in some species of alligators, they reach the largest of two meters. Body color is mainly olive green with dark spots.

This caiman leads mainly a way of life in water, and prefers fresh water, basically it is still and on the surface of the water only the eyes. Loves nocturnal can live near people. 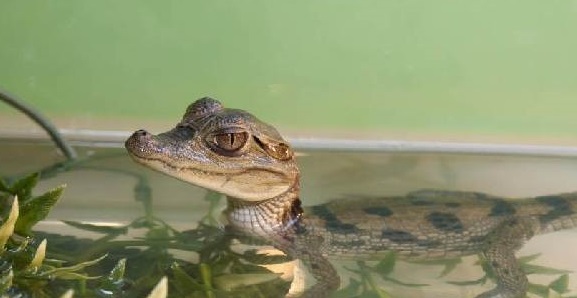 They eat the same food as other caimans can also bite through the shell of turtles and therefore they are present in its diet too. Food mostly swallows whole except naturally turtles. Since his skin is suitable for processing this kind of tempting prey poachers and therefore this species is propagated on farms.

Paraguayan caiman It is also very similar to the crocodile caiman. In size they can also reach three meters and in color they are the same as crocodile caimans, they are distinguished by the fact that the lower jaw protrudes above the upper one, and also by the presence of protruding sharp teeth, and for this this caiman is called “piranha caiman”. This type of caiman is also listed in the red book.

Dwarf caiman. The smallest species of caimans, the largest individuals reach a length of only one hundred fifty centimeters. They prefer fresh water bodies and nocturnal lifestyle, they are very mobile, and during the day they sit in burrows near the water. Eat the same food as other types of caimans.

Reproduction and life expectancy of the caiman

In general, the breeding season lasts in the rainy season. Females build nests and lay eggs, their number varies depending on the species, it is on average 18-50 eggs.

An interesting fact is that in wide-mouthed caimans, the male, like the female, participates in the process of creating a place for laying eggs. The eggs lie in two rows with different temperatures, because at a warmer temperature the male hatch at a colder temperature.

The duration of incubation on average seventy days. All this time, the female guards its nests, and females can unite to protect their future offspring, but still, on average, eighty percent of the clutch is ruined by lizards.

The female on the expiration of the term helps the caiman to survive, but, even despite all the caution, few survive. Life expectancy is always different, since caimans initially look like old ones. But it is considered that on average the caiman lives up to thirty years.

The crocodile caiman and alligator are ancient predatory animals that have great physical strength, they are very necessary for the planet, because they are orderlies of the places where they live.

But now poachers are hunting for the skin of these animals, and thanks to the destruction of many habitats of these animals by humans themselves, the population of these animals has declined significantly, some have already been listed in the Red Book. Many farms have been created where reptiles are artificially reproduced.