Chameleon — an animal that stands out not only the ability to change colors, but also the ability to move the eyes independently of each other. Not only these facts make it the most amazing lizard in the world.

Features and habitat of the chameleon

It is believed that the name chameleon came from the Greek language and means «earthen lion.» The chameleon area is Africa, Madagascar, India, Sri Lanka and Southern Europe. Most often found in savannas and forests of the tropics, some live in the foothills and a very small number occupy the steppe zones. To date, there are about 160 species of reptiles. More than 60 of them live in Madagascar.

The remains of the oldest chameleon, whose age is about 26 million years, were found in Europe. The average reptile length is 30 cm. The largest specimens of the chameleon species Furcifer oustaleti reach 70 cm. Representatives of the Brookesia micra grow only up to 15 mm. 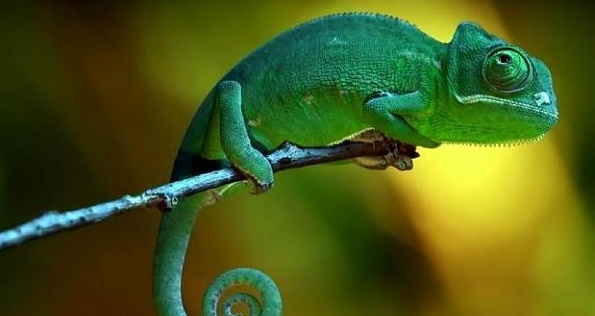 The head of a chameleon is decorated with a crest, knolls or elongated and pointed horns. Such features are inherent only to males. In appearance, the chameleon looks like a lizard , but in fact they have little in common.

On the sides, the body of the chameleon is so flattened that it seems as if he had been under pressure. The presence of a jagged and pointed ridge makes it similar to a small dragon, the neck is almost absent.

On long and thin legs there are five fingers, which have grown together in the opposite direction from each other by 2 and 3 fingers and form a kind of claw. On each of the fingers are sharp claws. This allows the animal to perfectly hold and move on the surface of trees. The tail of the chameleon is rather thick, but by the end it becomes narrow and can twist in a spiral. This is also the grasping organ of the reptile. However, some species have a short tail.

The reptile’s tongue is one and a half to two times longer than the body. They catch prey to them. Lightning fast (0.07 seconds) throwing out the tongue, chameleons seize the victim, leaving almost no chance of salvation. The outer and middle ear in animals is absent, which makes them almost deaf. But, still they can perceive sounds in the range of 200-600 Hertz. 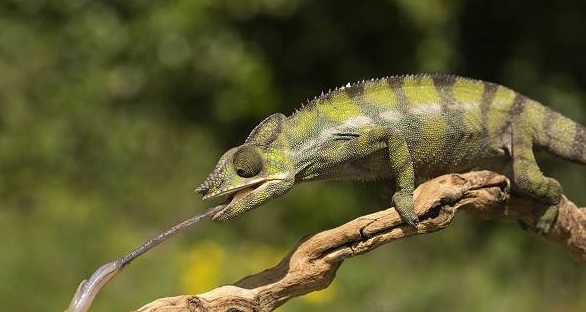 This deficiency is compensated by excellent vision. The eyelids of chameleons constantly cover their eyes, since are accrete. For pupils there are special holes. The left and right eyes move inconsistently, which allows you to see everything around at an angle of 360 degrees.

Before attacking, the animal focuses both eyes on prey. The quality of vision makes it possible to find bugs at a distance of ten meters. Chameleons perfectly see with ultraviolet. Being in this part of the light spectrum, reptiles are more active than in the ordinary. 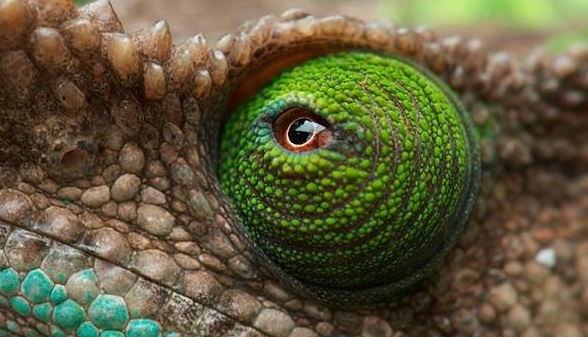 In the photo the eyes of a chameleon

Chameleons acquired particular popularity due to their ability to change color . It is believed that by changing the color the animal masks itself as its surroundings, but this is wrong. Emotional mood (fear, feeling of hunger, marriage games, etc.), as well as the surrounding conditions (humidity, temperature, light, etc.) are factors that affect the change in reptile color.

The change in color is due to chromatophores — cells that contain the corresponding pigments. This process lasts for several minutes, besides the color does not change completely.

The nature and lifestyle of the chameleon

Virtually all life chameleons spending in the branches of trees. They descend only in the mating season. It is in this setting that the chameleon is easier to stick to disguise. On the ground with claws-paws to move hard. Therefore, they have a swinging gait. Only the presence of several points of support, including the prehensile tail, allow animals to feel great in the thickets.

Chameleon activity is manifested in the daytime. They move a little. Prefer to be in one place, tail and paws clasping a tree branch. But they run and jump rather quickly, if there is a need for it. Birds of prey and mammals, large lizards and some snakes can be dangerous to the chameleon. At the sight of the enemy, the reptile inflates like a balloon, its color changes. 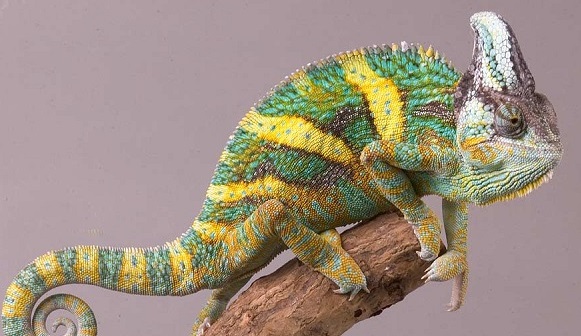 As you exhale, the chameleon begins to snort and hiss, trying to frighten the enemy. It may even bite, but since the animal has weak teeth, it does not cause serious wounds. Now many people have a desire to buy an animal chameleon . At home, they are kept in a terrarium. Chameleon as a pet will not take much trouble, if you create a comfortable environment. On this issue is better to consult with a specialist.

The diet of the chameleon is made up of various insects. While in ambush, the reptile sits on a branch of a tree for a long time, only its eyes are in constant motion. True, a chameleon can sometimes sneak up on a victim very slowly. The capture of an insect occurs by throwing the tongue and pulling the victim into the mouth.

It happens instantly, up to four insects can be caught in only three seconds. Chameleons hold their food with the help of the extended end of the tongue, which plays the role of a sucker and very sticky saliva. Large objects are fixed using the rolling process in the tongue. 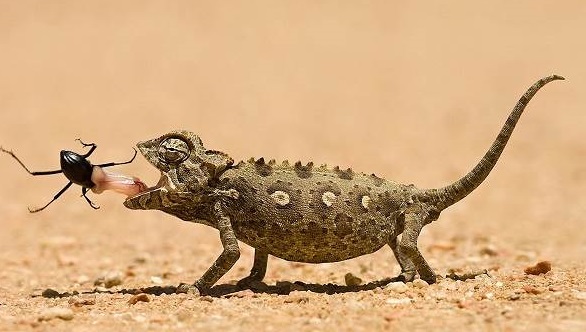 Water consumed from stagnant ponds. With the loss of moisture, the eyes begin to fall, the animals almost «dry up». At home, the chameleon prefers crickets, tropical cockroaches, fruits, leaves of some plants. Do not forget about water.

Most chameleons are egg-laying. After fertilization, the female bears eggs for up to two months. Some time before the eggs are laid, the expectant mother shows extreme anxiety and aggression. They have a bright color and do not let the males to them.

The future mother goes down to the ground and is looking for a place to dig a hole and lay eggs. Each species has a different number of eggs and can be from 10 to 60. There can be about three layings throughout the year. Embryo development can take from five months to two years (also depending on the species). 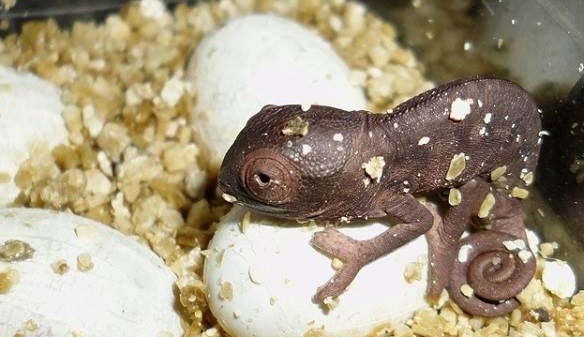 Toddlers are born independent and, as soon as they hatched, they run to the plants to hide from enemies. If the male is absent, “fatty” eggs may be laid by the female, from which the young will not hatch. They disappear in a few days.

The principle of birth of viviparous chameleons is not very different from egg-laying. The difference is that the female bears eggs inside herself until the birth of babies. In this case, up to 20 children may appear. Chameleons do not raise their offspring.

The life of a chameleon can be up to 9 years. Females live much less because their health is undermined by pregnancy. The price of chameleons is not very high. However, the unusual animal, charming appearance and funny habits are able to please the most captious amateur fauna.