The appearance of this poultry baffles for a few minutes everyone who sees it for the first time. The man is trying to understand who is in front of him — a small turkey or a large, partially plucked chicken? 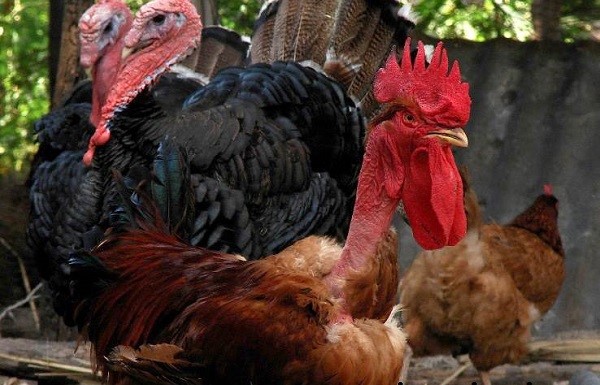 Even in the photo, hen goose-shoes are puzzled by their appearance, and a number of countries, including Romania and Spain, claim the right to call themselves their Homeland.

Description and features of the breed neck

The main distinguishing feature of these birds is the absence of feathering on the neck, goiter, under the wings and on the inner sides of the legs. These sites are called apterias and have clear standards. Feathers of birds do not lose, contrary to popular belief, they are already born with underdeveloped follicles in these parts of the body.

But on the backs of their heads they have a gorgeous feather bow or cap, and in the front, feathers fold into a lush collar. Genetically established “nakedness” is the dominant trait, necessarily shifting to the chicks while keeping the breed clean. 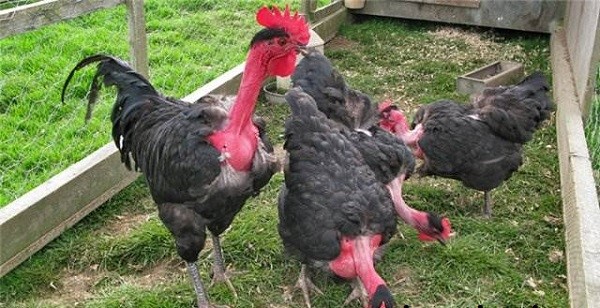 Speaking about the breed, it should be noted that at poultry exhibitions, these chickens always gather around them enthusiastic onlookers, and rather strict requirements are imposed on their exterior, judges may reject chickens for the following reasons:

As for the tail, in the standards its location is described as “at an angle of 15-20 degrees,” but deviations at this point are very common. For the first time professional poultry farmers and farmers encountered this breed at an exhibition in Vienna in 1875, and by 1930 these chickens had already spread throughout Europe, including part of the territories of the USSR. 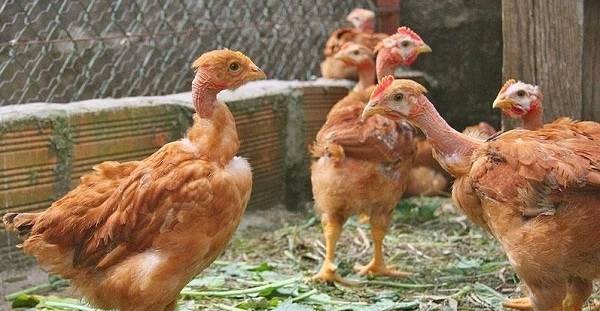 Of course, the leadership was left for the not so exotic, habitual looking hens, but nevertheless, already at that time, the peaks had a circle of fans, which had only expanded since the beginning of the 20th century. The reasons for the fervent love of many farmers for this bird are not its appearance at all, but such qualities of the breed as:

In addition, the bird is quite large and its meat has all the qualities that can satisfy even the finest gourmets. For example, these particular chickens began to be supplied to the imperial court in Russia in 1911. 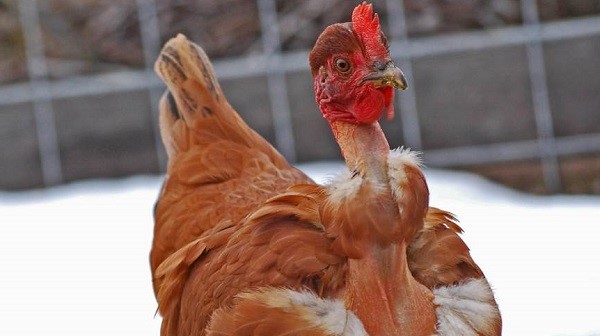 Such characteristics of hens are golosehek, talking about the complete universality of this breed, as well as their unique exotic appearance, in which. In addition to the bare neck, a significant role is played by the bright and diverse colors of the existing feathers, which have made the bird very popular, both among poultry farmers who practice selection and among ordinary business executives. As for the characteristics of the productivity of the breed, the hen goose-foot differ:

Care and maintenance of talons

These birds were very common during the USSR in collective and state farms and poultry farms of Moldova and western Ukraine, then the breed was called Transylvanian. Earlier, before the war, these chickens were called Semigradskaya golosheynaya.

Now, poultry farmers and farmers who are interested in this breed of chickens will acquire a bird with the name — Spaniard goloshika. Regardless of how they are called, the main points in keeping and caring for birds remain unchanged and depend primarily on the climate in which the birds live. 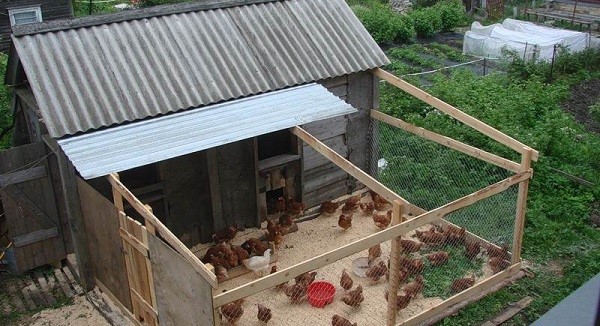 For the maintenance of chickens in Russia, of course, you will need an indoor insulated poultry house, and in the same Spain, birds are quite content with roosts under a shed. General tips for keeping heifer breed chickens:

Since, in the main, they make turfs because of the high egg production and excellent quality of eggs, it should be taken into account when they are kept, that the egg production of the hen hens directly depends on the length of the day. 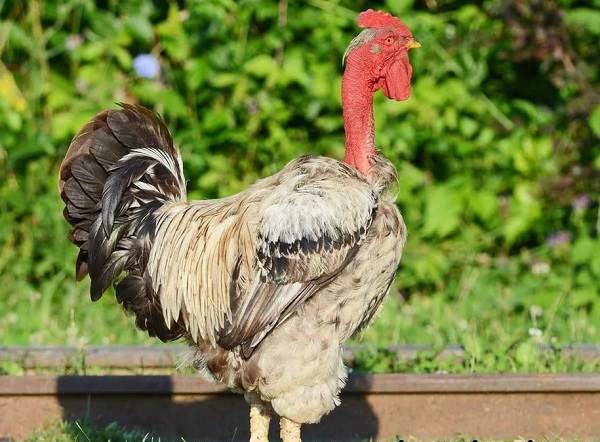 In the photo naked cock

Therefore, short winter days need to be supplemented, compensating for the lack of lighting, that is, the activity of chickens. It is recommended to do this as follows:

As for the nutrition of birds, they do not sort out food, pecking everything. Therefore, people should take care that there would be well-balanced grain mixtures or ready-made feeds in the feeders.

These birds do not require any other additional care or special maintenance, and according to the opinions of those who keep them on the farm, golosheky chickens have a very friendly and calm disposition and get along well with all other inhabitants of the house.

However, you can not be puzzled by the preparation of mixtures, and buy ready-made feed. Many farmers do not use ready-made mixtures because of their unprofitability, but in the case of the presence of golosheki on the farm, this question becomes irrelevant due to their high productive egg production. 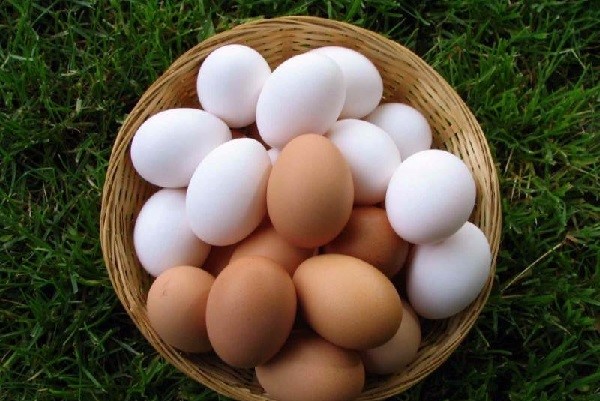 realizing the eggs of these birds, it is quite possible to contain the rest of the economy. In general, one adult bird eats from 130 to 150 grams of feed per day, which is not so much. They feed golosheek the same way as any other chickens — in the morning and in the evening.

Having bought hens for golosheek, any farmer, sooner or later, decides to breed them. Here the poultry farmer awaits such a feature of the breed as the “unwillingness” to hatch eggs. Rides are very attentive and caring parents, but, paradoxically — disgusting chickens. Therefore, for breeding will need an incubator. 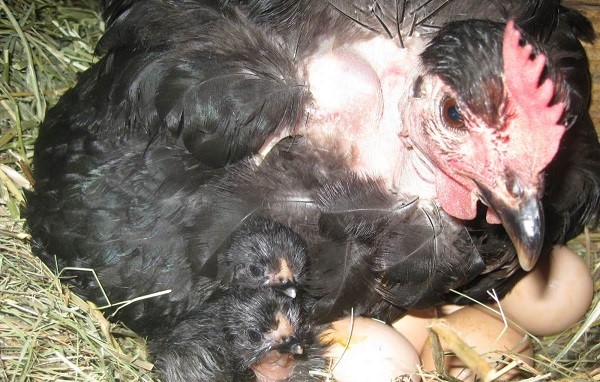 But this is the only difficulty. The survival rate of offspring of goshas is very high — 95-98%. Caring for hatched chicks is no different from caring for any other chickens.

At the very beginning of their lives, chickens are very sensitive. Therefore, you need to place the kids in a dry, ventilated, but not having drafts, a room with a temperature of from 26 to 30 degrees Celsius.

As the chicks grow older, the temperature should gradually decrease, and by the 30th day of their life they should be already 18-20 degrees. As for feeding, it is not at all different from feeding normal, not naked chickens.

Reviews of poultry farmers about this breed of hens are only flattering. At what, it concerns not only their egg production, but also meat. Besides. when felling you do not need to pluck the bird’s neck, which also adds to it advantages over others.

In addition, poultry to their taste is very similar to turkey, which allows it to be used in the preparation of dishes that require turkey recipes and, accordingly, reduces their cost, but does not reduce the taste. 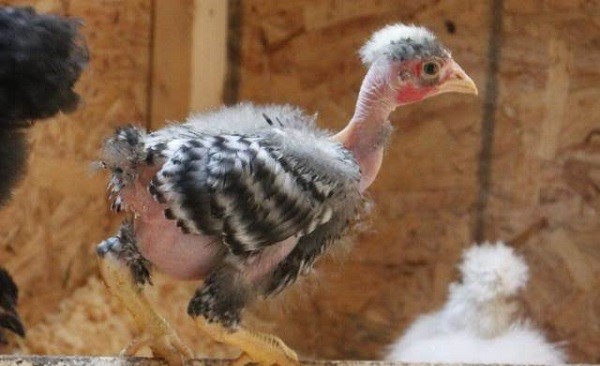 In Europe, the tops are very popular in small universal farms, selling products in a couple of restaurants and local meat shops. In Russia, such interaction is not yet fully developed, but is already gaining momentum.

For example, roadside restaurants and hotel complexes for several years, as they prefer to work directly with local farmers. You can buy birds for your farm in a couple of ways — buy chickens or eggs for an incubator. The price of a chicken drum is, on average, from 59 to 74 rubles per egg for hatching and from 80 to 290 rubles per chicken.

You can purchase chickens using special farmer forums, sales announcements or at agricultural fairs, the largest one is held in our country in Sergiev Posad twice a year. 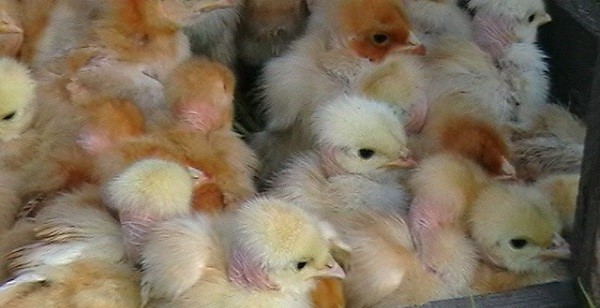 On the photo chickens

The description of the goose-neck chicken would be incomplete without mentioning that the breed in the last decade has been extremely popular with breeders, both amateurs and large companies.

For example, the French, the company SASSO, engaged in the selection of «colored» poultry, derived a number of hybrids, known to farmers and poultry breeders, like French bighholes.

In general, the bird is not only very convenient for keeping and very profitable, but also promising in breeding, which draws the attention of many business executives to it. Both beginners and have significant experience.