Crested-triton belongs to the family of the real salamander, detachment of tailed amphibians. This animal was first mentioned by a naturalist from Sweden K. Gesner in the middle of the XVI century, calling it a «water lizard «. 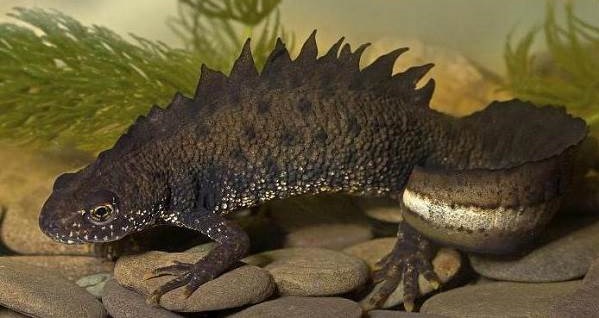 The family itself currently includes almost a hundred species of tailed amphibians, but only four of them are distributed in Russia. These include the lizard and the crested newt .

Tritons inhabit the northern lands of Germany, Switzerland, France and Poland, and they can easily be found in Belarus and Ukraine. From the south, the area is bordered by the Balkans and the Alps.

The distribution sites of the comb triton coincide with the habitat of the newt triton, although the number of the first ones is 5 times smaller, and they prefer the warmer water. 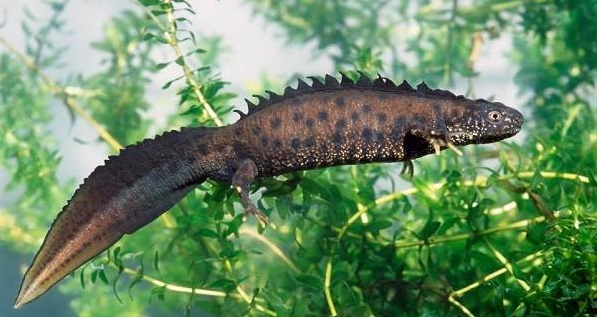 Moreover, the water in them must be clean, as for the purity of the water comb-tailed are particularly selective. Having met this amphibian in the pond, be sure that the water in it is fresh.

Description and features of the crested-triton

From the photo of the crested-triton one can easily recognize the sex of the animal. In males, from the eye level to the tail, there is a well-pronounced toothed comb. At the beginning of the tail, it is interrupted and continues again, but the notch no longer has.

Females are deprived of a crest and smaller than males. The length of their body varies from 12 to 20 cm, the male does not exceed 15-17 cm in size. The tail of a water lizard is slightly less or equal to the length of the entire body of an amphibian.

The back and sides of the triton are covered with coarse granular skin, and on the abdomen it is soft and smooth. The lizard is painted in a dark brown color with spots, which is why it often seems almost black. A wide silver or blue stripe runs along the tail. 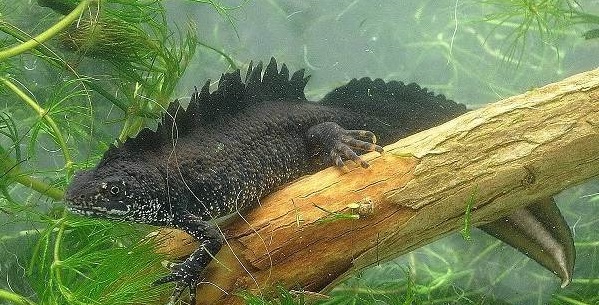 The abdominal side and fingers, on the contrary, are bright orange with dark spots. Because of this contrasting feature, comb newts have become frequent inhabitants of home aquariums.

Once in the water, once a week the lizard sheds, and the skin is not damaged, the triton is freed from it, turning it inside out. Also noted is the Triton’s amazing ability to change its color from a lighter shade to a darker one and back again. This view is unique in the ability to regenerate practically any part of your body, starting from the fingers, ending with the eyes. 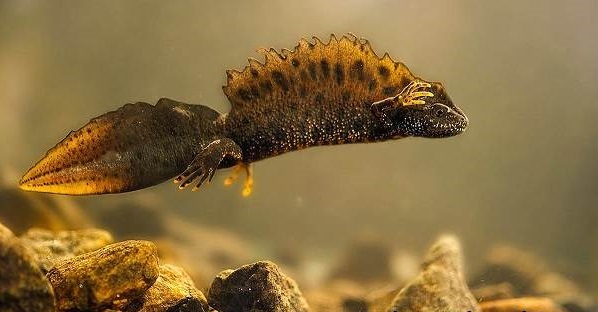 Much of the time comb-shaped amphibian lives on land, and only in spring, when the breeding season comes, completely goes into the water. Does not tolerate the open sun and heat, so she likes to hide under the snags, in the leaves of the nast or in the shade of the bushes. During the day, the animal is active in the water, but at dusk it is chosen to land, where it spends time hunting.

By the end of the autumn the cold weather comes and the triton goes into hibernation. An amphibian is settled in gravel, vegetative rag, burrowing in moss or in burrows of rodents and moles . If people live nearby, newts spend the winter quietly in basements or in other household buildings.

They can winter both alone and in large concentrations of individuals. They come out of hibernation by mid-March, retaining the ability to move even at zero thermometer values.

When the triton swims, he presses the legs to the body, they also serve him as a steering. The main “pusher” is the tail, which the animal swings up to 10 times per second, developing considerable speed in the water. 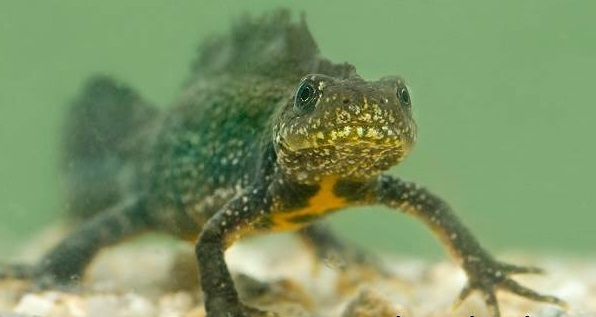 Being a predator, the diet of the crested triton consists of larvae, beetles , slugs, crustaceans , and also a special delicacy — caviar and tadpoles of other amphibians. There are cases of cannibalism among adult representatives.

The comb triton is no different with good vision, therefore it is difficult for him to catch live food in water bodies and on land. In view of this feature, lizards often have to starve.

In captivity, amphibians can be fed with a dry bloodworm, which is sold at any pet store. Do not refuse tailing and from cockroaches , tubers, earthworms.

Reproduction and life expectancy of crested-triton

Waking up in March from winter hibernation, comb newts prepare for the mating season. Their color becomes brighter, the male has a high ridge, symbolizing the animal’s desire for fertilization.

The female who has come to the call, is involved in an amazing dance, during which the male wriggles with his whole body, touching his tail to the head of the female, not allowing her to pass.

Infuriated boyfriend lays in the water lumps of mucus with male reproductive cells, which the conquered darling takes into his cesspool. The process of fertilization takes place already inside the body.

On average, the female newt lays out 200 eggs, but sometimes the number exceeds 500 embryos. Spawning takes from two to eight weeks. Eggs, one by one or in chains in several pieces, the female clings to the back of the leaves, leaving them open. 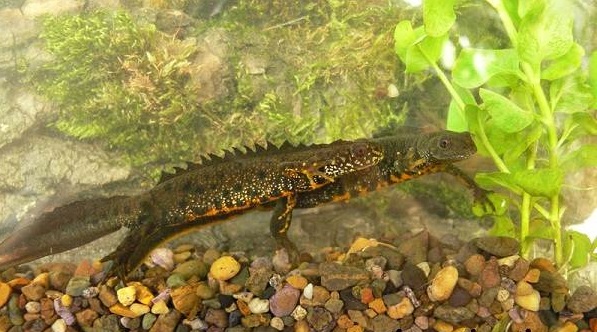 After a couple of weeks, 8–10 mm larvae appear from the eggs. At first they are starving, because at this stage the mouth has not yet formed, but the front paws and gills, which the larva breathes before the onset of metamorphosis, can be traced. A week later, the hind limbs appear.

Like adults, the larvae are predators. Attacking from an ambush, they eat small invertebrates, and also feed on the larvae of mosquitoes . Often, larger crested newt youngsters do not hesitate to eat smaller individuals of the common newt.

By the beginning of autumn, the metamorphosis of the larvae is completed, and they are carefully selected for land, hiding in the vegetation and under the snags near the reservoir. Young animals are capable of independent breeding upon reaching the age of three. 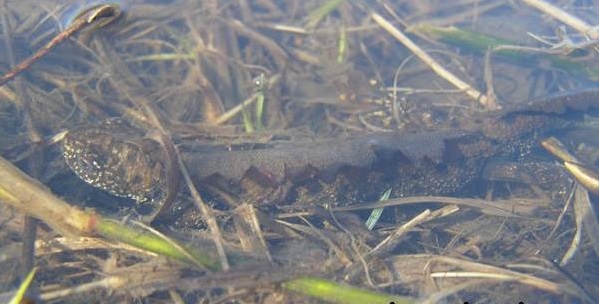 In their natural environment, tailed amphibians live for 15–17 years, and live in captivity up to 25–27 years. The triton population is rapidly declining due to the development of industry and the pollution of clean waters, to which tritons are so susceptible.

Entering the crested-triton in the International Red Book and the Book of several regions of Russia has become an inevitable measure in the struggle for its survival.