The crocodile, a reptile animal, enters the detachment of aquatic vertebrates. On Earth, these animals appeared more than 200 million years ago. The first individuals first lived on land and only later mastered the aquatic environment. The closest relatives of crocodiles are birds. 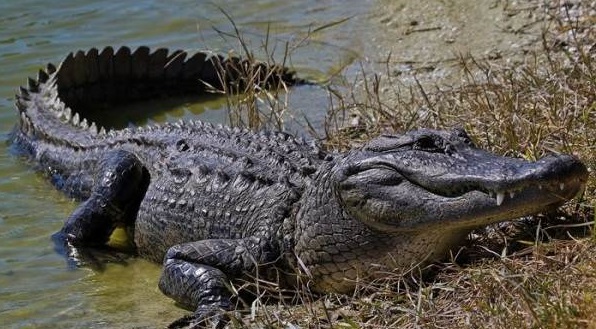 Life in water has formed the corresponding reptile body: the crocodile’s body is long, almost flat, with a flat long head, powerful tail, legs short with fingers connected by membranes.

A crocodile is a cold-blooded animal, its body temperature is about 30 degrees, sometimes it can reach up to 34 degrees, it depends on the ambient temperature. The animal world of crocodiles is very diverse, but only the species of the long body differ, there are reptiles up to 6 meters, but most are 2-4 meters. The largest combed crocodiles weigh more than a ton and have a length of up to 6.5 m, they are found in the Philippines.

The smallest land crocodiles 1.5-2 m live in Africa. Under water, the crocodile’s ears and nostrils are closed with valves, transparent eyelids are lowered, thanks to them the animal sees well even in muddy water.

The mouth of crocodiles has no lips, so it does not close tightly. To prevent water from entering the stomach, the entrance to the esophagus is blocked by a palatine curtain. The eyes of a crocodile are located high on the head, therefore only the eyes and nostrils are visible above the water surface. The brown-green color of a crocodile masks it well in water. 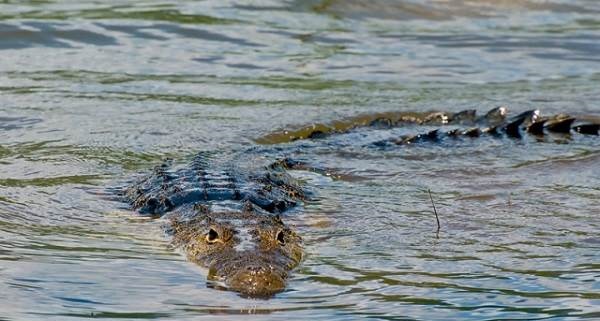 Crocodiles live in the fresh waters of the tropics. There are species of crocodiles that are well adapted to salty water, they are found in the coastal strip of the seas — this is a ridge, Nile, African narrow-crocodile. 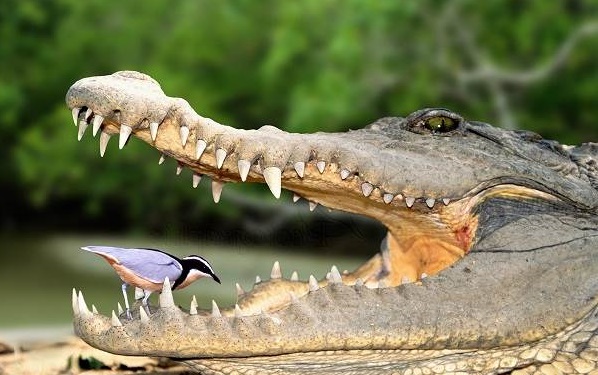 Mostly crocodiles live in fresh waters, in hot weather when the reservoir dries out they can dig a hole at the bottom of the remaining puddle and hibernate. In a drought in search of water, reptiles can crawl into caves. If hungry crocodiles are able to eat their relatives. On earth, animals are very sluggish, clumsy, but in the water they move easily and gracefully. If necessary, they can move to other reservoirs by land, overcoming several kilometers.

Crocodiles hunt mostly at night, but if the prey is available during the day, the animal will not refuse to eat. A potential victim, even at a very large distance, can be found by reptiles located on the jaws.

The main food of crocodiles is fish, also small animals. The choice of food depends on the size and age of the crocodile: invertebrates, fish, amphibians, and small mammals, reptiles, and birds are preferable to young individuals.

Very large crocodiles calmly cope with the victims more than themselves. So Nile crocodiles hunt wildebeest during their migration; the greasy crocodile hunts livestock during the rains; Madagascar can even eat lemurs.

Food reptiles do not chew, they tear her teeth into pieces and swallow them whole. Too large prey, they can leave at the bottom for soaking. Stones swallowed by animals help to digest food, they crush it in the stomach. Stones can have impressive dimensions: a Nile crocodile can swallow a stone up to 5 kg.

Crocodiles do not eat carrion, only if they are very weak and not capable of hunting, they do not touch rotten food at all. Reptiles eat quite a lot: about a quarter of their weight can eat food at a time. About 60% of the food consumed is converted into fat, so the crocodile can starve for up to one to a year if necessary.

The crocodile belongs to animal longevity, it lives from 55 to 115 years. Its sexual maturity comes early, approximately at the age of 7 — 11 years. Crocodiles are polygamous animals: a male in a harem has 10 to 12 females. 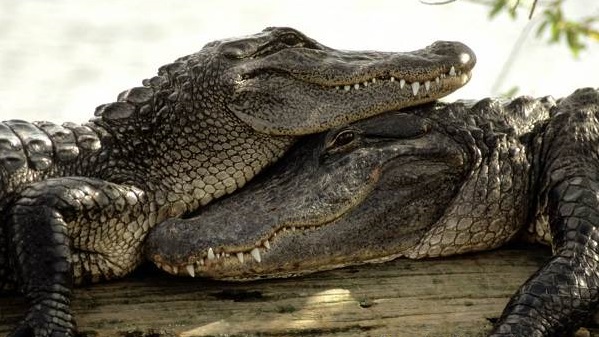 Although animals live in water, they lay eggs on land. At night, the female pulls a hole in the sand and lays there about 50 eggs, falls asleep with leaves or sand. The size of the recess depends on the illumination of the place: in the sun the fossa becomes deeper, in the shade it is not very.

Eggs ripen for about three months, all this time the female is next to the clutch, practically not feeding. The sex of future crocodiles depends on the temperature of the environment: females appear at 28-30 ° C, males at temperatures above 32 ° C. Before the birth of the young inside the eggs begin to grunt. Mother, hearing the sounds, begins to dig up the clutch. Then helps kids get rid of the shell, rolling eggs in the mouth 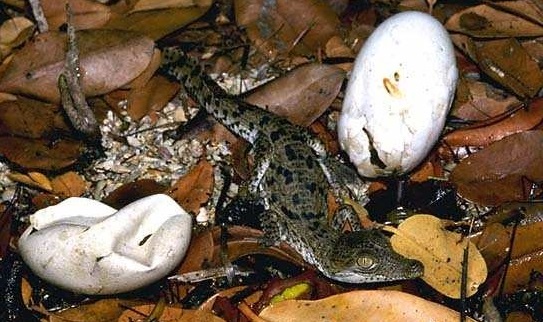 The female crocodiles with a size of 26-28 cm are carefully transported by the female into a shallow pond, capturing into the mouth. There, they grow up within two months, after which they diverge in the surrounding not heavily populated reservoirs. Many small reptiles die, they become victims of birds, monitor lizards and other predators.

The surviving crocodiles first feed on insects, then hunt small fish and frogs, and from 8-10 years of age begin to catch larger animals. Not all types of crocodiles are dangerous for humans. So the Nile crocodile and crescent are cannibals, and gavial is not at all dangerous. Crocodile as a pet today is kept even in city apartments. 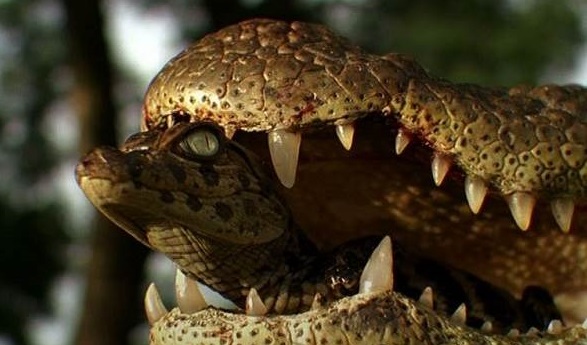 In the habitats of crocodiles are hunted, their meat is eaten, the skin is used to create haberdashery products, which has led to a reduction in the number of crocodile populations. In some countries today they are bred on farms; in many tribes, crocodiles are considered sacred animals.