Peculiarities and habitat of cross spider

The cross spider belongs to the orb family. Such an unusual name was called the spider because of a large visible cross on the back, formed by bright spots. 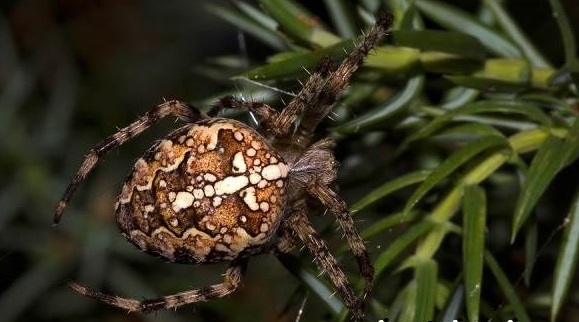 The belly of a «flycatcher» is a regular round shape, most often brown in color, but there is also a white cross, whose belly is light yellow or beige. Long legs are very sensitive to the slightest fluctuations of the web.

The spider’s cross has four pairs of eyes, arranged so that the insect has a 360 degree view. However, his vision leaves much to be desired, the spider can see only the shadows and fuzzy outlines of objects.

There are a lot of species of spiders of krestovik — about 2000, in Russia and the CIS there are only 30 of them, and everyone can boast of a pronounced cross on the upper abdomen. 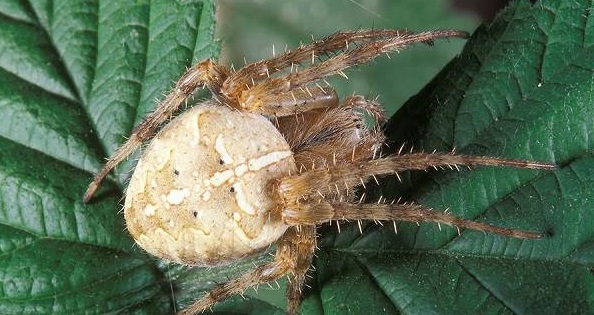 The size of the female individual can vary from 1.5 to 4 centimeters (depending on the belonging to a particular species), male — up to 1 centimeter. The mixed cavity of the body of the insect, mixoxel, which appeared as a result of the connection of the primary cavity with the secondary, is also surprising.

One of the most common species is the common cross. The female of this species can reach 2.5 centimeters in length, the males are much smaller — up to 1 centimeter. The abdomen in the male is rather narrow, in the females it is large and round. Color may vary slightly, adapting to the lighting at this time.

The body of the spider covers a special wax, which contributes to the preservation of moisture. The female of the krestovik spider has a reliable protection — a cephalothoid shield, and the eyes are located on it.

In the photo the female spider krestovik

Preferred habitats are always quite moist and wet. It can be forests, fields and meadows near swamps and ponds, groves, gardens, and sometimes human buildings.

The nature and lifestyle of the spider krestovik

Most often for a permanent place of life the spider chooses the tree crown. Thus, he immediately arranges both a dexterous net (between the branches) and a shelter (in thick leaves). The cobweb of the spider of the krestovik is clearly visible even at some distance, it is always round and even and rather large.

Economic krestovik carefully monitors the state of the threads in the web and be sure to completely update it every few days. If a large web becomes a trap for an insect that is “not on the shoulder” of a spider, it breaks off the threads around its prey and removes it.

Replacing the old trap with a new one most often occurs at night, so that by morning it is ready for hunting. This distribution of time is also justified by the fact that at night the enemies of the spider are sleeping, not representing a danger, it can do its work calmly. 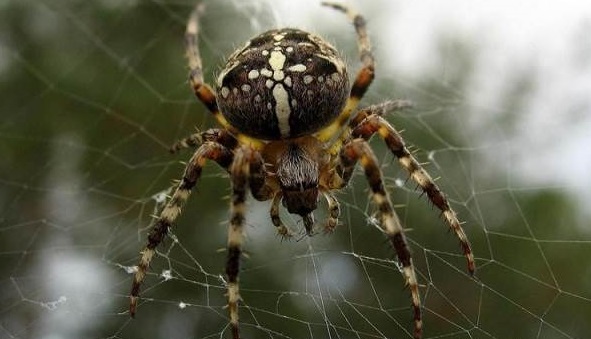 It would seem, how can an almost blind spider build such complex buildings in complete darkness! However, in this case it is not based on vision, but on touch, which is why the network is always so even. Moreover, the female network weaves according to strict canons — it always keeps the same distance between the turns, there are 39 radii, 35 turns and 1245 connecting points.

Scientists have found that this ability is laid at the genetic level, the spider does not need to learn this — it performs all movements unconsciously, automatically. This explains the ability of young spiders to weave the same web as adults.

The effects of a spider bite can be unpredictable, since its poison is toxic not only for insects, but also for vertebrates. The composition of the poison is hemotoxin, which has a negative effect on the erythrocytes of animals. 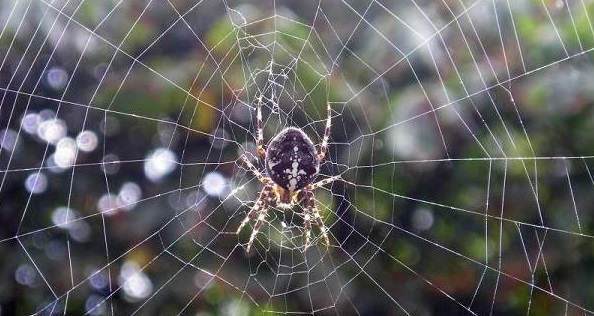 It is worth noting that dogs, horses and sheep are resistant to the bite of a spider’s cross. Due to the fact that the poison is toxic, as well as that the spider has a bale and can even bite through the skin of a person, there is a perception that it is dangerous for people.

But, this is all prejudice. Firstly, the amount of poison released during one bite is too small to cause harm to a large mammal, which man is. Secondly, the vertebral poison acts reversibly. So a spider the yoke is not dangerous for a person (the exception is made by people with individual intolerance).

The main ration of the krestovik consists of various flies, mosquitoes and other small insects, which it can eat about a dozen at a time. At first, a sticky substance is released from the spider’s web of a spider, which only in air becomes a strong thread. 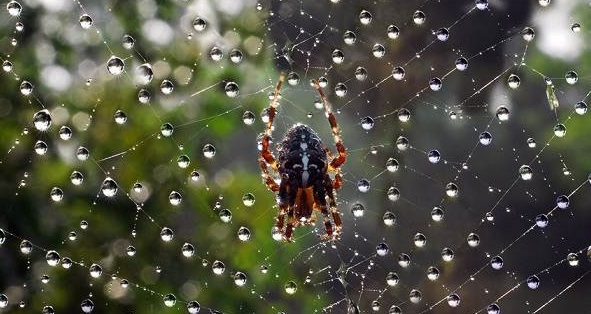 A cross can produce and spend about 20 meters of silk on one fishing net. Moving on the web, its owner is concerned only with radial threads that are not sticky, so he does not stick. During the hunt, the spider waits in the center of the trap or is located on the signal thread. When the victim sticks to the net and tries to get out, the web begins to vibrate, the hunter feels even the slightest vibration with sensitive limbs.

The spider injects a dose of poison into the prey and, depending on the situation, can eat it immediately or leave it for later. If the insect acts as a backup source of food, the crosshack envelops it with cobwebs and hides them safely in its shelter.

If a too large or poisonous insect falls into the trap, the spider cuts the web and gets rid of it. The spider avoids contact with insects that lay eggs on other insects or animals, since the large abdomen of the spider can be a great place for the larvae.

The process of digestion of the spider occurs in the body of the victim with the help of digestive juice. The cross, like other spiders, cannot digest food on its own.

The male spider is small, inconspicuous and most often dies after its very first mating. That is why the photo of the crosshead most often gets on the photo — big and beautiful. The search for the companion spider begins in the fall. It is located on the edge of its web and creates a slight vibration. The female recognizes the signal (does not take it for prey) and approaches the spider.

After mating, the female prepares for laying, weaving a strong robust cocoon, where later in the fall and lay all the eggs. Then the mother reliably hides the cocoon, in the place chosen by her the eggs hibernate and only spiders appear in the spring. All summer they grow up, experiencing several processes of molting and are ready to continue the race only by the next fall. The female usually lives to this point. 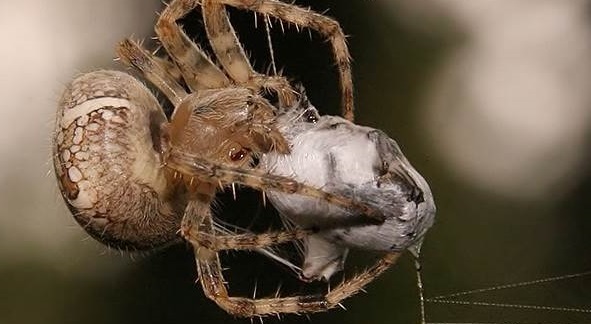 In an ordinary cross, the breeding period begins a little earlier — in August. The male also looks for a pair for himself, attaches a signal thread to its web, pulls it, creating a certain vibration, through which the female recognizes him.

If she is ready in the process of mating, she leaves the familiar place in the center of the trap and descends to the male. After a few seconds, the action is over, however, in some cases it can be repeated. In the autumn, the female lay in a cocoon and hides it, then dies. After wintering, spiders come into the world in spring. In the summer they are growing up and experiencing another wintering.

Only by the next summer they become adults and are ready to continue the race. That is why there is no unequivocal answer to the question “how much a spider the crosshair lives” — it all depends on the belonging of a particular individual to a particular species.