Cuckoo is a bird. Lifestyle and the cuckoo habitat

The familiar bird cuckoo associated with a lot of people’s perceptions, everyone heard in the forest, in a park or in a garden plot. The name of the feathered is the onomatopoeia of a typical song with multiple repetitions. 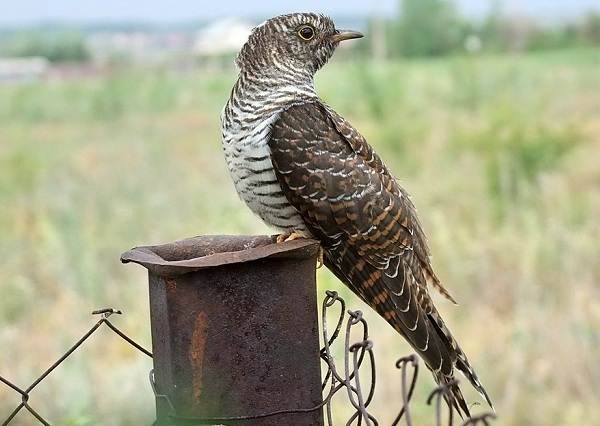 In everyday life, cuckoo’s are called bad mothers who left their children to other people’s upbringing. The name, which has become a common name, is associated with the peculiarities of breeding offspring. But not all species of cuckoo are the same, their behavior does not deserve an unequivocal evaluation.

Ancient authors were the first to point out the similarity of the external signs of a cuckoo and a hawk. Aristotle linked the similarity with the belief in which a creature inclined to reincarnation had two guises. Scientists note the shape of the head common to birds, the nature of the tail and the features of the flight.

The size of a bird is comparable to the size of a medium-sized pigeon. The length is 33-34 cm, weight 100-180 g, the wingspan is 56-65 cm. The forest cuckoo on the photo shows an elegant build. The long wedge-shaped tail, short wings allow for perfect maneuvering in the thickets. 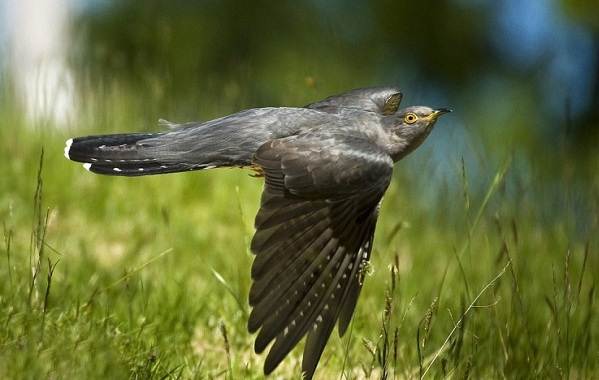 When the cuckoo is sitting, short legs are almost invisible. As with woodpeckers, the position of the fingers: two in front, two in the back, — allows you to hold firmly on a vertical surface, but prevents walking on horizontal surfaces.

The beak of cuckoos is black, with a slight yellow tint from below. Around the eyes there is a leathery ring of a bright orange hue.

The color of ordinary cuckoos is predominantly dark gray with an ashy tinge. The abdomen is light, in a transverse steel strip. The feet of the birds are always yellow. Sexual differences are almost not noticeable, but sometimes there are female white-red with transverse pestrinami. 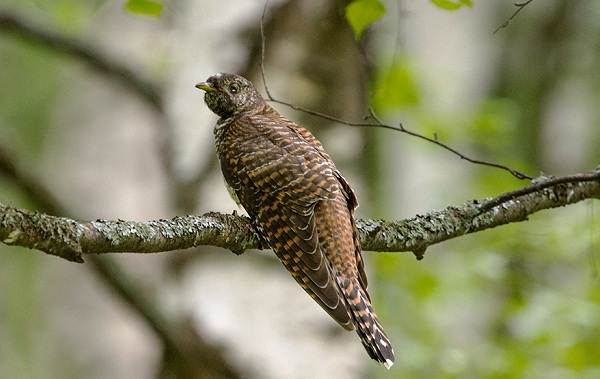 Young individuals are always more colorful, stand out gray-brown-red color scheme, with white spots on the back of the head, which in adult birds disappear. Moulting takes place in birds twice a year. Partial renewal of feathers is observed in the summer, and full — in the winter.

Depending on the variety of birds, the color varies considerably. So, bronze cuckoos have the appropriate shade for reliable camouflage. The golden cuckoo has yellow-beige plumage with dark specks.

The bird leads a secretive way of life, sounding infrequently its presence. The exception is spring and the first half of summer, when the marriage time turns males into noisy and vociferous singers. The repeatedly repeated appeal of «ku-ku» with reinforcement on the first syllable is aimed at attracting the female.

On clear days the voice of the cuckoo can be heard at a distance of two kilometers. If the bird is excited, then the measured sounds seem to merge into a single «ku-ku-ku-ku», similar to a whack or laughter. The female also makes cries of appeal, like a gurgling trill. If the birds caught are taken in their hands, they ring loudly. 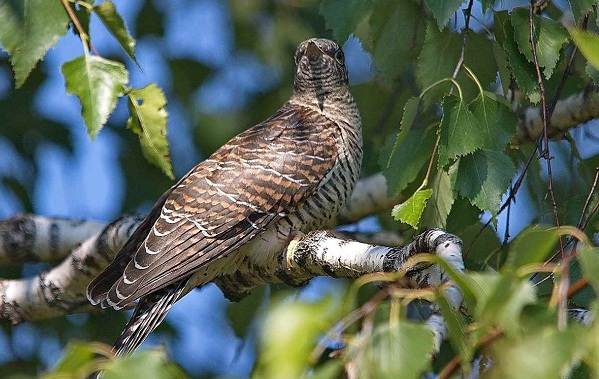 The ordinary cuckoo is the most famous bird among the relatives, of which there are many. The cuckoo family includes 6 genera of birds:

The variety of birds is represented by 140 species of cuckoo, which differ significantly from each other. Variants of coloration have emerged as a result of adaptation of the birds to the habitat.

Giddy cuckoo. A thin trunk, an elongated tail, strong paws. They live mainly in Central and South America. Cuckoo chicks are raised by themselves, but can also parasitize, laying eggs in the nests of other birds. 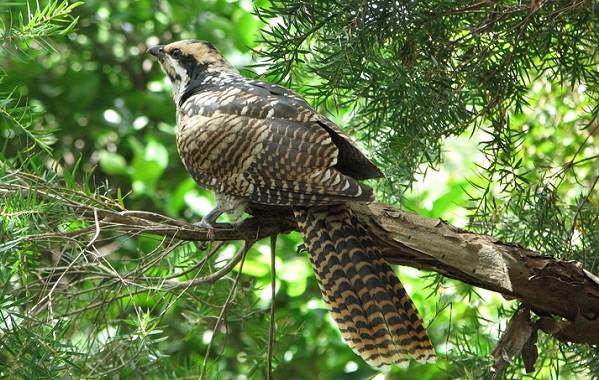 Shportsevye cuckoo. The long claw of the thumb gave the name to a genus inhabiting the tropics and subtropics. The size of a bird is with a crow. Color black-brown with a greenish-blue tint. The cuckoo’s nest is created by themselves, the chicks are nursed, taking care of them in turn. 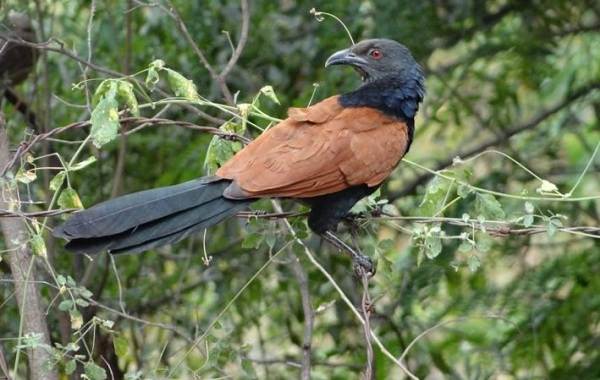 Running (ground) cuckoo. They live in the Western Hemisphere. Rarely they rise into the air, they often meet along roads. Striped color, a tuft on the vertex, a long neck and tail help maneuver on the run, making sharp turns. In the rearing of the offspring, the cuckoo is a nesting parasite. 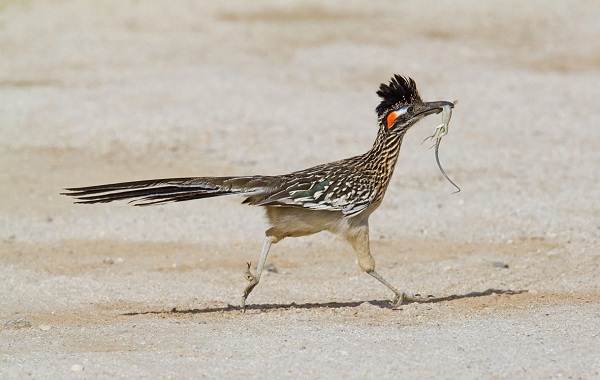 The larvae. A bright representative is the Brazilian liqueur Ani. It is often found on the American continent not far from pastures, where a forage base of insect parasites is always provided. Notable is a powerful beak of small size, flattened on the sides. 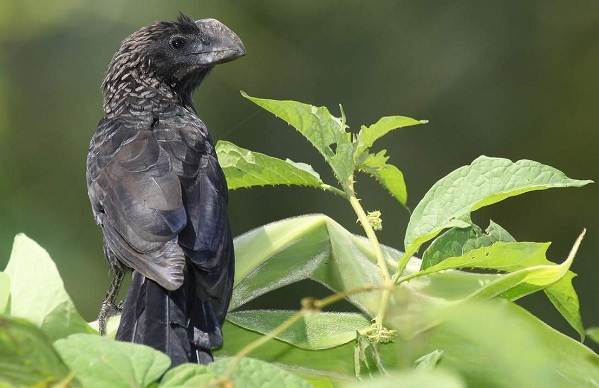 American cuckoo. They differ in size, but all have long tails, strong legs, graceful shapes. Podhvoste often painted in black and white pattern. They build their own nests, rarely parasitizing others. 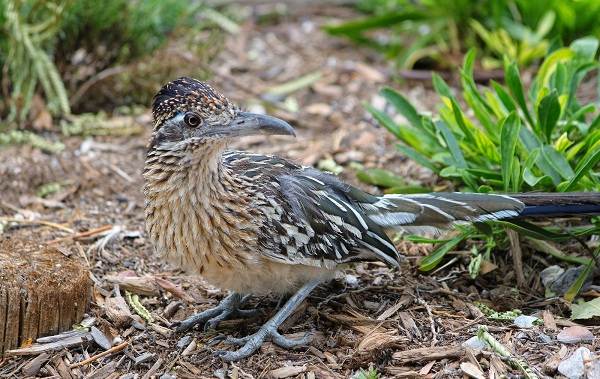 The real cuckoo. Distributed in Eurasia in spring and summer. Winter is spent in Africa. Bristly, white-headed, crested, giant, drong and other species belong to this large group.

The most common of these is the ordinary cuckoo. Which bird of the genus parasitizes more than others, it is difficult to determine, but they all throw eggs into the nests of other birds. 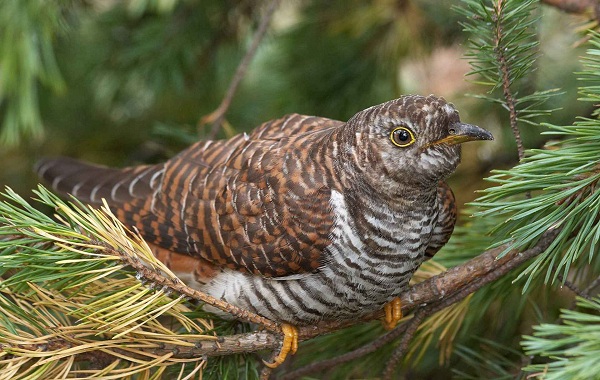 Birds have chosen many habitats covering almost the entire globe, except Antarctica and Antarctica. Cuckoo has spread massively on the American continent and in Eurasia.

Attracts birds a warm climate and territories with extensive deciduous forests. They do not like dense taiga with impenetrable thickets of dark coniferous plants. In many sparse forests, most species of cuckoos have mastered the upper tiers of trees, only some have lived on the forest-steppe. Evolution gradually adapted birds to open spaces.

Determine whether a cuckoo is a migratory bird or not, it is possible at the place of its nesting. Those species that hatch nestlings in the temperate zone, fly over to winter in Africa, China, India. Birds of North America wander to Argentina. 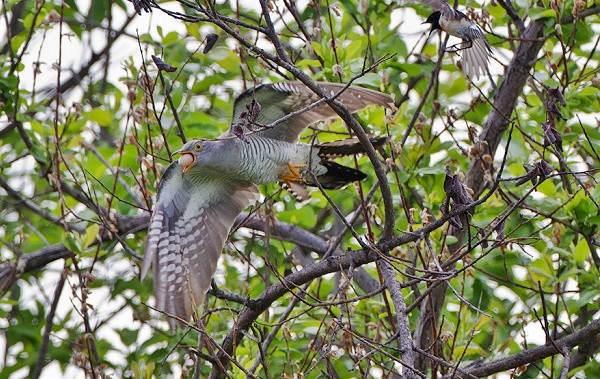 In seasonal flights, cuckoos overcome more than 3,000 km without rest, the total distance from the nesting grounds reaches 6,000 km. Tracking migrations is difficult because of the secret existence of birds. In flocks of cuckoos do not get off.

They fly slowly, they save strength. Wintering in the southern regions lasts about 3 months. In the tropics the cuckoo is a wintering bird, sedentary.

Despite the prevalence of cuckoos, it is difficult to observe them. They lead a solitary life, only the time of reproduction draws them to each other. Feathers perfectly know the forest and the birds that inhabit it. The territory survey is measured in hectares. 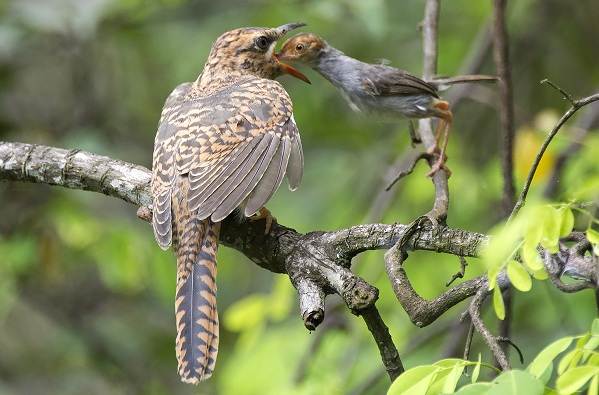 Being a nesting parasite, the mysterious bird cuckoo selects adoptive parents for his offspring. Hundreds of species of birds have become custodians involuntarily. The cuckoo itself is not bothered by the construction of the nest or the hassle of nesting chicks. It is not by chance that the name of the bird became a household name for the grieving mothers who abandoned their own children.

Among the many species are many tropical cuckoos, which are quite capable of feeding and rearing offspring. Therefore, it is not necessary to count all birds as parasites. The public benefit of birds is in the destruction of forests and garden areas from harmful insects and caterpillars.

The diet of omnivorous cuckoos mainly consists of a variety of organisms, but also includes plant food. Despite the small size, birds are very hungry. This is due to the accumulation of subcutaneous fat, which is necessary for long-distance flights during the winter migration period. 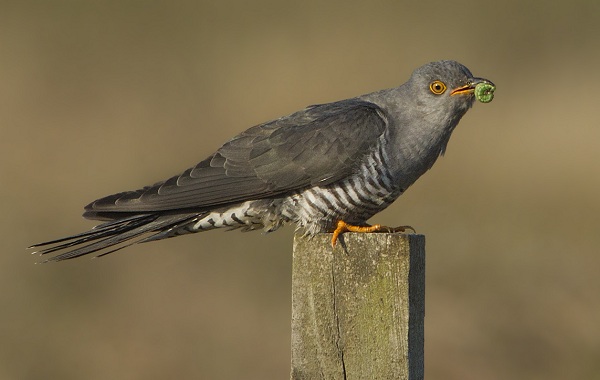 The destruction of a large number of insects by birds is an important factor in protecting the ecosystem. Only during the breeding season does the appetite of forest goers fall. The life of a cuckoo bird is filled with active searches of a pair for breeding offspring.

Active mating of males begins in April, lasts until August. The duration of the nesting period is explained by the attachment of cuckoos to other birds, on which their parasitism extends. Counting, in the nest of which birds the cuckoo lays eggs, shows that there are at least 300 species on the list. 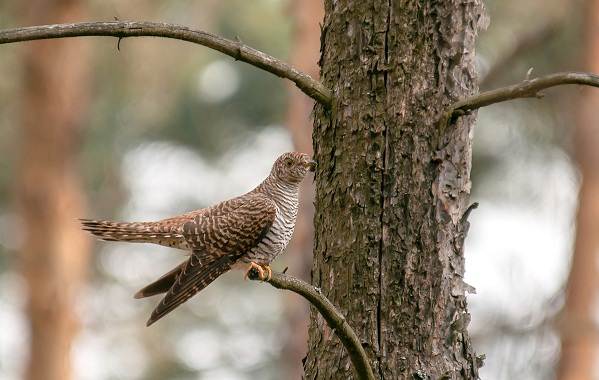 The choice often falls on small species of birds: white wagtail, finch, reed, flycatcher, garden redstart, zaryanku, forest devil, reel. Nesting specialization is extensive. Common signs of bird-educators are the shape of the nest, its location, the feeding of the chicks through the insertion of food into the beak.

An adult cuckoo remembers his adoptive parents and finds a nesting place for the peculiarities of the couple’s behavior during the mating season. The male cuckoo, like a hawk, circling above the chosen nest and forcing the bird to leave it.

The female, ready to be laid, is controlled for 10-16 seconds, leaving its and taking away another’s egg, i.e. having made a substitution. 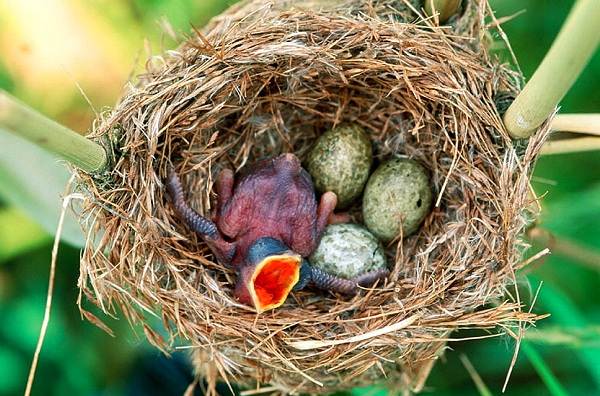 It happens that there are already well-bred eggs in the clutch, the kukushino does not have enough time to develop the embryo. Then the female eats up all the masonry in order to force a couple of adoptive parents to reproduce again.

During the seasonal period of reproduction of eggs, cuckoos fall into different nests, but it happens that different females make substitution in one place. The size of eggs, as a rule, is greater than in the laying of bird-educators. The drawings are diverse, the color can be white, bluish, purple or spotted.

The incubation period is 11-12 days. If the chick appears before other pets, then it gets a noticeable advantage among others in the struggle for survival. His behavior is aimed at ousting eggs from the nest and hatched chicks. 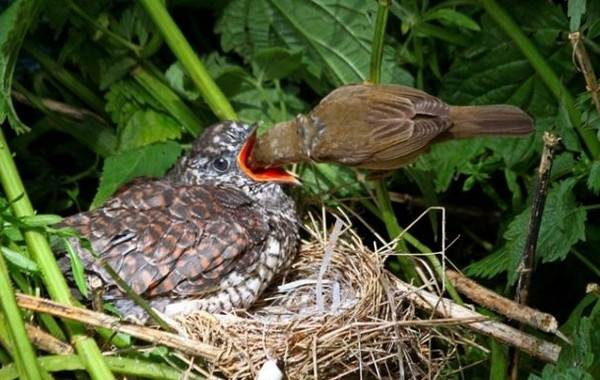 Even if he is still blind and naked, he is pushing his neighbors out of the nest with his back. The belated appearance of cuckoos does not prevent the conduct of the same struggle until the complete elimination of competitors.

Some species of birds recognize alien eggs of parasites, get rid of them. But cases of getting rid of the baby cuckoo are not fixed. Kukushata publish urge to feed, similar to the parents’ native chicks.

This vocal technique helps them survive. After three weeks, complete plumage of the chicks is completed, after 40 days, an independent existence begins, approximately 10 years in length.