Many have heard that the largest animal on our planet is considered to be the blue whale . But not everyone knows that there are creatures that exceed its size — this is an ocean dweller of the jellyfish Cyanea . 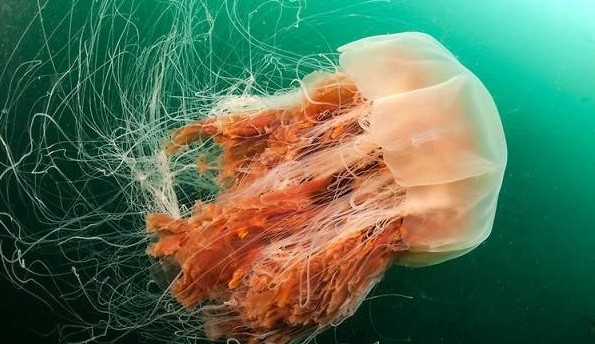 Description and appearance of cyanea

Arctic Cyanea belongs to the species of cyphoid, order disomeduz. Translated from the Latin jellyfish Cyanea means blue hair. They are divided into two types: Japanese and blue cyanea.

It is the largest jellyfish in the whole world, the size of cyan is just gigantic . On average, the size of the bell of Cyan is 30-80 cm. But the largest registered copies were 2.3 meters in diameter and 36.5 meters in length. A huge body is 94% water.

The color of this jellyfish depends on its age — the older the animal, the more colorful and brighter the dome and tentacles. Young specimens are mostly yellow and orange in color, with age they turn red, turn brown, appear purple hues. In adults, the jellyfish dome in the middle turns yellow, and at the edges reddens. Tentacles also become different colors. 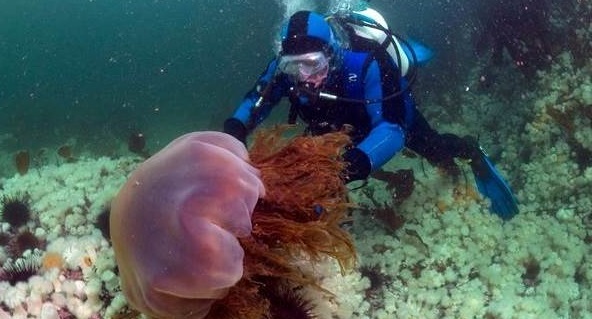 In the photo is giant cyane

The bell is divided into segments, a total of 8. The shape of the body is hemispherical. The segments are separated by visually beautiful notches, at the base of which are arranged the organs of vision and balance, olfactory sense and light receptors hidden in the ropalia (marginal bodies).

Tentacles are collected in eight beams, each of which consists of 60-130 long processes. Each tentacle is supplied by nematocysts. In total, the jellyfish has about one and a half thousand tentacles that form such thick “hair” that Cyanea is called “ hairy ” or “lion’s mane”. If you look at the photo of Cyan , it is easy to see a clear resemblance.

In the middle of the dome is a mouth, around which hang red-crimson mouth lobes. The digestive system implies the presence of radial channels that branch from the stomach to the marginal and oral parts of the dome. 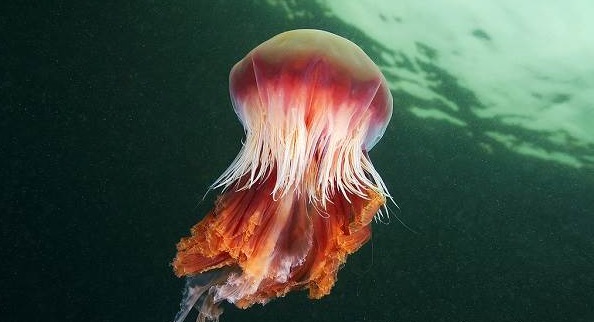 In the photo the Arctic jellyfish Cyanea

As for the dangers of cyania for a person, there is no particular concern here. This beauty can sting you, not stronger than nettle. There is no question of any deaths, maximum burns will provoke an allergic reaction. Although large areas of contact will still lead to strong discomfort.

The jellyfish of Cyanea lives only in the cold waters of the Atlantic, Arctic and Pacific Oceans. Found in the Baltic and North Sea. Many jellyfish live on the east coast of the UK.

Large clusters were observed off the coast of Norway. The warm Black and Azov Seas do not suit her, as do all the waters of the southern hemisphere. Live at least 42⁰ north latitude.

Moreover, the harsh climate only benefits these jellyfish — the largest individuals live in the coldest waters. This animal is also found off the coast of Australia, sometimes falls in temperate latitudes, but does not survive there and grows no more than 0.5 meters in diameter. 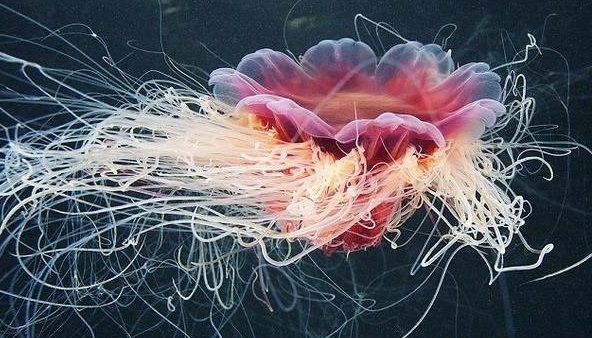 Jellyfish rarely swim to shore. They live in the water column, swimming there at a depth of about 20 meters, surrendering to the will of the stream and idly moving tentacles. Such a large mass of tangled, slightly burning tentacles becomes home to small fishes and invertebrates that accompany the jellyfish, finding protection and subsistence under its dome.

As befits a jellyfish, tsianeya no different sharp movements — it just floats down the river, occasionally reducing the dome and the waving tentacles. Despite this passive behavior, for jellyfish, Cyanea is fairly speedy — it is able to swim several kilometers per hour. Most often, this jellyfish can be seen drifting on the surface of the water with straightened tentacles that form a whole network for catching prey. 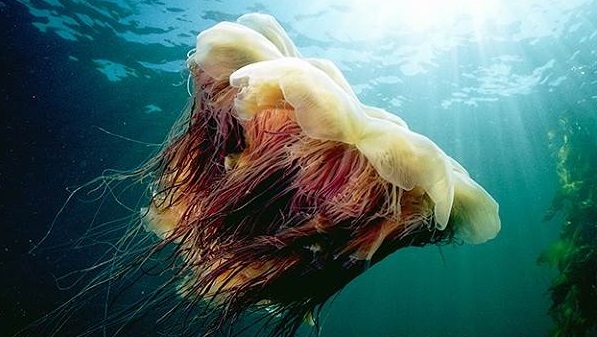 Predatory animals themselves, in turn, are objects of hunting. They feed on birds, large fish, jellyfish and sea turtles. During the medusoidal cycle, the Cyanian dwells in the water column, and when she is still a polyp, she lives on the bottom, attaching to the bottom substrate.

Blue-green algae is also called Tsianei . This is a very ancient group of aquatic and terrestrial organisms that includes about 2,000 species. They have nothing to do with jellyfish.

Tsianeya refers to predators, and quite voracious. It feeds on zooplankton, small fish, crustaceans, scallops, smaller jellyfish. In the years of hunger, it can go without food for a long time, but at such times it is often engaged in cannibalism.

Floating on the surface of tsianeya resembles a bunch of algae , which swim and fish. But if the prey touches its tentacles, the jellyfish sharply throws a portion of the poison through the stinging cells, wraps the prey and moves it in the direction of the mouth.

The poison is released over the entire surface and the length of the tentacle, the paralyzed prey becomes a dinner for the predator. But still, the basis of the diet is plankton, a variety of which can boast the cold waters of the oceans.

Often, Cyaneans are going to hunt by large companies. They spread their long tentacles into the water, thus forming a dense and large living network. When a dozen adult individuals are going to hunt, they control hundreds of meters of water surface with their tentacles. It’s hard for mining to slip unnoticed through these paralyzing networks.

The change of generations in the life cycle of cyanea allows it to multiply in various ways: sexually and asexually. These animals of different sexes, males and females perform their functions in reproduction.

Cyanean heteropoly individuals differ in the contents of special gastric chambers — the spermatozoa of the male in these chambers and the egg cell of the female. Males release sperm through the oral cavity to the external environment, while females in the oral lobes have brood chambers.

Sperm enters these chambers, fertilizes the eggs and there is further development. Hatching planuly swim out and swim in the water for several days. Then they attach to the bottom and turn into a polyp. This scyphoistoma actively feeds, grows over several months. Later, such an organism can multiply by budding. Child polyps are separated from the main one.

In the spring, polyps are divided in half and ethers form from them — the larvae of the jellyfish. «Kids» look like small eight-pointed stars without tentacles. Gradually, these babies grow and become real jellyfish.