The most interesting rodent from the squirrel family: in contrast to the forest dwellers, it lives in earthen holes; like a groundhog or gopher , but barks like a dog. 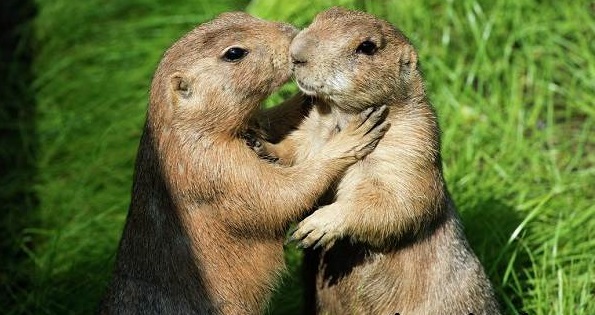 In the wild was subjected to large-scale destruction, and now tamed as a pet. The way of life of prairie dogs is similar to the organization of the human community.

The animals have chosen the desert-steppe western territories of North America, central Mexico. They are attracted to dry grassy plains with ponds nearby, foothills. They don’t like wet soils and lowlands.

Information about the appearance of prairie dogs in Siberia , Altai species was wrong. Scientists identify five types of these rodents, each of which has chosen its own plot for living, color and style of fur coats and seasonal classes. 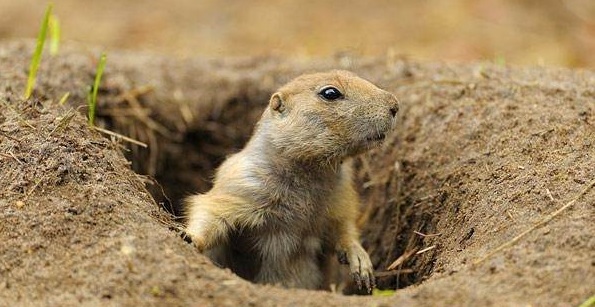 White-tailed, Mexican, and Uta dogs are known, black-tailed representatives are especially popular. In addition, they distinguish Gunnison’s dogs. The inhabitants of the prairies disliked farmers for damage to land and mass resettlement, affecting the nature and increasing food competition in the habitat.

Before the campaign for the destruction of cute rodents totaled up to 100 million individuals. For the current period, less than 2% of the previous population residing in protected areas remained. Adult representatives of prairie dogs grow up to 30-35 cm and 1-2 kg in weight, which varies depending on the season.

Females are slightly smaller than males. The animals were called doggies for characteristic sounds, similar to puppy barking.

Listen to the voice of prairie dogs

Rodents are excellent diggers, strong paws with powerful claws are adapted to dig burrows in dry ground. Color coat from gray-brown to light beige on the abdomen. Large, widely spaced eyes on a rounded head with ears hidden by thick fur. The tail is small and fluffy.

Prairie dogs live in large colonies of several thousand individuals. In the underground labyrinth there are many separate areas for the life of individual families. The laws of hierarchy and order operate in a society of intelligent and hardworking animals.

Nora form complex tunnels, first in inclined corridors, and then in branches with a variety of premises for various purposes: storage rooms, nesting, shelter from predators or flooding, even separate toilets. 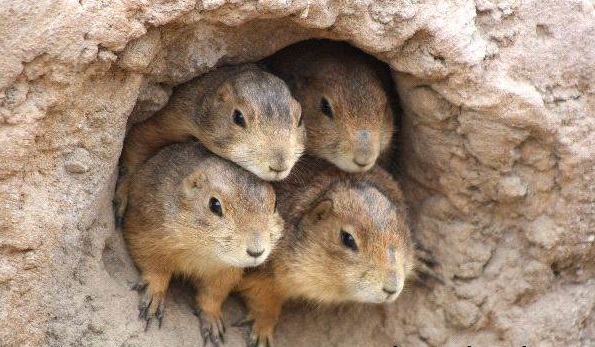 The length of such a labyrinth can be up to 350 meters in length and reach up to 5 m in depth. On an area of ​​1 ha of the territory inhabited by dogs, one can count more than 50 exits from the underground mansion.

On the surface, an annular shaft of excavated earth is formed, which serves as a barrier against flooding and a watchtower for possessions protected from enemies. Meadow doggives have to defend themselves from foxes, snakes, badgers , coyotes , hawks attacking from above, falcons and golden eagles .

The nature and lifestyle of prairie dogs

In the town of prairie dogs there is a social structure. Each individual family consists of the head of a male, 3-4 females and two year old offspring, in total up to 20 individuals.

The family is provided with separate housing, including «children», where babies are given birth and fed. Male defenders always guard their home and fight for it desperately. 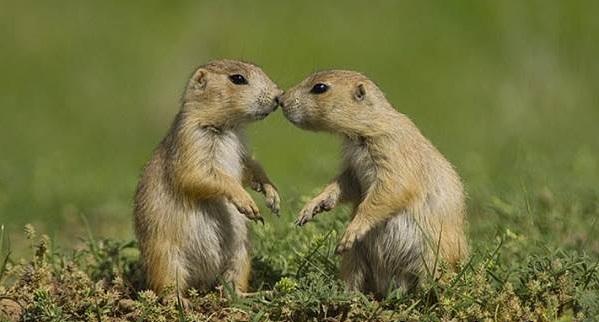 Outsiders — neighbors are driven out patiently and persistently, avoiding physical struggle, only the most recalcitrant can be destroyed. In the community, the functions are strictly distributed:

Performing work and the ability to communicate in their own language distinguishes prairie dogs as especially gifted social animals. Animals do not just bark and hit their tails at the same time, the ways of transmitting information are so diverse that scientists compare them with dolphin language or with the level of communication of primates.

So, for example, the prairie dog can convey by voice and posture not just a threat message, but clarify who is coming, from which side and how. 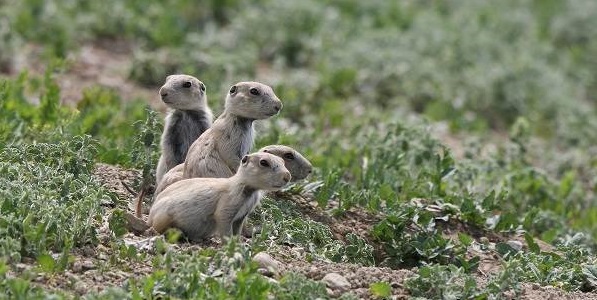 Therefore, actions when approaching a hawk, badger or coyote are different: they either hide themselves rapidly, but they keep at the exits, or go deep into, or only cautiously move closer to the burrow.

The high activity of dogs is manifested during the day: they work, they manage in the burrows, houses, they are friendly, they help each other, they play with the little ones. The sentry on its hind legs stands on the earthen wall and overlooks the surroundings.

Grass over the town animals are eaten for better viewing. Others clean fur coats, build new toilets to replace old ones, babysit with their neighbors younger children, while mommy is busy with the younger generation. Among the closest in the family there is a ritual of «kiss», the contact with open mouths. The relationship of relatives here is trustful and caring. 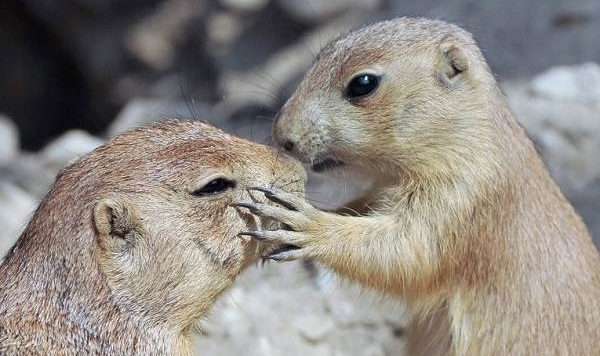 The black-tailed prairie dog does not hibernate, like other species of congeners. Able to move in the snow. «Sleeping» animals from August to March heat idle.

At the heart of the diet is a variety of herbs growing near the habitat. Fodder becomes flowers, leaves, buds and shoots of plants, seeds, fresh fruits, nuts. For food competition with livestock, prairie dogs were forced out of inhabited places. Atypical food of rodents can be worms and insects, which do not disdain animals.

They do not store for winter, food is eaten on the spot. In contrast to many other rodents, meadow dogs do not acquire storerooms , and in winter they feed on any available vegetation, if they do not fall into hibernation. 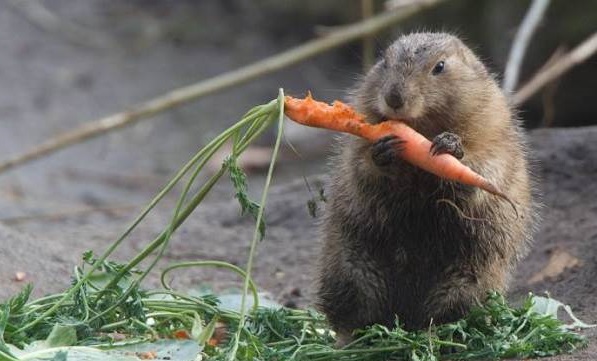 In early spring, the period of marriage. Offspring harvested within 28-32 weeks. The female once a year brings litter from 4-7 puppies. Kids appear naked and blind, only a month later they open their eyes.

On the sixth week, the first forays from the hole begin, a manifestation of independence. They cease to depend on mother’s milk and begin to eat plant foods.

Caring parents to young dogs can leave their homes, and themselves build a new one nearby. Young animals reach sexual maturity by 2-3 years of age. Adult males create their family, and females can remain in the parent. 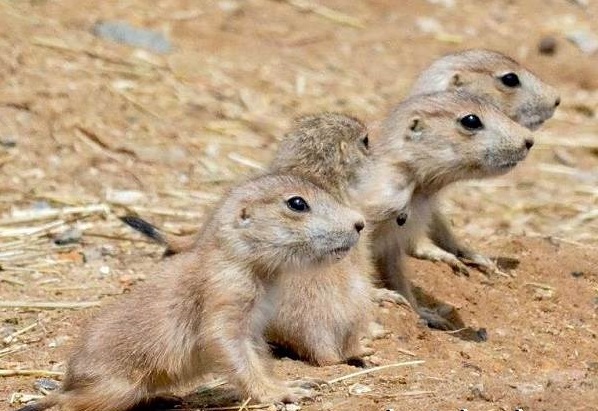 In nature, animals live up to 5-7 years, and in captivity a little longer, provided proper care. Buy a prairie dog and take care of it is not difficult. Animals are tamed easily and then do not attempt to escape to the will. Animals become sociable and affectionate pets.

Snow leopard animal. Way of life and habitat of a snow leopard