Daphnia belongs to branched crustaceans, this genus of small crustaceans has more than 150 species. Any self-respecting aquarist knows what daphnia crustaceans look like , as they are a popular food for many species of aquarium fish. 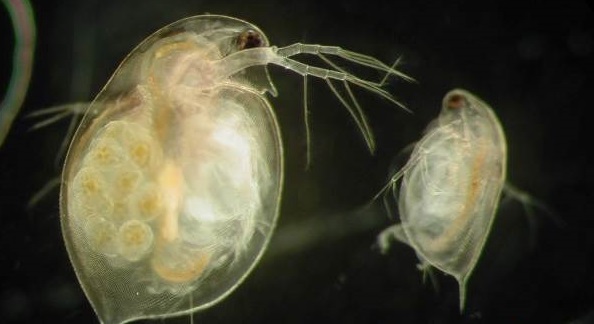 Features and habitat of daphnia

Depending on the type of daphnia , their size can vary from 0.2 mm to 6 mm, so it is possible to study the structure of daphnias only under a microscope. The body of these crustaceans has an oval shape, it is covered with a special shield of two wings (carapace) that protects the internal organs.

The head is also covered with chitinous shell and has a beak-like outgrowth (rustrum), under which the front antennas are located, which perform the olfactory function.

The size of the rear antennas is much more impressive, compared to the front ones, their main task is the movement of daphnia. Daphnia pushes away from the water and flies at the same time with both antennas, making sudden jumps. For this feature, common daphnia is often called the «water flea». 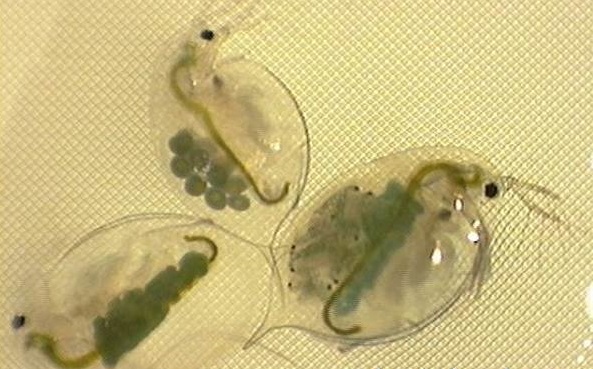 On the head of the crustacean there is a faceted eye, an unpaired organ responsible for vision. The number of facets depends on the species and ranges from 22 to 300. For predatory representatives, the structure of the eye is more complicated and the facets are larger. Naupal eye is located just below the facet.

Daphnia’s thoracic legs , covered with a multitude of bristles, serve as a kind of filter through which the crustacean passes single-cell algae and bacteria suspended in water. Legs make up to 500 strokes per minute.

Photos of daphnia , taken at high magnification, make it possible to consider well the internal structure of the crustacean. Thanks to the translucent shell, the heart, the intestines are clearly visible, and in females — a brood bag with several embryos.

Daphnia of one species or another can be found in almost any standing reservoir — from a small pond to a deep lake. Some representatives of this kind of crustaceans exist in Eurasia, and South and North America, and even in Antarctica. 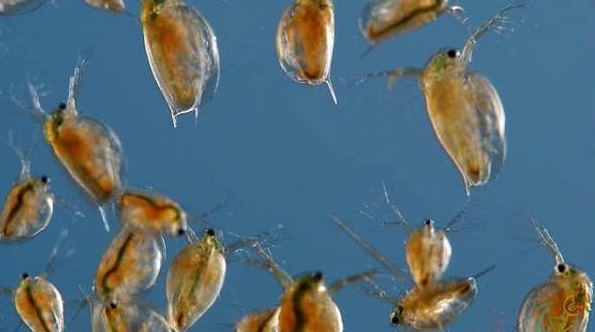 An important factor in their normal existence is standing water, in which there is a minimum number of soil particles. Getting into the running water, daphnias filter the soil along with algae and gradually clog their intestines.

Eaten grains of sand accumulate and do not allow the crustacean to move normally, soon it dies. Daphnia is extremely sensitive to environmental pollution, which is why it is often used to check the quality of water in reservoirs.

The nature and lifestyle of daphnia

Daphnias prefer most of their lives to be in the water column, where they continuously filter water saturated with single-cell microorganisms. Some species keep near the bottom, feeding on the remains of invertebrate animals and dead plant parts. In the same way, daphnia is experiencing winter cold, if it does not hibernate.

Blue-green algae, yeast and bacteria are the main food of daphnia. The highest concentration of single-celled algae is observed in the “flowering ponds”; there, in the absence of a large number of fish, daphnia lives and reproduces well, especially intensively.

Interesting reproduction of daphnia — the class of crustaceans is characterized by such a feature as parthenogenesis. This is the ability to reproduce offspring without direct fertilization.

When the living conditions of this species of crustaceans are quite favorable, the females of daphnia breed by means of parthenogenesis, giving birth to only female individuals.

On average, one individual gives offspring in the amount of 10 nauplii, which in turn become capable of reproduction as early as 4 days after birth. For the period of life the female daphnia brings posterity up to 25 times.

When environmental conditions deteriorate, males are born, and the next generation of crustaceans will reproduce the eggs that need to be fertilized. Daphnia eggs , formed during such a period, grow into small embryos, they are covered with a special protective shell and hibernate.

In this form, daphnia embryos can survive both drought and severe frost. When environmental conditions return to normal, they develop into adults. The next generation will reproduce again only females that will be capable of parthenogenesis. Another interesting feature of daphnia is cyclomorphosis. In different seasons of the year, individuals of different body shape are born in the same population. 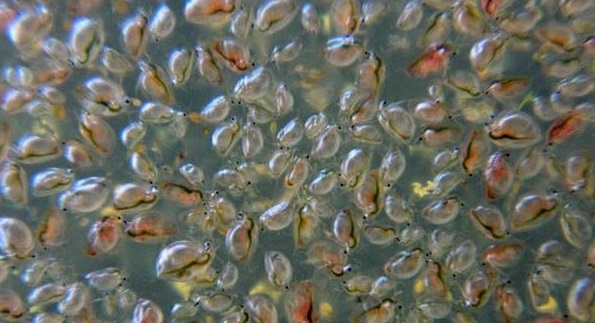 So, summer generations of Daphnia have an elongated tail needle and growth on the helmet. Among the many hypotheses about the feasibility of such changes, the main one is considered protection against predators that are more active in the summer period.

Daphnia have a short lifespan of 3 weeks to 5 months, depending on the species. Large species such as Daphnia Magna live longer than their smaller counterparts. The life of daphnia also depends on the temperature of the water — the higher it is, the faster the metabolic processes take place, the body develops faster, ages faster and dies.

Daphnia price in the form of feed

Along with other crustaceans, daphnia and gammarus are bred for commercial purposes. Breeding Daphnia at home does not bring much trouble. It is enough to take a plastic or glass container, connect aeration and create conditions for good reproduction of blue-green algae — good illumination and stable temperature. 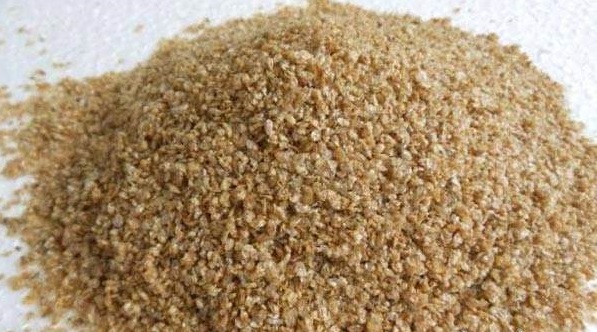 In the photo dry daphnia for fish

Live daphnia, frozen and dried — an excellent food for the inhabitants of the aquarium. Dry daphnia for fish is a good source of protein, because its content exceeds 50% of the total mass of feed.

Gammarus, Artemia, Daphnia — food more than affordable. Thus, the packaging of dried Gammarus or Daphnia with a volume of 100 ml will cost no more than 20-50 rubles, frozen — a little more expensive — 80-100 rubles. Live food is also not uncommon in modern pet stores, but they are stored for a short time and differ little in nutritional value from frozen counterparts.