Rabbits — a common breed for keeping in the middle lane. Unpretentiousness to living conditions, a wide ration of food, excellent taste characteristics of meat and fluffy fur form the popularity of the subspecies. 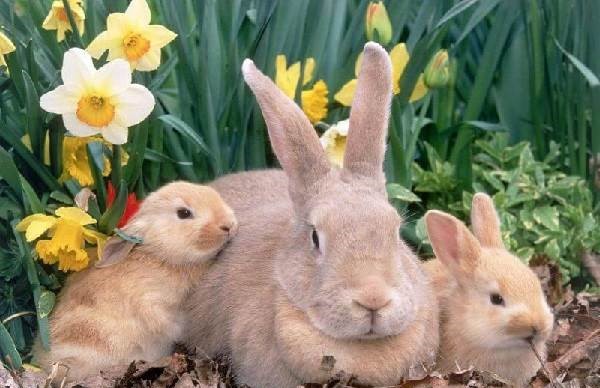 Among the main drawbacks it is necessary to note the weak resistance to infections, a high level of lesion of the heads and increased mortality rates.

Distinguishing a sick individual from a healthy one: a detailed description of the procedure

The course of the disease in a rabbit can take place in a latent (hidden) form, it is impossible to identify an individual affected by a virus at the initial stage. But in most cases, visual inspection to notice the changes and the first signs of pathology is not difficult.

Important! Regular inspection, probing and self-diagnosis of livestock is the first step towards minimizing the number of diseased.

Key indicators that indicate a normal state include:

• uniform distribution of wool, lack of shreds, healthy luster of the cover;

• even breathing (no more than 60 breaths per minute at normal air temperature);

• temperature not higher than 39 degre 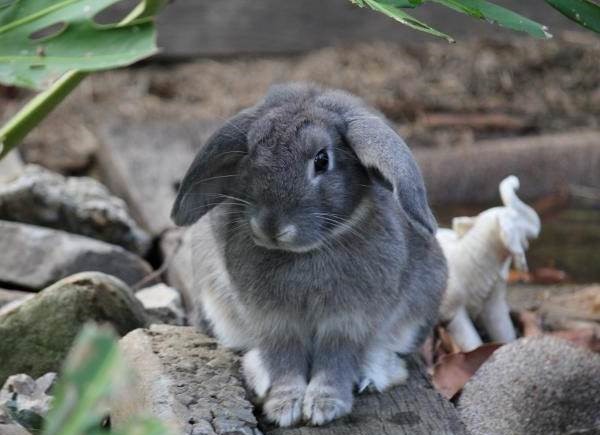 Attention should be paid to waste products. The condition of feces and urine talks about pathological processes in the body. The feces must be brown or black in color, the urine must be thick and dark.

The list of possible diseases is divided into 3 groups: invasive, infectious and non-infectious. The first type is caused by parasites (mites, helminths).

The disease is invasive in nature. The variety of symptoms, which indicates the infection of an individual with helminths, allows for a timely diagnosis.

Sick rabbits lose weight, they are inactive and remain in the depth of the cage (do not run up to the owner). Wool becomes dull, in some cases it falls out. On examination, you can notice a darkening of the mucous membrane of the eye and mouth. 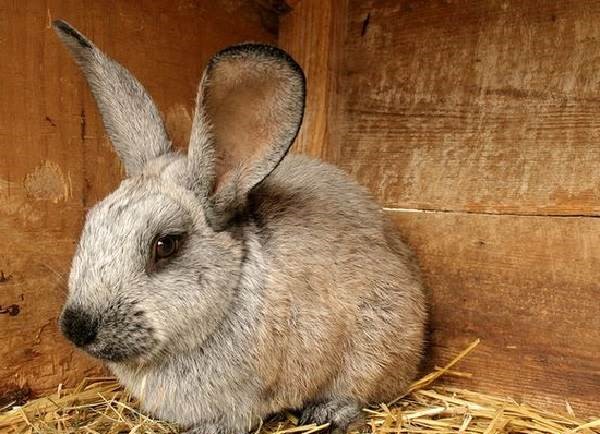 Note! Being in the internal organs, worms reproduce toxic substances. The feces of sick pets are the main reason for a possible epidemic. Feces need to urgently destroy.

Detection of cysticercosis at the initial stage allows you to remove the parasites and prevent slaughter. If the individual is not treatable, it is necessary to slaughter it and feed the meat to livestock after careful processing.

There are two forms of the course of the disease. With typical pasteurellosis, the microbe enters the lymph nodes, which leads to a general infection. The clinical picture is a rise in temperature during the development of the disease and a sharp decrease before death, frequent breathing, conjunctivitis, gray discharge. Typical pasteurellosis is fatal in 100% of cases.

Atypical form is characterized by a less intense manifestation of symptoms and a long course. Under the skin wounds appear, which after three months open up on their own, and pus flows out. Individuals with strong immunity recover on their own. 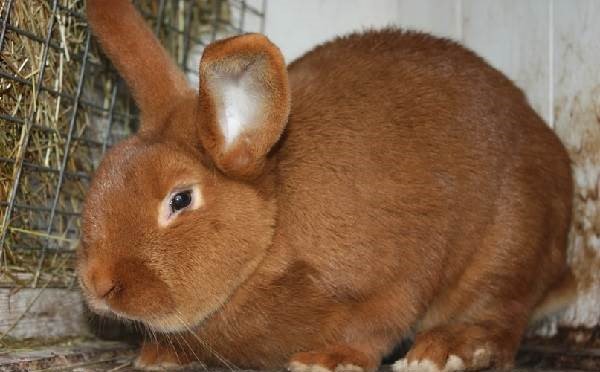 The typical nature of the disease requires mandatory slaughter. Places of contents and inventory to be sanitized. Manure, litter, remnants of feed to destroy, carcasses of rabbits to burn. Meat recovered individuals to eat only after heat treatment.

The causative agent is tick bite. The lesions are the scalp or the inner part of the ear. Symptoms are irritation of the dermis and the appearance of bubbles, which later burst and form scabs. 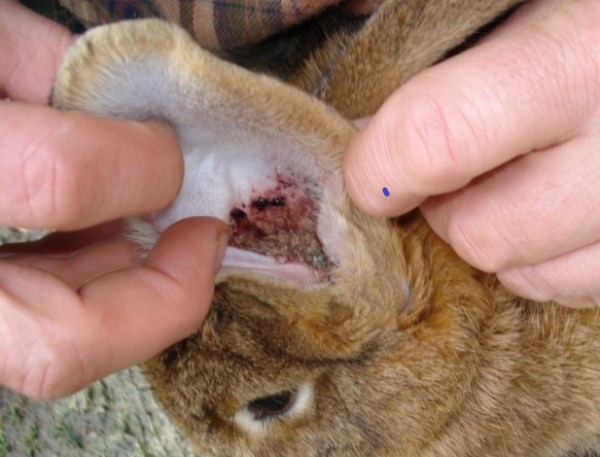 Home treatment involves the lubrication of crusts with turpentine, and after soaking — their removal and burning. Feed the sick rabbit must be separate, meat can be taken in food. The disease does not pose a threat to human health.

With the acute course of the animal, the temperature rises, the pulse quickens. The general condition is apathetic, there is swelling of the eyelids. Anemia develops. 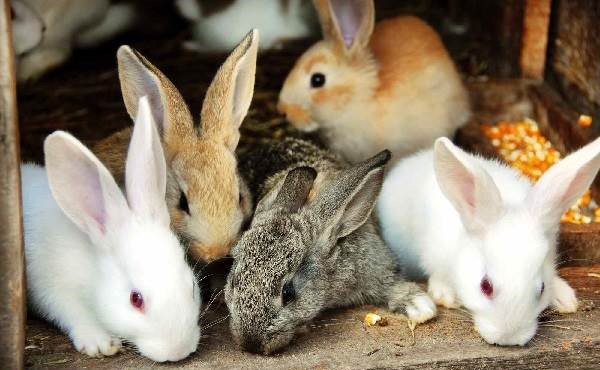 Chronic form leads to fading of hair, baldness of certain areas. The clinical picture includes frequent disorders of the bowels (diarrhea, constipation), yellowing of the mucous membrane of the eye. If pregnant rabbit become infected with fascioliasis, an abortion is required.

The virus entails the rejection of sick individuals, their slaughter. Bury or burn corpses to get rid of the spread of a dangerous virus. Particularly prone to suckling females and newborns.

The causative agent is the eggs of Listeria (rodents are introduced). The clinical picture is the central nervous system damage, miscarriages, the birth of a dead fetus, the high mortality of newborns rabbits.

It is expressed by nodules and edemas. The first case is characterized by local formation of growths on the body, which later spread over the skin. The second case has a feature in the appearance of edema and covering a larger area. 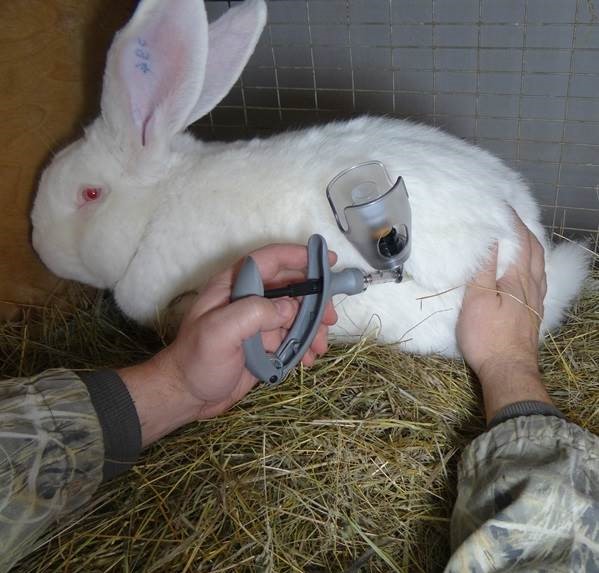 The place of formation of tumors (mixot) is the head, genitals, anus. Another sign is inflammation of the mucous membrane of the eye. The body of the rabbit begins to become covered with ugly growths. Death occurs in 10 days.

Algorithm of actions at detection of infection:

• kill and kill sick individuals; • thoroughly treat the clothes of a person who has been in contact with patients with a disinfectant solution;

• waste products of the crawl buried in a hole, with a depth of one meter;

They carry the inhabitants of the steppes (hares, muskrats, partridges). Transmission of the pathogen occurs through the bites of ticks, mosquitoes, fleas. The disease can be transmitted to man. Symptoms of infection of domestic animals are fuzzy. Sometimes there are no signs (with a latent form).

The clinical picture (based on data after opening) — an increase in the glands, swelling of tissues, filling the lymph nodes with blood, and ulceration of the lungs and liver. Only bacteriological research will help to reveal the disease in a rabbit. To isolate individuals suspected of being infected, to isolate the sick.

The precautions for a person are to maintain good hygiene — regularly wash and sanitize hands, work in a protective coat, open carcasses with gloves.

To isolate the diseased, to treat their places of residence with bleach or a blowtorch flame. Prevention consists in a thorough examination of the livestock at least once a week.

Inflammation of the mucous membrane of the eye occurs due to the ingress of foreign objects (sand, dust, chemicals). The disease occurs due to infection or invasion, the transfer of pathogenic microflora from neighboring organs and tissues. 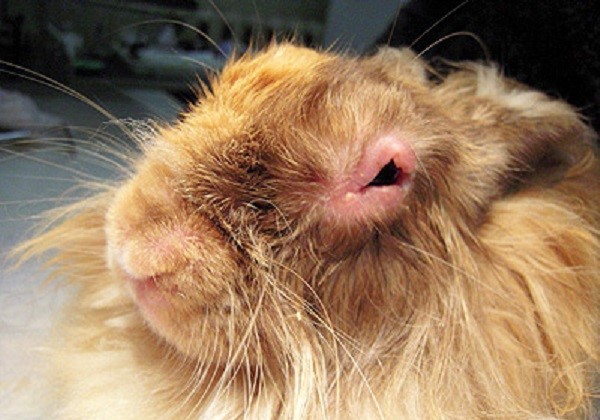 • mucous — closing the palpebral fissure, swelling and redness of the mucous membrane, fear of light;

• neglected purulent form — the discharge of pus is accompanied by the appearance of erosions and ulcers along the edges of the eyelids;

• phlegmonous nature of the disease — severe swelling of the eye.

Treatment consists of cleansing the mucous from secretions by washing. For this you can use potassium permanganate, boric acid, rivanol.

Parasites affect the gastrointestinal tract and cause symptoms of the disease. Development can occur both in the body of a rabbit (no danger), and outside the body (a threat to health). 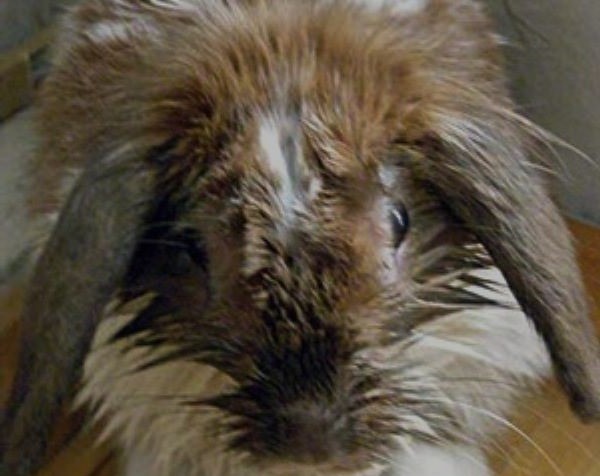 The statistics provide evidence that coccidosis is the cause of death of 70% of the livestock on the farm. It is important to conduct regular prevention and diagnosis.

Intestinal flow is characterized by rapid development of the disease and death on the 10th day. When the form of the liver disease lasts up to 50 days, the animal at this time suffers from diarrhea.

The term of the incubation period is up to three days, the symptom is a liquid table with bleeding. Particularly susceptible to rabbit disease. An accurate diagnosis can be established only after laboratory examination of a patient’s feces.

Occurs under improper conditions of detention. Development factors — drafts, a sharp temperature drop, high humidity levels. Recognize the disease can be on such grounds: 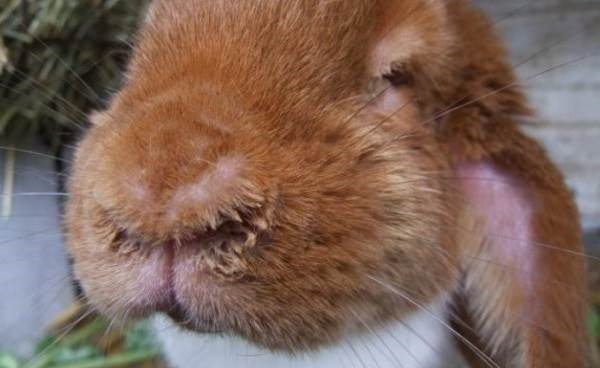 When the first symptoms are found, transfer the sick rabbits to another warm room. Treatment consists of enhanced nutrition and the course of taking antibiotics. It is also important to drink plenty of water. The disease is curable, the meat of recovered rabbits is usable.

Symptoms include poor coordination of movements, copious saliva, diarrhea, and vomiting. Immediately replace the feed, give water. The remedy for treatment is a steep decoction of rice or oats. Also a sick rabbit should be given a laxative.

To exclude mortality and epidemics of livestock, carefully monitor the health of pets. Health, absence of pathologies, reproduction provides the creation of full-fledged conditions for life and attentive care. The main condition and the rule of the breeders — regular sanitization and disinfection.

• frequent washing and cleaning of cells;

• disinfection of drinkers and feeders every ten days of the month;

• pay attention to and form the increased comfort conditions for the rabbit in front of the nick;

Remember that the best way to prevent an epidemic is quarantine. New rabbits, delivered from other places of detention, to keep separately for 21 days.