Features and habitat of the dragon lizard

There are many legends and tales related to dragons in the world, but what if lizards dragons exist in the real world? We present to your attention a flying lizard dragon living on the islands of the Malay Archipelago. The dragon lives in the depths of the island, mainly in tropical forests on the treetops.

This is not large in size lizard, similar to the dragon was called not just. The fact is that, despite their small size, they resemble the very dragons that artists often depict in various science fiction novels and fairy tales.

Biologists have given the name to the lizard draco Draco volans, which means «flying dragon». Adult lizards do not exceed 40-50cm in size.

Due to their small size and ability to fly, they easily overcome long distances, flying from tree to tree. They got the ability to fly thanks to the leather membrane located on the sides, it stretches when flying, and the lizard can stay in the air. 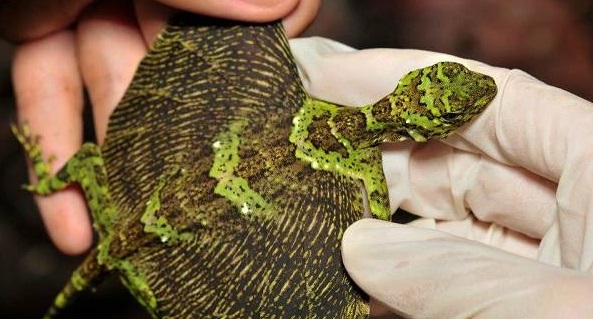 The nature and lifestyle of the dragon lizard

On the skeleton of a lizard you can see enlarged lateral ribs, a very elongated tail, the bone of which gradually tapers at the end.

All this is stretched by a very strong skin membrane, it stretches and straightens during the flight of the lizard, creating an air flow that allows the lizards to plan their flight.

The males near the throat have a special sublingual process stretched by skin, which during the flight helps them to “aim” and a bit resembles the front part of the aircraft.

With its coloring, the dragon lizard perfectly camouflaged in tropical forests, masking allows it to merge with the bark of the tree, making it almost invisible. 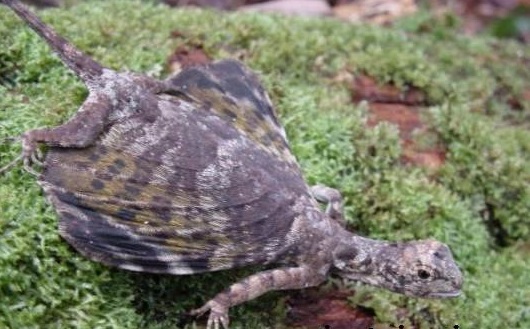 Thanks to its coloring, the dragon lizard perfectly disguises itself in the trees.

Lizard dragon animal is very fast and elusive. Thanks to the innate ability to plan in the air and excellent camouflage, they can rightly be considered excellent hunters.

There are not many species of lizards in nature that have the ability to fly. Dragon lizard is one of the most common. The species itself is very poorly understood, all because they lead a very hidden lifestyle. Due to the fact that almost all the time of their life they spend on the tops of tropical trees, because of this they are almost impossible to see close up.

Due to the fact that the dragon lizard is a small creature, it is a target for many predators, for these reasons the lizard very rarely descends to the ground. This way she protects herself from all sorts of dangers. 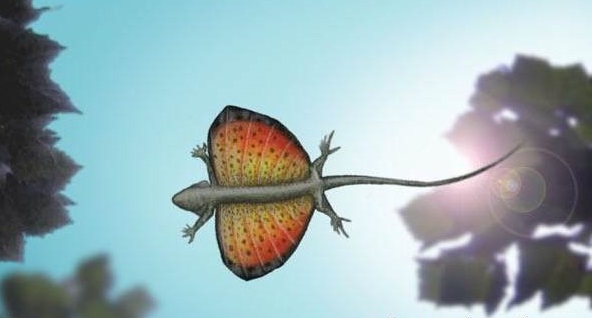 Disguise lizards — another universal tool that allows you to hunt and hide from other predators. When another predator approaches, the lizard freezes on the bark of the tree, thus it becomes almost impossible to notice it.

But if the dragon lizard was still noticed, it easily flies to another branch at a very high speed, so even scientists can not see it during the flight.

The dragon lizard is a predatory animal. It feeds mainly on small insects, various bugs and all small inhabitants of the tropical forest. These are mainly insects that live on trees. They have a very well developed ear, and this greatly improves their hunting skills and strategy.

Lizard hunting zones are strictly divided, so they periodically have clashes over the territory. The territory of this small predator sometimes does not exceed the distance between two trees, to which they fly in search of a butterfly or a small caterpillar.

If a victim is found, it spreads its “wings”, pulls out sharp claws and catches it on an unsuspecting victim. 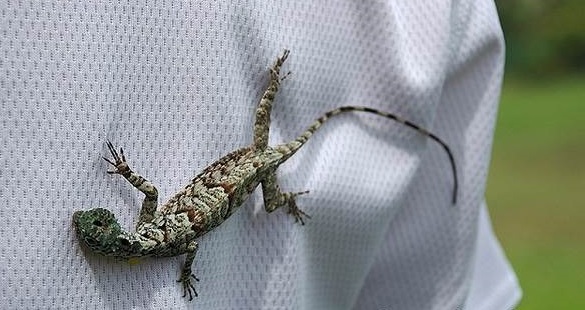 They eat very little, they almost do not need water due to the fact that in their diet it is always enough. He never descends to the earth in search of prey because at the bottom almost always other predators can pull it in, which is not averse to regale on a small dragon.

In addition, the lizard is not suitable for life on earth, and if it accidentally falls on the ground, it immediately climbs a tree.

Lizards dragons are predators of the loner. During the observation of these animals, it was found that they hunt separate individuals all their lives, and each individual has its own territory, the size of the territory does not exceed two or three trees.

Because of their habitat and their small size, they are often the prey of other predators. Lizards are nocturnal and predominantly hunt at night, but sometimes they are followed by hunting in daylight.

Life expectancy in captivity is 2-3 years and is no different from the life of an ordinary lizard, but dragon aquarium lizards live longer. 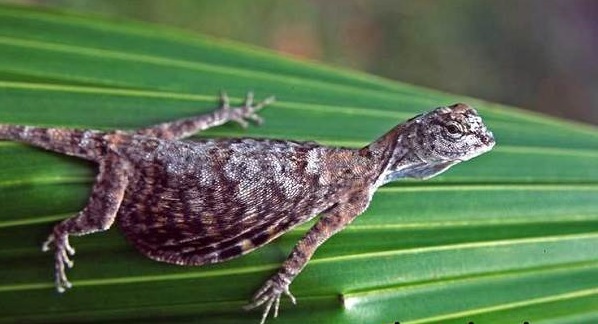 During marital activity, males attract females with their lush growth on the throat. After the female has chosen a male, the couple retires somewhere on the treetops.

When it comes time to lay eggs, if the female does not find a suitable place in the tree, she can go down to the ground. For dragon lizards, this is the most dangerous and crucial period, because on the ground a tree snake or other tropical predator can wait for them.

The most popular place for laying, females are usually chosen in the old, broken tree, or in some other hollow. Until the little dragons hatch out, the female in every possible way protects the clutch from various types of hazards.

Tropical ants, predatory spiders, birds and other lizards can put an eye on the eggs. Therefore, in order to somehow protect the clutch, the female has to build an analogue of a primitive nest.

A month later, little dragons are born. At the first minutes of their life, they are taken for an independent life, they can hunt small beetles and butterflies.

Their ability to fly is genetic, so even from the first minutes of life, they can do the usual habit of adult lizards — hunting and searching for prey.

In pet stores you can see a varied number of different species of dragon lizards. The varied coloring and unusual structure of the lizard make them popular among lovers of exotic animals.

And the maintenance and care of them does not carry anything complicated. They get along well in aquariums and, with proper care, can live much longer than their wild relatives. It is also worth noting that predatory instincts make these lizards quite clever, and some individuals can distinguish the person who cares for them.