Dragonfly is one of the most ancient insects that inhabit our planet. Their distant relatives, who lived more than three hundred million years ago (long before the appearance of the first dinosaurs), had very impressive dimensions, exceeding the size of many modern birds. 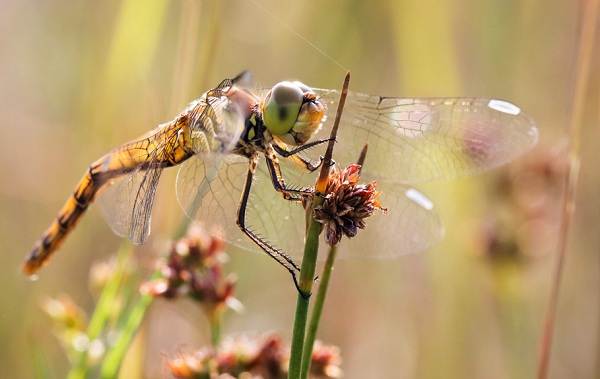 The wingspan of these prehistoric giant insects reached one meter, it’s not for nothing that the name “Dragonfly” is still preserved in English, which literally means “flying dragon”.

In Latin, the insect dragonfly is called «Libella» — small scales. This name is due to the fact that the wings of an insect during flight are similar to the scales.

This insect is very popular among the people, as evidenced by its repeated mention in literature (the famous fable «dragonfly and ant») and in the modern music industry (the song «white dragonfly of love», which has long been on the tops of various charts).

Golden dragonfly, in turn, is considered a powerful talisman that brings good luck. 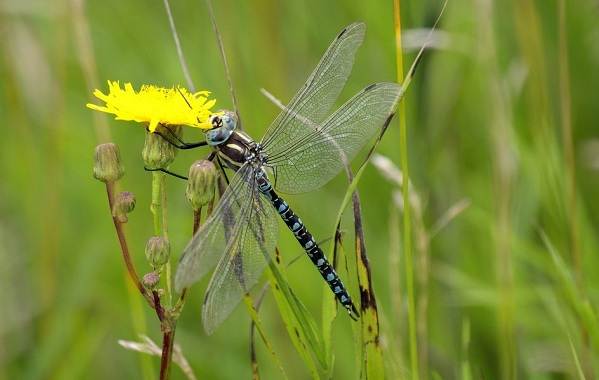 Dragonflies flap their wings about 30 times a minute, so they are not heard zhzhuzhaniya

Features and habitat of dragonfly

The description of a dragonfly is worth starting with the eyes of this insect, which at first glance seem disproportionate and too large relative to the overall body size.

However, dragonflies have a so-called facet vision, which is caused by the presence of several tens of thousands of small eyes, each of which works independently and is separated from the others with the help of special pigment cells.

Due to this strange structure of the eyes, the vision of a dragonfly is much better than many other insects and allows it to see everything happening behind, on the sides and in front and track prey at a distance of up to ten meters. 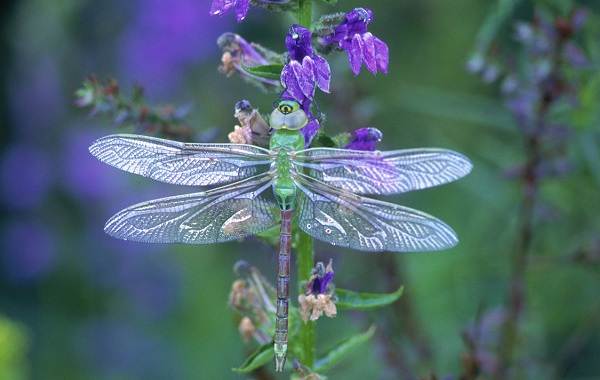 The body of a dragonfly consists directly of the head, the chest part and the extended belly, which ends in a pair of special forceps.

The length of the insect ranges from 3 to 14 centimeters. The color is very diverse and can vary from white, yellow and orange to red, blue and green.

The wings have many transverse and longitudinal streaks, which perform the function of strengthening.

A dragonfly insect is an animal that is one of the champions in moving speed: although the average speed of its flight is usually from 5 to 10 km / h, some species are capable of speeding up to one hundred km / h during long-distance flights. 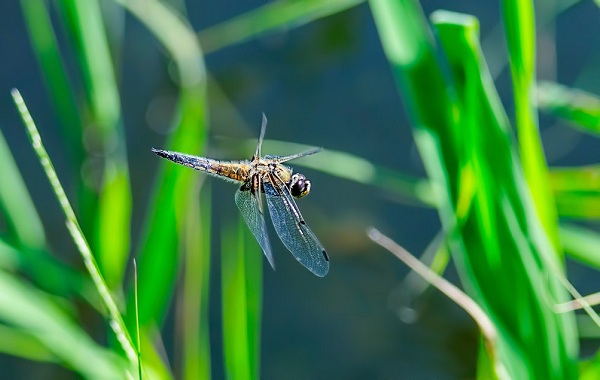 So, in spite of the image of the idly lurching jumper dragonfly, created in one famous fable, the insect is very mobile and leads an active lifestyle.

Dragonflies have three pairs of legs that are covered with a layer of protective bristles. During the flight, the insect’s limbs are folded in the form of a “basket” in order to seize the prey in lightning speed if it is detected. The wings have dark spots that perform the function of protection against vibration.

It is worth noting that the first jet aircraft took to the air due to the fact that entomologist scientists shared with designers and engineers this feature of the wings of dragonflies who used this element in the structure of the aircraft, which would still have crumbled off the ground if would not be dragonflies.

The habitat of dragonflies is very extensive and extends from the territory of modern Europe and Asia to the African continent, Australia and America. 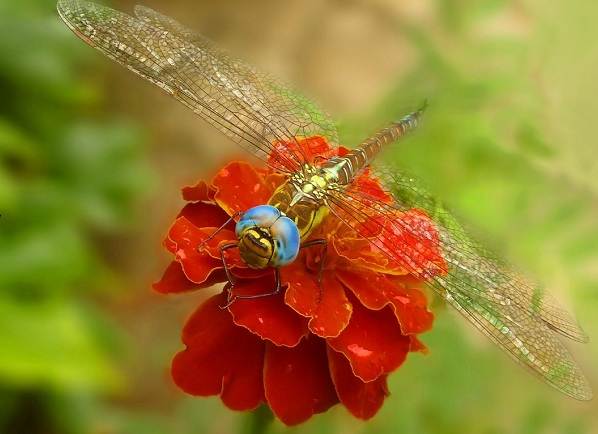 Dragonflies live mainly among the meadows, fields and forest edges. A prerequisite should be the presence of a reservoir nearby.

Character and way of life of dragonfly

Dragonflies are solitary, preferring to hunt on their own. Due to its specific structure of the wings, a dragonfly can hover in the air, making an instant stop, and make flights over long distances, overcoming several hundred kilometers without rest.

During landing, the dragonfly does not fold its wings, like many other insects, but always leaves them in a straightened state.

The main peak of activity falls on daylight, during which dragonflies make flights in search of prey.

In hot hours, they can be observed in large numbers along the banks of reservoirs and above forest edges.

The flight of a dragonfly is notable for its noiselessness, thanks to which the dragonfly can quietly approach the prey. 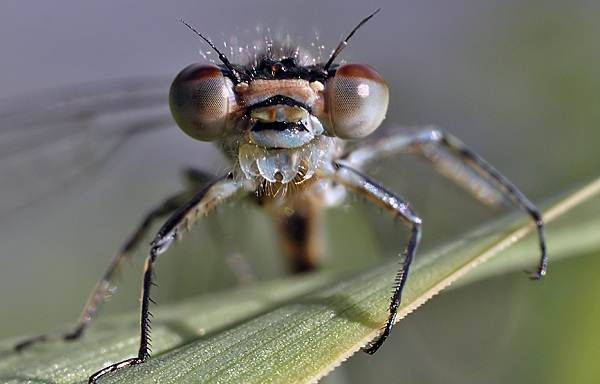 They can make intricate turns in the air, do flips, and even fly backwards. Thanks to this ability, dragonflies can easily get away from predators stalking them.

Today in the world there are about 5,000 species of dragonflies. The main varieties are divided into three orders:

Equal-winged, which include beauties, arrows and hatches. Have an incredibly low weight.

Wings of variety, to which can be attributed such varieties as ortetrum, libelula, sympetrum and rocker arms. In this species, the pair of hind wings has an extended base, which served as the name for this sub-order.

Anisozygoptera is a rare suborder, which is distributed exclusively in countries such as Nepal, Tibet and Japan. Combine the signs of both the above sub-orders.

Pretty girl — lives mainly in the southern regions and regions with a subtropical climate. 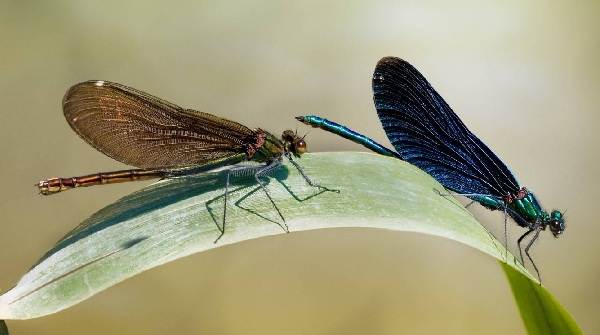 Male and female beauty girls differ from each other in coloring

Females of this species can lay down to one meter deep in water, forming an air bubble around themselves.

They are found exclusively within clean reservoirs, being a kind of indicators of their purity.

Fatima — a rare species listed in the red book. Inhabits the areas of mountain rivers and streams along the sandy coast.

Dedok ordinary — a species inhabiting the territory of modern Europe. It is also found in the Urals and around the Caspian Sea. 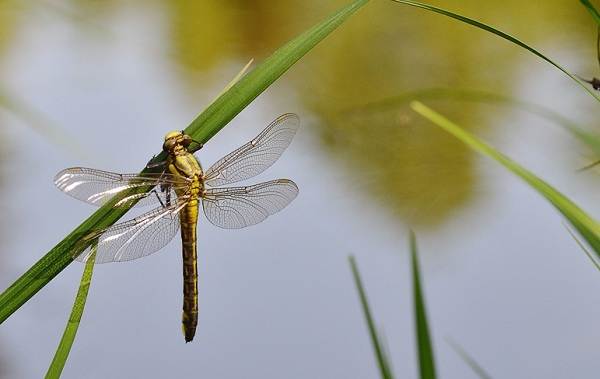 The ant-lion is an insect like a dragonfly, although its flight is rather slow, and its behavior is generally sluggish and unhurried.

What eats dragonfly? As it belongs to predators, the dragonfly eats insects. It grabs small insects with jagged jaws right in flight, large ones with tenacious legs.

In order to hunt for large prey, dragonfly has to fall to the surface of the earth and wait for prey sitting on a blade of grass or a branch.

In the event that the dragonfly spotted its victim directly in flight, it will masterfully repeat the flight path of its prey, after which it will approach it as close as possible and make a sharp jump in order to grab it with its paws.

The dragonfly eats its prey unusually quickly, as it is a very voracious insect. 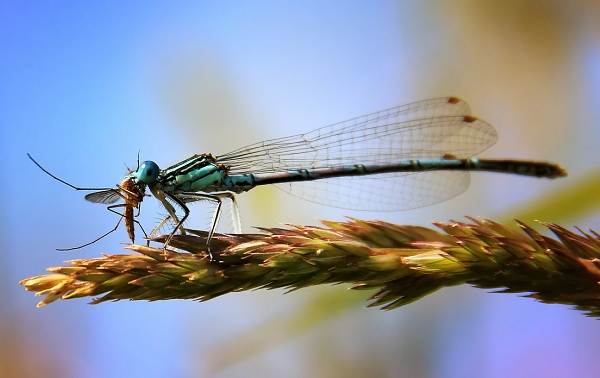 Dragonflies can eat weak representatives of their own species

In one day, she needs to consume a quantity of food that is significantly higher than her own weight, so that her diet per day is several dozen flies, mosquitoes and other insects.

Reproduction and lifespan of dragonflies

Mating of insects of the order of dragonflies occurs on the fly. It will certainly be preceded by a mating dance performed by a male in order to attract the female to his own person.

After mating has occurred, the female lays up to two hundred eggs in one laying. Later, a dragonfly larva arises from the egg, the development of which takes a very long time, up to five years. 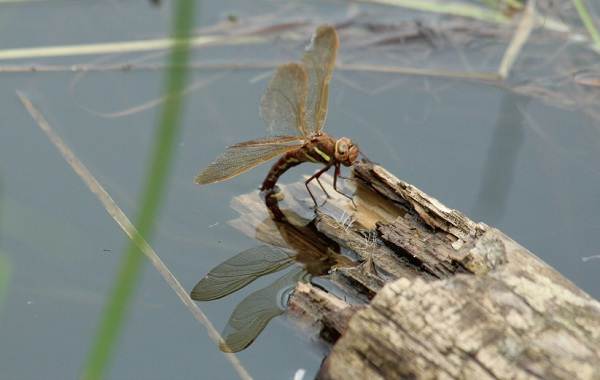 The larvae are already predators and even hunt tadpoles, although they themselves often become prey of some species of fish, so only a few of the hundreds of larvae survive.

The life span of a dragonfly reaches seven years, including all stages from the larva to the adult, which can live for about one month in the wild.

Houses of such insects do not actually start, so you can limit their observation in the natural habitat and viewing photos of dragonflies on the Internet.