Drosophila fly is a small fly that appears in places of rotting fruit. At this time, there are about 1.5 thousand species of these flies , many of which are widely used in the genetics industry. 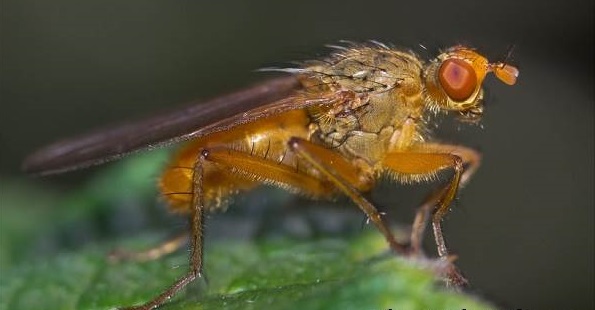 Description and features of Drosophila fly

Regarding the description of a Drosophila fly , there is nothing unusual here — this is a well-known fly with a gray or yellow-gray color, the body length of which ranges from 1.5 to 3 millimeters. The structure of the fly Drosophila completely depends on its sex. There are a number of differences between males and females of Drosophila flies of this species:

1. Females are larger — their sizes directly depend on the mode of life and feeding habits in the period in which the larvae are located;

3. The female has 8 developed upper chitin bristles of the breast. The males have only 6, with the sixth and seventh fused.

4. In the area of ​​the belly of the female there are four chitinous plates, and the male has only three.

5. The males on the first segment of the front paws have a pubic crest, in females it is absent.

Chitin setae and plates are involved in the process of flight. The eyes of the fly have a bright red color. The head is spherical in shape, very mobile. Since this type of flies belongs to dipterous, their bright feature is the presence of the membranous form of the front pair of wings. Legs — 5-segmented. 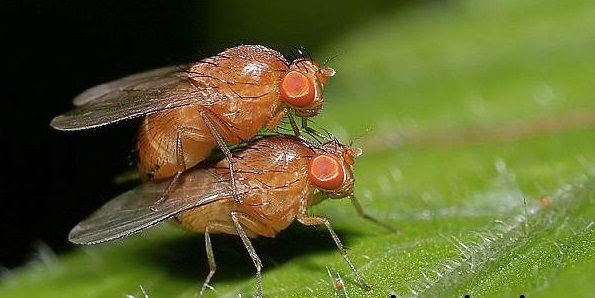 In science, this species of flies has taken a special place due to the fact that the somatic cells of the Drosophila fly contain 8 chromosomes. This number of Drosophila fly chromosomes leads to a large variety of visible mutations.

Insect is one of the most studied living organisms in the world. The genome of the Drosophila fly is fully sequenced and is widely used in genetics to study the effect of various drugs.

In addition, scientists noted that in 61% of cases, when exposed to human viruses on Drosophila fly cells, they reacted in exactly the same way as human ones.

Lifestyles and habitat of Drosophila fly

Drosophila fly lives mainly in the south of Russia, in gardens or vineyards, where people practically do not put efforts to fight it. Widely distributed in Turkey, Egypt, Brazil. In winter, this insect prefers to settle in people’s habitats, closer to fruit warehouses or fruit juice manufacturing plants. 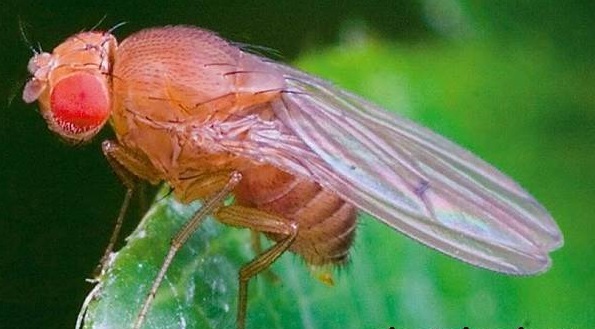 They enter houses or apartments, either together with fruits brought from southern countries, or settle in a trash can or on indoor flowers. Many people wonder how the flies entered the house if there were no rotten fruits and vegetables.

The answer is simple — adults lay eggs on vegetables and fruits during their growth. Then these products enter the house and at the slightest deterioration or the beginning of the fermentation process, flies are formed.

It should be noted that there are several species of this kind of flies that live in aquatic environments, and their larvae feed on eggs and larvae of other insects . Those people who are interested in how to get rid of Drosophila fly should use any of the four methods available today: 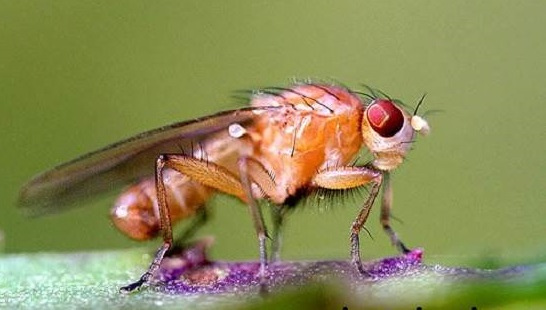 Today, there are 1,529 species of flies from the Drosophil family. Some of them are presented below.

1. Drosophila black. It is the most studied of the whole family of these flies. It has a yellow or brown color. The eyes are bright red. Body sizes range from 2 to 3 millimeters.

The larvae of the fly Drosophila of this species are white, but as they increase they change their color. The females on the belly are dark stripes, while the males have one dark spot. During life, the female is able to lay about 300 eggs.

On the photo of black fruit flies

2. Drosophila fruit. They feed mainly on sap from fruit plants, the larvae eat microorganisms. The size of the chest varies from 2.5 to 3.5 millimeters. Wingspan is 5-6 millimeters. The central part of the back has a yellowish-brown color, the belly is yellow with brown impregnations and the chest is brownish-yellow or completely yellow.

The eyes are bright red. The males of this species have a small black spot at the bottom of the wings. The development of an individual occurs in the period from 9 to 27 days, during one season of the year about 13 generations grow. Females of this species are much larger than males. 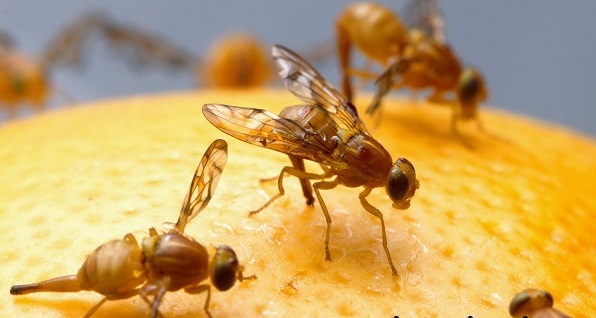 In the photo fruit drosophila

3. Drosophila is not flying. Among other individuals, they are distinguished by their inability to fly because they have underdeveloped wings and are able to crawl or jump. This species was obtained not by natural means, but as a result of crossing Drosophila flies of other species.

It is allocated with larger sizes, about 3 millimeters and a longer life cycle — it can reach 1 month. Eat rotting fruits and vegetables. 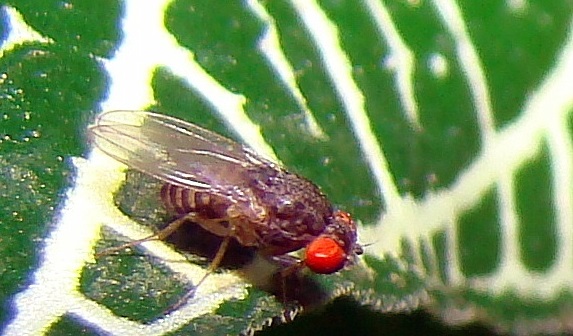 On the photo of a fruit fly not flying

4. Drosophila is large. They live in rooms where there are a lot of rotting fruits, the juice from which they eat. Sizes from 3 to 4 millimeters. Color is light or dark brown. The color of the head is yellowish-brown. 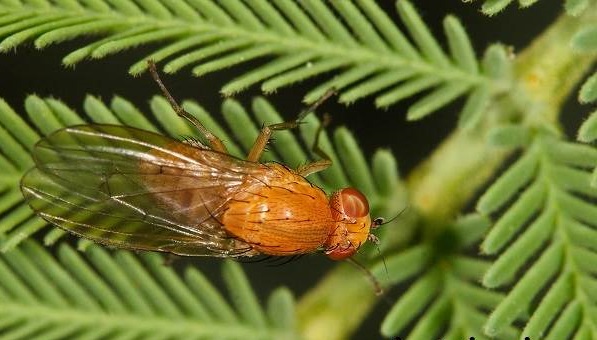 In the photo Drosophila large

The life of a little more than one month. In the process of life, females are able to lay from 100 to 150 eggs. This type of fruit flies can be found year-round. Scientists spent much more time studying the above types of flies.

These types of flies feed on a variety of vegetables and fruits, sucking the sap from the trees, but their favorite delicacy is spoiled fruit. But it all depends on the type of fly.

For example, fruit flies do not have a strictly specialized structure of the oral apparatus, so they can use free liquids of various genesis:

Therefore, to avoid the appearance of flies in your home, you need to carefully monitor the cleanliness, especially if there are pets in the dwelling.

Reproduction and life expectancy of a fly Drosophila

The reproduction of the Drosophila fly , as in all dipterans, occurs in three stages:

Due to the presence of 8 chromosomes in a Drosophila fly, its larvae and eggs feel great in a semi-liquid medium. Therefore, female flies produce the laying of eggs on half-rotten fruit or other nutrient medium.

On the surface, they are held by special float chambers. The egg of this species of fly is about 0.5 millimeters in size, and when the larvae hatch, the size of the fly is already up to 3.5 millimeters in length.

In the image of the larva, the fly must be properly fed, as its dimensions and characteristics of its vital activity depend on it in the future. Immediately after their appearance, the larvae float on the surface of the nutrient medium, but only a little later they go deep and live there until the moment of pupation. 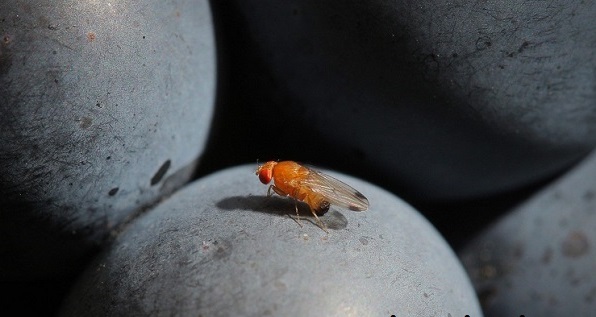 4 days after the appearance of the pupa, it produces a young fly, which reaches sexual maturity after 8 hours. On the second day after growing up, the females begin to lay new eggs and do this for the rest of their lives. As a rule, the female can lay from 50 to 80 eggs at a time.

It was noted that they tried to propagate these flies even in the laboratory, crossing males of Drosophila males with a gray body and a normal type of wings with black females that had a shortened body. As a result of this crossing, 75% of species with a gray body and ordinary wings turned out, and only 25% of them were black with short wings.

The life span of a fly is completely dependent on temperature. At a temperature of about 25 degrees, the fly is able to live 10 days, and when the temperature drops to 18 degrees, this period is doubled. In winter, flies can live for about 2.5 months.