Duck the Mandarin duck is a small bird, which is among 10 most beautiful birds in the world. It is a symbol of Chinese culture. Photo of Mandarin ducks can be found in China everywhere. It portrayed the artists of the past.

Her image was decorated with vases, paintings, panels and various interior design objects. How do the birds think of this interesting name? The first thing that comes to mind from tropical fruit Mandarin. But this version is not correct. 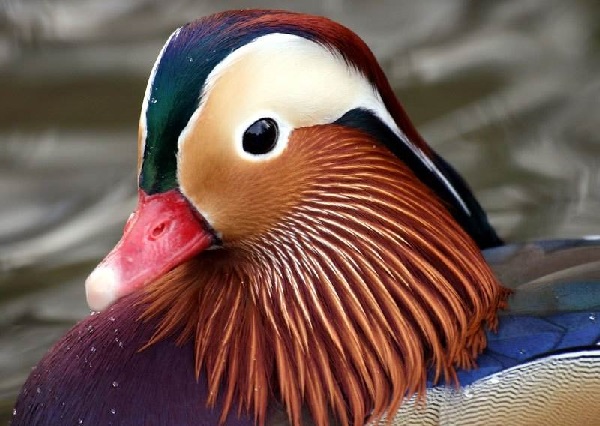 In a not very distant past in China veins of the distinguished nobleman who chose to wear bright, saturated colors. These seniors were called mandarins. In essence, the Mandarin duck has the same rich and bright colors in their plumage, like those nobles of the past, in whose honor they were named tangerines.

For several centuries these birds are the most common and beautiful animals, and decoration, artificial lakes and ponds. Sometimes these birds are called ducks of the Chinese that, in principle, with the tangerines the same thing.

This bird belongs to a duck. Judging by the description of Mandarin ducks feathered it’s small size. The weight of a duck does not exceed 700 g. the Bird is simply impossible with any confuse. She has a peculiar shape and color of plumage.

Such ducks in nature will not meet. Usually, the plumage of ducks most people pay close attention. Photo duck Mandarin duck is more reminiscent of a beautiful toy than a living creature. 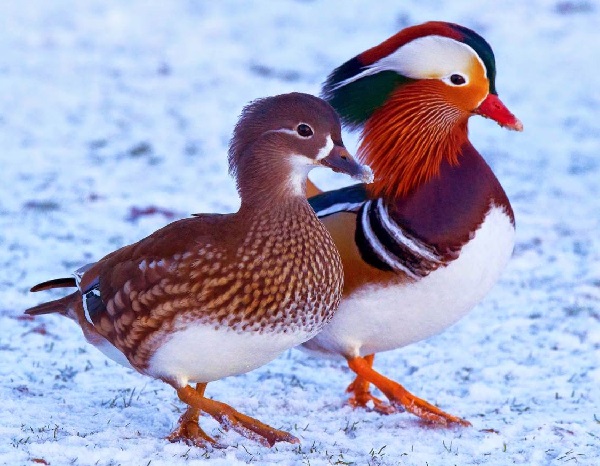 Male Mandarin ducks looks much more luxurious than the female. Bright plumage, he almost throughout the year. It is impossible to describe all its charm and beauty. Head and neck of the male is adorned with extra-long feathers that creates a kind of crest, and is strongly reminiscent of sideburns.

The wings of birds exposed feathers orange colors that resemble a fan. Floating males, these «webs» are very different, the impression that the bird is a saddle orange.

The lower part of the body of the bird is mainly white color. Thymus a part of purple shades. The tail at the top of the dark tones. Back, head and neck feathered painted vivid orange, blue, green and red colors.

It is interesting that with such a large variety of colors do not mix and have their clear boundaries. Addition to all this beauty are the red beak and orange limbs.

In the plumage of females dominated by a more modest shades to help disguise the bird in a natural environment and go unnoticed. The back is painted in brown ink, the head is gray and the bottom white. 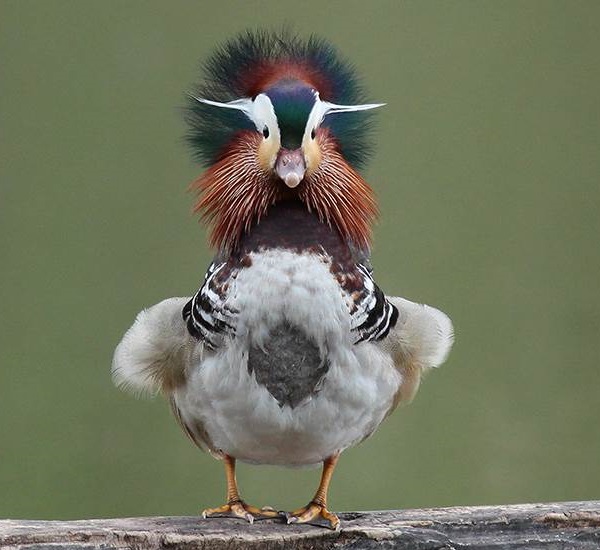 Between colors is a smooth and gradual transition. The head of the female as the male is decorated with interesting and beautiful crest. Supplements this modest picture of olive bill and orange legs.

Males and females are virtually one weight category. Their small size helps the birds to be nimble in flight. They don’t need a running start to fly. Sitting on the water or on land, birds can take off vertically. 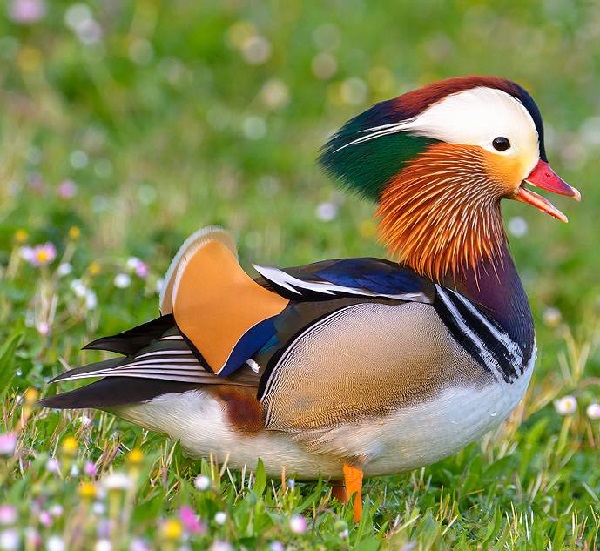 There are anomalous exception among the species of birds – white Mandarin ducks. They are white in colour and very very different from their counterparts. Proof of their kinship are the wings in the form of a saddle.

This amazing feathered can decorate any artificial reservoirs. But in the usual natural environment ducks the Mandarin after all, life is much more comfortable.

Japan, Korea and China – countries where you can meet this beauty. Ducks Mandarin ducks can enjoy the views of Russians on the territory of the Khabarovsk and Primorsky Krai, Amur region and on Sakhalin. In the winter the migration of birds from cold places in Russia to China or Japan. In warm places live sedentary Mandarin ducks. 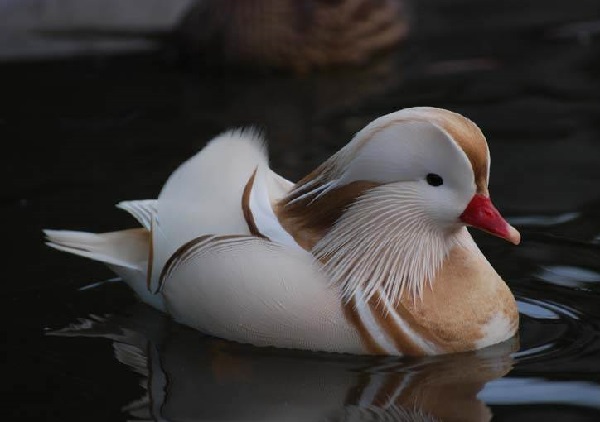 Favorite places of these birds are the reservoirs, with a growing number of them trees and piles of fallen trees. It is in such places ducks the Mandarin ducks safe and comfortable. From their relatives these birds are different and the way of nesting. They prefer tall trees. There they nest and spend most half of their free time, rest.

Duck Mandarin duck is listed in the Red book. Reducing populations of these amazing birds is due to changes in the natural environment, destruction of people familiar to these birds places of existence.

Due to the fact that currently practiced farming of these birds in a home environment, they haven’t disappeared from the face of the earth. I hope that this will never happen. Mandarin, except that fly well are able to skillfully swim. Dive they very rarely, mostly in case of injury.

These birds are timid by nature. They prefer to be in the area, from where you can easily fly or enter the water. They are incredulous. But often distrust and fearfulness of the birds disappears, and they are very easy-going with people. Moreover, Mandarin become absolutely tame birds. 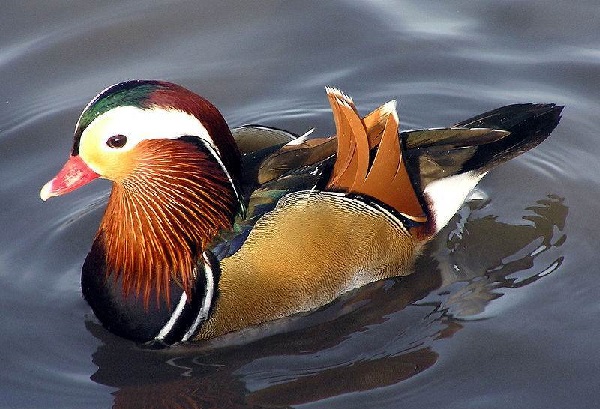 Time of active actions of these birds – morning, evening. Their activity they exhibit in search of food. All the rest of the birds prefer to rest on trees.

These birds in China, decided to give love to the newlyweds as a symbol of love and fidelity. Mandarin ducks, and swans, if you choose a mate, he mates for life. If one of the partners is something the second it happens never looking for someone else.

This divinely beautiful creature in the common cases used in the practice of Feng Shui. The Chinese believe that in a certain place the figurine of this amazing bird is able to bring the house good luck, peace and prosperity. 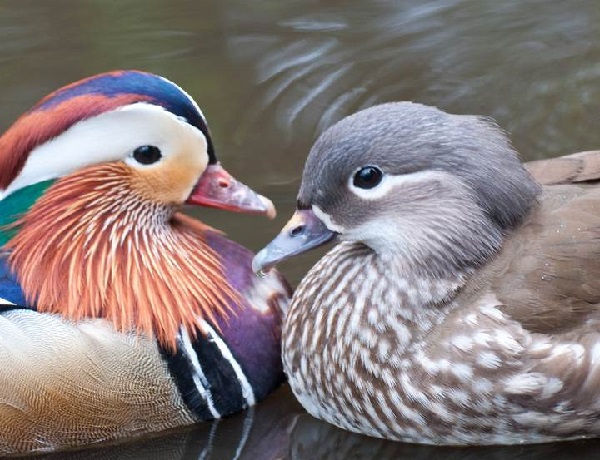 This is the only instance of duck that cannot interbreed with its other counterparts because a smaller number of chromosomes. There are still some features of these ducks from other species. Mandarin ducks do not make sounds in the form of a quack. They pose more of a whistle or a squeak.

Twice a year the birds change plumage. At this time, the males a little than differ from females. They tend to gather in large schools and hide in the Bush. For those who want to buy a duck it is important to remember that these birds live in warm countries, so the conditions for life they should be concerned.

Mandarin ducks love to eat frogs and acorns. In addition to these delicacies in their menu there are many more different dishes. Ducks can eat the seeds of plants, fish. For the production of acorns bird you have to either sit on the oak, or find them on the ground under a tree. 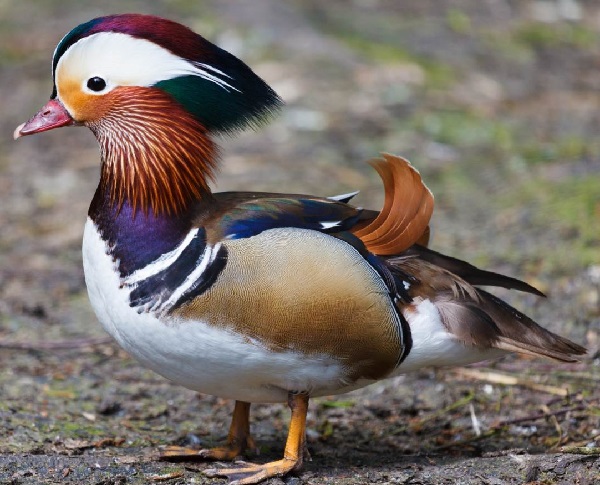 Often in the diet of birds and bugs come with snails. There are raids these beautiful birds in the fields, dotted with rice or buckwheat. These plants account for one third of the diet of Mandarin ducks.

The return of the Mandarin ducks from wintering grounds often occurs very early, when other birds don’t even think about it. Usually not all the snow melts by this time. Mandarin ducks in the mating period manifest themselves not too quiet birds. Males there are often conflicts over females, which often end in fights between them.

Usually the strongest wins. He also gets the honor of vending inseminate a female. The laying eggs of Mandarin ducks, there are usually about 12 eggs. Females lay them in nests that are no less than 6 m. 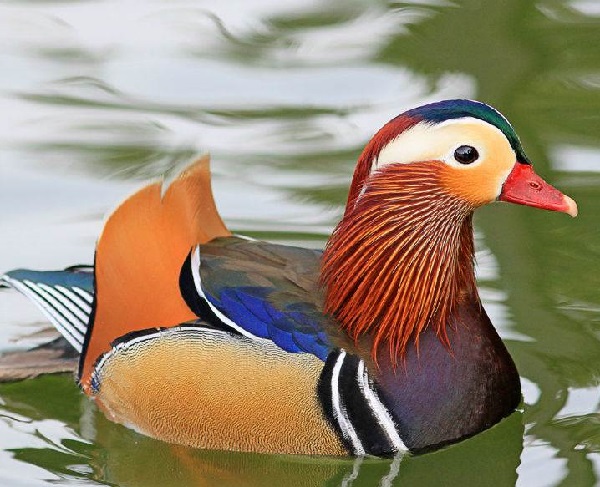 The height saves birds and their offspring from possible enemies. Planted the offspring of the female. This process lasts about a month. All this time, caring mother does not leave the nest. Care of her nutrition takes on a male.

Too much height is not a hindrance to the little Chicks that are willing to swim from the first days of existence. They actively drop from the nest with big hills to do it.

In the fall more than half of them remains alive and not maimed. The only problem with this can serve as being the next predator who will not miss the chance to profit the little ducklings of Mandarin ducks.

A mother duck carefully teaches kids how to swim and get their food. In the wild Mandarin ducks can trap a lot of dangers. The life of them lasts up to 10 years. At home, these birds can live up to 25 years.