The fauna of our planet has changed a lot over the last century. A person mercilessly reduces the number of many individuals, brings them to complete extinction, a person protects the law of many of the survivors, bringing them into the Red Book. 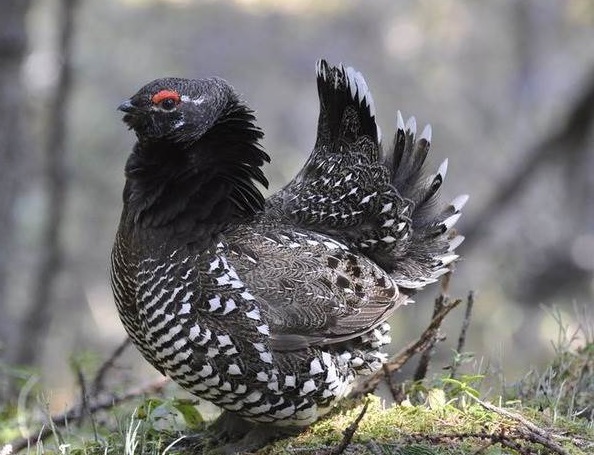 This is a vicious circle in which greed and humanity struggle. Siberian grouse bird is one of those. It is in the place of honor in the Red Book and is one of the sought-after prey for poachers.

Features and habitats of Siberian grouse

Looking at the Siberian Grouse, you can’t say that it weighs about 500-600 grams, the lush plumage visually makes it a bit larger. The length of this bird is on average 45 cm. Although the Siberian grouse has small wings, this does not prevent it from developing a good flying speed. 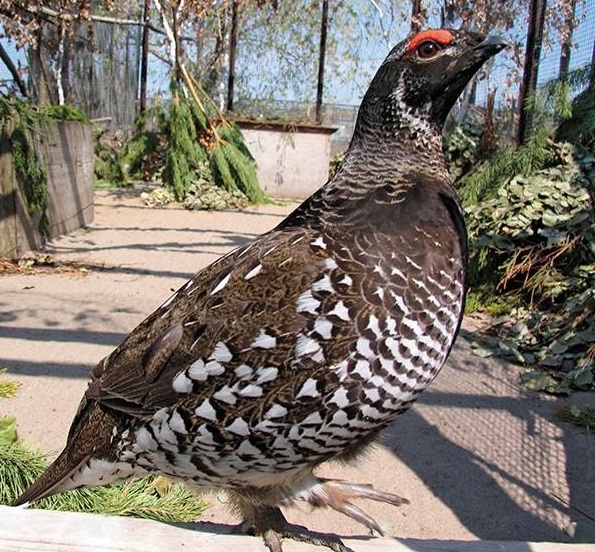 In the photo of the Falcipennis

Her legs are densely covered with down, in winter it does not allow her to freeze. Hazel grouse is slightly lighter than spruce grouse . It also has a wide range of variegated inclusions on the background of the main, dark plumage.

On it you can see red, beige, with a grayish tint, spots. Snow-white feathers are especially noticeable at the tip of the tail and wings. The contrast between the white and the dark gives the creeping bed an incredible beauty and, at the same time, protects it from enemies.

Such color makes it obscure among the branches of trees. The females have more white flecks, and the main background of the plumage is not dark chestnut, like the male, but lighter, with a reddish tinge.

The geographical population of these birds today is not as widespread as in Soviet times. Their greatest numbers are observed on the coast of the Sea of ​​Okhotsk, in the east of Transbaikalia, in the south of Yakutia.

Dikusha lives mainly in spruce forests. For her, the ideal habitat is shady meadows, which are characterized by dampness, where dense thickets of lingonberries, blueberries, cloudberries grow. For them, it is preferable to land cover, where there is a sufficient amount of dense moss. 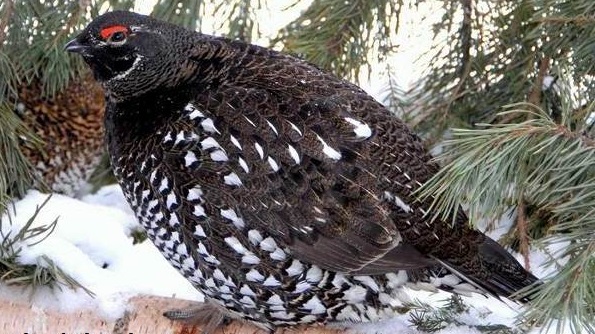 The number of grouse increased markedly in the 90s of the last century. A large number of young stock were distributed to many zoos, for example, at the Novosibirsk Zoo, and work is currently underway to increase the number of this species of bird . Unfortunately, poachers continue their work, even though wild wallah hunting is punishable by law.

Character and lifestyle of wild grouse

Dikusha likes to sit quietly on the branches of trees so that no one can see her. This bird is not shy, to her great regret. It is this factor that served the entry of the Siberian Grouse into the Red Book. Birds lead an isolated way of life, rarely gathering in flocks. Their mobility helps to be undetected in the branches of trees. Even on the branches, they settle only 2 meters from the ground.

Do not fly long distances, prefer to sit in one place. The peculiar behavior of the wild grouse lies in the fact that when frightened, when a person is found nearby, it does not fly away, but on the contrary, flies even closer and watches the person with interest. 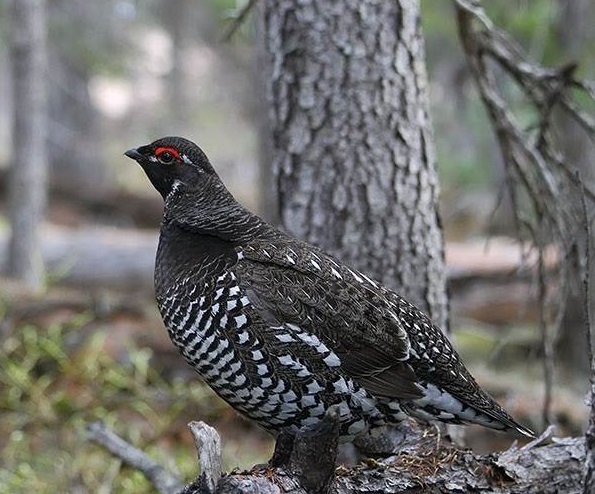 That is why Siberian grouse is easy prey for hunters , because you don’t need to spend cartridges on them. It is enough to fasten a lot of ropes and once calmly gather the individuals caught in the loops.

Even with the most dangerous alarm, grouse will not scream, scaring everyone around, and will humbly watch what is happening. The behavior of the Siberian Grouse is due to the fact that its color makes it possible to go unnoticed among the foliage of trees for quite a long time. Her patience in this does not hold, especially in the first half of the day, after all, the wild bird likes to take a nap at this time, she becomes more active after lunch.

Being a bird of the grouse family, it feeds in much the same way as the hazel grouse of Siberian grouse. The main share of products is vegetable food. Most grouse lovers needles, it is about 70% of its diet.

This preference gives her the opportunity to live a full year round. For a variety of Siberian Grouse, he feasts on raspberry, blueberry, and bilberry leaves. Sometimes birds do not neglect insects such as bugs and ants . 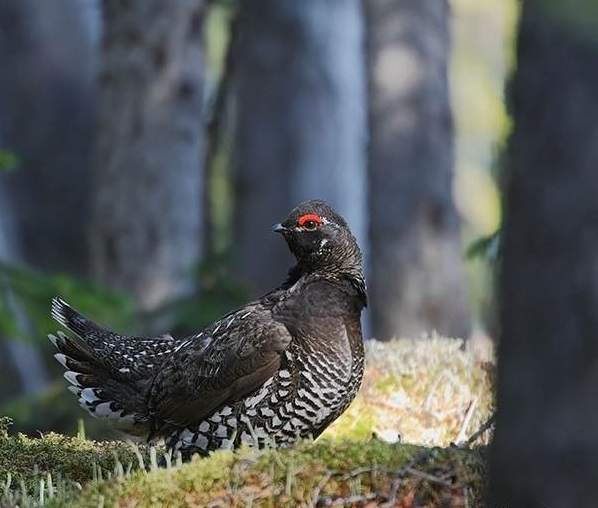 In order for the food to pass well through all the digestive systems, it is necessary for the spruce to eat small pebbles. When studying the composition of the stomach of many of the birds caught, it turned out that pebbles make up 30% of the total food composition.

Juveniles feed mainly on insects, since the growing body of chicks requires a sufficient amount of protein food. Already reaching the stage of puberty, their tastes change, and they switch to plant foods.

Pubercuffs begin puberty a year after birth, like all chickens. When it gets very warm, around the beginning of May, these birds start mating games. As a rule, the male takes all the initiative on himself and tries in every way to attract the female to him. He raises his head high up, opens the tail. He can walk, dabble in front of a female, making deaf sounds, like a wood grouse , and can fly up to her. 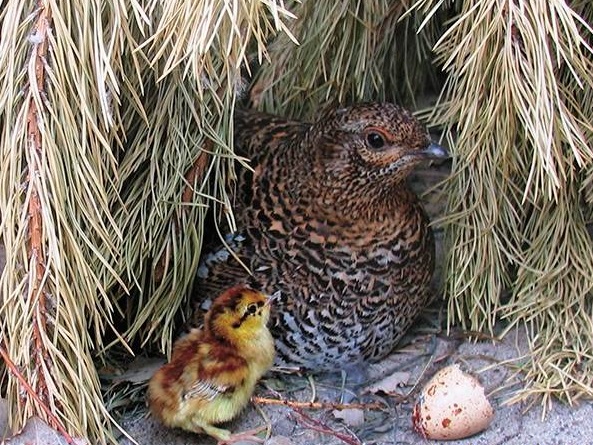 On some  photos of wild grouse you can see how the male tries to please his chosen one. His whole appearance at this time suggests that the male is hard at work. With reddened eyes, he tries not to lose sight of the female, and she indifferently awaits her mission. Siberian grouses are parted, but males do not take part in the life of the brood, they only protect them.

A nest is made under a tree with a magnificent crown. Thin branches are laid directly on the ground, and in the beginning — in the middle of May the female sits on the eggs. Until now, no research has been conducted on how many exactly the female lays eggs.

But observers were able to see 8 eggs in the nest, which made it possible to assume that, on average, Siberian grouses lay about a dozen eggs. The eggs are light olive in color with dark spots. On the 24-25 day the offspring appears, the chicks begin to fly at the end of June.

Life expectancy in the wild is from 10 to 14 years. In the early 80s of the last century, scientists monitored the life span of Siberian grouses, which were transported to zoos. Unfortunately, almost all individuals died on the 10th — 20th day, first of all, because of the long transportation. 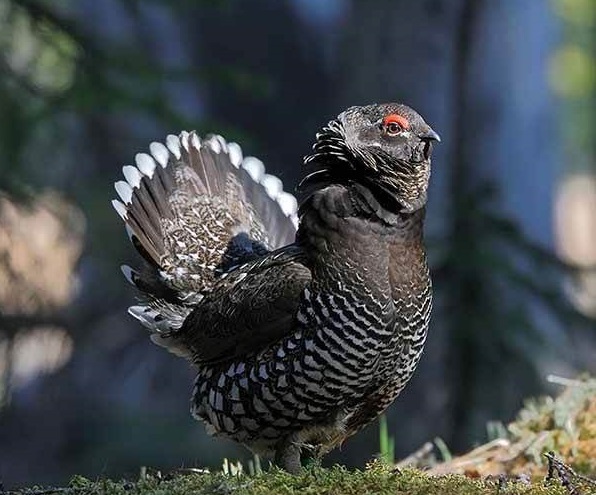 In the photo male Falcipennis

Dikusha in North America is also known under the name Canadian Siberian Grouse . It is characterized by not pointed wings and slightly lower weight (up to 50 gr.). An interesting fact about the Siberian grouse is that the meat of this bird is slightly bitter due to the fact that it eats a lot of pine needles. This fact does not prevent to hunt for it and to reduce its number every year.