Ferrets are small mammals. Animals that look like ferrets and belong to the same genus — ermines, weasels and minks. Two species live in Russia: forest ferret and steppe. The color of the forest is much darker than the steppe. Males reach 50 centimeters in length, females — 40. Tail length can be up to 20 centimeters. The ferret was used as a pet by humans 2,000 years ago. 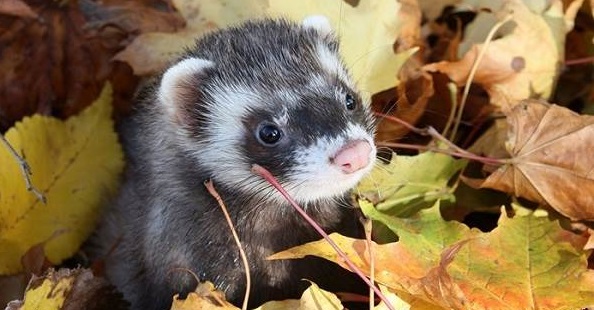 In addition to creating comfort in the house and love for his master, the ferret also helped him in the hunt. A special character trait is a non-aggressive disposition. The main instinct of the ferret animal is the desire to burrow, since in the wild, the mammal lives in a burrow. The ferret rarely makes any sounds. During a hunt they can make a sound that resembles a cluck.

Listen to the voice of a ferret

Sometimes gentle cooing is heard between mother and baby. The sound that a ferret denotes negative emotions is like a hiss. 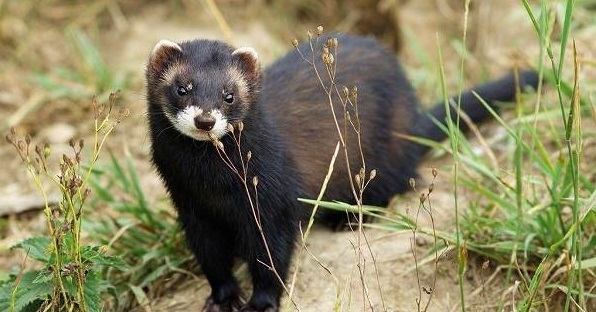 In the photo forest ferret

Character and way of life ferret

Ferrets are predatory animals. They prefer to live on the forest edges, near water bodies, in the steppes. Periodically there are wild ferrets in human settlements. All ferrets are night beasts that wake up when the sun sets. This little cute animal is a very scary hunter who is not afraid even of snakes and birds that make up half of its size.

The ferret lives in a burrow, hiding the entrance to it under stumps or shrubs. In winter, forest and steppe residents often move closer to human settlements, and may even settle down firmly in a cellar or shed. This behavior is due to the search for a source of heat, as well as the presence of a large amount of food in people. 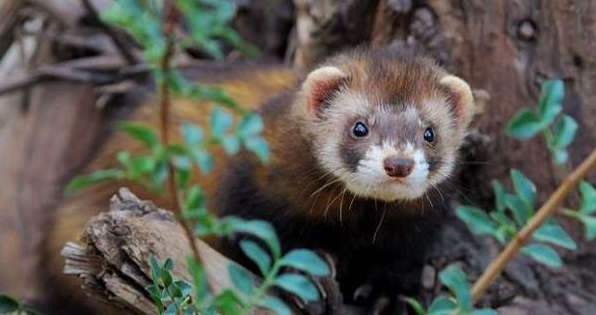 However, a wild ferret is such an animal that can be useful to a person, because if he settled in a shed or cellar, he will catch the rest of the rodents, but he doesn’t touch human food.

With the arrival of heat ferret sent back to the forest. This hunter has many enemies — any other predatory animals and birds. In case of danger, the ferret emits a fetid odor that drives away the enemy.

Ferrets eat only animal food. He can hunt any bird, rodent or amphibian that can master. This mammal is nimble enough to catch any small and fast prey. They can dig out rodents and lizards from their holes. Large individuals can catch and catch even an adult hare. 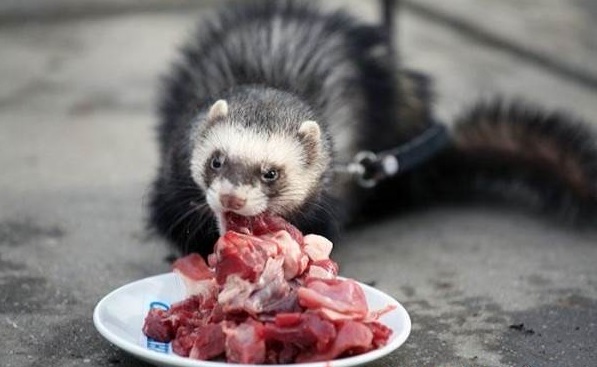 It is difficult to tame forest and steppe wild animals, it is not worth doing this. However, specially raised or young ferrets easily tame and feel good in captivity. Reviews of the animal ferret as a domestic resident are mostly positive.

At home, of course, it’s impossible to satisfy the ferret’s natural need for hunting. The diet of the ferret at home consists of dry food or natural food. You can feed it with poultry meat, eggs, fish.

Feeding occurs 2 times a day. Plant food can not be added, because in wildlife, they do not eat it. Dairy products are also not advised to give a ferret, because the stomach of the beast is not used to them, the only exception can be cottage cheese. 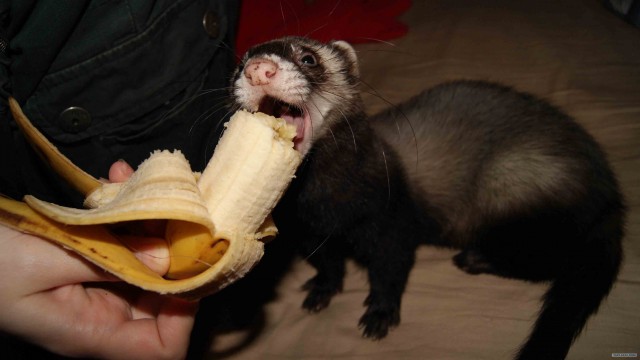 In reviews of the animal the ferret is often mentioned a special stuffing, that is, meat or poultry organs with cereals and vegetables are ground in a meat grinder and mixed. The resulting product of animals fed at home. However, some experts advise at home to feed the ferret with animal food, for example, small rodents.

Dry food, prepared specifically for ferrets, already contain all the necessary elements. In addition, dry food is much more convenient to use. Of course, some dry food is much more expensive than natural food. For a domestic ferret, a combination of dry and animal feed may be suitable food.

In a photo of a ferret animal, as in life, it is often difficult to determine its age, but experienced breeders are well aware of which individuals are ready to continue the race. 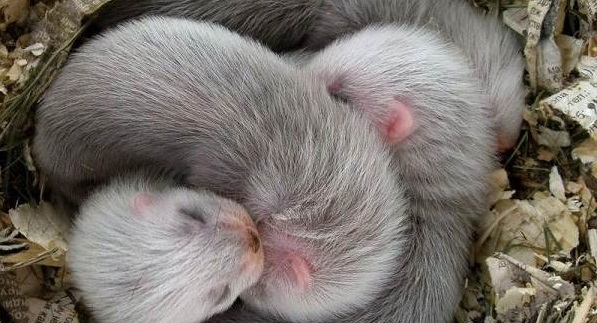 In the photo the young ferret

The mating process is quite noisy, the male can care for the female, but more often he unceremoniously grabs her by the neck and drags her to her favorite place. The female tries to break out, hisses, but the male is usually bigger and stronger, therefore all her attempts are in vain. It may seem that animals are fighting violently.

The bites of the sharp teeth of the male and the peeled withers are the usual signs of recent mating in ferrets. You can buy a ferret in a specialized store, while the price of an animal ferret can vary depending on its age and characteristics. 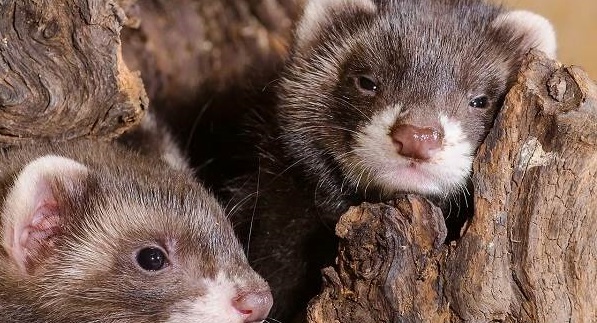 In the spring, animals have enlarged gonads, they are ready for the mating process. Males can pester any females, not even walking. Usually the offspring consists of 10-12 babies, but it all depends on the time of mating.

If the process happens too early, only 2-3 babies can appear, if it is too late, not one. The sides of the females during pregnancy become rounded, the belly and nipples swell. Most often the birth occurs once a year, the male does not participate in the upbringing of the children, but the female feeds and cares for them for many more weeks.

Feeding takes place in a very interesting way — the female puts the cubs very close to each other and rolls up around them so that they can be placed near the nipples. The little ferret weighs only about 5 grams, and its length is 4 centimeters. 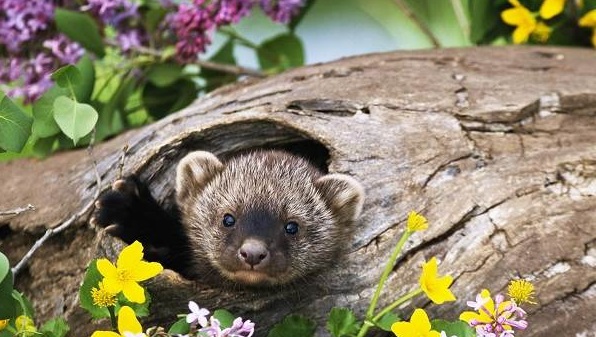 About three weeks they eat only mother’s milk, then babies can be fed. Top dressing is carried out gradually — you need to start with one spoon of minced meat or feed per day, after a while, increase the number to several spoons.

At the age of one month, babies grow to 150 grams and 20 centimeters. Only in 35-40 days they open their eyes. The lifespan of ferrets is 8 — 10 years. Of course, this figure can be significantly less if the ferret lives in an unfavorable environment in the wild, and in the house does not receive proper care and nutrition.