The flying dog is an amazing and mysterious creature about which many legends and myths are composed. These animals for many centuries accumulated their dark glory. 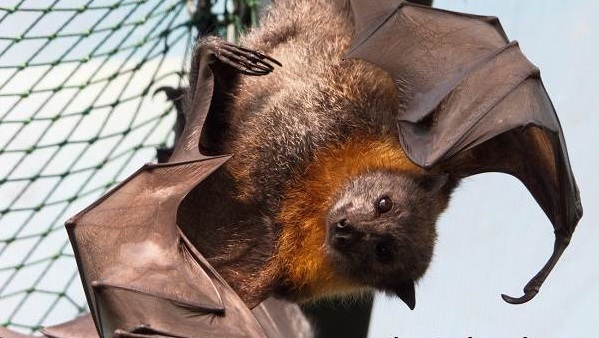 For example, the Scots were confident that when these creatures suddenly take off, the hour of the witches comes. In Oskfordshire there is a belief that if a bat makes three circles over a house, this means that someone will die in the house in a short time. If you drop all superstitions and look at the world through the eyes of science, it becomes clear that the wings are the most important element of the ecosystem.

Peculiarities and habitat of a flying dog

Looking at the photo of a flying dog we can assume that it is a type of bat . But, despite the striking similarities, it is not. Just like bats, a wing can fly almost silently, and during the daytime they prefer to hang upside down on the roof of a house or tree, wrapping their body in wide membranes. 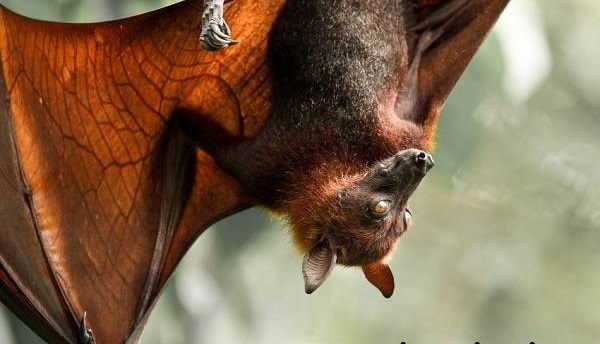 If the air temperature is too high, the pteropter can fan the webbed like a fan. During the night, flying dogs are able to overcome about a hundred kilometers. However, the main difference between the bat from bats is that it does not have a special radar that allows you to hunt at night and perfectly navigate the terrain.

Only foxes, whose habitats are caves, have a kind of echo sounder, when flying, they click the tongue. Bats are able to emit ultrasonic signals due to vocal cords having a specific structure. 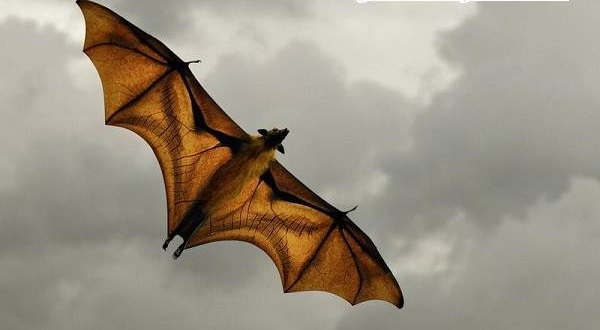 Other types of volatile dogs orient themselves on the terrain exclusively with the help of organs of sight, smell, and touch. In addition, outwardly, the wings still more resemble dogs or foxes . The flying dog is a mammal, the detachment — the chiropterans, the family of the wing.

The Egyptian flying dog is widespread in Egypt, on the Arabian Peninsula, in Turkey and on the island of Cyprus. Flying dogs live in India. There are also a lot of wings on the island of Mauritius, in West Africa, in the Philippines, on the islands of Oceania.

It is home to the largest breed of flying dog , called kalong (its length is about 40 cm, and its forearm is 22 cm). The meat of this flying dog is considered very nutritious. 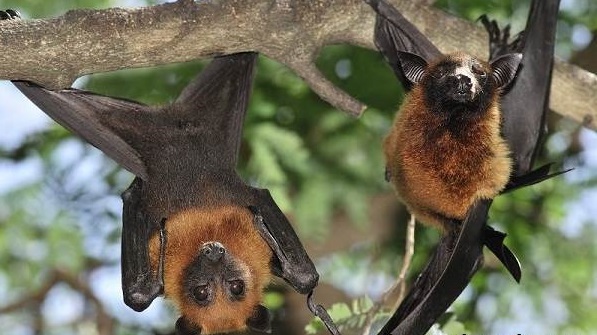 Locals catch them and sell them in the markets. Kalongi can cause significant damage to fruit plantations. Also, the flying dog lives in the Nile Valley, in Syria, in Iran and in Japan. The dwarf krylan is the smallest flying dog, its body is only 6-7 cm in length, and the forearm is 25 cm. It is harmless and lives in Indochina and Burma.

Description of a flying dog, character and lifestyle

A flying dog mammal is distinguished by a long, slightly pointed muzzle, has small ears and claws on the forefingers’ index fingers, the tail is short or missing. Flying foxes are characterized by a nocturnal lifestyle.

During the day, they prefer to hang upside down on a tree that they have chosen as their home and sleep. Often they hang on one paw, wrapping themselves with another wing, and in the heat they fan their wings. They may fly away for dozens of kilometers in search of food, but they return to sleep on the same tree. 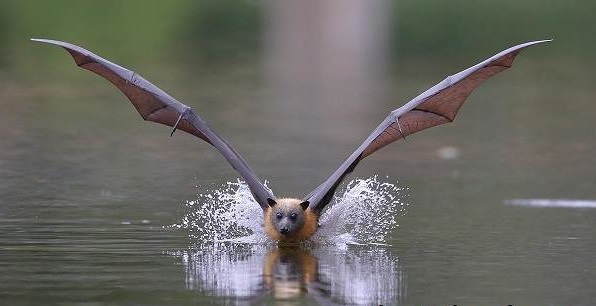 There are such types of volatile dogs: 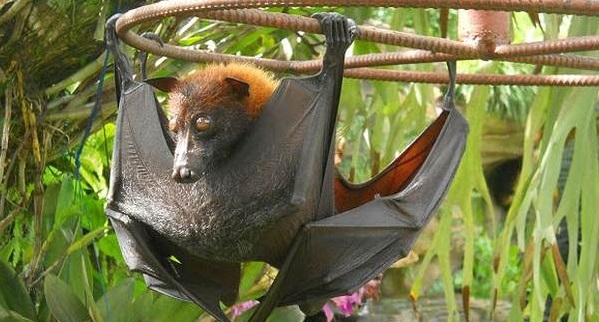 Most often, sleeping dogs return to the same tree

Wings find food with a fairly well developed vision and smell. Most of them feed on the fruits of trees growing in the tropics. As a rule, they eat in their permanent posture, that is, hanging on a branch, hooking with one leg, or tearing fruit from the trees right on the fly. They eat both the very pulp of the fruit, and pull the juice out of them.

Small flying dogs drink floral nectar and suck the pollen. In addition to everything, the trumpet-eyed wing of the moth eats also insects. Flying foxes love water, and sometimes even drink sea salt water to restore the body’s water-salt balance. 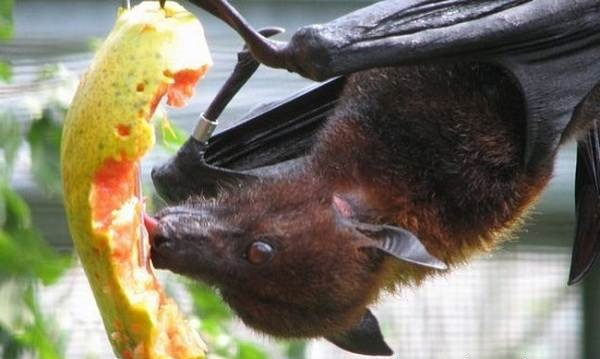 Breeding a flying dog and its lifespan

The breeding starts from mid-summer to October. The female beetles give offspring once a year. Usually they produce one baby, much less often two. They carry babies for about 115 — 120 days.

Females give birth, hanging upside down. In this case, the female closes the wings, resulting in a cradle, where the newborn enters. Mats are mammals. Immediately after birth, babies climb onto the mother’s breast and cling to the nipple. From this point on, the mother carries the cub on itself until it learns to fly.

Newborn flying dogs are born immediately with a woolen cover and sighted. The female feeds the young with milk before they reach the age of three months. As soon as the babies grow up, the mother begins to take them with them to get food. 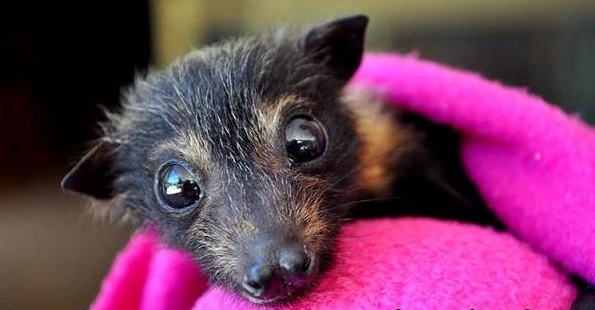 In the photo of a flying dog cub

In order for the young, who are still poorly oriented in space, mothers do not get lost, they give them signals through ultrasound. Volatile dogs reach sexual maturity at the age of 9 months.

Regarding the life expectancy of volatile dogs contains quite a bit of information. Of course, in natural conditions, the Wats live much less than if they were born or raised in captivity. According to some reports, they live only 7-8 years.

At home, they can live 17-20 years. Record today — 25 years. Krylan are the most important element of the established ecosystem. They promote the spread of plant seeds, help pollinate plants (baobab, sausage tree). 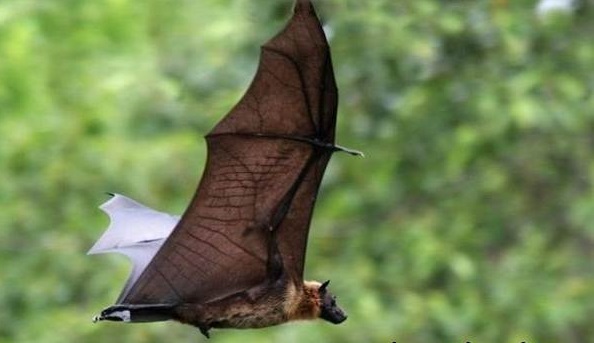 However, despite this invaluable benefit of the Krylan, they can cause significant damage to the plantations. Because of this, people exterminate these interesting animals. Some locals eat krylan meat. As a result, their population is declining every year.

Currently, many countries are already beginning to hold events in order to preserve this species of mammals. Not so long ago, the Krylan became domesticated. Their cute faces and good character of many people can not leave indifferent. Now it is very fashionable and prestigious to keep a flying dog at home.

Another negative side of these animals is that, according to the latest data, they are carriers of viruses. For example, the Ebola virus and the Marburg virus. In both cases, the carriers of the virus were cave wings from Gabon and Congo, respectively.