Ganga gavial is   a rather large crocodile representing the gavial family. The most obvious difference between gavial and other crocodile ones is a very narrow and long muzzle.

At birth, small gavials are not very different from ordinary crocodiles . Usually the width of the nose is two to three times the length. However, with age, the mouth of the gavial is drawn out more and more and becomes very narrow.

In the photographs of the gavial, you can see that inside its mouth there is a series of very long and sharp teeth that grow at a slight inclination so that it is more convenient for it to hold and eat the prey.

Before on the face, the males are greatly expanded, there is something like an appendage on it, consisting entirely of soft tissues. For some reason, this very outgrowth reminds people of an Indian clay pot — ghara. This is what gave the name to the whole family: Cavial — the spoiled “ghVerdana”.

The body length of gavial males can reach six meters, and the weight sometimes reaches two hundred kilograms, but, despite its impressive size, the gavial crocodiles have never attacked a person. 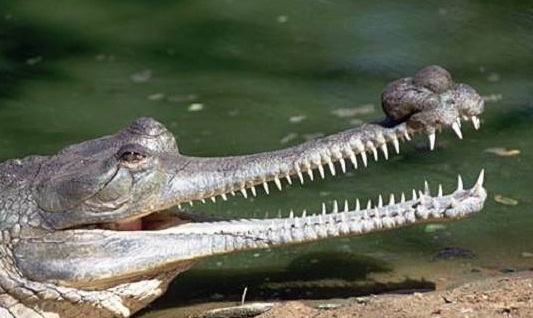 Females are much inferior in size — almost half the size of males. The color of the back of gavialov is dark green with brown shades, and the belly, on the contrary, is very light and yellowish.

The legs of gavials are very poorly developed, because of this he moves with great difficulty and extremely awkwardly on land, and certainly never hunts her. However, in spite of this, crocodiles are chosen quite often on the beach — this usually happens with the aim of warming up in the sun and warm sand, or during the breeding season.

The awkwardness of gavial on land is more than adequately compensated by its grace and speed of movement in water. If among the crocodile speed competitions were held in swimming, the gavials would definitely become applicants for gold.

Features and habitat of gavial

So where does this amazing and interesting beast — gavial live ? Gavialy inhabit the deep rivers of Hindustan, Bangladesh, Nepal, India , Pakistan. They were also seen in Myanmar and Bhutan, but their numbers in the area are so small that individuals can literally be counted on the fingers. Choosing deep and not shallow rivers, gavial crocodiles are looking for a place with the most fish. 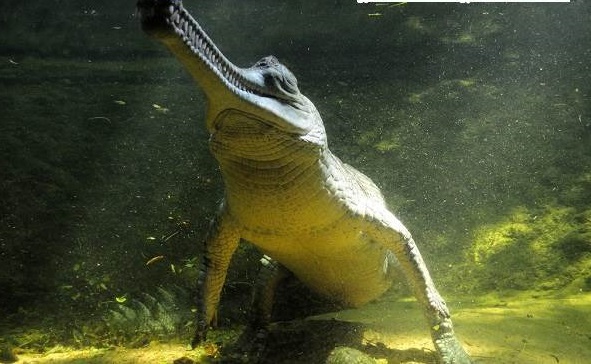 Character and lifestyle of gaviala

Gavials live in families — a small harem of several females falls on one male. And, like many crocodile, gavials are an excellent example of parental dedication.

Mothers are especially different in this case, from the very beginning of the mating season, guarding their own nests and not leaving the children until the babies become completely independent.

Gavialy are not strongly aggressive creatures. However, an exception for them may be situations in the struggle for the attention of females in the mating season or the division of territories. The territory of the male, by the way, is more than extensive — from twelve to twenty kilometers. 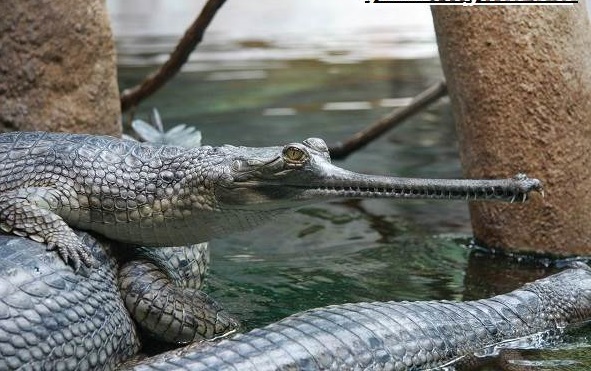 As you probably already understood, gavial cannot afford to hunt any large animals. The basis of the diet of an adult gavial is fish , occasionally water snakes , birds are small mammals. Juveniles feed on various invertebrates and frogs.

Often, human remains and sometimes even jewels are found in the stomachs of dead gavials. But to explain it is quite simple — these wonderful crocodiles do not disdain to eat corpses burned or buried in rivers and at their banks.

Gavialy become sexually mature by their ten years. Unfortunately, the overwhelming majority (ninety-eight percent) of gavial crocodiles die before reaching even three years. The marriage period begins in November and ends only at the end of January. 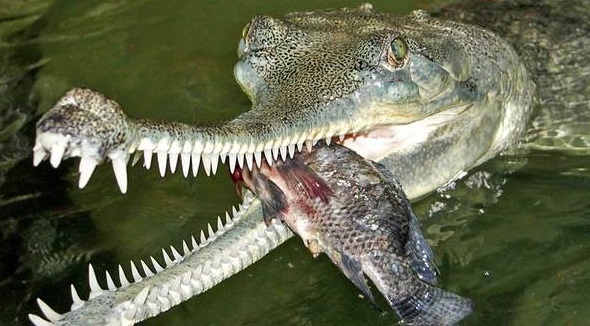 First, the males pick up females for their harem. Often there are clashes and battles for the lady. The larger and stronger the male — the more females in his harem. Between fertilization and egg laying, it takes about three to four months.

At this time, the female pulls out the ideal nest for her babies at a distance of three to five meters from the water’s edge and lays there from thirty to sixty eggs. The weight of one egg can reach 160 grams, which is significantly more than other crocodile relatives. After this, the nest is masked — buried or covered with plant material.

After two and a half months, small gavialchiki are selected on the light. The female does not transfer the babies to the water, but takes care of them for the first month, teaching them everything necessary for survival. The official life expectancy of gavialov is 28 years, but, due to poachers, it is almost impossible to achieve this figure. 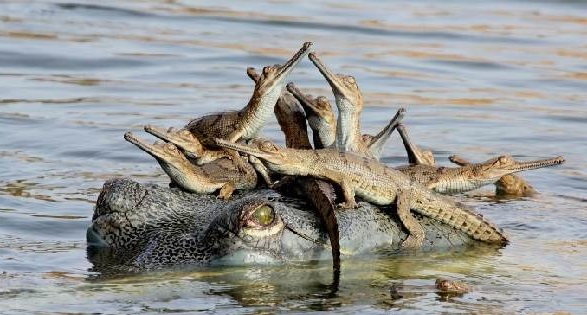 In the photo are young gavialas.

Animals gavialy presented in the international red book. So their global population was affected by the global pollution of the rivers, the drainage, the destruction of their habitats. The stocks of food suitable for them are noticeably decreasing every day, and therefore the number of gavials themselves inexorably approaches zero.

In addition to natural factors, gavials often become victims of poachers who hunt for growths with the nose of males, as well as for eggs of crocodiles. Eggs gavialov used to treat certain diseases, and growths from the nose, judging by the imprints of local tribes, are very helpful to men to cope with their own potency.

In the seventies of the last century in India (and a little later in Nepal itself) a government project was adopted on the methods and method of preserving the gavial population. 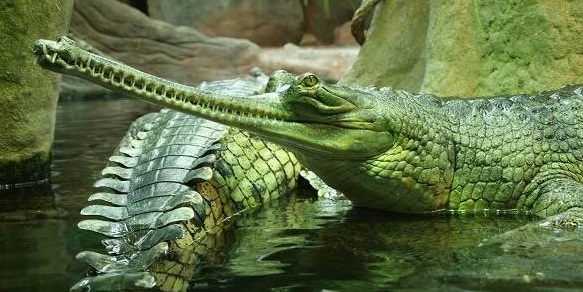 Thanks to this legislative innovation, several crocodile farms specializing in the cultivation of gavials were discovered. Thanks to this action, since then the population of crocodiles has increased almost 20 times.

Special indicators were provided based on the results of work in the Royal-Chitavan National Park, where, at the confluence of two rivers, Rapti and Rue, they are trying to maintain ideal conditions for life and breeding of the Ganja gavial and the swamp crocodile. Projections for the chances of recovering this type of crocodile are very optimistic.