Description and features of the gecko

A gecko (from the Latin Gekkonidae) or a cynopal is a family of medium-sized and small-sized vertebrate lizards . The length of the body depends on its age and type, so the size of the dwarf gecko is no more than 5 centimeters, and the length of one of the largest species of gecko currents can reach up to 35 centimeters. 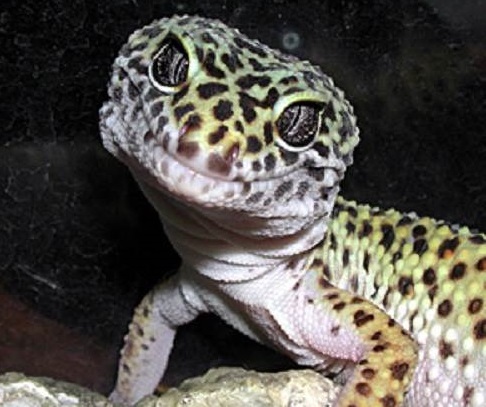 This family is very extensive and consists of more than 900 known species, which are combined in 52 genera. Distinctive features of geckos are the structure of their vertebrae, namely they are biconcave. Individuals have large eyes, covered with a transparent fixed shell, without eyelids. The language of this family is wide with a small split in front and has many nipples on its surface. 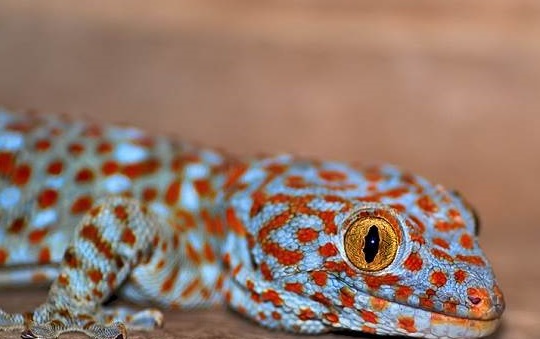 The color of various species of geckos is very diverse, in most cases bright with pigmentation in the form of stripes and dots, but at the same time it has an excellent masking effect in the habitat of a particular gecko lizard.

The brightness of the skin is very diverse, attractive and beautiful, so the industrialists began to make toy geckos for children. In our country, the most common are the collection of toy figures of geckos maxi.

The structure of the legs of the entire family of geckos deserves special attention. The extremities of these reptiles end evenly splayed feet, which have five fingers. The fingers themselves on the inside are small combs, covered with the finest bristles with a diameter of about 100 nm. 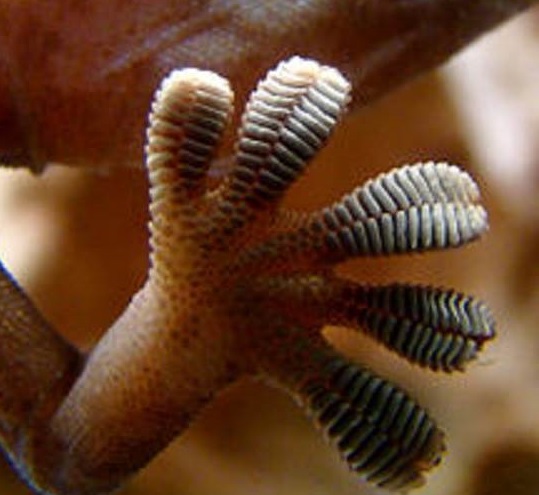 On the photo is a gecko’s paw.

The tips of these bristles (hairs) have the shape of a triangle, something like a plunger, and they attach themselves to any surface, including a completely flat one, due to the van der Waals forces of intermolecular interaction.

If it is simpler to say, these hairs are very thin, elastic and grow like a dense paling, so they can easily bend, adapting to the relief of a hard surface, and even the smoothest surface can have its roughness upon more detailed examination using a multiple electron microscope.

In this regard, the gecko can easily move on a vertical surface and even on the ceiling. This species of individuals can change the angle between the hairs and the surface, and there is detachment from the solid body (up to fifteen times per second), thus, the lizards can move very quickly. Another feature of the structure of the gecko’s paws is their ability to self-purification, which allows the sticking effect to work without any particular difficulties.

The habitat of gecko lizards is distributed almost throughout the world, but most species prefer to live in the subtropical and tropical zones of our planet because they are very heat-loving reptiles and their normal habitat is + 20-30 ° C.

Although some species prefer to live in the mountains and even hot deserts. So, for example, the Madagascar gecko lives near Africa on the fourth largest island of the world, Madagascar , where the daily air temperature throughout the year never falls below + 25 ° C. 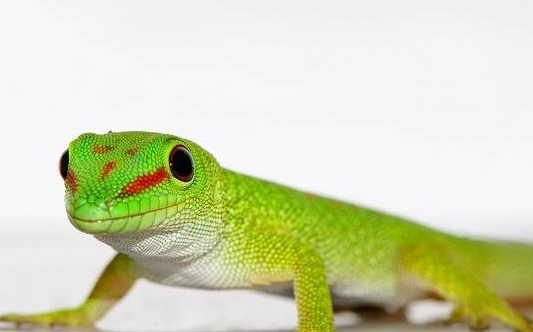 In the photo the Madagascar gecko

Excellent geckos have adapted to live at home in ordinary apartments. They are quite unpretentious and do not require any specific conditions and expensive equipment for their maintenance.

In the simplest version, a terrarium (possibly a simple aquarium) is desirable for keeping a gecko in the apartment, preferably with lighting, soil (depending on the type of gecko, there may be stones, pebbles, sawdust, moss, etc.), for forest species — plants.

In the global network there are a lot of tips and articles with attached videos and photos of geckos of various kinds, with the help of which it is quite easy to understand the simple intricacies of keeping these reptiles in an apartment. Also a lot of books and manuals about geckos are written.

In feeding, most species of geckos are quite unpretentious. The basis of their diet are insects, small invertebrates and small vertebrates. Some species eat plants and fruits. For example, the leopard gecko feeds only on live food, that is, insects, worms, small vertebrates (small mice) and do not like to eat fruits and vegetables at all. 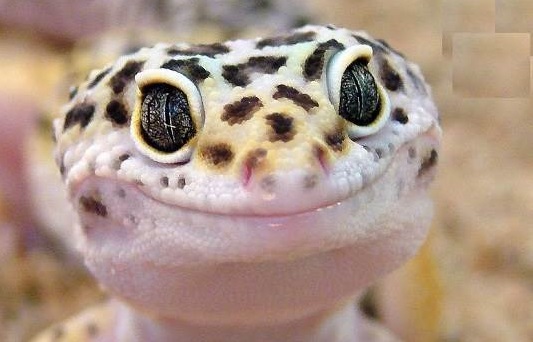 In the diet of any type of gecko a very important component is the balance of food and a moderate content of vitamins and minerals in it. At home, geckos need to be fed no more than twice a week and it is necessary that they have a constant supply of water, which they dispense to drink on their own.

Geckos can not be overfed because they become large, difficult and reluctant to move, which in turn leads to the development of various diseases, loss of reproductive functions and often the death of a reptile.

Most geckos are egg-laying reptiles, with the exception of a few species, such as banana-eating geckos, New Zealand green geckos, and the live-bearing New Zealand geckos, which are egg-breeding. 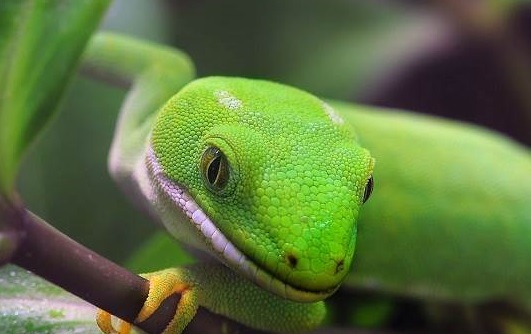 On the photo is a green gecko

In most cases, the possibility of fertilization in geckos occurs from the age of life. The mating period in most species falls in late winter and early spring. The mating process takes place as follows: the female ready for fertilization makes soft sounds, as if calling the male, when the male responds, the female slowly starts to run away from him, the lizard catches up with her jaws behind the neck, and then the stage of fertilization takes place, after which the gecko male is removed .

Females lay eggs, usually laying 3-5 eggs. Small geckos hatch, depending on the surrounding climate and temperature of the environment, in a period of 50-100 days. The above figures can vary greatly depending on the type of gecko. So, for example, the gecko zhonefar enters puberty in 2-3 years of its life, females lay 3-5 eggs at intervals of one month and the incubation period is 45-60 days. 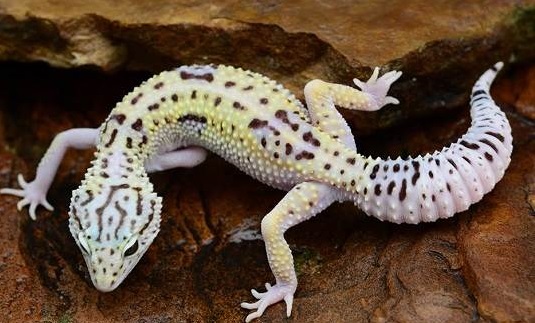 In the photo the Iranian gecko

Depending on the type, size, environment and habitat conditions, the life span of geckos varies from 5 to 25 years. An interesting fact in the life expectancy of these lizards is that more long-livers are recorded from individuals living in captivity in terrariums, including domestic geckos .

Due to the great popularity of keeping and breeding geckos in the form of domestic reptiles, many pet stores have the opportunity to buy a gecko and all the equipment necessary for its habitation in an apartment or own house.

The price of an individual gecko depends on its type, popularity, age, size and can vary on average between 5-7 thousand rubles. More rare types can also be bought very simply, but in such cases you will have to pay 20-30 thousand rubles already. 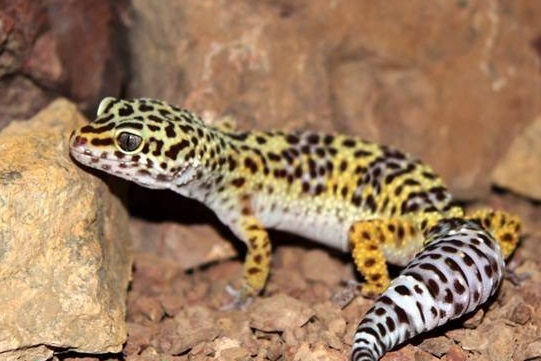 Equipment for keeping a gecko at home has a more extended price range and depends only on the financial capabilities of the future owner, but in the simplest version, all the necessary kit will cost no more than 10 thousand rubles, of which more than half will cost a small terrarium.